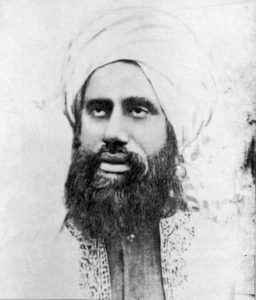 Hazrat Maulvi Haji Hakim Noor al-Din was the first person who took the pledge of allegiance at the hand of the Promised Messiah(as). Hazrat Ahmad(as) called him the most beloved, the most sincere, and the most truthful friend. Calling his sacrifices worthy of praise, Promised Messiah(as) stated that he stood above all of his followers because of his sincerity, love, and total dedication.

Hazrat Maulana’s hometown was Bhera, in district Sargodha, Pakistan, where he was born around 1841. His father’s name was Hazrat Hafiz Ghulam Rasool Qureshi and Noor Bakhat was his mother’s name. He was a direct descendant of Hazrat Umar bin al-Khattab(ra), the second Caliph of Islam.

His forefathers migrated from Medina and settled in Afghanistan. From his mothers side he was a descendant of Hazrat Ali(ra), the fourth Caliph of Islam. He belonged to a scholarly and pious family that was immersed in the study of the Holy Quran. There had been Hafize Quran in his family for the last eleven generations. He learnt the Holy Quran from his mother. In sports he loved swimming and horseback riding.

In 1858 he traveled to Rawalpindi to study for the diploma of education at Normal School. He passed his diploma examination with such distinction that he was appointed principal of a school at the age of twenty-one. He resigned from this job after four years in order to seek more knowledge.

His thirst for knowledge was unquenchable so that he traveled to various cities like Lahore, Rampur, Dehli, Lucknow, and Bhopal for the purpose of obtaining religious instruction. In those days his trust in Allah the Exalted was such that he never cared for his financial or accommodation needs. God Almighty fulfilled all his needs miraculously. He received his religious as well medical instruction in these cities from first-rate physicians & scholars.

While in Bhopal he earned a lot of money from his medical practice, which enabled to him travel to Saudi Arabia for pilgrimage.