Now we end the blessed era of the first Caliphate to the Second Caliphate. It is vital to briefly describe the life of Hazrat Khalifat al-Masih the Second before his election as the Caliph. 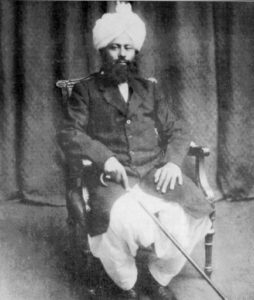 Hazrat Mirza Bashiruddin Mahmud Ahmad, Khalifat al-Masih the Second, was born on January 12th, 1889 on a Saturday at Qadian. He was the eldest son of the Promised Messiah(as), born from his second wife, Hazrat Sayyeda Nusrat Jahan Begum(ra). He completed the first reading of the Holy Quran on June 7th, 1897.

His blessed birth was in fulfillment of a prophecy by the Holy Prophet of Islam, peace & blessings of Allah be on him. According to this prophecy the Promised Messiah would marry and would be blessed with children. Also his birth was in fulfillment of a magnificent prophecy of Hazrat Ahmad, peace be on him. This particular prophecy is referred to in our Community as the ‘Prohecy of al-Musleh Mauood’ which did Hazrat Ahmad make in 1886 at Hoshiarpur. God Almighty foretold him that within a period of nine years he would be blessed with a son. The characteristics of this son described in the prophecy are as follows:

“He will be characterized with grandeur, greatness, and wealth. He will come into the world and will heal many of their disorders through his messianic qualities and through the blessings of the Holy Spirit. ……..He will be extremely intelligent and understanding and will be meek of heart and will be filled with secular and spiritual knowledge…………….

We shall pour our Spirit into him and he will be sheltered under the shadow of God. He will grow rapidly in stature……………

His fame will spread to the ends of the earth and people will be blessed through him. “

All of the characteristics described in the above prophecy became evident in due course in the person of Hazrat Mirza Bashiruddin Mahmud Ahmad, the Second Caliph. In fact he was an embodiment of all the qualities enunciated in the prophecy. Praise the Lord.

In 1889 Hazrat Ahmad(as) published a pamphlet to announce the birth of his son and to set out ten conditions of Baiat. A short while later Hazrat Ahmad took the first pledge of allegiance at Ludhiana. It seemed as though God Almighty had planned his birth to coincide with the founding of the Ahmadiyya Muslim Jamaat.

When he was of school age, he was admitted to a public school. In 1898 he was admitted to Taleem al-Islam School. Because he enjoyed indifferent health he was not much interested in schoolwork. For instance in 1905 when he took the grade ten examination for admission to university he failed. This was the extent of his formal schooling. During his school years when his teachers would bring to the knowledge of Hazrat Ahmad(as) his poor grades, Hudhoor would shrug his shoulders and point out that this was mainly due to his poor health. He would admonish the teachers “Do not force him to do more than he can bear”. His failing the grades was in fact a blessing in disguise. Had he been smart in his studies at school and received all kinds of diplomas, some people might have argued he was smart because of his good schooling.

Almighty Allah had intended that he should receive heavenly schooling instead of his formal schooling by teachers. Allah the Exalted bestowed him with knowledge of the visible and invisible matters. When he reached the prime of his age, scholars stood in awe before him.