Hazrat Khalifa al-Masih the Second had established a selection committee as well as rules for the election of a Caliph during his lifetime. This was done in consultation with representative of various Jamaats comprising of the Majlis Mushawarat (Advisory Committee). Accordingly on the demise of the Second Caliph on 8th November 1965 at 7.30pm after Isha prayers at Masjid Mubarak, Rabwah, a meeting of Majlise Intikhab (the Electoral College) was held under the chairmanship of Hazrat Mirza Aziz Ahmad, Executive Director, Sadr Anjuman Ahmadiyya.

First, all the members of the Electoral College pledged their allegiance to the institution of Caliphate according to the pre-established rules. Then votes were cast & Hazrat Mirza Nasir Ahmad, eldest son of Hazrat Khalifa al-Masih the Second was elected as the new Caliph by a majority vote. All the members of the committee entered afresh into covenant of allegiance on his blessed hand. He made a brief address, and then all those who were outside of the Mubarak mosque (numbering well over 5000) took the oath of allegiance. Thus the Community was once again united at his hand. 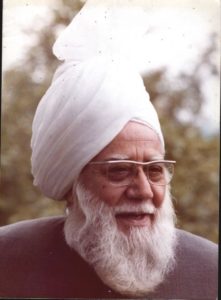 Hazrat Hafiz Mirza Nasir Ahmad, Khalifat al-Masih the Third was born on November 16th, 1909. From his early childhood, he was brought up by Hazrat Amma Jan, raziallah anha. When he was merely thirteen years of age, he committed the entire Holy Quran to memory. He learnt Arabic and Urdu from Hazrat Maulvi Sarwar Shah(ra). He was then admitted to Madrassa Ahmadiyya to further his religious education. After completing his course of study in theological and oriental studies (Maulvi Fazil) he graduated from Government College, Lahore. In 1934 he obtained a Bachelor of Arts degree from the University of Punjab.

He was married to Hazrat Sayyeda Mansoora Begum, daughter of Hazrat Nawab Muhammad Ali Khan(ra) and Hazrat Nawab Mubaraka Begum(ra) in August 1934. On September 6th, 1934 Hazrat Khalifat al-Masih the Second sent him to England. Before his departure, Hudhoor gave him a long list of do’s and don’ts while in the UK. One piece of advice was:

I am sending you to England so that you may fully grasp the Western point of view…. It is your responsibility to find ways for serving Islam, and how to counter the evil attacks. Get to know all the weapons Dajjal is using against Islam.

During his stay at the Oxford University he earned the Master of Arts degree. In his free time he busied himself spreading the word. Also he started the publication of a magazine al-Islam. In November 1938 he returned to India after completing his education with flying colors.

On his return home he was appointed lecturer at Jamia Ahmadiyya (Theological College), becoming its principal in 1939. From February 1939 to October 1949 he was president of the Majlis Khuddam al-Ahmadiyya, and vice-president until 1954 because Hazrat Khalifat al-Masih the Second was himself the president during this critical period. During his tenure the Majlis progressed by leaps and bounds.

From May 1944 to November 1965 he was principal of Taleem al-Islam College until his election as the Third Caliph. At the time of partition he stayed in Qadian but immigrated to Pakistan on November 16th, 1947.

During the anti-Ahmadiyya riots in Pakistan in 1953, he was detained under the Martial Law regulations. He suffered many hardships during his incarceration. He was set free on May 28th, 1953. While he was President of Ansar Allah in 1954, he infused a new life into the organization. In May 1955 he became Executive Director of Sadr Anjuman Ahmadiyya. He carried out the arduous responsibilities of Executive Director diligently, remaining in this position until his election as the Caliph ten year later.

On November 8th, 1965 he assumed the exalted position of the Third Caliph of the Promised Messiah. Thus was fulfilled the glad tiding, which Hazrat Musleh Mauood(ra) had received from God Almighty. He had announced on September 26th, 1909:

Allah has given me the glad tiding that I will be blessed with a son who will be a Nasir-e-Deen (helper of faith). He will be committed to serving Islam. (History of Ahmadiyyat, Urdu, Vol 4, page 320)

Dear Children, the dawn of the Third Caliphate also brought tremendous success to the Movement and was indeed a source of blessing by the choicest favors of God Almighty. Hazrat Khalifat al-Masih the Third was born not only in fulfillment of a glad tiding but his reign of Caliphate had been prophesized thousands of years before. It was prophesied in the Talmud:

“It is also said that He (The Messiah) shall die and his Kingdom descend to his son and the Grandson” (Talmud by Joseph Barclay, chapter V, page 37, 1878, London)

Thus this prophecy was literally fulfilled by the establishment of the third Caliphate.

The blessed period of the Third Caliphate lasted for seventeen years. Many of us have witnessed signs of God’s glory that were brought about by a variety of projects initiated by the Third Caliph.

Unity in the Jamaat

On the death of the Second Caliph(ra), the manner in which members of the Community were united on the blessed hand of Third Caliph is indeed a heavenly sign on the truthfulness of the Ahmadiyya Muslim Jamaat and the institution of Caliphate.