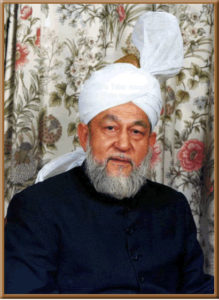 Hazrat Mirza Tahir Ahmad, Khalifat al-Masih ar-Rabey was born on December 18, 1928 at Qadian, India. He passed the high school examination in 1944. The same year his mother Hazrat Sayyeda Maryam Begum, who belonged to the noble family of Sadat, passed away. He studied for two years at the Government College Lahore and later obtained his Bachelor of Arts degree from the University of Punjab. In 1949 he received his Shahid degree from Jamia Ahmadiyya.

In 1955 he accompanied his father Hazrat Musleh Mauood(ra), to Europe. During his stay in London he was enrolled in University’s School of Asian and African studies. Upon his return home in 1957 he devoted himself to the service of the Jamaat and held many important positions like Sadr Khuddam al-Ahmadiyya, Nazim Irshad Waqfe Jadid, Director Fazle Umar Foundation, and Sadr Masjlis Ansar al-Allah.

In April 1984 General Zia al-Haq, former president of Pakistan, passed an Ordinance whereby no Ahmadi could declare himself/herself a Muslim. This meant that Ahmadis could not recite the Quran, or recite the Azan (call to prayer) before Salat times. They could not display the Kalima Tayyaba or offer the Islamic greeting ‘Assalamo alaikum’ to any one. The contravention of these regulations carried heavy fines, or imprisonment or both. Thousands of Ahmadis were thrown behind bars under these draconian laws, and some are still incarcerated in the Pakistani jails.

At this time Huzoor was still living in Rabwah, where the head offices of the Movement are located. General Zia al-Haq ordered that Huzoor should not be allowed to leave the country under any circumstances. So personnel was assigned to all the exit routes in Pakistan to keep a watchful eye for Huzoor. The plan hatched by Zia was to capture the Head of the Movement because he knew it would ultimately peter out the community. However Huzoor miraculously departed from Pakistan right before their eyes and reached London on April 30th, 1984. This in itself is a miracle wrought by God Almighty.

In London Huzoor set up the administrative offices of the Movement. He then launched several landmark initiatives that resulted in an unprecedented expansion of the Community.

Milestones of his Caliphate

By the grace and innumerable bounties of Allah the Community has witnessed 21 successful and blessed years of the Fourth Caliphate. The Community has with great enthusiasm responded to financial initiatives put forth by their much-loved Imam. The Community is on the road to progress in many fields including the launching of MTA, building of new mosques and mission houses, Islamic literature, translations of the Holy Quran, International Dars al-Quran, Homeopathic medicine, Al-Fazl International newspaper, constructions of hundreds of new mosques, schools and hospitals. In the following pages some salient events are discussed.