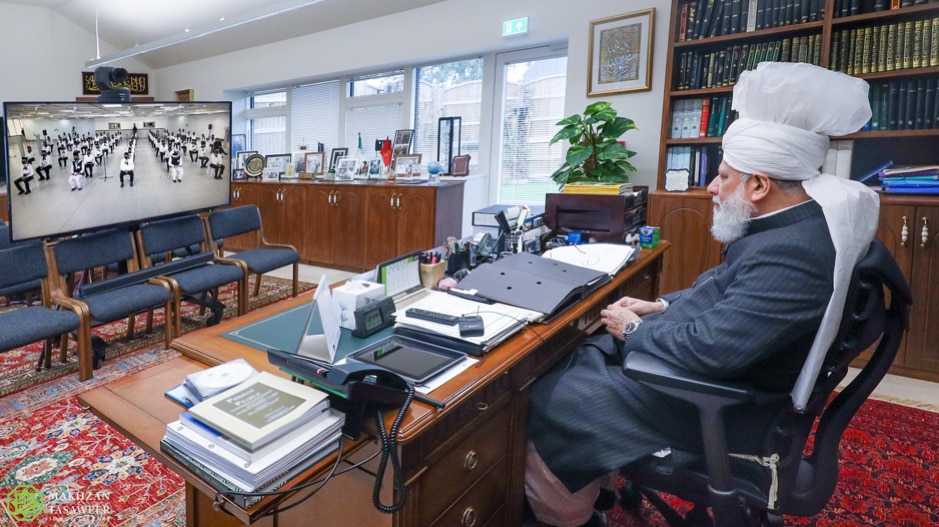 On 29 November 2020, the World Head of the Ahmadiyya Muslim Community, the Fifth Khalifa (Caliph), His Holiness, Hazrat Mirza Masroor Ahmad held a virtual online meeting with 60 members of Majlis Atfal-ul-Ahmadiyya from Germany aged between 12 and 15.

His Holiness presided the meeting from his office in Islamabad, Tilford, whilst the members of Majlis Atfal-ul-Ahmadiyya were gathered at the  Acorum-Park Mainz-Kastel Hall in the German city of Wiesbaden.

The event started with the recitation and translation of verses of the Holy Quran, followed by a poem.

For the rest of the one hour meeting, members of Majlis Atfal-ul-Ahmadiyya had the opportunity to ask His Holiness a series of questions regarding their faith and contemporary issues.

His Holiness was asked how Muslims should respond to those people who feared Islam.

“We, Ahmadi Muslims, have always and will always respond to those who fear Islam or Muslims and seek to address their concerns. For example, we hold Peace Symposiums here in the UK, where I speak about Islam’s true teachings and I have instructed such events to take place across the world. Similarly, some years ago, I launched an international campaign for the dissemination of leaflets explaining Islam’s true and peaceful teachings on a vast scale. At an individual level, it is the duty of every Ahmadi Muslim to explain to people that Islam is a religion of love and compassion. It is the duty of all of us to increase awareness of these true teachings so that whatever fears or reservations exist in the hearts and minds of others are removed. Even children like you should play your role by telling your friends and class fellows about the real teachings of Islam.”

“Unquestionably, Islam is a religion of peace and love and does not permit warfare or violence. It should be clear that when the early Muslims were permitted by Allah the Almighty to defend themselves through Jihad for the first time it was in order to protect the institution of religion and the principle of freedom of belief for all. Thus, in the Holy Quran (chapter 22, verses 40-41), it states that permission for a defensive war was given because the Muslims were being cruelly targeted and if the opponents were not stopped then all Churches, Synagogues, Temples, Mosques and other places of worship would be in grave danger. Therefore, permission for a defensive war was given in order to protect and secure all religions.” 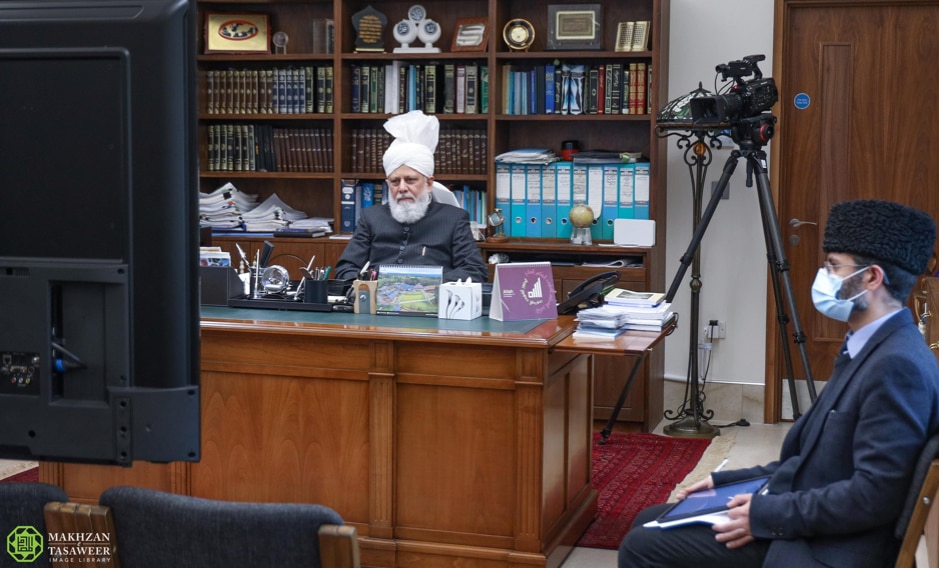 “Let it be clear that under no circumstances has Islam ever permitted the use of force, murder or any other form of violence for its spread. In fact, Islam says that if a Christian church, a Jewish synagogue or a Hindu temple is attacked, it is the religious duty of Muslims to defend them. Hence, Islam is that religion which protects other religions and so the hateful acts of so-called Jihadi extremists have nothing whatsoever to do with the true teachings of Islam.”

Later, His Holiness was asked if he thought the world will ever return to its previous pre-COVID-19 ‘normal’ state. 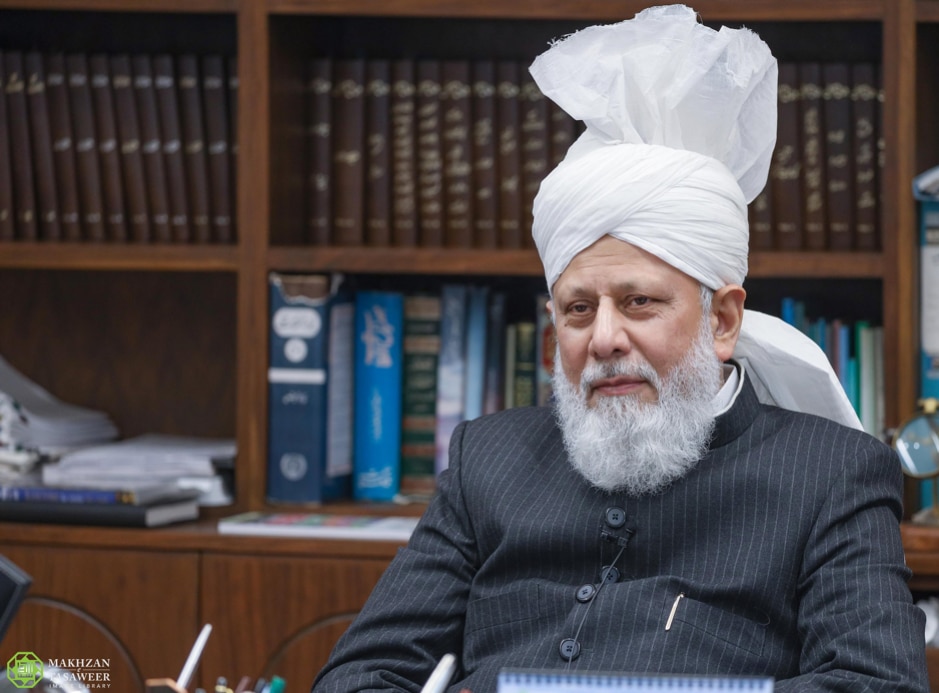 “Allah the Almighty knows better exactly what the future holds. However, it is clear that even after the coronavirus pandemic, the devastating economic consequences will remain for a long time to come. Even if there is no physical warfare or major conflict, it will still take years for the global economic situation to stabilise. However, history shows us that when there are deep-rooted economic problems it more often than not leads to warfare and so it does seem that we are moving closer to a major war.”

“If, God forbid, a war is ignited after the coronavirus then the situation of the world will darken yet further and the consequences will last for many years to come. So we must pray that may Allah the Almighty grant the people and nations of the world sense and wisdom so that instead of being engulfed by materialistic desires and instead of usurping the rights of one another, the world’s leaders and nations are able to see sense and strive for peace and harmony. It should be the goal of every nation and people that the world becomes more united and peaceful. If such efforts are not made, then the situation will not return to ‘normal’ for a long time and will become extremely dire.”

“I fear and feel that it is quite possible that a war or conflict could break out after this pandemic ends and its ruinous effects could last for many years. Thus, we must pray that warfare does not break out and that world leaders act with sense so that the global situation can stabilise as quickly as possible. To achieve this, it is necessary that mankind turns towards God Almighty otherwise we will see more pandemics or other devastating occurrences in the future. Certainly, we will not see true peace and prosperity until mankind bows down before its Creator and fulfils His rights and the rights of His Creation. This is the message that we Ahmadi Muslims must convey to others that the time is now for mankind to turn towards God Almighty.”