People should be able to recognise that Ahmadi Muslim women are those whose actions, morals, demeanour, speech and social interactions are all of the highest order according to the teachings of Islam.” – Hazrat Mirza Masroor Ahmad 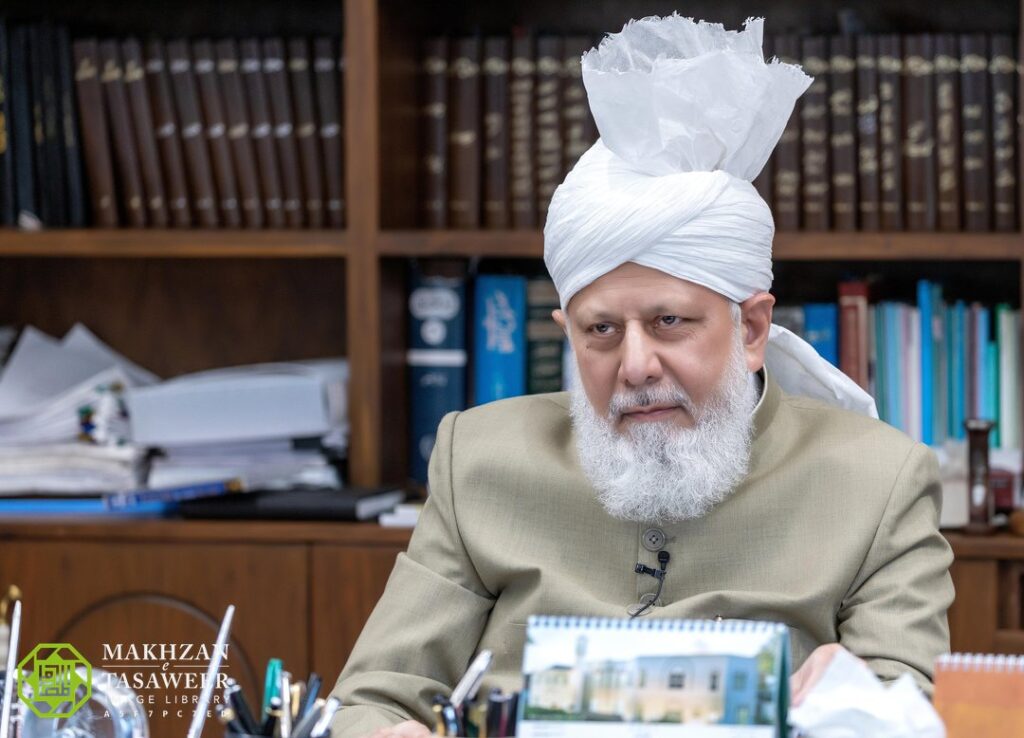 On 6 June 2021, the World Head of the Ahmadiyya Muslim Community, the Fifth Khalifa (Caliph), His Holiness Hazrat Mirza Masroor Ahmad presided a virtual meeting with members of Lajna Imaillah in Kababir in Haifa.

His Holiness presided the meeting from his office in Islamabad, Tilford, whilst the Lajna members joined from Mahmood Mosque in Kababir.

After short presentations, the Ahmadi Muslim women living in Kababir had an opportunity to ask His Holiness a range of questions.

One of the attendees asked His Holiness about the societal and political tensions associated with living in the Middle East.

With regard to their lives in the Middle East, His Holiness said it was up to Ahmadi Muslims to live with due caution and wisdom. Furthermore, it was their duty to faithfully manifest the noble and peaceful teachings of Islam in order to remove any misconceptions or fears from the minds of non-Muslims.

Thereafter, His Holiness noted that all societies across the world were facing challenges, most notably the relentless rise of materialism that was leading mankind away from religion and belief in the existence of God. 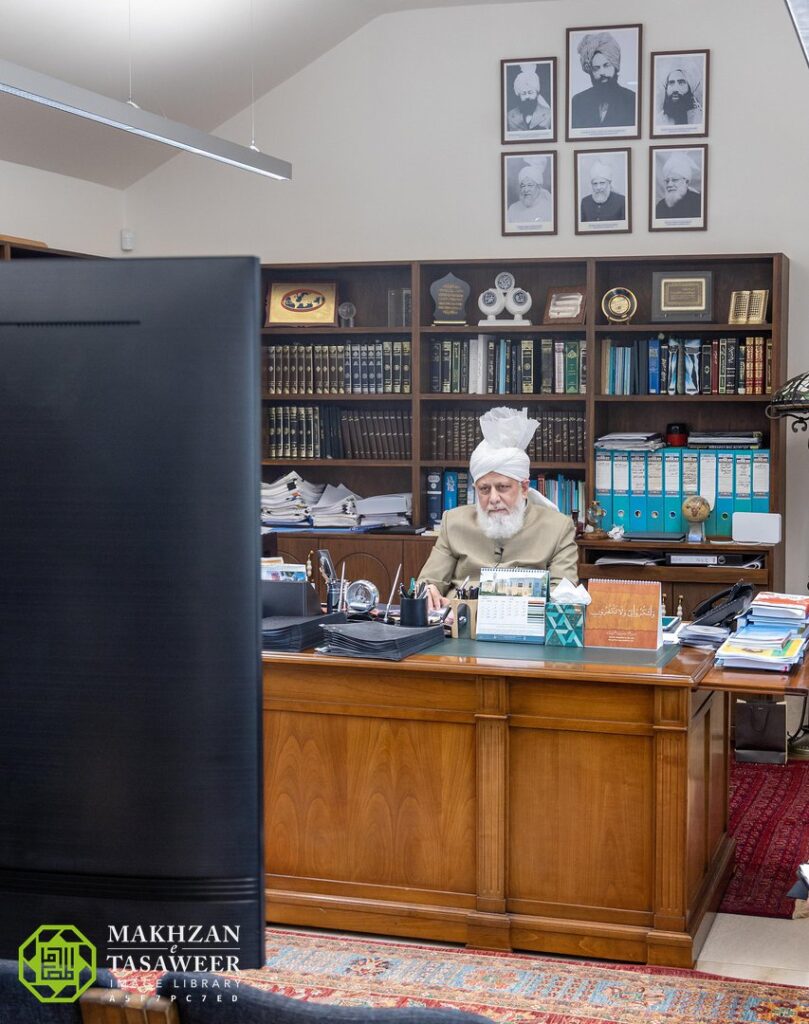 “The biggest danger to the wellbeing of the world is the widespread dissemination of immorality and wrongdoing by deceiving forces that is being spread through the media, the internet and other means. As a result, young people across the world are moving away from their faith despite having been born in religious households. Mankind is turning increasingly towards fulfilling worldly desires and materialism… So, we must try to avoid a similar fate for our children by making great efforts to raise them in the best way and mothers have a fundamental role in this.”

“From childhood, mothers should forge a close bond with their children and teach them about their faith. An Ahmadi Muslim mother has a duty to ingrain within her child that they must forever give precedence to their faith over the world and that they should never be overcome or be swayed by the bright lights and superficial ways of the world.”

“When a person truly strives to give precedence to their faith in all matters and endeavours to fulfil the demands of worship and to forge a loving relationship with God and to adopt the highest morals and to act upon Islam’s teachings, then they will surely attain the pleasure of God. Furthermore, when the pleasure of Allah the Almighty is attained then a person’s worldly needs also come to be naturally fulfilled.”

“Therefore, it is incumbent upon you to morally train your sons and daughters from a very young age – this is the way to protect your future generations and this is the great challenge of our time. Thus, do not consider the local issues and problems that arise in your region to be the ultimate challenge. Rather the true challenge lies in combatting the moral malaise and evils that are spreading in the world.”

His Holiness was also asked what his message was for Arab Ahmadi Muslim women.

“So this is the way that an Ahmadi Muslim woman must raise her children and this is a very heavy task. If Ahmadi Muslim women fulfil this responsibility, then they will come to embody the saying of the Holy Prophet (peace and blessings be upon him) that ‘Heaven lies under the feet of one’s mother.’”

One lady mentioned that Muslim women who observed Hijab were often viewed suspiciously and judged harshly by non-Muslims in their society.

His Holiness mentioned that such social pressures pertaining to Hijab existed in many countries and that laws had been enacted restricting the rights of Muslim women to wear a veil in certain European countries.

“In your society it may be that some people criticise you and laugh at you (for observing Hijab). However, there are other nations where laws have been established against Hijab and despite this, those who have a firm faith continue to observe Hijab. So, you will have to decide whether you wish to follow the commandments of God and bear every hardship and mockery and every critical remark for His sake or whether you will become fearful and accept what other people say and follow the trends of society? This is a decision you have to make.”

“So you have to decide whether you wish to safeguard your faith and establish a relationship with Allah the Almighty and follow what He says or will you become afraid of the society and worried over small criticisms and so abandon your religious teachings? I hope that a believing Ahmadi Muslim woman and girl will remain firm upon their faith and that having accepted the Promised Messiah (peace be upon him) she will act upon the teachings of the Holy Quran – the teachings for which the Promised Messiah (peace be upon him) was sent by Allah the Almighty.”

Another attendee asked His Holiness how an Ahmadi Muslim woman who was in employment due to financial need could ensure that she did not neglect her duties to her family.

“If an Ahmadi Muslim mother works out of necessity to help with the finances of the house, she should try to find a job which finishes at such a time that she can be home when her husband comes home and when her children return from their schools. If that is not possible and she is unable to receive her children when they return from school then the children should know that their mother has done some preparation for them so that after having washed and changed, there is food waiting for them to eat.”

“A mother who is working professionally will have to work twice as hard. She will have to fulfil her obligations at her workplace and she will also have to give adequate time to her children. She should talk to them, guide them morally and should remind them to offer their prayers. No matter what, a positive family environment within one’s home should be maintained…”

“Also keep an eye on your children that they do not watch harmful or indecent content on the internet. Similarly, when it is the weekend, a mother should spend as much time as possible with her children. Of course, it is also the responsibility of fathers that they should help the mothers within the home. A strong family environment should be created wherein the parents and children sit together and discuss their thoughts and views openly with one another. This will create unity and attach the children to their family forever and this will also develop and strengthen their attachment to the Ahmadiyya Muslim Community.”

Another question related to how young people could be attracted to the programmes of the Ahmadiyya Muslim Community at a time when people are moving away from belief in God.

His Holiness advised that Ahmadi Muslim mothers should play a role in ensuring that their children are involved from a young age in the activities of the Ahmadiyya Muslim Community.

His Holiness also said that the events of Lajna Imaillah and Nasiratul Ahmadiyya should be organised for girls and women in a way that attracts them and be interactive. His Holiness said fun activities and sports events should be organised for children and they should be given the opportunity to express their views and feel empowered, rather than simply asking them to listen to speeches.

His Holiness was asked if the verse of the Holy Quran which states that ‘Men are guardians over women’ means that the views and opinions of men are to be given precedence over those of women. In response, His Holiness categorically stated that this was not the meaning of the aforementioned verse.

“In terms of any domestic or matrimonial issues, I often say to Ahmadi Muslim men that the verse ‘Men are guardians over women’ also requires that men should show patience and should not quarrel with their wives unnecessarily. Every man should be patient and listen to his wife in the day to day matters so that the environment of the home remains peaceful. This is the meaning of the word ‘guardian’ that a man should keep the environment of the house peaceful for the sake of the children’s moral upbringing. A man is not made the guardian to dominate his family, rather he is made guardian in order to fulfil the rights of his wife and children.”

“MTA is eliminating distances, removing barriers and, above all, ensuring that the Community of the Promised Messiah (peace be upon him) remains united at the hand of Khilafat and that Ahmadi Muslims across the world follow exactly the same religious teachings and beliefs.” – Hazrat Mirza Masroor Ahmad more