On 26 November 2011, the Ahmadiyya Muslim Jamaat celebrated the Golden Anniversary of the Independence of Cameroon, Sierra Leone and Tanzania in an event organised by the Pan-African Ahmadiyya Muslim Association UK. Dignitaries representing a number of African countries attended the function that took place at the Baitul Futuh Mosque in Morden, Surrey.

The highlight of the event was the attendance and address given by the Head of the Ahmadiyya Muslim Jamaat, Hazrat Mirza Masroor Ahmad. His Holiness spoke of the need for unity amongst the people and leaders of Africa. He said that if all parties preferred the national interest to their personal interests, then Africa could become a true global power.

The event began with a welcome address by Issah Ahmed Wehma, the Chairman of the Pan-African Association, who said that it was always a pleasure for the Ahmadiyya Muslim Jamaat to host such events that promoted peace and unity. 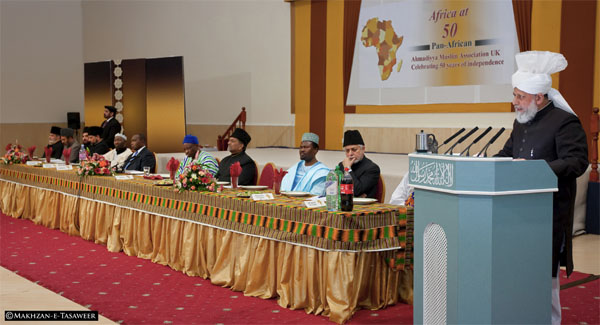 Thereafter, various African Dignitaries took to the stage. His Excellency, Wesley Momo Johnson, Ambassador of Liberia, said that it was his fourth visit to the Baitul Futuh Mosque and that each time he came, he felt emotionally moved by the mosque and great warmth within it.

Mr Alhaji Bawah Gilbert Ayembillah, Consular Minister for Welfare at the High Commission of Ghana spoke of the contributions made by the Ahmadiyya Muslim Jamaat to his country. He said:

“I would like to thank the Ahmadiyya Community for its contribution to the development of Ghana. The work done for our people by your Community is incalculable. Thus I thank you on behalf of the Government and people of Ghana.”

His Excellency, Mr Edward Mohamed Turay, High Commissioner of Sierra Leone, said that the Ahmadiyya Muslim Jamaat had shown true commitment to bettering the lives of the people of Sierra Leone through its humanitarian projects.

During his keynote address, Hazrat Mirza Masroor Ahmad spoke of the inequalities that continued to exist between the people of various nations and their leaders. He said that in countries where monarchies or dictatorships existed, the rulers withheld most of powers, leading to restlessness and dissent within the society. On the other hand, even though democratic countries claimed to provide justice and equality, in many instances they were failing to do so. Unfair polices were being implemented and this too was leading to civil unrest.

His Holiness said that Islam had provided the solution to such problems. It taught selflessness rather than selfishness, where each party should be willing to compromise his own rights for the sake of the greater good. 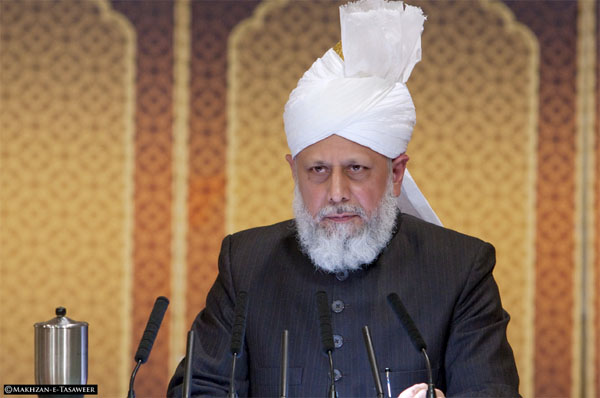 Speaking about the Ahmadiyya Muslim Jamaat’s humanitarian efforts, His Holiness said that the community had opened hundreds of schools and hospitals in various parts of Africa. Also, Ahmadi engineers were engaged in efforts to provide water, electricity and other services in remote parts of Africa as a means to help the deprived locals. Such services were rendered without any desire for recognition or reward.

“It is my heartfelt prayer that the African people are able to take full advantage and benefit from their independence. All countries should keep in mind that the leader of a country is the servant of that nation. Whichever laws or regulations are in force should apply just as much to the rich as to the poor. If this approach is maintained, then, God Willing, the freedoms that you have gained after long periods of colonial slavery, will come to be everlasting.

I firmly believe that if the African countries and people unite together and fulfil the requirements of justice, then one day, Africa will emerge as a true global power.”

“No one has the right to force another person to accept Islam. Whoever’s heart is to be inclined towards Islam will then be turned towards Islam by Allah the Almighty Himself.” – Hazrat Mirza Masroor Ahmad more