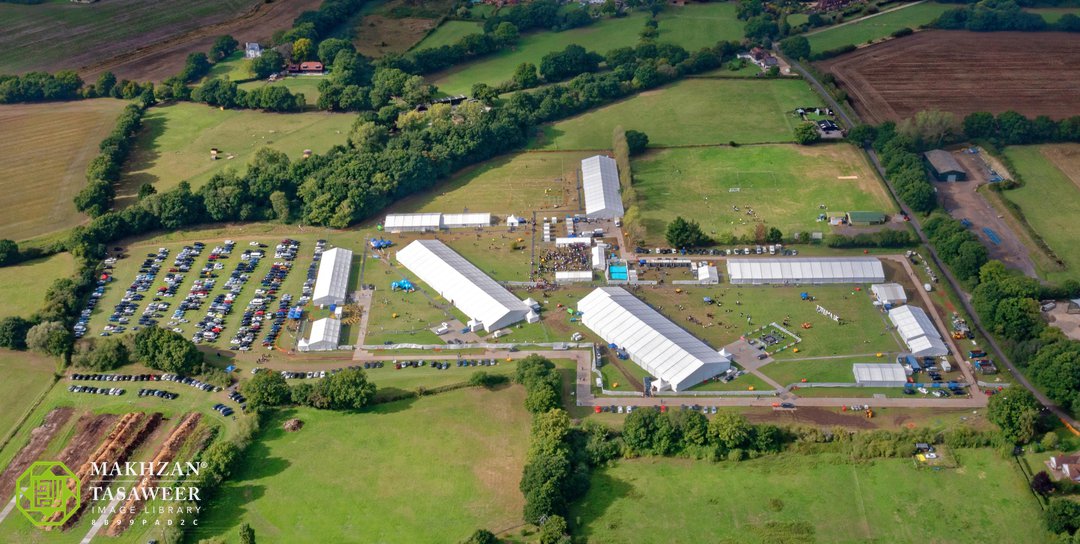 The 3-day event which was held at Old Park Farm in Kingsley was attended by more than 5700 young men and boys.

Due to the sad demise of Queen Elizabeth II, according to the instructions of His Holiness, some activities including sports at the Ijtema were scaled back out of respect.

Hazrat Mirza Masroor Ahmad also paid tribute to the life and service of the late Queen during his concluding address and said:

“The Queen was our long-serving Head of State and she led this nation with great dignity and justice for over seventy years. During her reign, the United Kingdom remained a beacon of religious freedom in the world.  Indeed, the Queen herself advocated for true religious freedom and inter-faith harmony on many occasions. Thus, we are grateful to have lived under such a gracious monarch.”

“As Ahmadi Muslims, we should be particularly appreciative of the fact that we were given the opportunity to establish our Community’s international headquarters (Markaz), after the migration of the Fourth Caliph of the Ahmadiyya Muslim Community, in the UK during the reign of Queen Elizabeth and have been able to practice and propagate our religion freely. In this regard, we will always be grateful to Queen Elizabeth, the British Government and this nation. Furthermore, we pray that our new Head of State, King Charles III, continues to ensure that religious freedom and justice for all people remains a hallmark of this nation and that the rights of the people are always fulfilled.”

His Holiness then went on to speak about some of the most fundamental moral qualities that the members of Majlis Khuddamul Ahmadiyya should adopt. 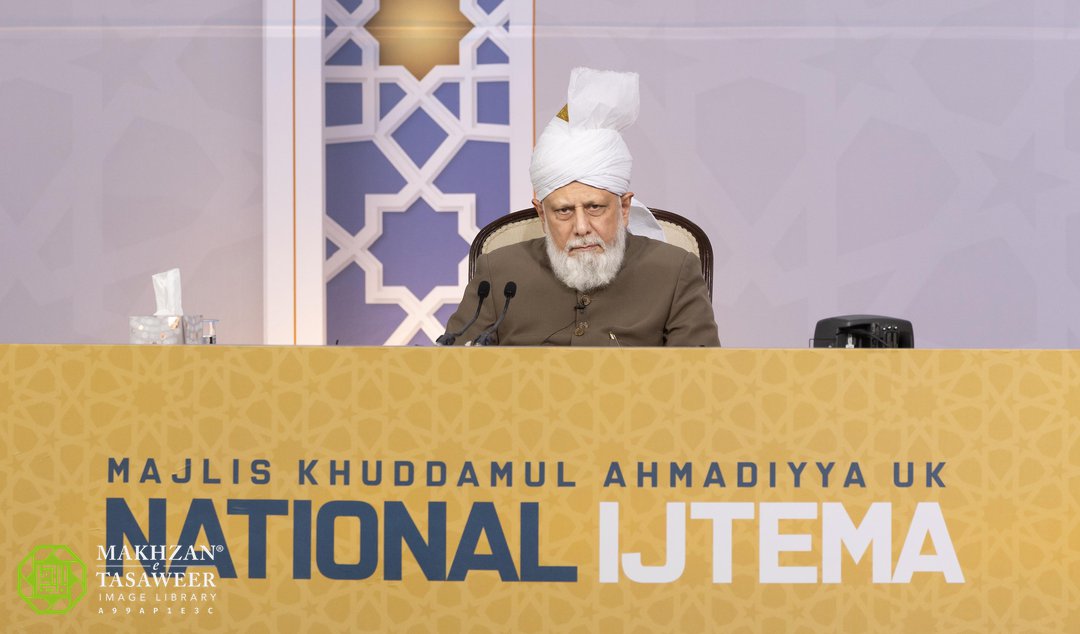 Throughout his address, His Holiness particularly emphasised the importance of saving oneself from any form of lying and always adhering to telling the truth.

His Holiness also spoke about the vital significance of worship of God Almighty in the form of the five daily prayers, known as ‘Namaz’ or ‘Salat’.

“Anyone who calls themselves a Muslim must pay great attention to ensuring that they protect and guard their worship – which requires them to be regular and punctual in offering Namaz with the utmost sincerity. The reason Allah the Almighty has made Namaz obligatory is because a person cannot remain spiritually alive without it. In other words, Salat is indispensable, and a person’s faith and spirituality cannot survive without it.” 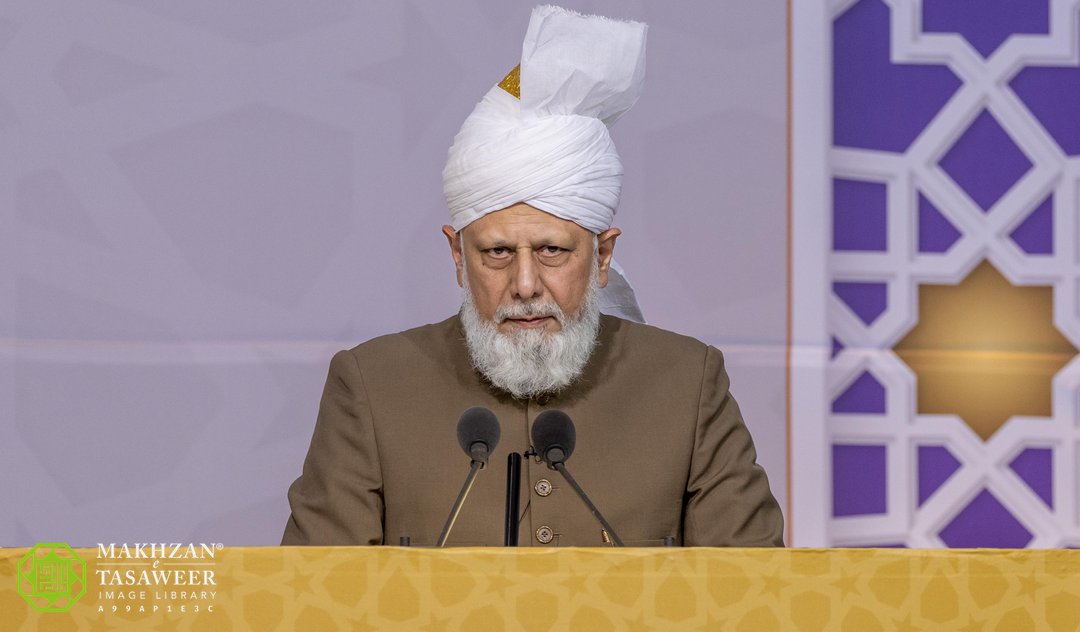 “Thus, just as a person is in perpetual need of air, food and water, in the same way, if a person wishes to remain spiritually alive, they must ensure that they constantly nourish their soul through Salat. Hence, throughout your lives, Namaz should be the one constant companion that you never let go of.”

On the topic of the benefits of Salat, His Holiness quoted chapter 29, verse 46 of the Holy Quran which states:

“Observe Prayer. Surely, Prayer restrains one from indecency and manifest evil, and remembrance of Allah indeed is the greatest virtue.” 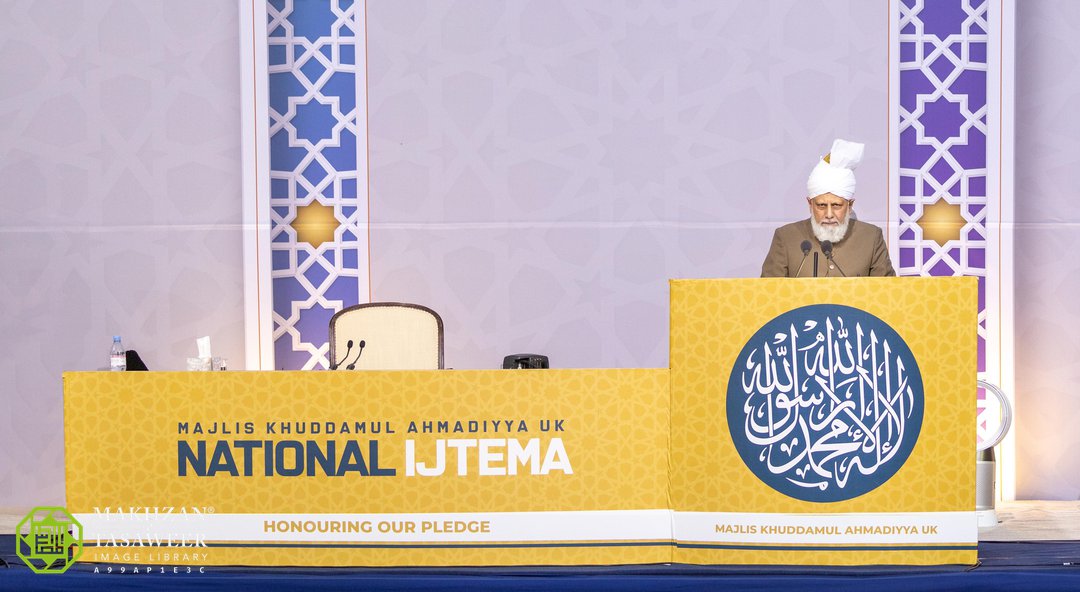 “In this verse, Allah the Almighty commands Muslims to ‘observe prayer’ and declares that Namaz is the means of protecting a person from immorality, indecency and all things He dislikes. Hence, to live a moral life and to be free from vice, one must offer the five daily prayers at their appointed times with full diligence and sincerity of heart. The very meaning of ‘observe prayer’ is that one must be regular in Namaz and offer it with complete focus and in a state of unconditional submission to Allah.”

His Holiness said that amongst the vices that exist in society, falsehood is a “sin of immense gravity and harmful to both the individual and the wider society.” 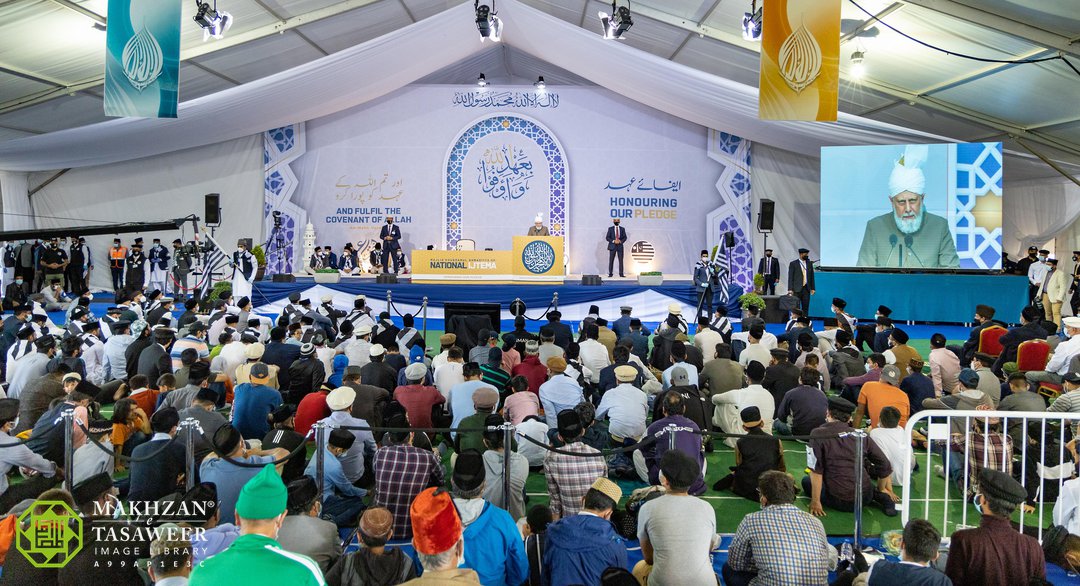 His Holiness narrated a Hadith of the Holy Prophet Muhammad (peace and blessings be upon him) which outlines four signs of a hypocrite.

The Holy prophet Muhammad (peace and blessings be upon him) said:

“There are four signs that make someone a pure hypocrite and whoever has them has a characteristic of hypocrisy until he abandons it: when he speaks he lies, when he makes a covenant he is treacherous, when he makes a promise he breaks it, and when he argues he uses foul language.”

His Holiness explained all the four aspects of the Hadith and advised against falling prey to any of them.

“Regrettably, it is incredibly commonplace for individuals, organisations and nations to make firm promises, declarations or treaties, upon which they later renege. According to Islam, the scale of one’s promise or pledge is irrelevant.  Even if a promise or deal is very small or low-level, a person is duty-bound to fulfil the terms he has agreed to. Otherwise, according to the Hadith, he is guilty of hypocrisy.”

“You must never violate the terms of the deals or pledges you make and nor should you resort to foul language or fail to observe proper manners and etiquette in your dealings with others. These are the essential components and characteristics fundamental to creating a harmonious and tolerant society of righteous people. If you live your lives in this way, you will be those who create a true and lasting bond with Allah the Almighty through your worship, and, at the same time, you will be amongst those who spread truth in society and serve as a source of enlightenment for humanity.

His Holiness also emphasised the importance of keeping good company.

“If you keep poor company, you will pick up bad habits such as lying, needlessly quarrelling or even fighting, instead of acting truthfully and being kind and considerate. Thus, the younger Khuddam and Atfal must be very conscious of their company. Make friendships with people who are sincere, who are honest and who are not involved in any immoral or senseless activities.”

His Holiness referred to the sayings of the Promised Messiah (peace be upon him) on the importance of avoiding the sin of lying.

His Holiness explained that lying is a sin that is akin to idol worship because when someone tells a lie, they feel that their lie can protect them whereas it is Allah the Almighty Who is the source of all protection.

His Holiness quoted the Promised Messiah (peace be upon him) who said:

“It is a pity that these wretched people do not give God the value He deserves. They do not know that without the Grace and Mercy of God Almighty, a person cannot survive. Yet they consider the filth of falsehood to be their god and the means of resolving their difficulties.”

Encouraging the youth to lead the world by their example, Hazrat Mirza Masroor Ahmad said:

“Today, it is the duty of Ahmadi Muslim youth to lead a campaign and movement against all forms of falsehood and deception and they must personally lead by example. Every Khadim and Tifl should pledge that they will never tell a lie because falsehood is equivalent to Shirk – associating partners with Allah the Almighty.”

“Let it be clear that those who rely on falsehood should not expect the Help of Allah, as He will not accept their supplications. As I said, the time is now for every Khadim and every Tifl to pledge that they shall never utter any falsehood. The time is now for you to lead a movement to uphold the truth and become those who worship Allah in the best way and whose moral standards are of the highest order… Ensure that you never lie or deviate even an inch from the truth. Only if we can reach those virtuous standards that free us from the shackles of hypocrisy, can we come to fulfil the demands of our pledge to give priority to our faith over all worldly matters.”

During his address, His Holiness quoted chapter 17 verse 35 of the Holy Quran which states:

“In this verse, Allah the Almighty categorically states that each person will be held accountable for their pledges and covenants. So, do not be under the misconception that standing here and repeating the words of the Khuddam pledge is sufficient – rather, you should understand the significance of this undertaking you have made openly before the world and in the presence of the Khalifa of the Time.  You must strive every minute of every day to fulfil it knowing that one day Allah the Almighty will hold you accountable over the fact that you openly proclaimed that you would give precedence to your faith over all other things. And He will hold you accountable over your pledge of complete loyalty and fidelity with the Khalifa of the Time and with the Community of the Promised Messiah (peace be upon him).”

Concluding his address, Hazrat Mirza Masroor Ahmad prayed for the Khuddam and Atfal and said:

“May you be filled with a sincere passion and ardent desire to fly the flag of the teachings of the Holy Prophet of Islam (peace and blessings be upon him) and the Promised Messiah (peace be upon him) in every part of the world. May you be those whose tongues remain pure and may your conduct be of the highest order so that you become noble examples of truth, sincerity and virtue for the rest of mankind to learn from. Surely, if and when you reach such standards you will be those who bring about a moral revolution in society. You will be the ones who hold aloft an eternal lantern of truth lighting up the world and lifting it out of darkness.” 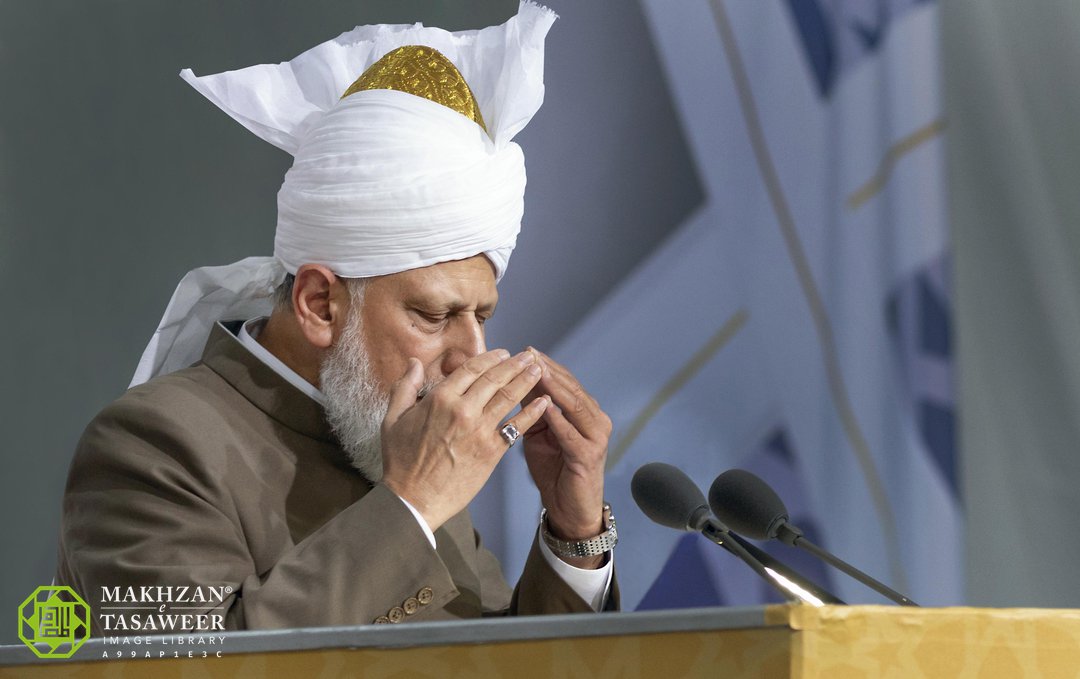 After his address, His Holiness also announced the launch of the English translation of the first half of the book Mashal-e-Rah Volume 1 which comprises of the historic addresses of Hazrat Khalifatul Masih II delivered to Majlis Khuddamul Ahmadiyya. 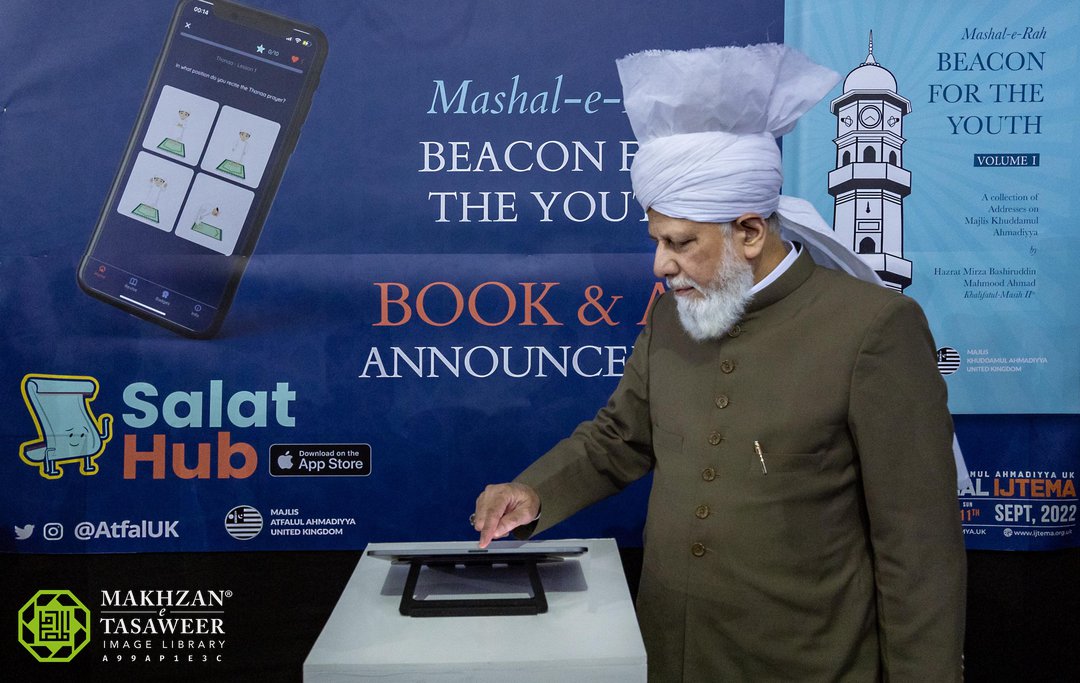 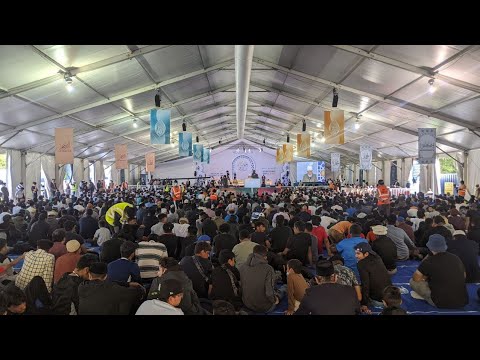