Hazrat Mirza Masroor Ahmad calls for justice at all levels

The World Head of the Ahmadiyya Muslim Jamaat and Fifth Khalifa, Hazrat Mirza Masroor Ahmad delivered the keynote address at a Welcome Reception held in his honour at the Oriental Mandarin Hotel in Singapore on the evening of 26 September 2013. The event was attended by more than 100 non-Ahmadi dignitaries and guests, including Mr Lee Koon Choy a founding member of the ruling People’s Action Party, who during a distinguished career also served as Singapore’s Ambassador to various countries.

During his keynote address, Hazrat Mirza Masroor Ahmad explained the basis for a just economy; the need for equity between nations; the misrepresentation of Islam; and his concerns at the increasing risk of a Third World War. 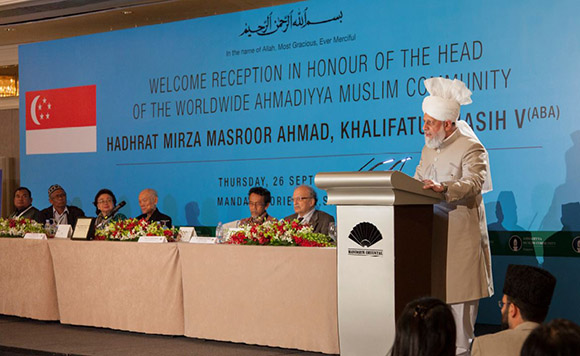 His Holiness began his address by referring to the modern day negative portrayal of Islam. He said that the religion had been defamed across the world due to the hateful acts conducted by certain so-called Muslims who were motivated only by personal gain.

“In much of the world today there is a belief or perception that Islam is a religion of extremism and force. Let me say at the outset that this is entirely wrong and the reality is the complete opposite… The truth is that there are some selfish Muslims who seek only to serve their own personal interests. To feed their own ambitions and desires they are interpreting Islam’s teachings in completely the wrong way and therefore have enabled various unfounded allegations to be levelled against Islam. Their acts unfairly tarnish Islam’s pure name even though the reality is that at every instance Islam provides only rational and logical answers that are entirely fair and just.”

Speaking about the means for a successful economy, His Holiness said Islam advocated fairness at all levels.

“Islam teaches that the world’s natural resources are the combined property and wealth of all of mankind… The vast treasures that Allah the Almighty has endowed, both above and below the earth, are not just for a few selected individuals but are for the benefit of every single person, in every part of the world.”

“Islam teaches that each and every child, no matter his or her background, should be provided a proper education so that they can develop into skilled and truly beneficial members of society.” 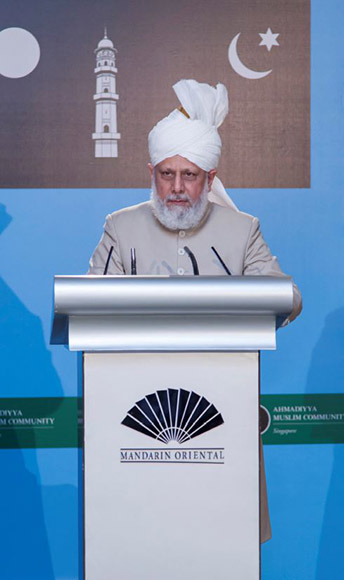 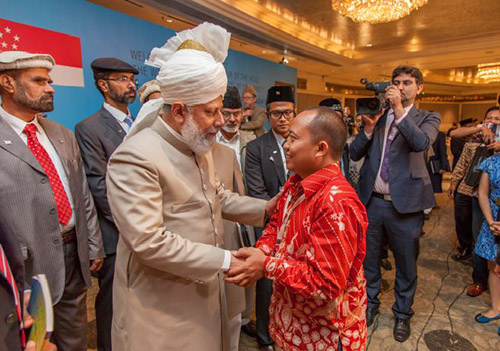 “Regrettably, we find that more than sixty years after the formation of the United Nations, the poor countries remain destitute and deprived, whilst the developed countries have remained rich and powerful. Islam has explained that a fundamental cause of this permanent inequality is that the world has not understood that the wealth of resources granted to mankind by God is for the combined use of all of humanity.” 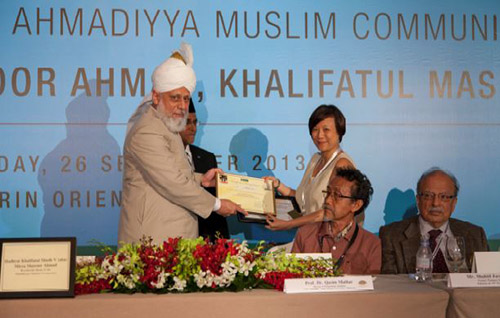 “Islam, however, counsels that the best state of affairs, which are of peace and harmony, can only be established when both sides work together for the greater good. The poor must fulfil their own responsibilities and work hard in order to benefit from their resources and wealth. On the other hand, the rich should happily display a true spirit of sacrifice in order to help their brothers and sisters.” 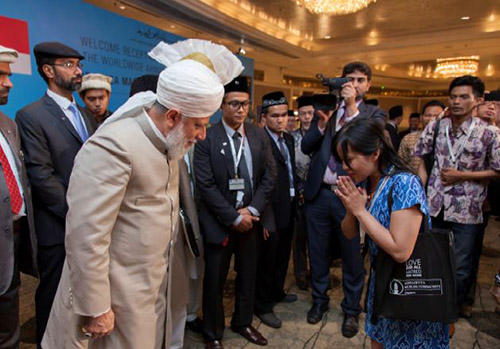 The Khalifa concluded by speaking about his fear that a global war could be ignited at any time.

“If we look back at history, we realise that a major factor that led to the first two World Wars was the prevailing economic situation and this part of the world where you reside was also caught in its effect. If such circumstances were to prevail again it would be extremely difficult to predict who would be safe and who would be in danger. We can only pray and present the facts and realities in front of everyone in an effort and hope that the world can be saved from all forms of destruction and danger. This is essential so that we are not looked upon with anger and as transgressors by our future generations.” 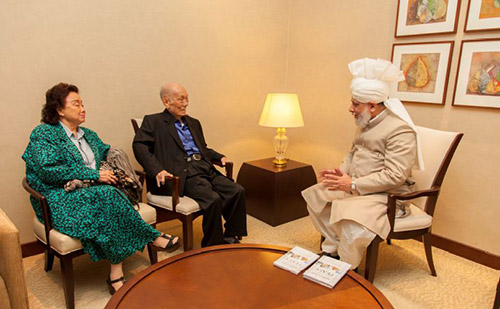 Earlier in the evening Mr Lee Koon Choy also addressed the audience stating that he had seen how Islam’s name had been tarnished over the previous decades and so he appreciated that the Ahmadiyya Muslim Jamaat was highlighting the true and peaceful nature of Islam to the world.

Prior to the event, Hazrat Mirza Masroor Ahmad held private meetings with various dignitaries and was interviewed by representatives of Indonesia’s national media. His Holiness also presented four local charities with donations on behalf of the Ahmadiyya Muslim Jamaat in Singapore.