The programme, hosted by Muhammad Sharif Odeh, celebrated the 106th anniversary of the Institution of Khilafat (Caliphate). As His Holiness arrived in the studio, tears flowed from the eyes of the host who was overcome by the blessed presence of the Khalifa. 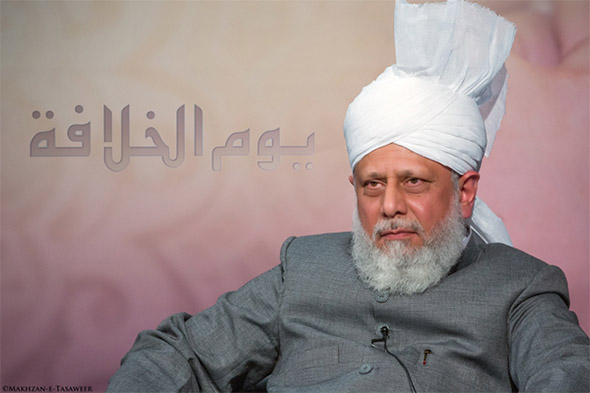 In his message, Hazrat Mirza Masroor Ahmad said that history proved that the Khilafat leading the Ahmadiyya Muslim Community was supported by God Almighty.

He said the Ahmadiyya Khilafat was engaged in continuing the mission of the Promised Messiah, Hazrat Mirza Ghulam Ahmad of Qadian, which was to spread the true and peaceful teachings of Islam to all parts of the world.

During his discourse, His Holiness spoke about the status of the Promised Messiah as a Prophet who came in subservience to the Founder of Islam, the Holy Prophet Muhammad (peace and blessings be upon him).

“The Holy Prophet Muhammad (peace and blessings be upon him) was sent for the entire world, for every era and for every place to remove the ills and wrongdoings of the world and all types of disorder.

His Holiness said that since his demise in 1908 the objectives of the Promised Messiah were being taken forward by the Institution of Khilafat.

His Holiness said the truth of the Khilafat of the Promised Messiah had been vouchsafed by the Holy Quran and by the Holy Prophet Muhammad (peace and blessings be upon him).

Speaking of the progress and service of the Ahmadiyya Muslim Community, Hazrat Mirza Masroor Ahmad said it had translated the Holy Quran into more than 70 languages and that each year hundreds of thousands of people were joining the community.

Given its very limited resources, His Holiness said that it was only with the Help of God that the Ahmadiyya Muslim Community had been able to flourish and spread so successfully throughout the world. 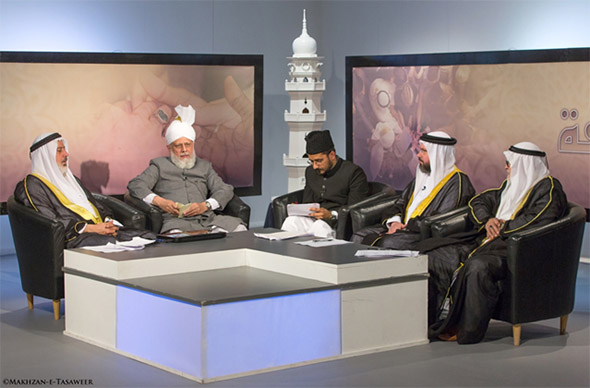 His Holiness said that wherever and whenever he had the opportunity to address world leaders or other non-Ahmadis about the teachings of Islam he always counselled his audiences towards justice, equality and honesty at all levels.

The Khalifa said that with the advent of MTA International, Ahmadi Muslims across the world were able to listen directly to the message of the Khalifa and through this the spiritual bond uniting Ahmadi Muslims had become ever more deeply entrenched.

His Holiness concluded by praying that all Ahmadi Muslims understood their responsibilities of spreading the true and peaceful teachings of Islam. His Holiness also offered a message of congratulations to Ahmadi Muslim on the occasion of the anniversary of the Institution of Khilafat.

Following his special message, Arab-speaking Ahmadi Muslims in different countries called into the programme and conveyed their greetings of peace to the Khalifa who in turn reciprocated.

The callers were all overcome with emotion as they had the opportunity to converse with the Khalifa – who Ahmadi Muslims believe to be divinely appointed.

The special programme came just over 2 months after His Holiness delivered his first ever Arabic address which was televised on the occasion of the 125th Anniversary of the establishment of the Ahmadiyya Muslim Community.