Hazrat Mirza Masroor Ahmad condemns the “hateful act” during a meeting with the National Majlis Amila (Executive) of the Ahmadiyya Muslim Community in Sweden, whilst calling for a peaceful response 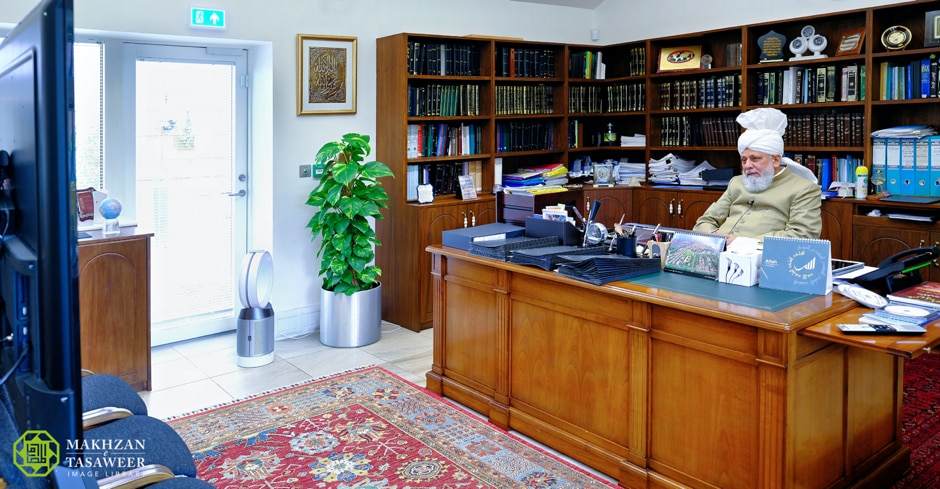 During the hour-long meeting, the Amila members had the opportunity to present a report about their respective departments and to seek the guidance and instructions of His Holiness on a range of issues. 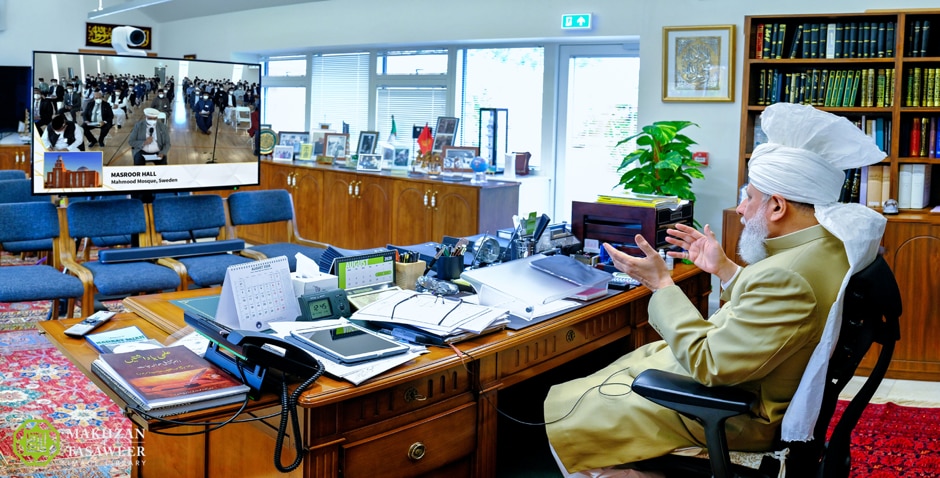 Whilst speaking to the National Secretary Tabligh (Outreach), His Holiness condemned in the strongest terms far-right extremists who had burned a copy of the Holy Quran in Malmo a day earlier.

His Holiness also made it clear that it was wrong for Muslims to respond to such horrific and provocative acts through violence or disorder. Rather, it was up to Muslims to educate people about the Quran’s true teachings so that anti-Muslim extremists could not seek to defame Islam by taking individual Quranic verses completely out of context to further their own hateful aims and objectives.

“The truth is that most people in Sweden and other Western countries remain unaware of the true teachings of Islam and this enables extremists to take individual verses of the Holy Quran completely out of context for the sake of their false propaganda. People who conduct such hateful acts have no knowledge of Islam or what the actual conditions laid down in the Holy Quran are for Jihad. They ignore the fact that the Bible has many more verses that can be taken out of context and used to justify the use of force. Regardless, it is the duty of Ahmadi Muslims to introduce and exemplify the true and peaceful teachings of Islam in each and every city and town so that people understand the reality of our religion.”

Addressing the National Amila members, His Holiness urged each of them to do justice to their duties and to constantly keep in mind the Quranic injunction that to fulfil one’s pledges and covenants is of the utmost importance.

His Holiness said that Majlis-e-Amila members, whether serving at a national, regional or local level within the Ahmadiyya Muslim Community administration, must set a positive example for other Ahmadi Muslims in all respects and practice what they preached.

For example, in order to encourage others towards service, members of Majlis-e-Amila should themselves be at the front of the queue to volunteer for limited periods of dedicated service to the Ahmadiyya Muslim Community (Waqf-e-Arzi) during which they could seek to spread the message of Islam through Tabligh or to teach the Holy Quran to other members. 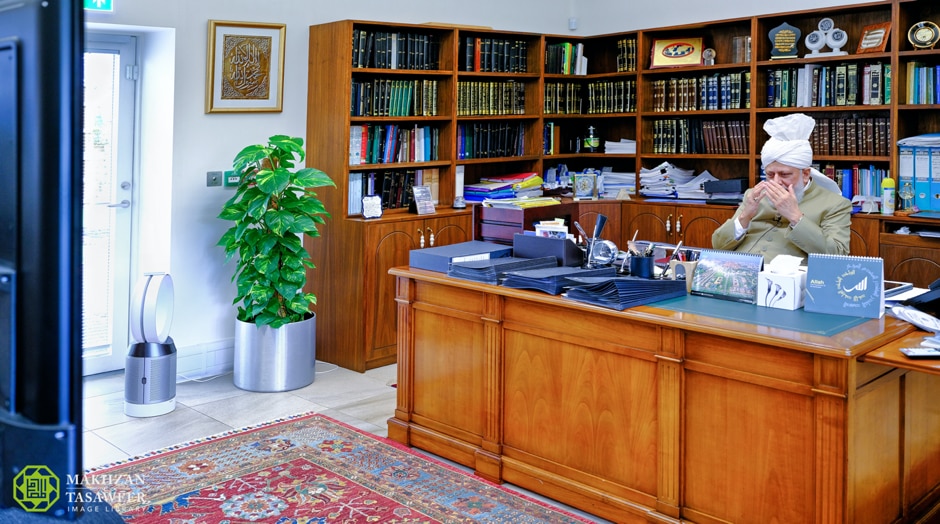 His Holiness also said it was imperative that efforts to spread the teachings of Islam continued through online events until it was safe to resume public events.

“During the COVID-19 pandemic, the Ahmadiyya Muslim Community has greatly increased its efforts to spread Islam through online Tabligh. Certainly, more online events should be organised in which questions others may have about Islam or our teachings are answered.”

“Furthermore, we should warn other people that we firmly believe that this pandemic should draw the attention of mankind back towards God Almighty. All signs point to the fact that even once the pandemic comes to an end there will be a worldwide economic crisis which will result in increased competition and rivalries between nations. Such tensions could easily pave the way for further injustices and, God forbid, ultimately ignite and lead to warfare and conflict.”

As the meeting concluded, His Holiness reminded the members of Majlis Amila to fulfil their duties with integrity and with the fear of Allah the Almighty embedded in their hearts.

“From the local level to the national level, all office bearers of the Ahmadiyya Muslim Community must strive to fulfil their duties and to act upon the guidance of Khalifatul Masih. If you work with sincerity, diligence and humility it will surely lead to success and progression. However, if you only desire to be an office bearer for the sake of attaining prestige and are unwilling to work with humility or to cooperate with others you will be only be a cause of harm. You can deceive other people but you can never deceive Allah the Almighty and so always remember that He is watching our every act. Thus, seek to utilise all your faculties and capabilities for His sake and I pray that may Allah the Almighty be your Protector and Guide. Ameen.”

“The nations that progress are those who keep their shortcomings in view and try to improve upon them.” – Hazrat Mirza Masroor Ahmad more

“Develop the realisation that we are the ones who are to (morally) reform the world and, it is our job to guide others rather than following the world ourselves.” – Hazrat Mirza Masroor Ahmad more

“Just as the sun rises without fail each morning, our each and every day should give rise to glad tidings of the spiritual progress and advancement of the members of the Community.” – Hazrat Mirza Masroor Ahmad more