“Islam proclaims that all people are born equal” 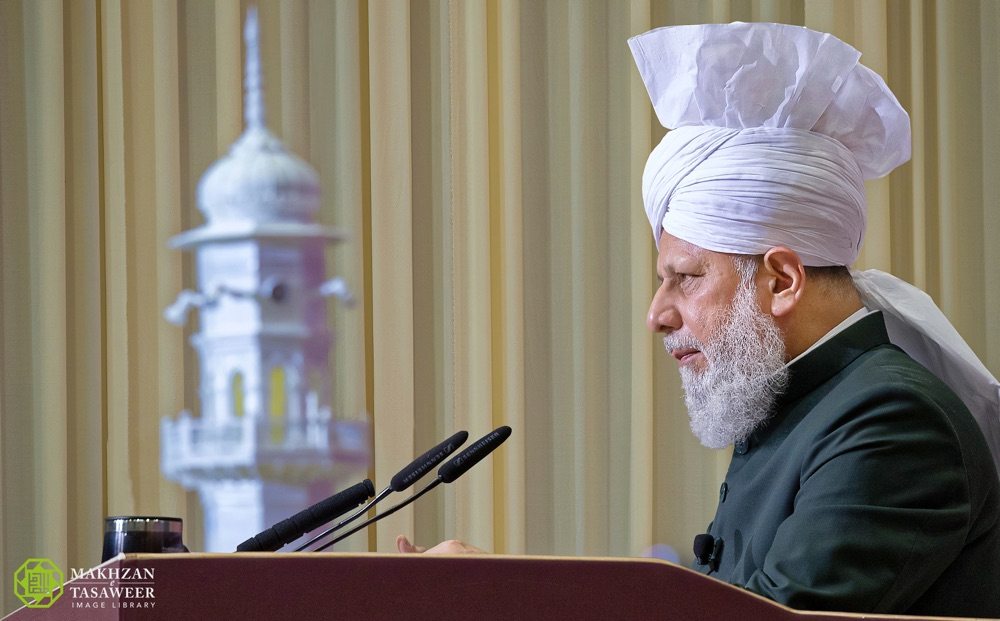 At a time when racial tensions and prejudices are escalating in certain countries, His Holiness said that there was an urgent need to recognise that all people were born equal and no race or nation was superior to any other.

His Holiness also used his address to categorically condemn all forms of extremism and those so-called Muslim clerics who were radicalising Muslims in different countries. Further, His Holiness called into question Western policies of selling weapons to Muslim countries, which he said were fuelling wars and conflicts.

Condemning in the strongest possible terms the role of extremist clerics and Muslim governments in destabilising the world, Hazrat Mirza Masroor Ahmad said:

“Extremist Muslim groups or clerics have preyed upon vulnerable Muslims and rather than guiding and helping these frustrated and misguided people, they have poisoned their minds with extremism and radicalised them… In a similar vein, we have long seen that some Muslim governments are mistreating their people and have inflicted untold cruelties and injustices upon them which has bred division and led to uprisings and bloody civil wars.”

“Without a shadow of doubt, Islam’s teachings are a guarantor for peace and security for all mankind. Its teachings are rooted in compassion, mercy and humanity and it is these true Islamic values that the Ahmadiyya Muslim Community has endlessly emphasised and endeavoured to spread across the world for more than 125 years.”

Hence, a true Muslim could never discriminate or oppose non-Muslims, as has been increasingly alleged in modern times. On the contrary, His Holiness said that amongst those who condemned Islam were people who themselves were guilty of racism and prejudice.

“Such extremist views can only fuel resentment and despair amongst the people of other races and ethnicities. In complete contrast, Islam proclaims that all people are born equal, no matter where they hail from or the colour of their skin.”

“momentous speech that laid the foundations for world peace”.

“In words that were as timeless as they were enlightened, The Holy Prophet (peace be upon him) proclaimed that all people were born equal and that a white person was not superior to a black and nor was a black person superior to a white… Brandishing an eternal torch illuminating the path towards universal human rights, the Holy Prophet (peace be upon him) pronounced that all human beings were born equal and had the same rights.” 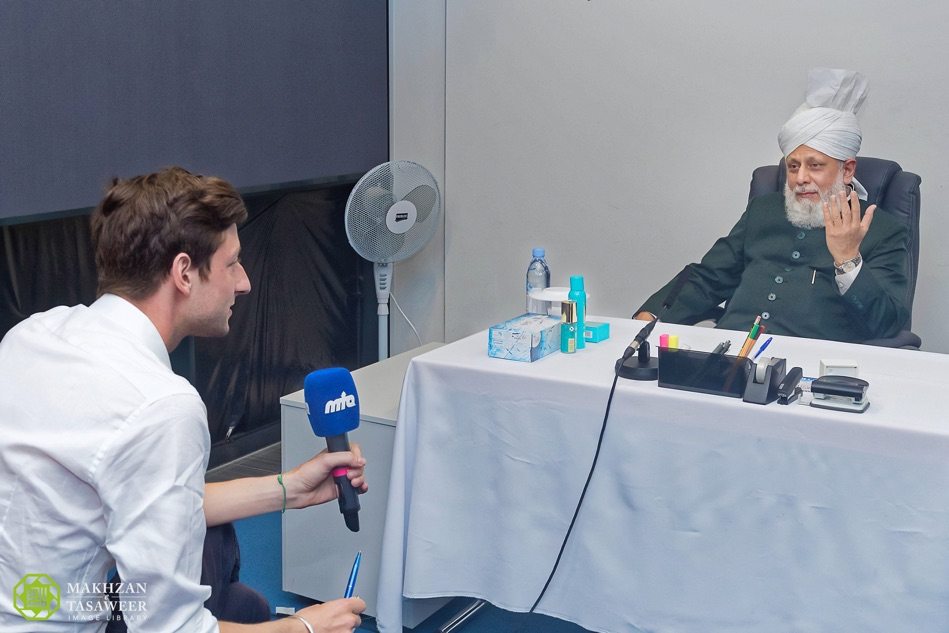 His Holiness said Islam teaches that God had sent prophets to all nations and Muslims were commanded to respect and honour them all, even whilst others cursed the Prophet of Islam (peace be upon him).

“No doubt, when we hear others unjustly malign our beloved Prophet (peace be upon him) it causes us intense distress and grievously wounds our hearts, yet we will never react by disrespecting the prophets or saintly figures of other religions and beliefs. In the face of hate and adversity, it is our faith which compels us to respond with love and to manifest peace at all times.” 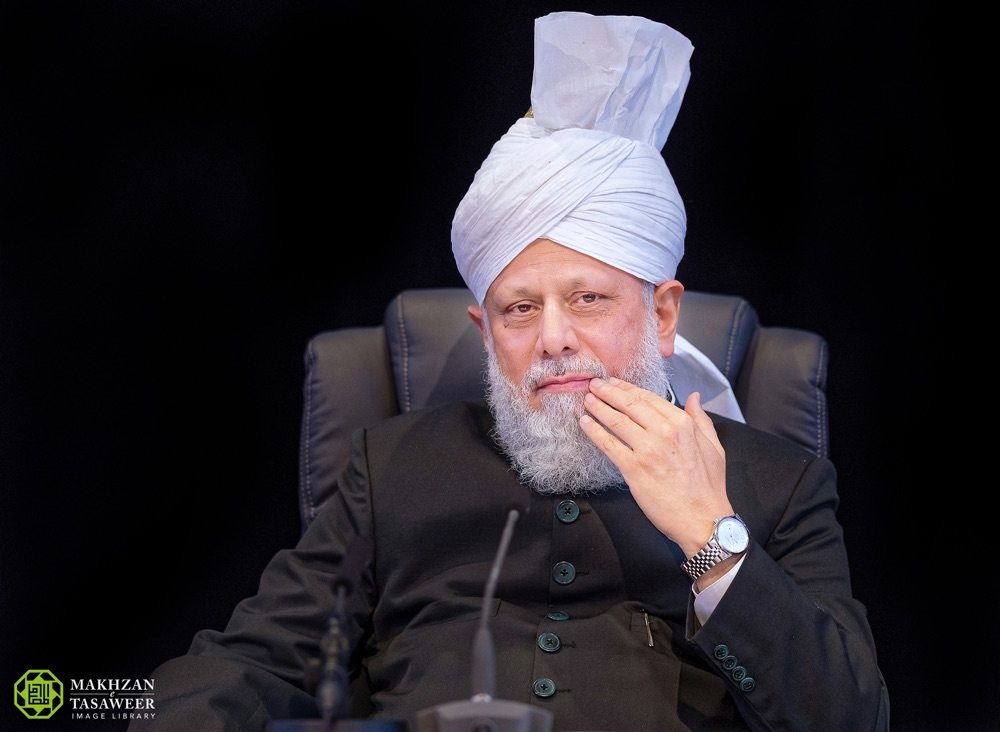 Answering the common allegation that Islam permitted aggression in order to force people into accepting Islam, His Holiness quoted chapter 10, verse 100 of the Holy Quran which explains that whilst Allah the Almighty had the power to compel mankind to accept Islam, He permitted free will.

His Holiness said that this did not mean that Muslims should not preach their religion, rather the Holy Quran commanded Muslims to inform people about Islam, but it was essential they preached their message with a

“spirit of tolerance and mutual respect.” 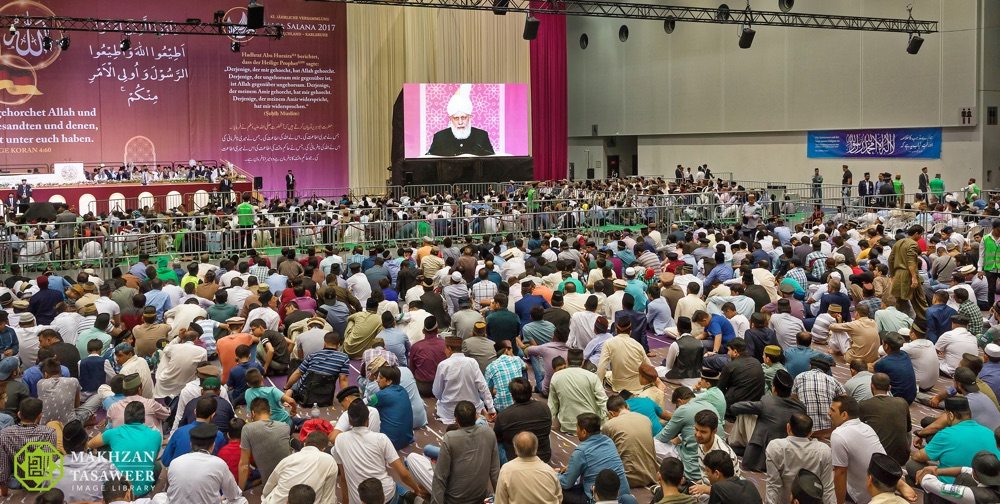 His Holiness presented the unparalleled example of benevolence and tolerance of the Holy Prophet Muhammad (peace be upon him) when he re-entered Mecca victoriously with ten thousand of his companions, after being forced to migrate from the city due to relentless persecution by the city’s non-Muslims.

Speaking of that moment when the Holy Prophet Muhammad (peace be upon him) returned to Mecca, Hazrat Mirza Masroor Ahmad said:

“At that moment of glorious triumph, the Holy Prophet (peace be upon him) exhibited supreme humility and forbearance by declaring that, in accordance with Islam’s peaceful teachings, all those who had tormented the Muslims were to be instantly forgiven.”

Later, His Holiness elaborated on his view that Muslims alone were not responsible for the various conflicts plaguing today’s world.

“Of the nine countries that have acquired nuclear weapons only one – Pakistan – is a Muslim nation. Hence it cannot be said that the Muslim world is the centre of these deadly weapons that constitute the greatest threat to the well-being of mankind.”

His Holiness said that where, on the one hand, non-Muslim nations were calling for peace in the Muslim world, they were also fuelling those very conflicts by producing the weapons used in those countries.

“Western countries and arms producers have a vested business interest in maintaining a degree of conflict in Muslim countries. Such one-eyed policies and selfish motivations are entirely regretful and can only prove a means of destroying the peace of the world.”

“The defining characteristic of the world’s efforts to ensure peace over the past seventy or more years has been intimidation and scare tactics, whereby nations have sought peace through the development of ever more deadly weapons. No matter what is claimed, the truth is that such measures cannot bring about long-lasting peace and there is every chance that one day someone will press the button unleashing carnage and misery like the world has never seen before.”

“Rather than peace-building through the so-called ‘deterrent model’, we Ahmadi Muslims, believe that there is only one path leading towards lasting peace and that is the path of God Almighty… As long as the world continues to prioritise material wealth and power we will not see true peace in the world.”

“The time has come for mankind to recognise its Creator and to accept that God Almighty is indeed the Lord of all the Worlds, who sustains us, provides for us and is our ultimate Creator.” 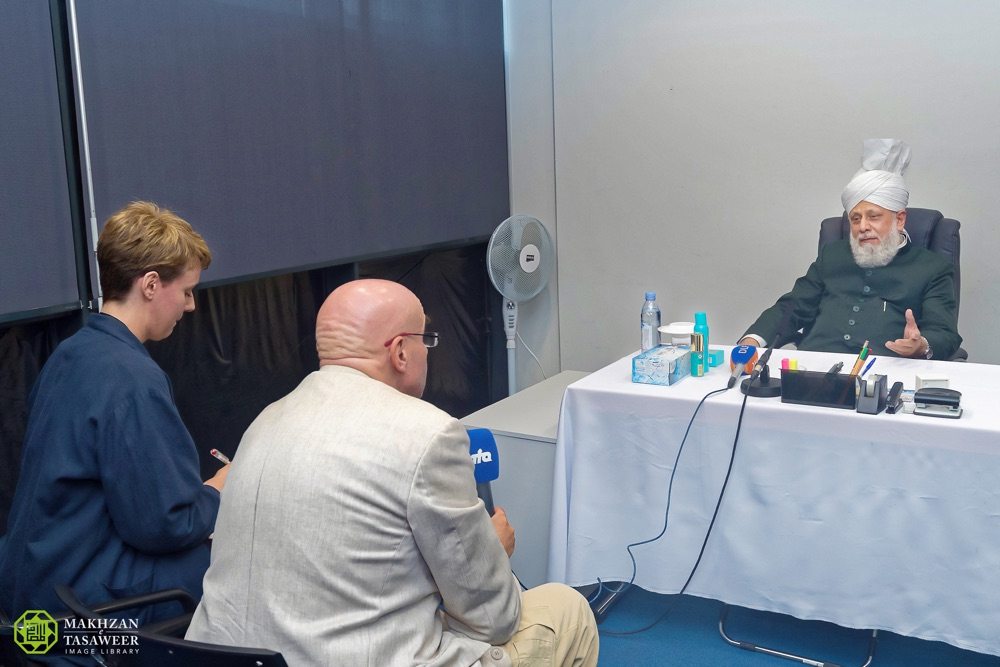 Earlier in the day, His Holiness, Hazrat Mirza Masroor Ahmad directly addressed the members of the Lajna Imaillah (Ladies Auxiliary Organisation) regarding the teachings of Islam in relation to the rights of women.

His Holiness said that from the very outset Islam had granted women the right to inheritance, marriage, divorce, freedom of expression, education and many other rights which the Western world has only afforded to women in recent times.

“Before the advent of Islam, Arabs were grieved to see the birth of a girl and some would go so far as to bury their new-born daughters. At a time of such supreme ignorance and cruelty, the Holy Prophet (peace be upon him) brought about a revolution in which he established the true status and honour of girls and proclaimed that the birth of a girl was cause for pride and joy.”

“Islam teaches that if you have faith in God, then rejoice upon the birth of a girl. Worldly people can only promise rewards of this life, whereas Islam promises the rewards of the afterlife for fulfilling the rights of women. How unfortunate it is that despite such beautiful teachings, it is alleged that Islam does not give rights to women.”

Later in the day, His Holiness held interviews with representatives of the German media and met delegations of guests attending the Jalsa Salana from various countries.