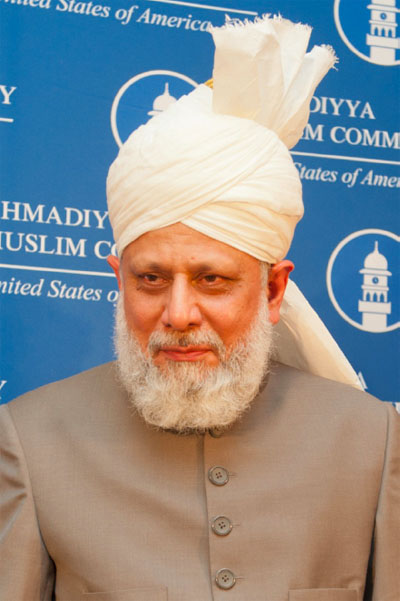 On 27 June 2012, Hazrat Mirza Masroor Ahmad was welcomed to Capitol Hill, in Washington D.C. where he delivered a keynote address entitled ‘The Path to Peace – Just Relations between Nations’ to an audience filled with more than 30 members of the United States Congress, including Honourable Nancy Pelosi, the Democratic Leader in the House of Representatives. 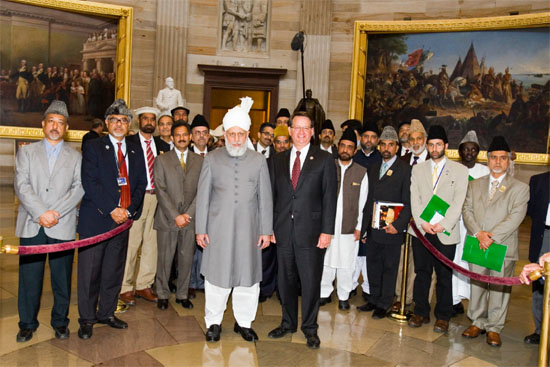 Following the event, His Holiness was given a tour of the Capitol Hill building, before being escorted to the House of Representatives where a Resolution was introduced in honour of his visit to the United States.

The introductory paragraph of the Resolution stated: 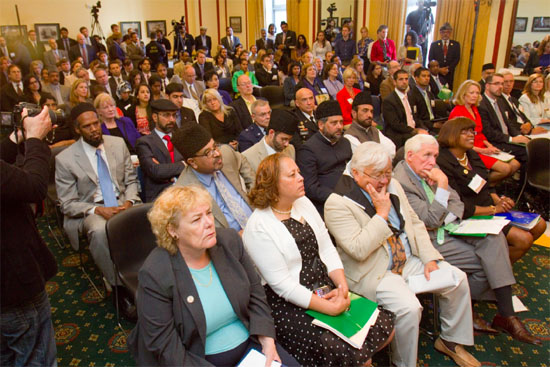 The event began at 9.55am with recitation of the Holy Qur’an by Maulana Azhar Hanif, before a welcome address was given by Amjad Mahmood Khan, the National Director of Public Affairs of the Ahmadiyya Muslim Community in the United States.

Senator Robert Casey (US-PA) welcomed His Holiness to the United States and said that he was greatly appreciative at having the opportunity to meet with him. He said:

“Your Holiness, I want to thank you for your great leadership and your commitment to peace, tolerance and justice.” 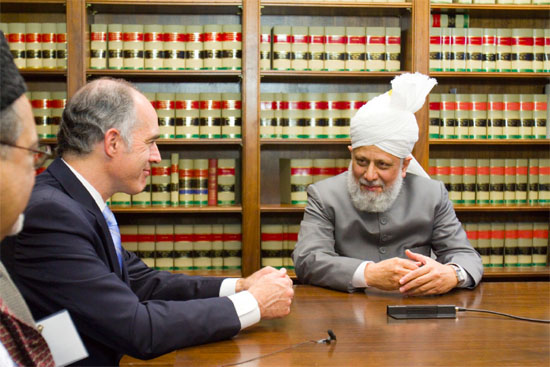 The first Muslim Congressman, Keith Ellison (US MN-5) said that the United States was ‘honoured by the presence of His Holiness’ and he said that under the leadership of its Khalifa, the Ahmadiyya Muslim Jamaat was proving to be a ‘true blessing for the people of the United States’.

Congressman Brad Sherman (US CA-27) said that he would be introducing the Congressional Resolution welcoming His Holiness to the United States in the House of Representatives immediately after the event. He also said that His Holiness was ‘a model of tolerance for the entire world.’

Katrina Lantos Swett, Chairwoman of the United States Commission on International Religious Freedom (USCIRF) said that she felt the entire room was filled with a ‘special blessing and undoubtedly it is a reflection of the blessing His Holiness brings to the Capitol’. She went on to speak about and condemn the continued persecution of Ahmadi Muslims in various countries. 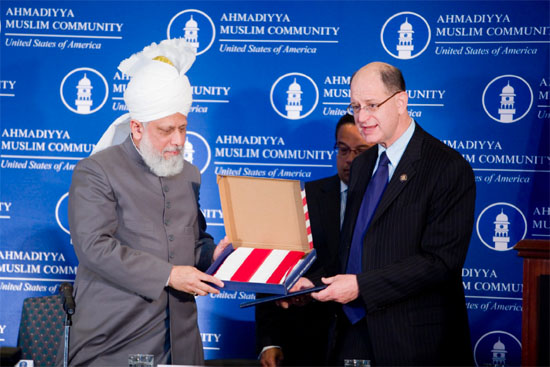 Congressman Frank Wolf (VA-10) welcomed Hazrat Mirza Masroor Ahmad to the United States and said that the Ahmadiyya Muslim Jamaat was ever ready to support all human rights efforts.

Congressman Mike Honda (CA-15) spoke about his pleasure at meeting His Holiness privately the evening before at the Baitur Rahman Mosque.

He said that he hoped that Ahmadis remained forever safe in the United States so that they could continue to propagate their message of peace. 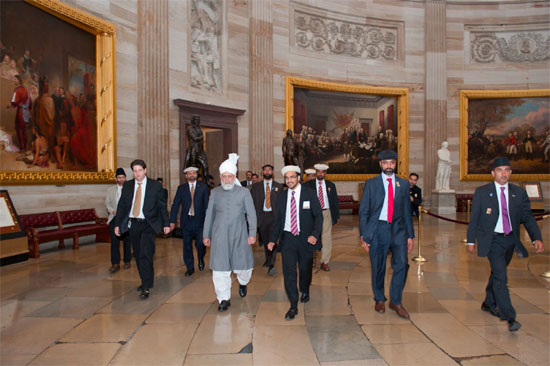 Thereafter a copy of the Special Congressional Resolution was presented to His Holiness by Congresswoman Zoe Lofgren (D-CA).

Democratic Leader, Congresswoman Nancy Pelosi said she was proud that such a bipartisan welcome had been given to Hazrat Mirza Masroor Ahmad. 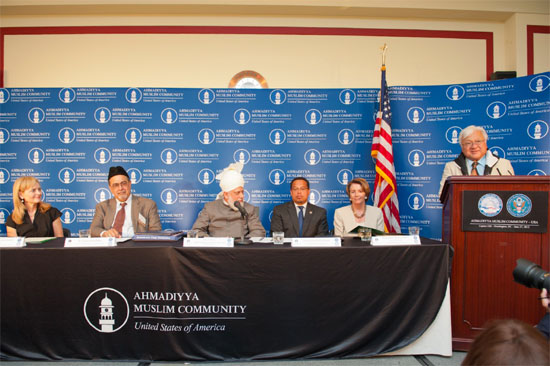 She said the leadership of Hazrat Mirza Masroor Ahmad was characterised by ‘wisdom and compassion’. She further said that despite facing grave persecution, ‘His Holiness has refused to turn to bitterness or vengeance’.

The keynote address of Hazrat Mirza Masroor Ahmad commenced at 10.40am. His Holiness enlightened the assembled audience about the teachings of the Holy Qur’an in terms of international relations. 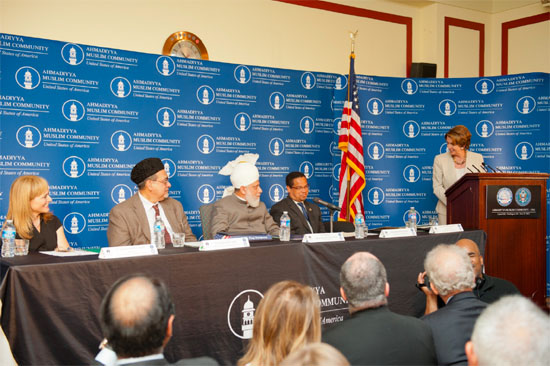 His Holiness said that the key principle in maintaining peace was true justice. 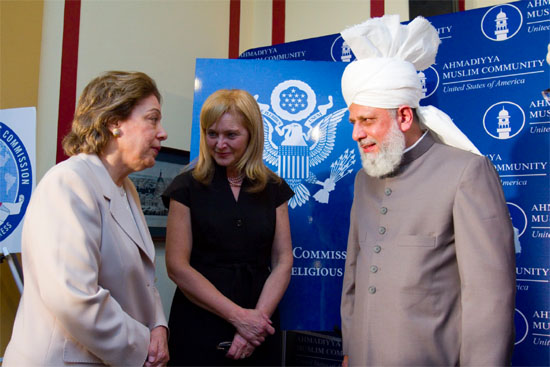 “The truth is that peace and justice are inseparable – you cannot have one without the other… Yet, in general, there is little doubt that restlessness and anxiety is increasing in the world and so disorder is spreading. This clearly proves that somewhere along the line, the requirements of justice are not being fulfilled.”

His Holiness said that Islam taught that all people were born equal and were deserving of equal human rights. 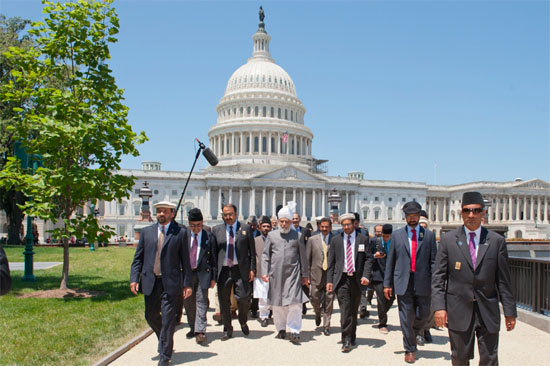 “In the Holy Qur’an, God Almighty has made it clear that whilst our nationalities or ethnic backgrounds act as a means of identity, they do not entitle or validate any form of superiority of any kind.” 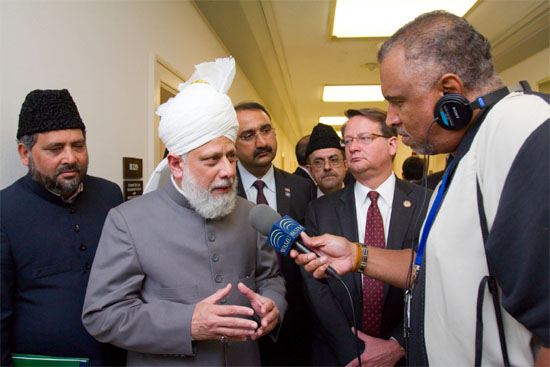 “Thus, it is a clear teaching of Islam that the people of all nationalities and all races are equal. And it is also made clear that all people should be granted equal rights without any discrimination or prejudice. This is the key and golden principle that lays the foundation for harmony between different groups and nations and for the establishment of peace.”

His Holiness said that wealthy nations should make great efforts to assist the developing countries; however they should not do so in an effort to fulfil vested or national interests. 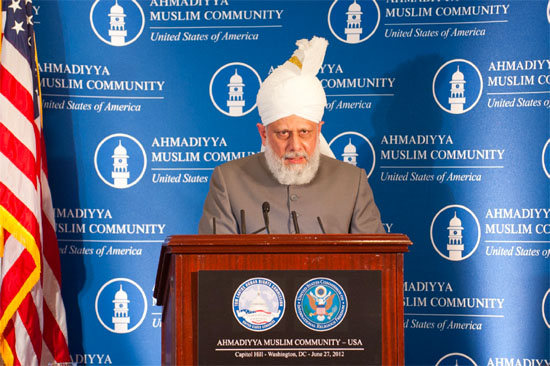 Rather they should act with a desire to serve humanity and with the ambition to end the restlessness and anxieties of those in need. 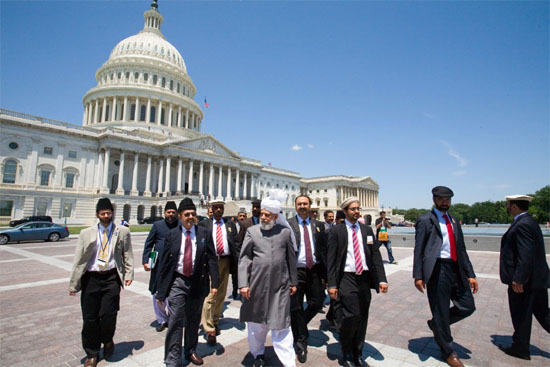 “The United States, as the world’s largest power, should play its role in acting with true justice and with such good intentions as I have described. If it does so then the world will always remember with great admiration your great efforts. It is my prayer that this hope becomes a reality.”

“There is no Khilafat among other Muslims, only among Ahmadi Muslims there is a Khilafat and people are coming to join us day by day” – Hazrat Mirza Masroor Ahmad more