On 4 December 2012, the World Head of the Ahmadiyya Muslim Jamaat and Fifth Khalifa, Hazrat Mirza Masroor Ahmad delivered an historic keynote address at the European Parliament in Brussels to a packed audience of more than 350 guests representing 30 countries.

The event was hosted by the newly launched ‘European Parliament Friends of Ahmadiyya Muslims Group’, whose Chair and Vice-Chairs all took to the stage to welcome Hazrat Mirza Masroor Ahmad. Martin Schulz MEP and President of the European Parliament also came to meet with His Holiness. 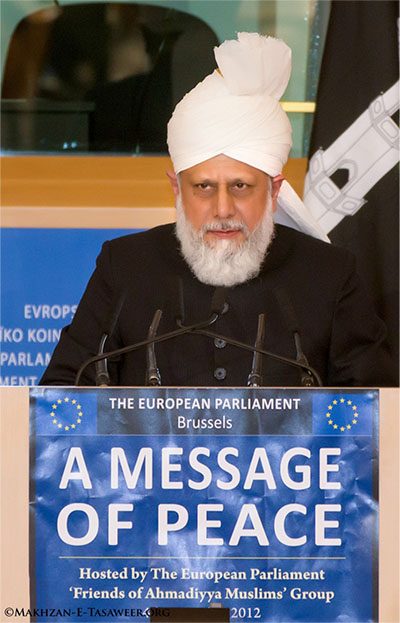 During his thirty-five minute address, Hazrat Mirza Masroor Ahmad called on the European Union to preserve its unity; addressed the issue of increased immigration to Western countries; advocated for equality in international relations and spoke at length about Islam’s key teachings in relation to developing world peace.

Hazrat Mirza Masroor Ahmad said that in the modern world many people viewed Islam as a religion that promoted violence and extremism and blamed it for many of the conflicts taking place in various parts of the world. He said that such allegations were particularly unjust given that “the very meanings of the word Islam are ‘peace’ and ‘security’.” 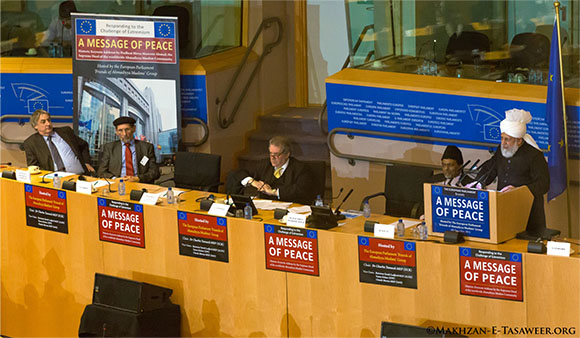 The Khalifa spoke about widespread concerns over increasing levels of immigration to Western countries.

In a detailed analysis, His Holiness said the issue was leading to the spread of ‘restlessness and anxiety’. His Holiness blamed both the immigrants and the indigenous people for the state of conflict, whereby many immigrants provoked locals by refusing to integrate, whilst certain segments of the local society were intolerant to outsiders. He said the consequences of such division were far reaching and so he called on all parties to work together to resolve the issues.

“Governments need to make policies that establish and protect mutual respect, through which hurting the sentiments of others or causing them any type of harm should be outlawed. With regard the immigrants, they must enter with a willingness to integrate with the local people, whilst the locals should be ready to open their hearts and display tolerance.” 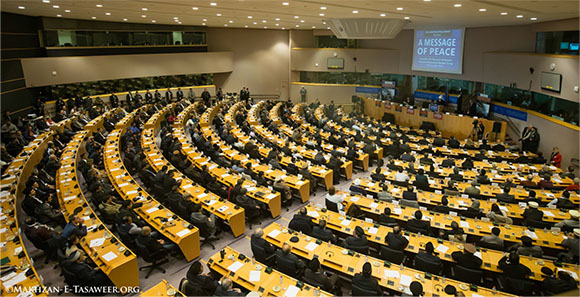 “The formation of the European Union has been a great achievement on the part of the European countries, for it has been a means of uniting this Continent. And so you should make all possible efforts to preserve this unity… Remember that the strength of Europe lies in it remaining united and together as one. Such unity will not only benefit you here in Europe but at a global level will be the means for this Continent to maintain its strength and influence.”

The Khalifa spoke of the need not just for co-operation within Europe, but called for global unity. His Holiness said: 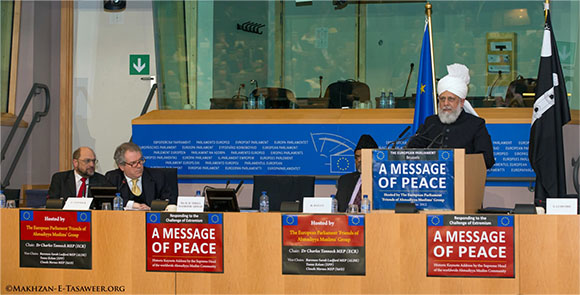 The Khalifa said that in the modern world countries could no longer afford to remain isolated and even global powers like the United States were dependent on international trade and foreign relations.

He said developed countries ought not to exploit weaker nations but should seek to help them develop and succeed.

Hazrat Mirza Masroor Ahmad also spoke about conflicts in the Arab World and Middle East. He said that whilst the Western world had openly expressed ‘outrage and concern’ at the situations in Syria and Libya, they did not seem as concerned about the plight of the Palestinian people.

“This perceived double standard is causing grievances and malice to increase in the hearts of people from Muslim countries against the major powers of the world. This anger and animosity is extremely dangerous and could boil over and explode at any time…

Let it be clear that I am not speaking in support or favour of any particular individual country. What I wish to say is that all forms of cruelty, wherever they exist, must be eradicated and stopped, regardless of whether they are perpetrated by the people of Palestine, the people of Israel or the people of any other country.”

The Khalifa also criticised the principle of veto power within international institutions. He said that the voting history of the permanent members of the United Nations Security Council showed that on certain occasions veto powers had been misused to assist cruelty, rather than to prevent it. 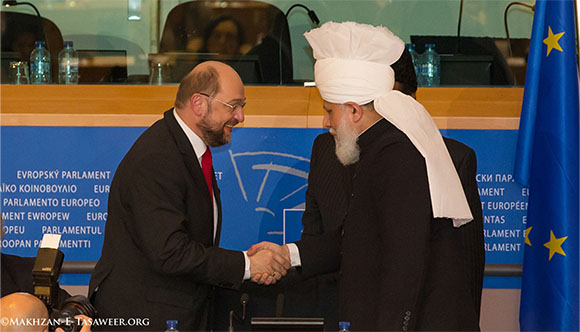 Hazrat Mirza Masroor Ahmad concluded by calling for justice and equality. He said:

“Always remember that peace can only be established by helping both the oppressed and the oppressor in a manner that is completely impartial, free from vested interests and devoid of all enmity. Peace is made by giving all parties an equal platform and playing field.”

Before the keynote address a number of MEPs took to the stage and spoke of their admiration of peaceful Islam as advocated by the Ahmadiyya Muslim Jamaat.

Dr Charles Tannock MEP, Chair of the European Parliament Friends of Ahmadiyya Muslims Group, said ‘Ahmadi Muslims are a welcome example of tolerance in the world.’ He condemned the persecution of Ahmadi Muslims in Pakistan and said ‘the Ahmadi motto of Love for All, Hatred for None is a welcome antidote to the extremist Jihadists’.

Tunne Kelam MEP, Vice-Chair of the European Parliament Friends of Ahmadiyya Muslims Group, said he was attending the event because it was an opportunity to ‘join in an aspiration for peace’. He praised the Ahmadiyya Muslim Jamaat for ‘rejecting all violence and terrorism’ and pledged to support the Jamaat globally.

Baroness Sarah Ludford MEP, Vice-Chair of the European Parliament Friends of Ahmadiyya Muslims Group, spoke of her long term relationship with the Ahmadiyya Muslim Jamaat in the United Kingdom. She said that the Jamaat’s motto was ‘an inspiration which we desperately need in the modern world.’

Jean Lambert MEP, Chair of European Parliament’s South Asia Delegation, said that she would pursue with the Pakistani Government the issue of Ahmadi Muslim voting rights. She said it was necessary that all parties had the right to vote freely and without discrimination.

The President of the Ahmadiyya Muslim Jamaat in the United Kingdom, Rafiq Hayat, also took to the stage to express his pleasure that the ‘European Parliament Friends of Ahmadiyya Muslims Group’ had been launched. 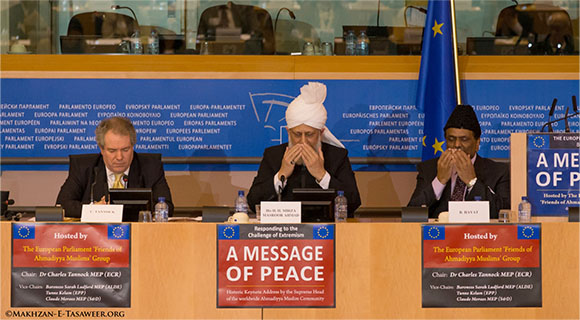 The historic event concluded at 4.35pm with a silent prayer led by Hazrat Mirza Masroor Ahmad.

Video of the Historic Address at European Parliament