Khuddam From Victoria, Australia Have Honour of Virtual Meeting with World Head of Ahmadiyya Muslim Community 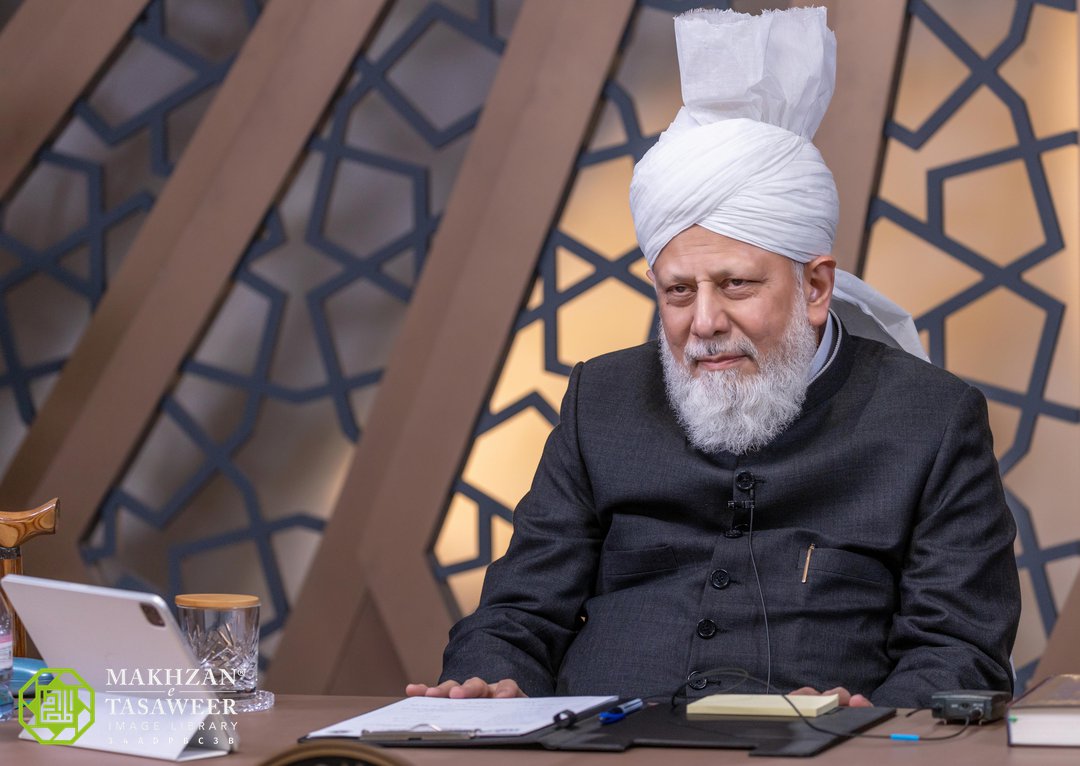 On 12 June 2022, the World Head of the Ahmadiyya Muslim Community, the Fifth Khalifa (Caliph), His Holiness Hazrat Mirza Masroor Ahmad held a virtual online meeting with members of Majlis Khuddamul Ahmadiyya (Ahmadiyya Muslim Youth Auxiliary) from the state of Victoria in Australia.

His Holiness presided the meeting from MTA Studios in Islamabad, Tilford, whilst the Khuddam joined the meeting virtually from the Bunjil Place Conference Centre, in Melbourne.

Following a formal session which began with the recitation of the Holy Quran, members of Majlis Khuddamul Ahmadiyya had the opportunity to ask His Holiness a range of questions regarding their faith and contemporary issues.

One of the Khuddam mentioned that he was a convert to the Ahmadiyya Muslim Community from Samoan background. He asked His Holiness how new converts to Islam should deal with the cultural traditions that are commonly practiced amongst their peoples and whether they should distance themselves from the different way of life of their ancestors.

“What we believe is that Allah the Almighty has sent prophets in every people and nation. They each brought the same teaching, that is, to bow before their Creator, perform their duties towards their Creator, and also they taught us good morals. That is common in every religion. And this is why, in the Holy Quran, Allah the Almighty instructed the Holy Prophet (peace and blessings be upon him) that ‘Say to the People of the Book that come together on common points between us’ and the most important of that is to worship One and Omnipotent God.’ So, what we believe is that although there are different tribes and nations, they were all trained by their prophets. The original teaching of each and every religion was to lead their people and tell them the message of Allah and that message is to bow before Allah the Almighty, the Creator and show good morals. Respect each other. That is the common thing.”

His Holiness also mentioned that the Holy Quran is that comprehensive book which incorporates within it all the good things from the previous prophets and Holy Books and also revealed further new teachings.

His Holiness went on to explain how a Muslim should determine which cultural traditions they may adopt. 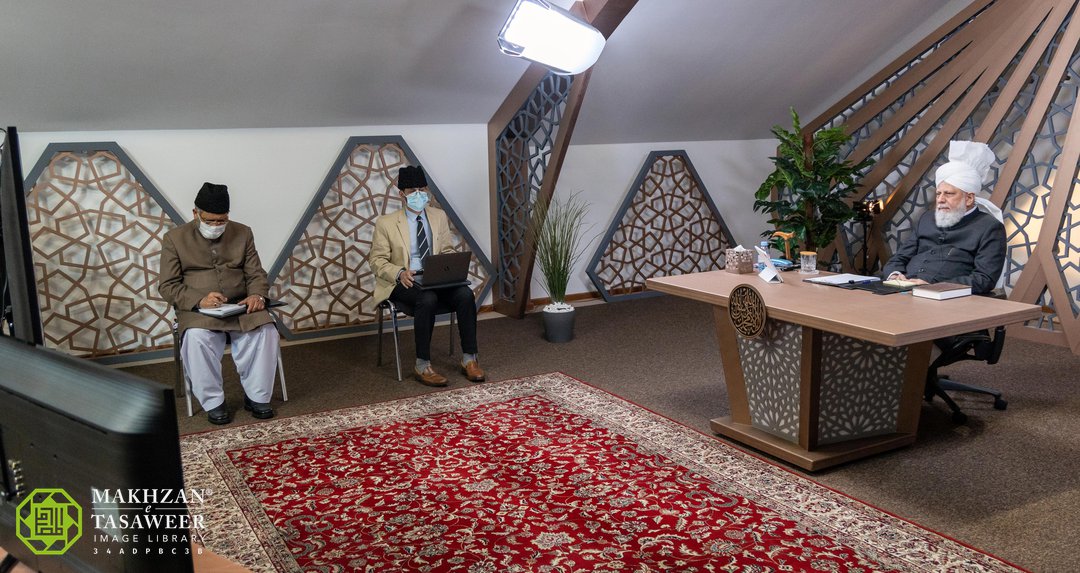 “One basic principle you must remember is that any tradition which denies the Oneness and Omnipotence of Allah the Almighty, should be rejected. Apart from that, there are some cultural traditions which have nothing to do with religion, which do not prohibit you from offering your five daily prayers, from keeping fast, from reading the Holy Quran, showing good morals. If it [a tradition] is not prohibiting you from doing this, then you can practice those traditions. But, other than that if there is any tradition which clashes with the teaching of Islam then you have to refrain from that. Other than that, no problem.”

Emphasising that Islam is a religion for all peoples, Hazrat Mirza Masroor Ahmad said:

“You see, Islam is a universal religion. People from all across the world have joined Islam and are still joining Islam. Every nation, every people, every tribe has different traditions. So, they can practice their tradition as long as they are not clashing with the basic teachings of Islam. So, for celebrating a marriage ceremony, different tribes have different traditions. You can perform that, if it is not clashing with the teachings of Islam. If it is not denying the concept of Oneness of Allah the Almighty, then you can do it. So the sanctity of Allah the Almighty should always remain intact whenever you are doing anything. That is the basic thing.”

Another attendee who had sought refuge in Australia after migrating from Afghanistan due to religious persecution, asked His Holiness how he sees the future of the Ahmadiyya Muslim Community in Afghanistan.

“You have left Afghanistan and others are leaving the country too. So how can there be a [positive] future? The Ahmadi Muslims that are still there are also leaving. The Promised Messiah (peace be upon him) stated when Sahibzada Abdul Latif Shaheed was martyred [in Afghanistan] that, ‘O unfortunate land, you have fallen in the eyes of God.’ So it will remain fallen until Ahmadi Muslims are able to prosper in the country. As All Ahmadi Muslims emigrate from there, it will fall further still. For every nation, there are eras of progress and degeneration. Once the downfall reaches its darkest stage, then Allah the Almighty changes their states. Once their deterioration reaches its worst moment and Ahmadi Muslims all leave the country and the situation reaches the height of destruction, it is possible then that a person may come in the country who begins to re-establish it and religious freedoms are re-instated and the Ahmadiyya Muslim Community spreads again. Then the future can be brighter again for the country. At this present stage however, I cannot see any positive future. You have come here [to Australia] and so you should continue to pray for the country. Who can pray for it more earnestly than you, since you have sympathy for your country.” 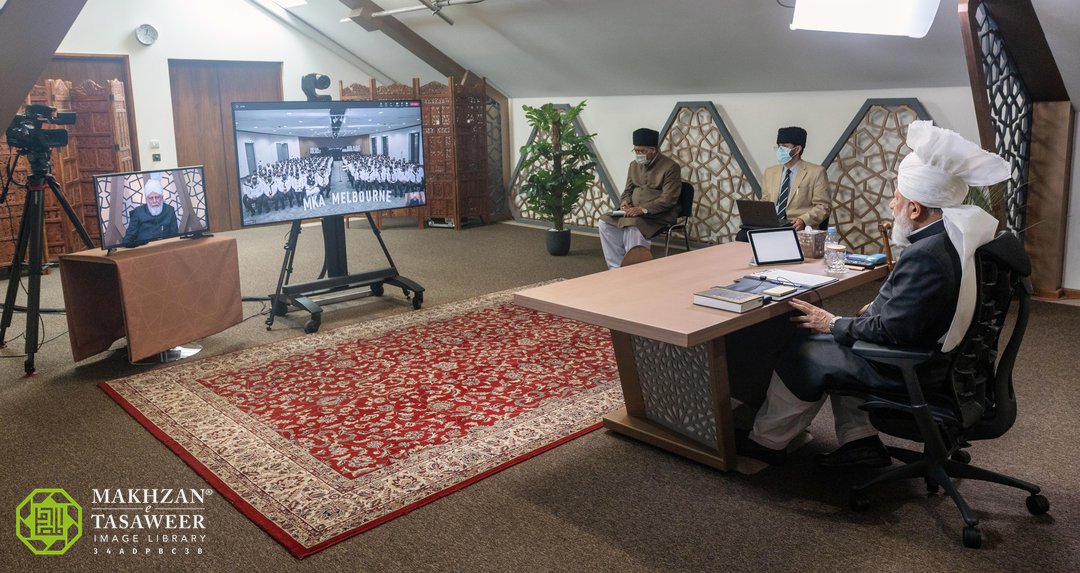 Another question was also asked about the future of the Ahmadiyya Muslim Community whereby the Khadim mentioned that in Islamic history, a wide-scale change and conversion to Islam occurred after some significant events, such as the Victory of Makkah or the Migration to Medina. He asked if the Ahmadiyya Muslim Community will also see rapid growth after some major events.

“You are a born Ahmadi Muslim. So, try to understand why you are an Ahmadi Muslim. [If] you yourself do not know what is Ahmadiyyat, how can you tell your people that you are an Ahmadi Muslim? …When your fellow students and fellow friends will see that there is some significant change in you, that you are different from the other Muslims, you offer the five daily prayers, you read the Holy Quran, you know the meaning of the Holy Quran, you are morally good, you are not involved in any bad practice, then they would know that these are the people who are different from us. And then they would try to listen to you. If they are Muslims, you can tell them, this change in me is only because of my acceptance of the Promised Messiah (peace be upon him).”

“Quite a number of new converts have completely changed their behaviour, their attitude, their whole life style. And, after having seen them, their close relatives, their friends have asked them, ‘How did this change come to happen in you?’ And they would explain the reason that, ‘Because now I have seen the true teachings of Islam and I am practising it. This is why it has changed my whole life-style and now I am a practising Muslim.’ So, if you set your own example before your fellow friends, before non-Ahmadis, then they would know that, ‘He is an Ahmadi Muslim boy. Even at this young age he has close relation with Allah the Almighty, he offers five daily prayers, he reads the Quran, he practices what he says. Then they will listen to you. And this is how you can remove the negative opinion about you from the minds of those people. So, you will have to change yourself. First you should understand what you are.”

Up to 30,000 expected to attend the Jalsa Salana at Hadeeqatul Mahdi in Alton, Hampshire over the next 3 days more

“Have certainty that Allah the Almighty exists and that He accepts your prayers.” – Hazrat Mirza Masroor Ahmad more