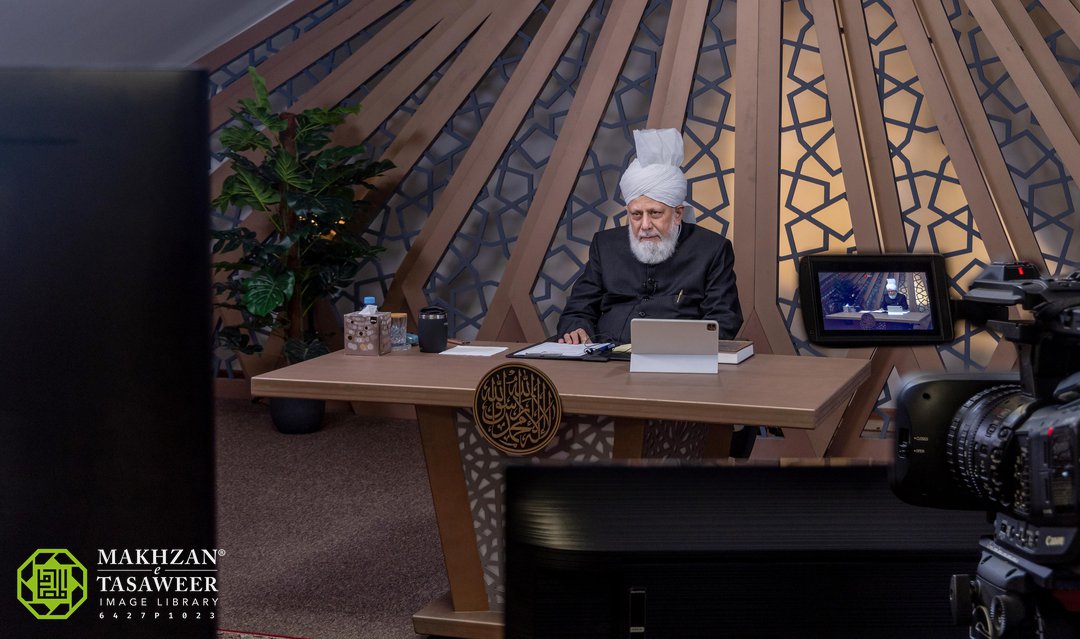 His Holiness presided the meeting from MTA Studios in Islamabad, Tilford, whilst the Amila members joined from the Baitul Mujeeb Mosque in Brussels. 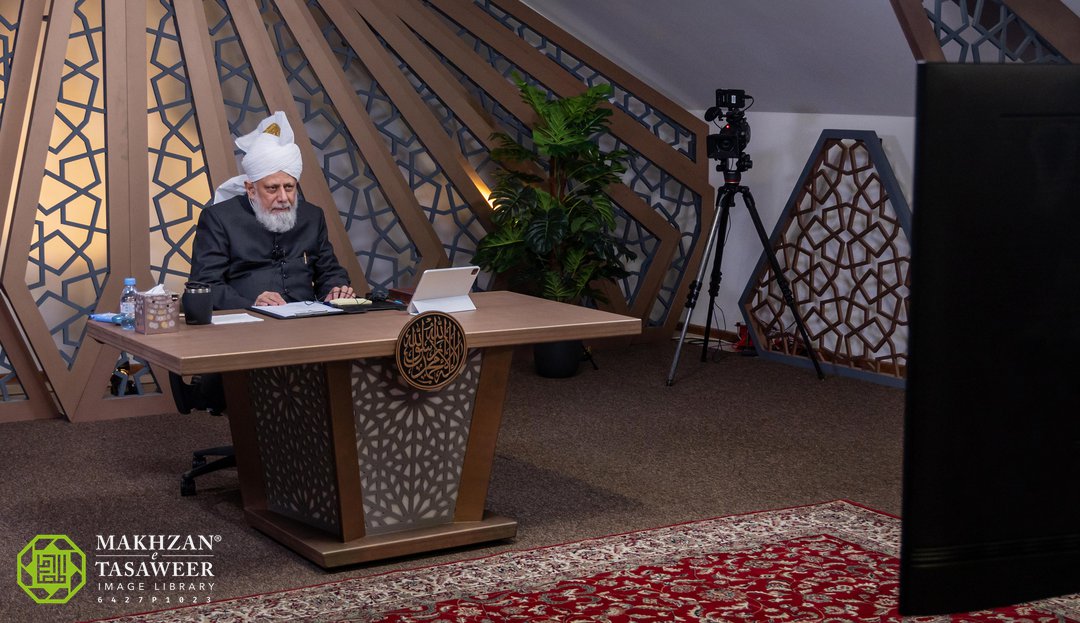 During the meeting, His Holiness emphasised the importance of conveying the peaceful message of Islam to the public and His Holiness instructed that Lajna Imaillah should set ambitious targets in this regard.

Speaking about the importance of conveying Islam’s message to the people in Belgium, Hazrat Mirza Masroor Ahmad said:

Advising the Secretary Tarbiyyat, responsible for the moral and spiritual training of Lajna members, about the training of their children, Hazrat Mirza Masroor Ahmad said:

“Converse with your children on religious matters so that they learn the faith. Ask the mothers to hold discussions on religion at home.”

The Secretary mentioned that they wish to create awareness about the issues mothers are facing in raising their children in the modern environment.

Advising her on how to do so in an effective way, Hazrat Mirza Masroor Ahmad said:

“It is good to do so and you should create a list of the issues they face. Solutions to almost all the issues have been explained in various speeches and sermons, and in the sayings of the Holy Prophet Muhammad (peace and blessings be upon him) and in the Holy Quran. Find the answers to the issues from there and make them accessible for the mothers so they know how to reply to the questions of their children. Between the fathers and their children and between mothers and children, there ought to be a real friendship so that the children share their issues with them. Unless the children develop a habit of sharing their problems with their parents, there will continue to be problems that arise in the upbringing of the children. Ask the daughters what their concerns are and then also speak to the mothers. Also ask boys under the age of fifteen. Those above the age of fifteen, ask them too with the help of Majlis Khuddamul Ahmadiyya.” 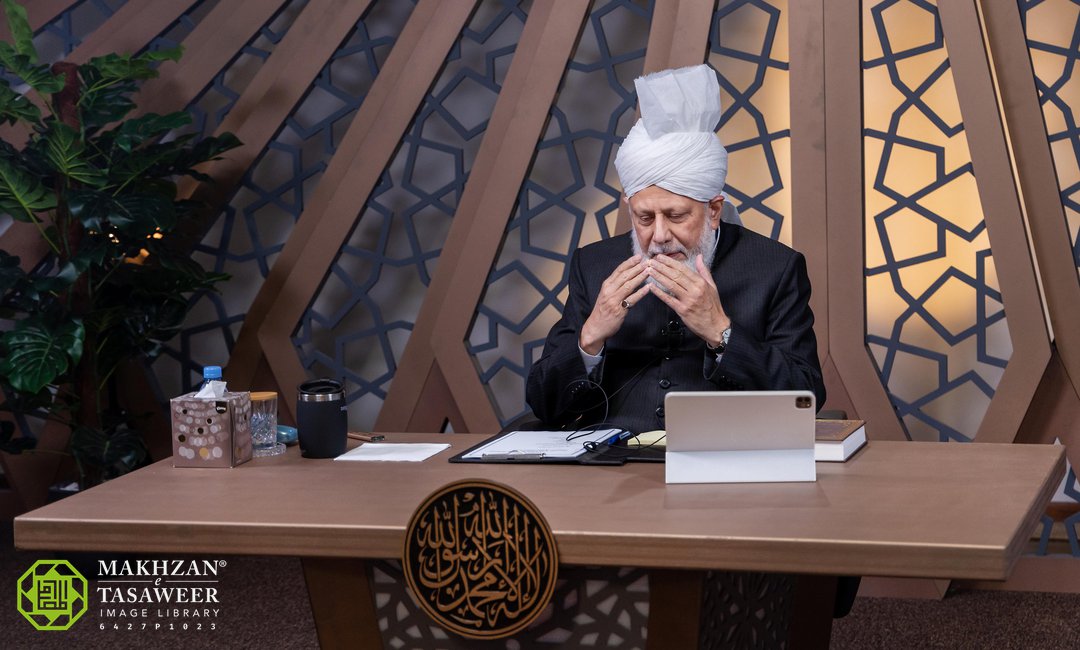 A Lajna member asked His Holiness how to motivate older girls to participate in the activities of the Ahmadiyya Muslim Community, given the fact that some girls become less inclined towards participating actively as they enter their teens.

“They become less engaged because their mothers are not so interested in religion. I have already mentioned the importance of mothers developing a bond of friendship with their children and conversing with them about religious matters from a young age. In addition, you should make programmes which are truly of interest for the girls of that age. When the girls come to the events, of course tell them about the teachings of the Holy Quran and the sayings of the Holy Prophet Muhammad (peace and blessings be upon him) but also ask them what they would like at the events so that they become more interested. You can make your programmes in a way that they are religious and they also cater for the needs of such girls.”

The secretary responsible for arranging Waqf-e-Ardhis where Lajna members dedicate a period of at least two weeks to serve the Ahmadiyya Muslim Community, asked His Holiness how Lajna can do Waqf-e-Ardhi.

“Just as you are able to do all your other work and go out, you should also do Tabligh and Waqf-e-Ardhi. If you do not wish to go out of your home city then you can distribute literature to propagate the peaceful message of Islam to the general public within your own city. Take your son or daughter with you and distribute literature and tell people how you have freedom as a Muslim woman and you also wear the hijab and what it means for you. Do not got into areas which are unsafe, however. Also make personal contact with people and expand your circle of contacts and tell them about the true peaceful message of Islam.”

“Similarly for Waqf-e-Ardhi you can present your services for teaching the Holy Quran to Ahmadi Muslims and for other Tarbiyyat related tasks… Men also do this and so you should serve just like men do. What is the difference between men and women in achieving this task? Just as the men carry out their tasks, so should you. Find out what the men do and women can serve in a similar way. On the one hand you speak of the rights of women and that men and women are the same. So when men and women are equal then you should serve just as the men do. You should not harbour any fear or reservations.”