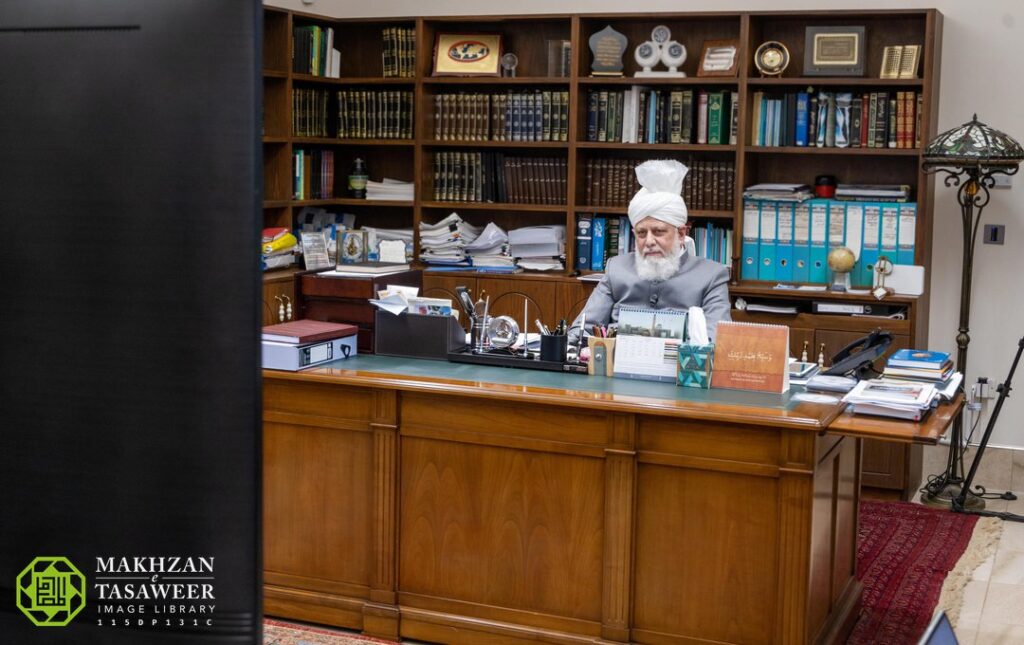 His Holiness presided the meeting from his office in Islamabad, Tilford, whilst the Amila members joined from the Baitur Rahman Mosque complex, in Maryland, USA. 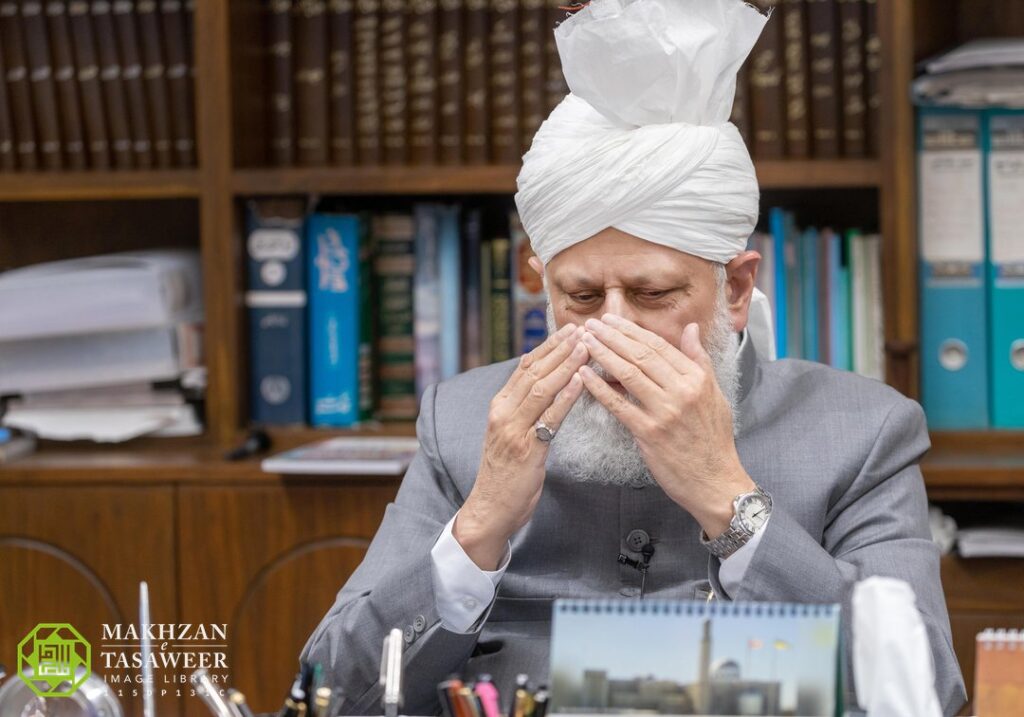 During the meeting, His Holiness outlined the various responsibilities assigned to the respective Lajna Amila members and gave guidance on improving the activities of their departments.

“In all respects the office bearers should set their own good example. If they are active in offering their daily prayers, if they are regular in following the instructions of the centre, including your own Amila members in the centre, then you will achieve good results. If Amila members are active from the grassroots level up to the national level, it will mean that at least 50% or more of your membership will be active in participating in your activities and programmes… So, start from your ‘home’ first and your home is the Amila.”

His Holiness also instructed the Nasirat Secretary, responsible for the training of girls aged 7-15, to accurately monitor the number of Nasirat offering their five daily prayers and reciting the Holy Quran and said that programmes should be made to encourage them to regularly read and better understand the Holy Quran.

“You should try to hold seminars and conferences on women’s rights in Islam through the Lajna public affairs department and invite non-Muslims to these events. Then they would know what the true Islamic teachings are and the efforts of the Ahmadiyya Muslim Community.”

Speaking to the Tarbiyyat Nau-Mubayiat Secretary, responsible for the training of new converts to the Ahmadiyya Muslim Community, Hazrat Mirza Masroor Ahmad said:

“You should see the backgrounds of different people and try to cater for their moral and religious training and education according to their backgrounds. You cannot just make one plan and programme for each and every new convert. Those who have Christian backgrounds, tell them what is the Holy Quran, Hadith and history of the Holy Prophet (peace and blessings be upon him) and many other things… There are some from amongst Buddhists or Hindus too. From amongst Muslims, some of them have Arab backgrounds and some are Asian and others of Indo-Pakistani backgrounds. So you will have to make your plan according to their individual conditions.”

His Holiness also said to the Secretary responsible for engaging with the media, that they should make personal contacts with female journalists so they can better understand the message of Islam.

As the meeting concluded, the President of Lajna Imaillah asked His Holiness how they can ensure that Ahmadi Muslim youth remained attached to their faith and religion.

“Your duty is to just keep on reminding people and advising them and pray for them as well. It should not be that after some time you give up. Since they claim themselves to be an Ahmadi Muslim…then it is our duty to use all means to keep them in the fold of the Ahmadiyya Muslim Community according to the way that has been prescribed in our literature and most importantly in the Holy Quran. So tell them that these are the instructions of the Holy Quran. The Holy Quran tells us to wear modest dress…There are many other instructions too; reciting the Holy Quran, offering the five daily prayers.”

“Keep on reminding them gently with love, with care. They should also realise that you are their sympathisers and that whatever you are doing is for their betterment and you are trying to save them from the wrongs of the society. Once they realise it, then they will one day follow you. And pray for them and never give up. You have to be very much persuasive, that is your duty. Indeed, that is the commandment given in the Holy Quran that, “Admonish, therefore, for thou art but an admonisher.” That is the injunction given to the Holy Prophet (peace and blessings be upon him) that, keep on advising them, keep on guiding them. Try to explain to them the good teachings of Islam.”

“The nations that progress are those who keep their shortcomings in view and try to improve upon them.” – Hazrat Mirza Masroor Ahmad more

“Develop the realisation that we are the ones who are to (morally) reform the world and, it is our job to guide others rather than following the world ourselves.” – Hazrat Mirza Masroor Ahmad more

“Just as the sun rises without fail each morning, our each and every day should give rise to glad tidings of the spiritual progress and advancement of the members of the Community.” – Hazrat Mirza Masroor Ahmad more

…I have been constantly telling people of the world – to the politicians and leaders – that they should change themselves and try to establish true and absolute justice in the world and discharge their duties towards their Creator and their fellow beings.” – Hazrat Mirza Masroor Ahmad more