Last night, the World Head of the Ahmadiyya Muslim Jamaat, Hazrat Mirza Masroor Ahmad, the Fifth Khalifa, spoke at length about the perilous state of the world and the impending threat of a nuclear war.

Whilst addressing the 9th Annual Peace Symposium, held at the Baitul Futuh Mosque in Morden and organised by the Ahmadiyya Muslim Jamaat in the UK, His Holiness also sent a message of congratulations and prayers to Her Majesty, Queen Elizabeth II upon the Diamond Jubilee.

The event attracted an audience of more than 1,000 people, including Government Ministers, Ambassadors of State, Members of both the House of Commons and the House of Lords, the Mayor of London and various other dignitaries and guests from all walks of life. The theme of this year’s Symposium was ‘International Peace’.

In his welcome address, Rafiq Hayat, the National President of the Ahmadiyya Muslim Jamaat in the UK said that under the leadership of its Khalifa, the Ahmadiyya Community was constantly engaged in promoting values of peace, tolerance and loyalty to one’s country.

Siobhain McDonagh, MP for Mitcham & Morden and Chair of the UK All Party Parliamentary Group for the Ahmadiyya Muslim community, said that though progress had been made, there was still a much to achieve in terms of making sure that all people around the world were granted religious freedom. 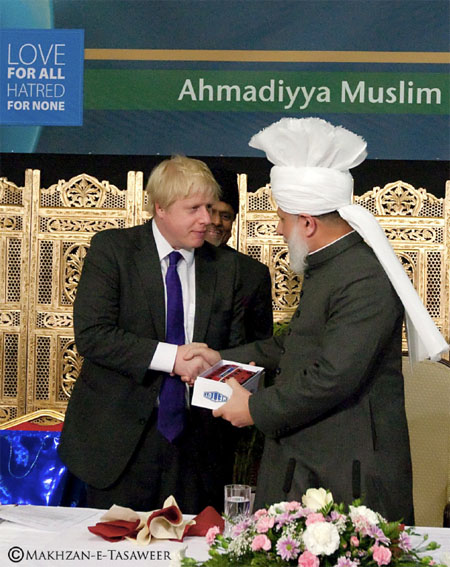 The Mayor of London, Boris Johnson, thanked the Ahmadiyya Muslim Jamaat for ‘contributing in so many ways’ towards promoting peace and tolerance in London and bringing people together. He pledged to always support the Jamaat and its charitable work.

Rt Hon Ed Davey MP, Secretary of State for Energy & Climate Change, said that Hazrat Mirza Masroor Ahmad was a ‘ great leader for peace’. He also spoke about the risk of climate change and its effects on food and water security in the world.

Stephen Hammond MP, read out a message from Rt Hon Eric Pickles MP, the Secretary of State for Communities and Local Government, in which he praised the Ahmadiyya Muslim Jamaat for promoting tolerance throughout Britain’s communities.

Andrew Stunnell OBE MP, said the UK Government very much appreciated the efforts of the Ahmadiyya Muslim Jamaat towards promoting charitable works and community cohesion. He said it was his first visit to the Baitul Futuh Mosque and found it to be a ‘very impressive building’ .

Lord Eric Avebury said that not enough was being done to prevent wars and conflicts. He said to simply walk away from such challenges would be ‘morally wrong’. He said that despite being a victim of persecution in a number of countries, the Ahmadiyya Muslim Jamaat was leading the way in striving for peace throughout the world.

The 3rd Annual ‘Ahmadiyya Muslim Prize for the Advancement of Peace’ was presented by Hazrat Mirza Masroor Ahmad to the charity ‘SOS Children’s Villages UK’ in recognition of its continued efforts to alleviating the suffering of orphaned and abandoned children around the world and towards fulfilling its vision of ‘a loving home for every child’. Accepting the award on behalf of the charity was its UK President, Dame Mary Richardson DBE, who said it was essential to always put the welfare of children first. 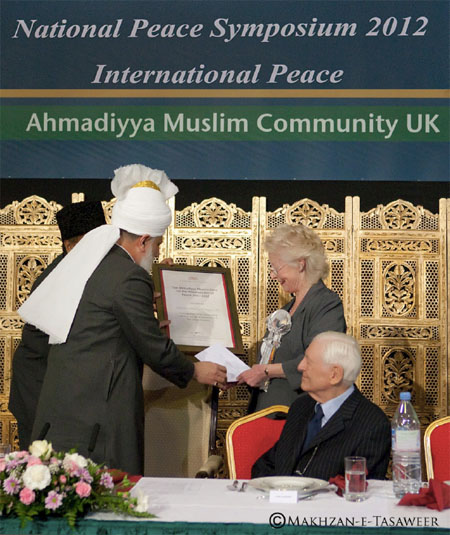 The highlight of the evening was the keynote address given by Hazrat Mirza Masroor Ahmad in which he spoke about the need for all people and organisations to promote peace and justice; the discord within various countries; the rise of terrorism and extremism; the devastating effects of a potential nuclear war and the efforts of the Ahmadiyya Muslim Jamaat to promote peace in the world based on the true teachings of Islam.

At an international level, governments and nations were jealously eyeing up the resources of other countries whilst major powers were consumed by a desire to maintain their power. Furthermore terrorists were waging wars and killing innocent people to fulfil only their own vested interests. His Holiness said that all of these issues were serving to completely undermine international peace and security.

Speaking about the need for justice in terms of international relations, His Holiness said:

“Unfair lobbying techniques, based on wealth and influence, should be abandoned. Instead the representatives and ambassadors of each nation should come forward with sincerity and with a desire to support the principles of fairness and equality. We must eliminate all forms of bias and discrimination, as this is the only means to bring about peace.”

Despite the worrying state of affairs, His Holiness counselled that it was essential that those who desired peace did not become disheartened and frustrated. Instead they needed to increase their efforts to bring about real and positive change in the world.

“I would request all of you to strive for peace to the best of your abilities so that we can keep the flicker of hope alight, that a time will come when true peace and justice will be established in all parts of the world.” 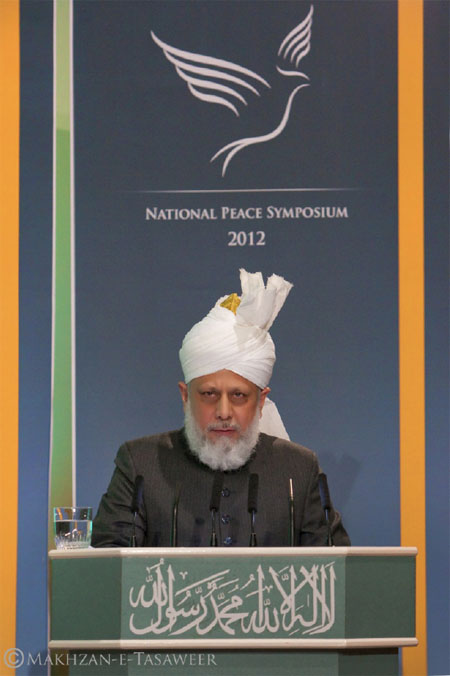 His Holiness cautioned that if immediate action was not taken to establish peace then the alternative was truly frightening. One likely scenario would be the outbreak of a nuclear war in which the majority of the world would be consumed and whose consequences would last for generations to come. Citing the example of Japan, His Holiness said that the nation and people of Japan, were more fearful and horrified by the prospect of war than any other and this was because Japan was the one country that had been targeted by nuclear bombs. Though seven decades had passed the country was still bearing the scars and effects of World War II.

“If a nuclear war breaks out, we will find that people will instantly die and freeze like statues, and their skin will simply melt away. The weapons available today are so destructive that they could lead to generation after generation of children being born with severe genetic or physical defects. Drinking water, food and vegetation will be all contaminated by radiation. We can only imagine what type of diseases such contamination will lead to.”

“It is my ardent wish and hope that the leaders of all major nations come to understand this dreadful reality. And so instead of adopting aggressive policies and utilising force to achieve their aims and objectives, they strive to adopt policies that promote and secure justice.”

Speaking about the efforts of the Ahmadiyya Muslim Community towards developing peace and tolerance throughout the world, His Holiness said such efforts were inspired by the teachings of the Holy Prophet Muhammad (peace and blessings of Allah be upon him). 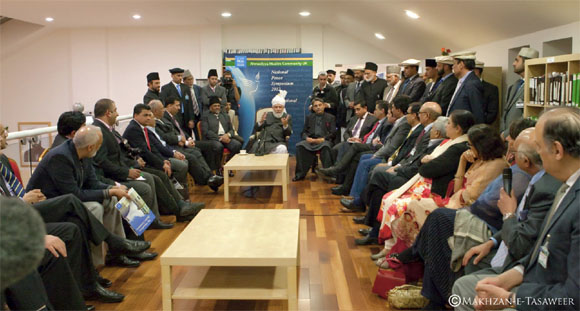 In conclusion, Hazrat Mirza Masroor Ahmad spoke of the Diamond Jubilee celebrations taking place this year. He said that in 1897, the Founder of the Ahmadiyya Muslim Jamaat, had congratulated Queen Victoria on her Diamond Jubilee and offered prayers for her and praised her Government’s commitment to freedom of religion. His Holiness said that using the same words used by the Promised Messiah, he too offered congratulations and prayers for Her Majesty, Queen Elizabeth II. Offering his congratulations, His Holiness said:

“May our congratulations filled with happiness and gratitude to our compassionate Queen be conveyed. And may the honourable Queen always be kept happy and contented.”

And then the world leader of the Ahmadiyya Muslim Jamaat took the opportunity to pray for Queen Elizabeth II. His Holiness said:

Following the conclusion of proceedings, His Holiness met personally with the various dignitaries, guests and also held a press conference the assembled media.

Please note that also in attendance were: