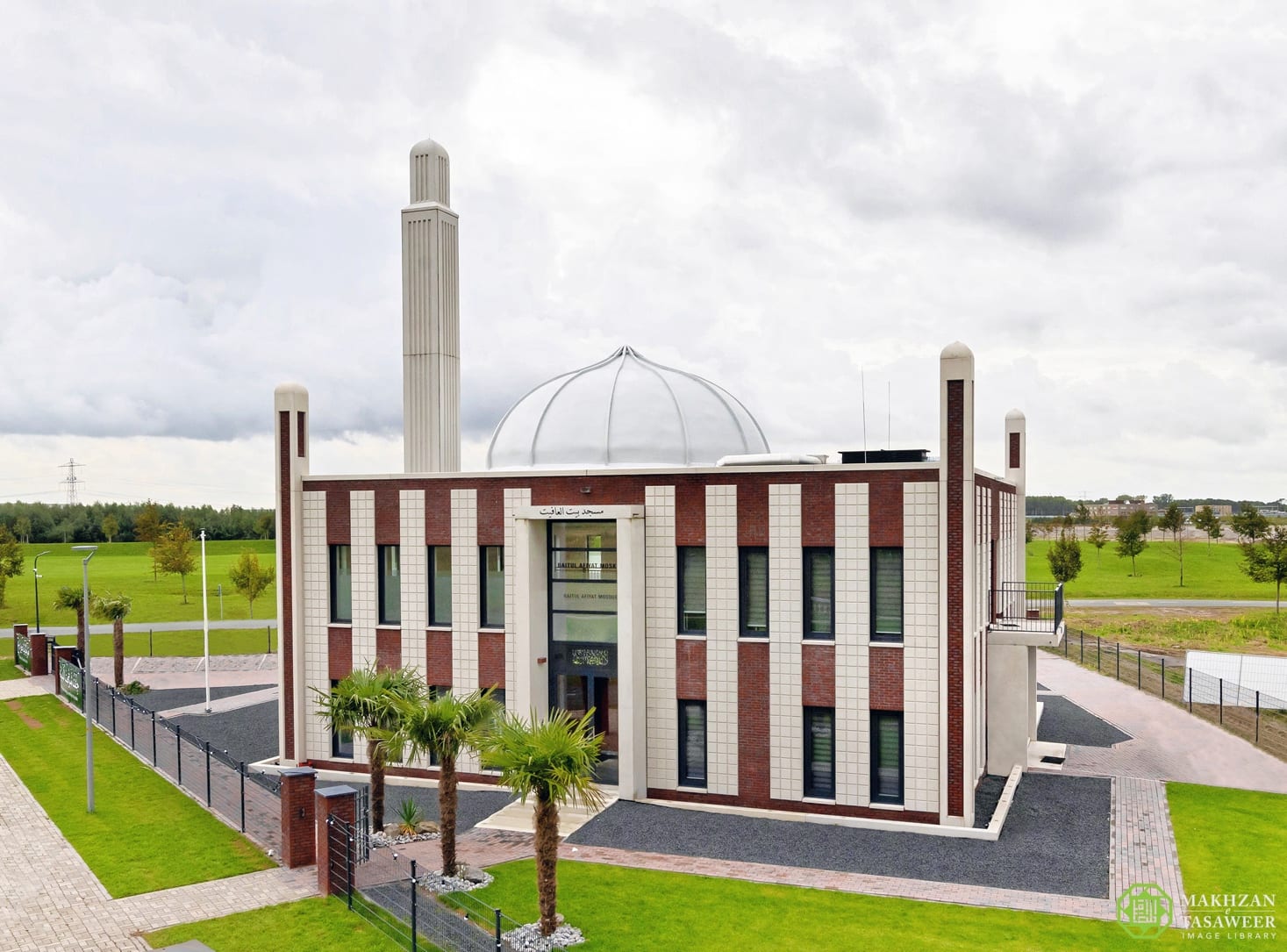 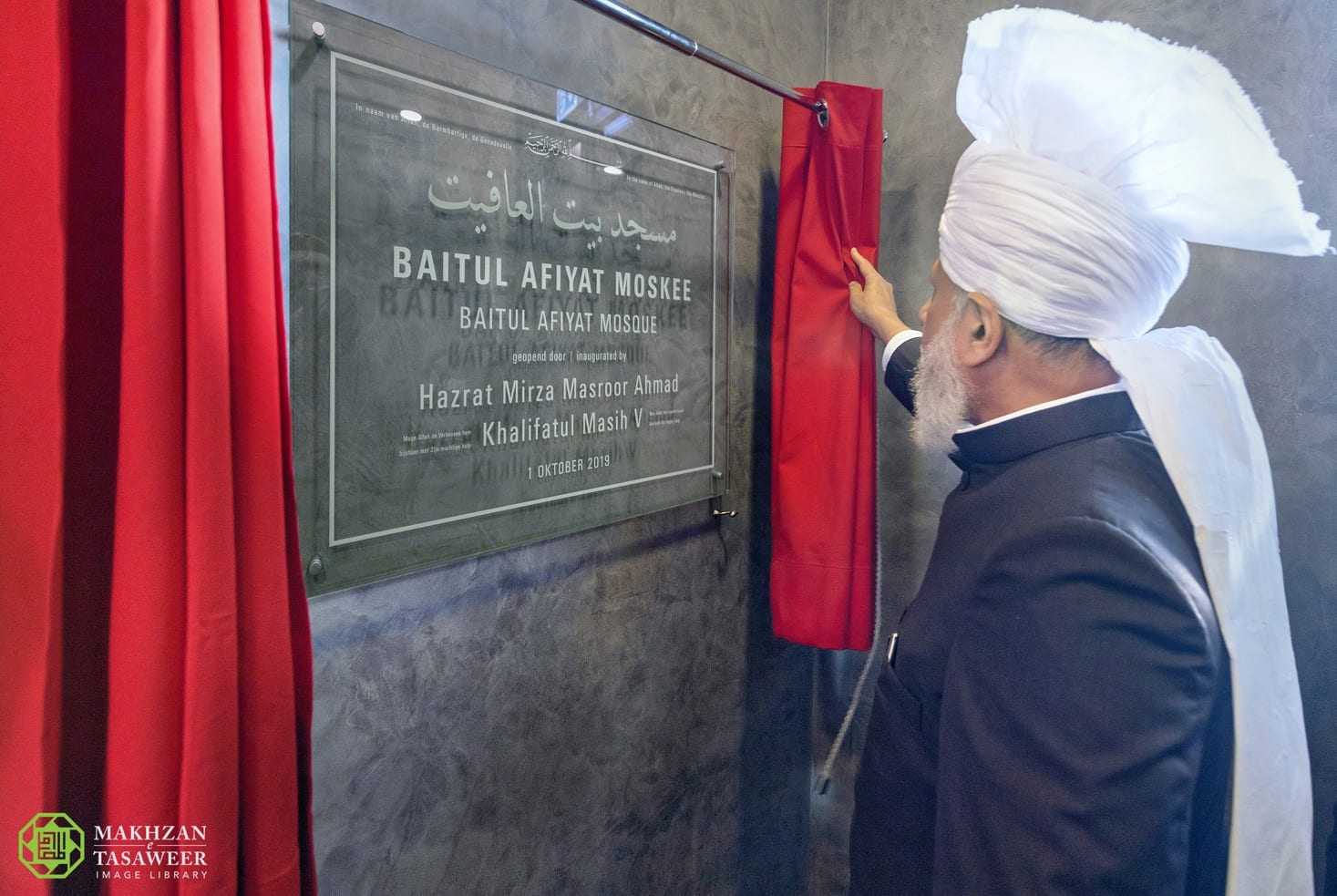 Upon arrival, His Holiness officially inaugurated the Mosque by unveiling a commemorative plaque and offering a silent prayer in thanks to God Almighty.

Later, a special reception, attended by around 80 dignitaries and guests was held to mark the opening of the Mosque.

The highlight of the event was the keynote address delivered by Hazrat Mirza Masroor Ahmad during which he explained the true purposes of Mosques and highlighted the importance of fulfilling the rights of mankind in light of the teachings of Islam. 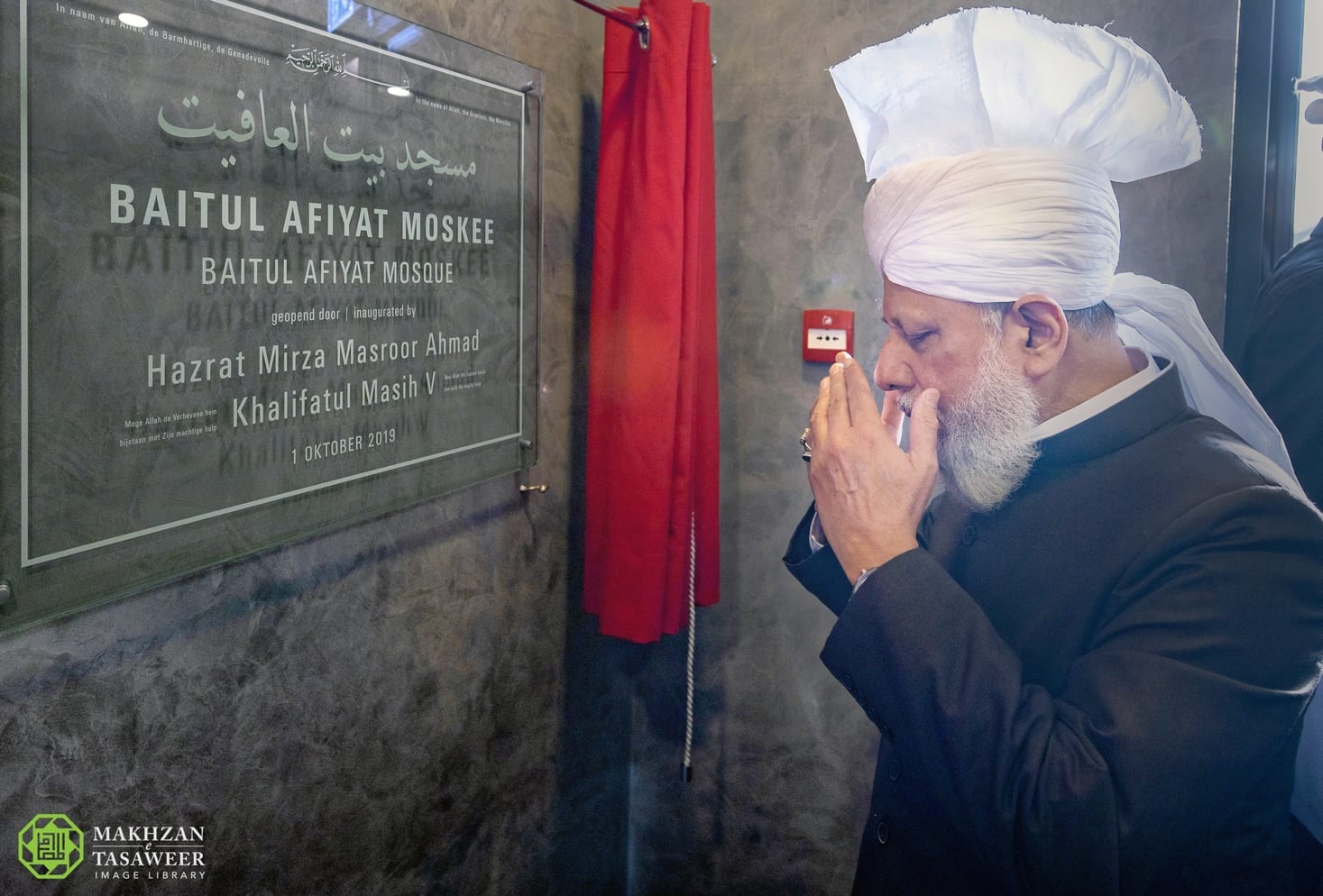 His Holiness started by thanking all the attendees for their openness and commitment to diversity.

“First of all, I would like to thank all of you for accepting our invitation and joining us at the opening of our new Mosque here in Almere. In today’s world, many people living in the Western world harbour suspicions about Islam and Muslims. In fact, it is no exaggeration to suggest that many people fear the religion of Islam and its followers.”

“Hence, the fact that you have accepted our invitation, proves that you are open-hearted people and aspire to forge bonds of friendship between the people of different communities and beliefs. It illustrates your desire for inter-faith dialogue and shows you recognise the importance of upholding human values.” 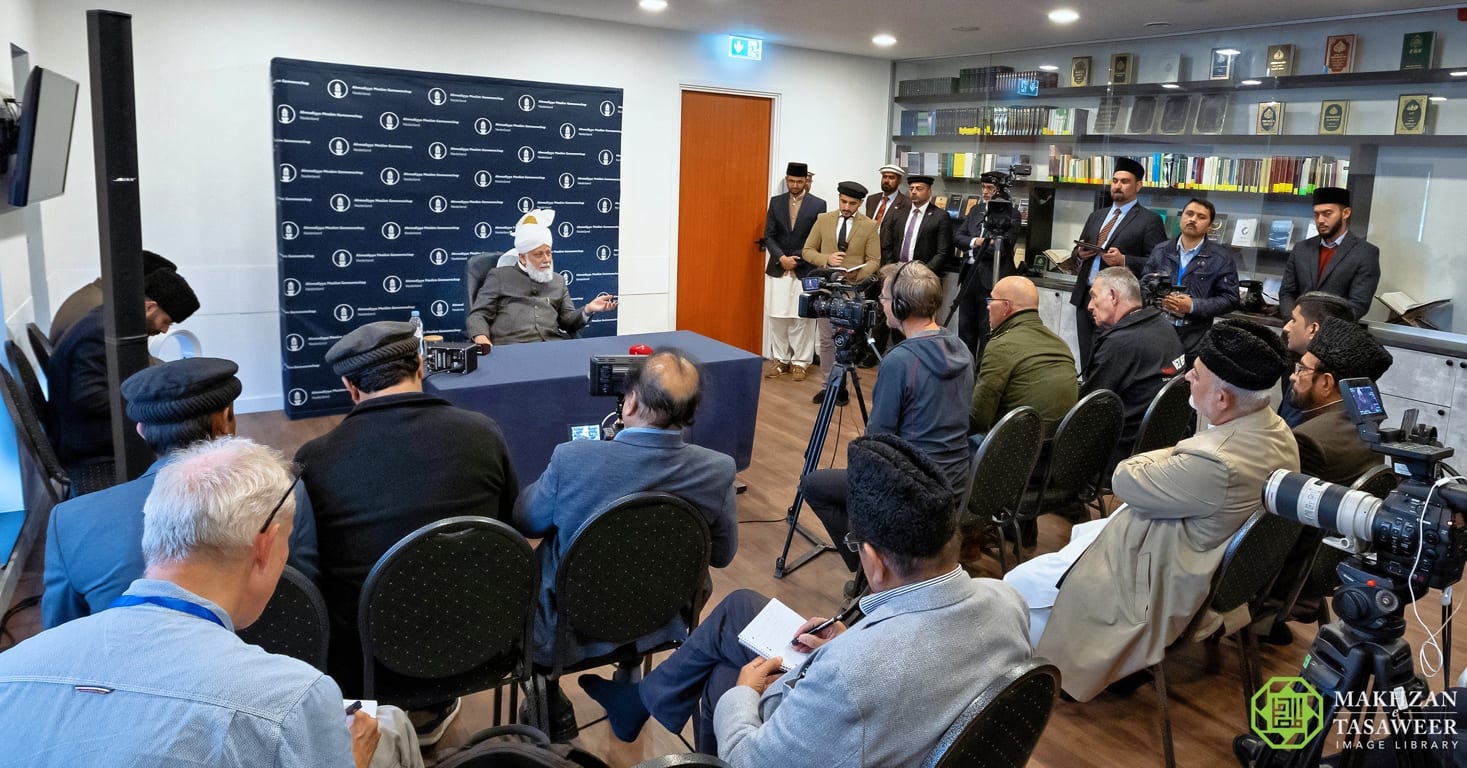 His Holiness also explained that freedom of religionis a key teaching in Islam.

“Our faith teaches us that religion is a matter of the heart and it is for each individual to determine his or her own path, free from any form of coercion. In this regard, the Holy Quran explicitly states that there should be no compulsion in matters of religion.”

His Holiness emphasised on the importance of dispelling stereotypes and misconceptions through dialogue. 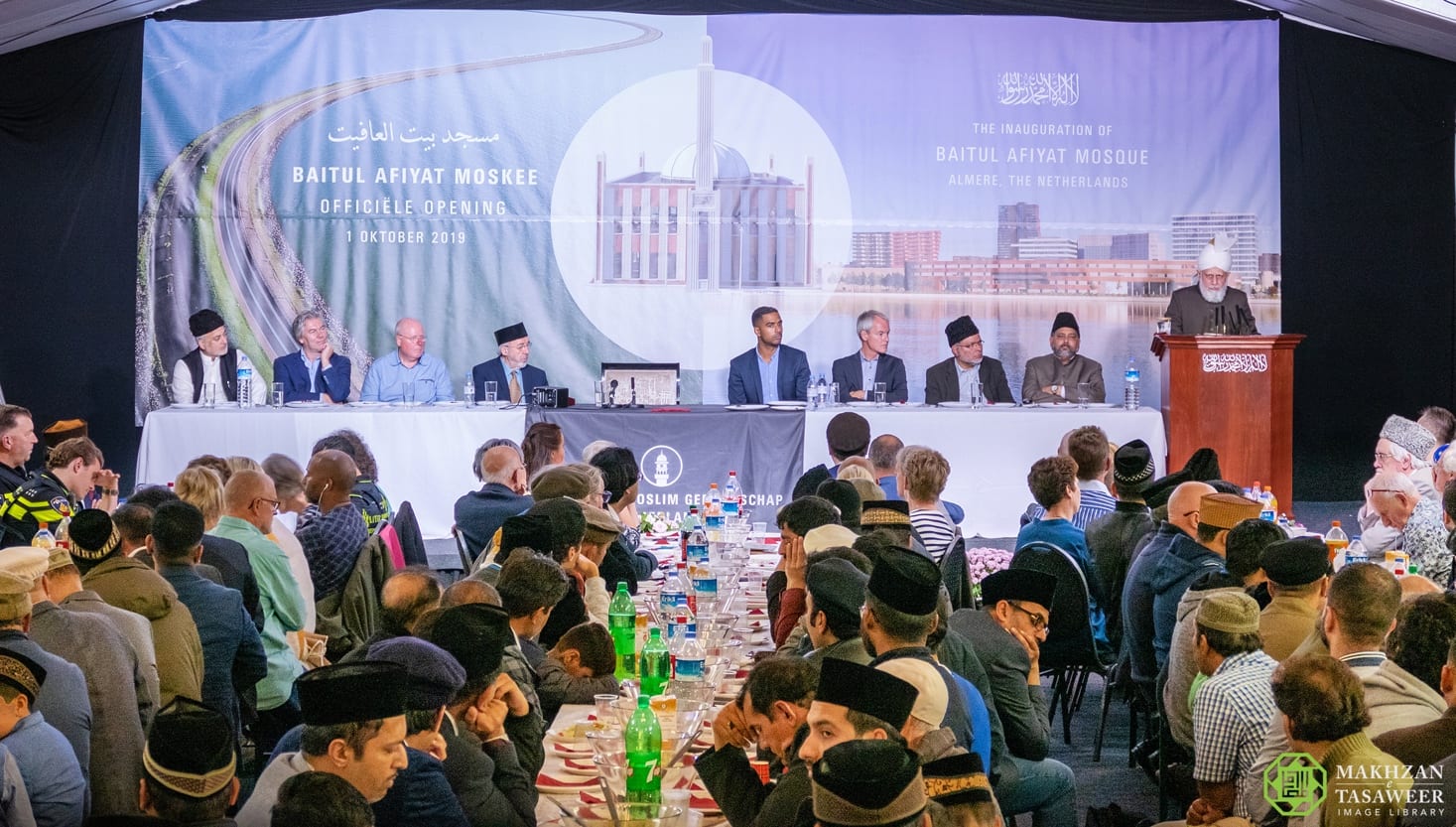 “Taking the time to learn about the faiths and beliefs of others is a crucial way of knocking down the barriers that divide us and exposing those myths that often cultivate unnecessary anxiety and trepidation.”

of the local community.

“Certainly, it is a cause of extreme regret to me, and to all peace-loving Muslims, that in non-Muslim countries, there is widespread fear of Islam and many people believe that Muslims and Mosques are good for nothing apart from causing problems and undermining the peace and security of society.”

“The third pivotal objective for any Mosque is to be a means of introducing non-Muslims to the teachings of Islam and to fulfil the rights of the wider society. Let it be clear that any Mosque which does not serve as a beacon of peace and sympathy for mankind and from where, neither the rights of God Almighty or His Creation are fulfilled, is nothing but a hollow and empty shell.”

Giving the example of a ‘so-called mosque’ mentioned in the Holy Quran, His Holiness explained that it was demolished because ‘it had been built with ill intent and served to

‘ignite the flames of hatred’

‘trigger hostilities between Muslims and other communities’. 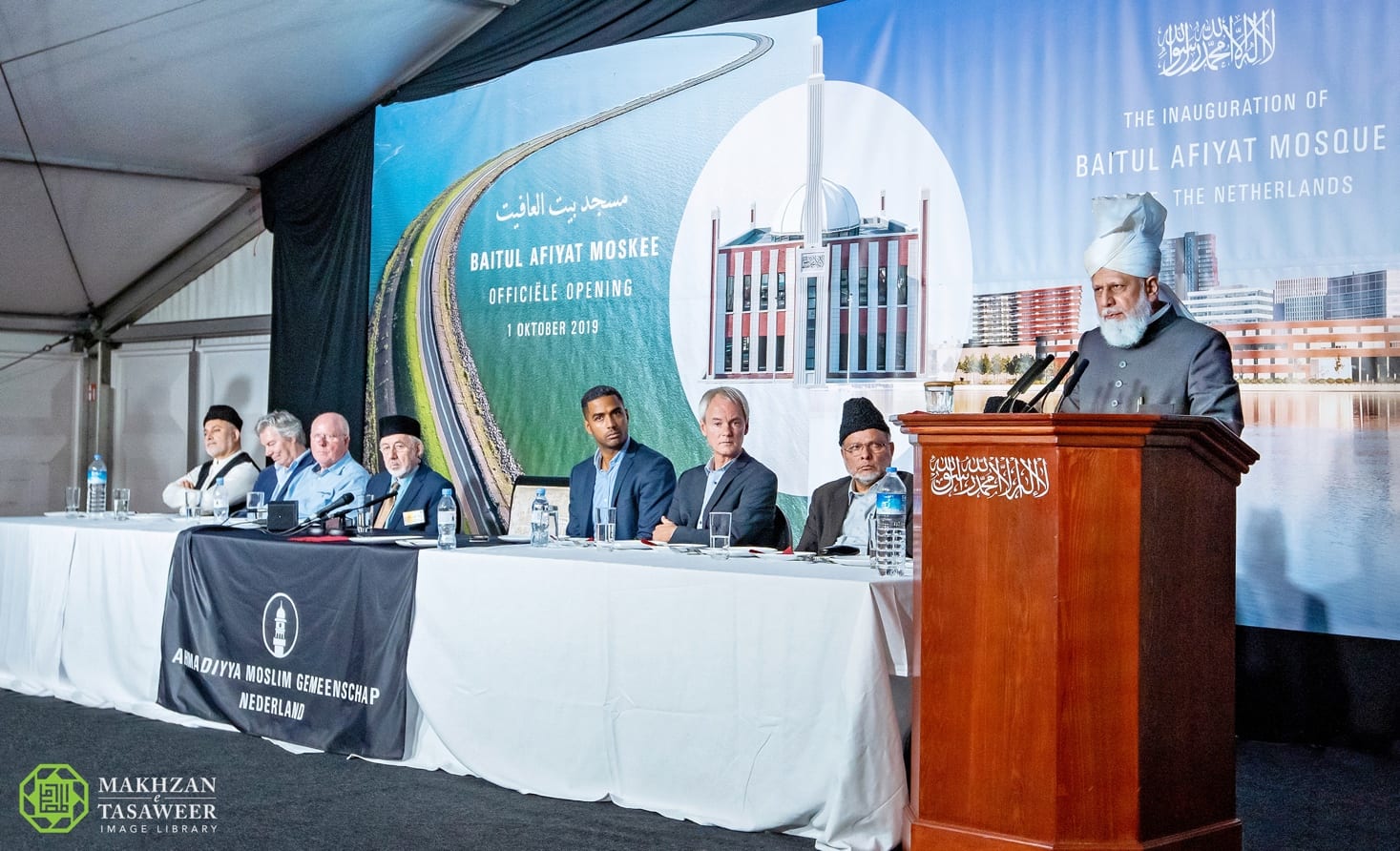 ‘serves as a breeding ground for terrorism or inciting dissent can never fulfil its real purpose or be deemed a true mosque’.

Hazrat Mirza Masroor Ahmad then spoke about how the Ahmadiyya Muslim Community endeavours to help others across the world regardless of creed or colour.

“A Mosque’s purpose can only be fulfilled when the worshippers are infused with a spirit of selflessness, humility and true sympathy and love for all mankind. We also hold regular events and establish schemes to serve our neighbours and the wider society. We devise plans through which we can help the poor and needy and fulfil the rights of orphans and provide aid and assistance to the vulnerable and deprived members of society.” 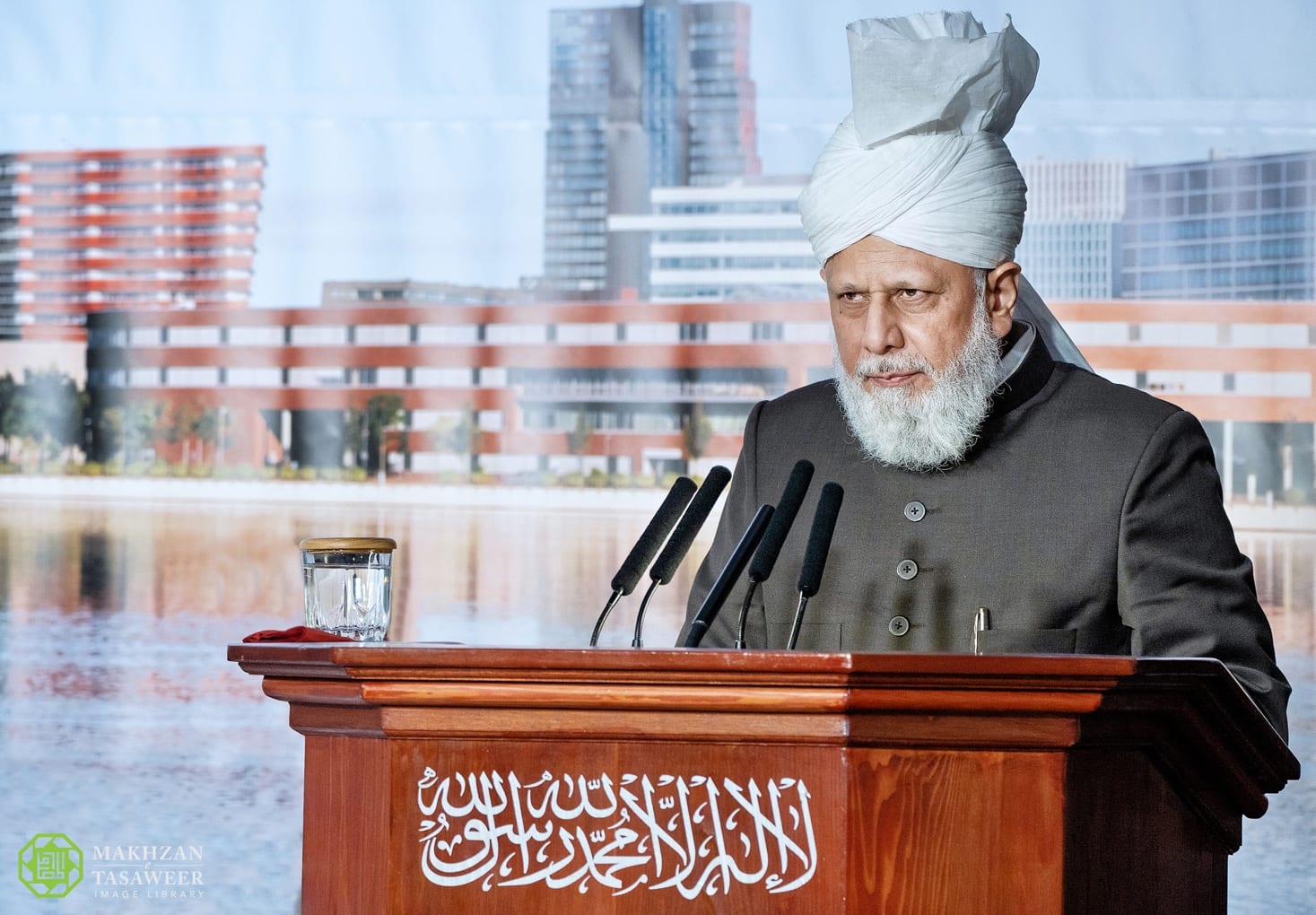 His Holiness said that the Holy Quran made it clear that the worship of people who failed to care for their fellow human beings was worthless.

“If a Muslim, God forbid, causes pain or distress to other people and fails to show compassion, then, even if they are regular in the worship of God, their prayers and supplications are futile and utterly worthless.”

“Allah the Almighty has cursed those who pray to him but fail to fulfil the rights of the weak and needy and He has declared that their prayers will never be accepted. Their worship and entry into a Mosque is nothing but a sham and an empty gesture. The Holy Quran is very clear that their prayers are meaningless and their hypocritical ways will lead only to their humiliation and despair.”

Having spoken about the true teachings of Islam and the real purposes of a Mosque, Hazrat Mirza Masroor Ahmad said:

“When these are the core objectives of true Mosques, there should be no reason for any of you to fear this Mosque. Time and time again, Islam has laid great stress upon caring for one’s neighbours and fulfilling their rights. Muslims are taught to love and protect their neighbours, whether they have personal relations with them or not, and to be ever ready to help them in their times of need.”

“All the people of this city are the neighbours of this Mosque or of people who worship at this Mosque. Regardless of whether our neighbours are Muslims or non-Muslims, it is our religious duty to care for them, to fulfil their rights and to ensure we do not cause any problems or difficulties for them. This is not a favour on our part but our basic religious duty.”

Speaking to the locals of Almere, His Holiness promised that members of the Ahmadiyya Muslim Community will always remain loyal citizens who seek to contribute to the local society.

“Whenever any of you require our help, we pledge to be there to aid and assist, in whatever way we can. I am confident that the local Ahmadi Muslims will take extremely seriously their obligations towards the local society and will always strive to contribute positively to this city and to be faithful and loyal citizens, who care passionately about their local community.”

“I would also take this opportunity to remind the local Ahmadi Muslims that they must always display the highest moral standards and follow the true teachings of Islam and serve their local community.”

Towards the end of his address, Hazrat Mirza Masroor Ahmad said:

“God Willing, I am sure that now this Mosque has opened the relations between our community and the wider public will become ever closer and the ties of friendship between us will continue to strengthen forevermore. I am sure that a spirit of love and mutual affection will continue to grow and you will come to see this Mosque as a symbol of peace and goodwill for all mankind.”

“I pray that this Mosque proves to be an everlasting beacon of light radiating peace, love and humanity in all directions. Ameen.”

“Your Holiness the Caliph of peace and harmony, first of all my warmest greetings and I welcome you to one of the most attractive cities of the Netherlands. Your Holiness I congratulate you for adding this beautiful project in this wonderful city. The Ahmadi Muslims are peace loving, law abiding citizens. Although they are suffering a lot of stresses and strains in most of the Muslim countries but with your motto of love for all and hatred for none you will ultimately be able to remove the harshness and hatred from the world.”

“Love for everyone, hate for no one, Respect thinks that this is a very good attitude, and we congratulate you with the new mosque.”

A representative of the Sikh Community, Sardar Bhupindar Singh said:

“On behalf of the Netherlands Sikh Community I would like to congratulate you all for this holy day, because I have known you people for a very long time. I have a lot of respect for your community, and you are here in Almere Holland, and I have deep respect for His Holiness who has come all the way from England, and I have had the honour to meet him a couple of times.”

“Today we celebrate by welcoming the Ahmadiyya community here in Almere with this new mosque…You can always rely on the local support of the local authorities. We would like to be inspired by your community, today we write history again with the opening of this mosque. So I hope to be enlightened and enriched and most of all I hope to be inspired by you as a community. It was and it is an honour to be with you today at the opening of this new mosque.”

The formal session concluded with a silent prayer led by His Holiness, followed by dinner. 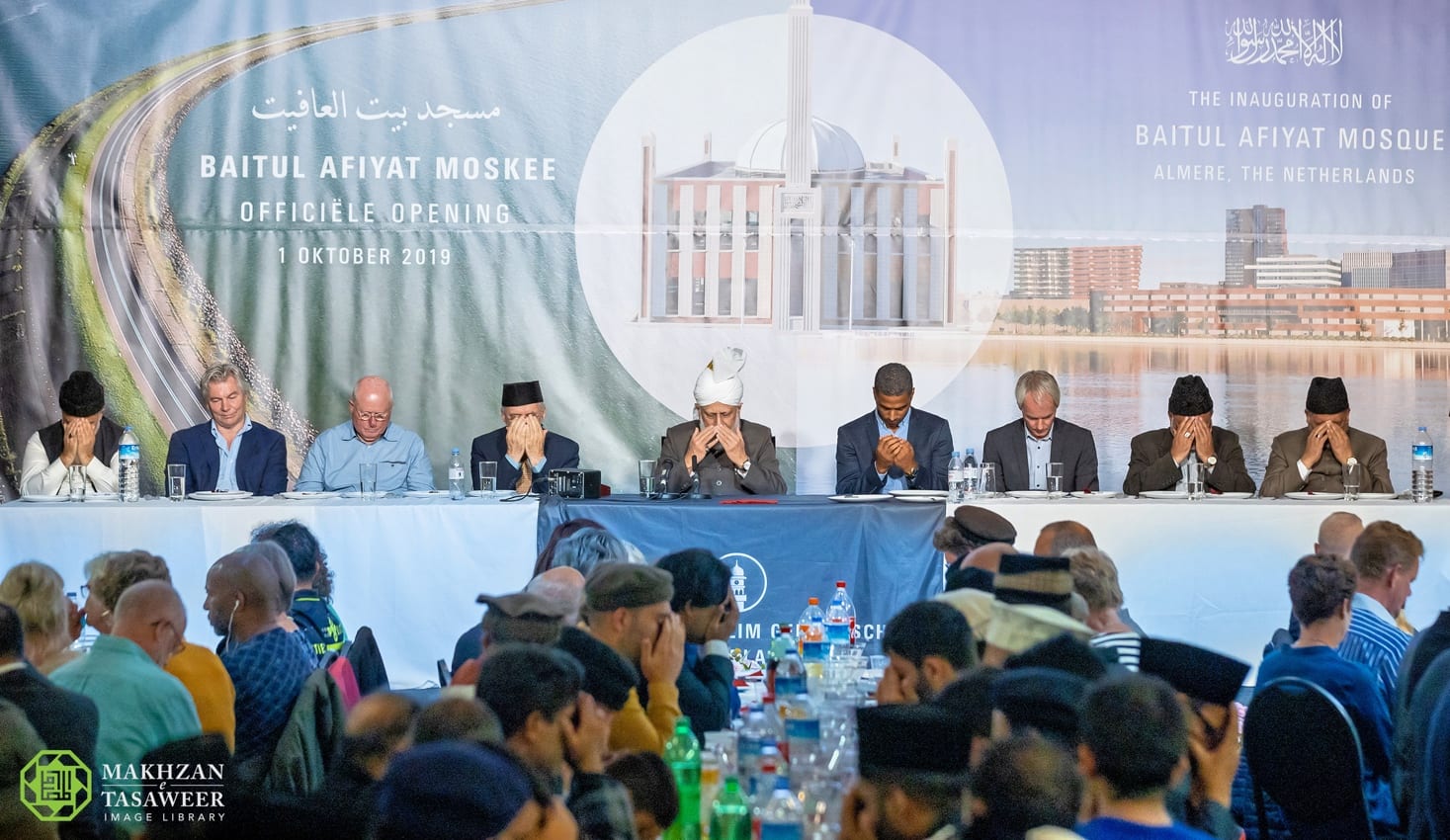 Earlier, His Holiness led the Zuhr and Asr prayers at the Mosque and also fielded questions from various media outlets in a Press Conference. 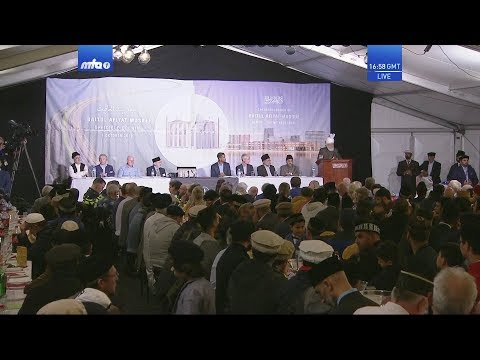 26:31
Address at Inauguration of Baitul Afiyat Mosque in Almere, Holland

A Beacon of Light – Spreading Compassion to All

Address by Worldwide Head of the Ahmadiyya Muslim Community at the Inaugural Reception for the Baitul Afiyat Mosque in Almere, Holland more