The Mosque was opened when His Holiness led the Friday Sermon, which was broadcast globally on MTA International. During his sermon, Hazrat Mirza Masroor Ahmad reminded the worshippers that it was not enough simply to build a Mosque, but that it ought to be filled with sincere worshippers of God Almighty. 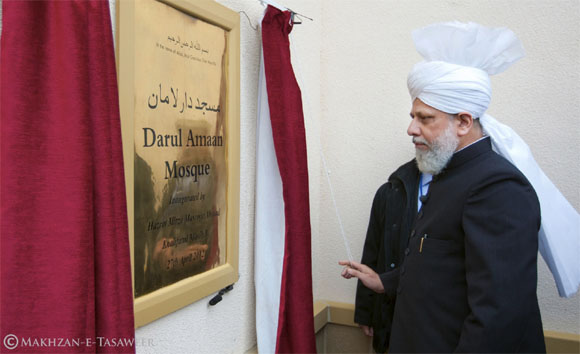 Later in the day, His Holiness held a private meeting with local dignitaries. Thereafter an official reception to mark the opening of the Mosque was held at the Mosque premises, which was attended by dignitaries and guests from various backgrounds.

Councillor Harry Lyons, the Lord Mayor of Manchester, said he was delighted that the Mosque had been situated at a site which was only a few hundred metres from where he had been born and brought up. He said that the Ahmadiyya Muslim Jamaat had the ‘ full support of the Manchester City Council’ .

Tony Lloyd, MP for Manchester Central, said he had a long standing relationship with the Ahmadiyya Muslim Jamaat. He said that under the leadership of Hazrat Mirza Masroor Ahmad, Ahmadi Muslims constantly displayed values of love and peace. 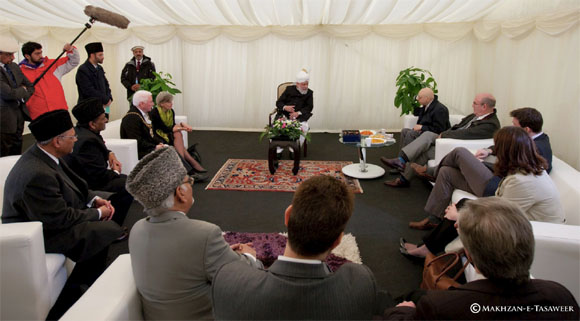 Kate Green, MP for Stretford and Urmston, said the new Mosque was a ‘beautiful’ addition to Manchester and she congratulated the Ahmadiyya Community on the inauguration of Darul Amaan.

Sir Gerald Kaufman, MP for Manchester Gorton, said that though he had been a Member of Parliament for forty-two years, attending the opening of the Darul Amaan Mosque ranked amongst his personal highlights. He concluded by saying that he prayed ‘that God continues to smile upon your Community’.

John Leech, MP for Manchester Withington, said the new Mosque stood as a ‘beacon’ amongst all the other buildings in the area and was a wonderful addition to the landscape. He congratulated the Community for having raised the funds for the Mosque on its own and in such a quick time.

The highlight of the evening was the keynote address given by Hazrat Mirza Masroor Ahmad, in which he outlined the true objectives of a Mosque in Islam. He also used his address to promote inter-faith harmony and integration between people of all backgrounds.

His Holiness said that people generally limited themselves to the company of people of similar interests and backgrounds but that it was essential that people of all backgrounds came together so that a unified society could be built.

“It is a source of great pleasure to me that Ahmadi Muslims do not remain hidden away and isolated, but in fact endeavour to form relations with all segments of society and make efforts to integrate and interact with people from all walks of life. And certainly this ought to be the hallmark of every true Ahmadi Muslim.” 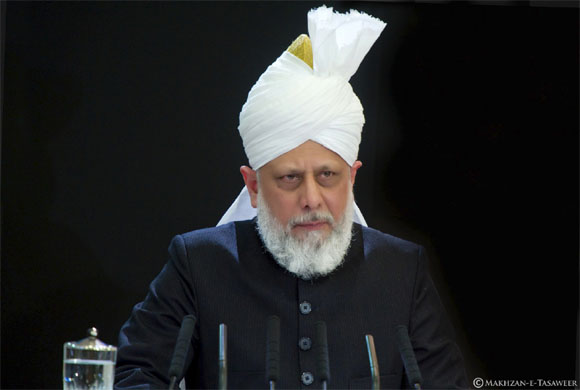 Hazrat Mirza Masroor Ahmad said that in the West the majority of people held a fear of Islam and of Mosques in general. He said that people had no need to fear true Mosques because they were a place to worship God and to encourage all people to serve humanity and to act with justice.

“How can it be, that a person whose life is governed by the teachings of the Holy Qur’an and whose sole aim is to acquire God’s pleasure, that he could ever cause any form of disorder or strife in society? And furthermore, how can it be that in a Mosque a Muslim learns to usurp the rights of other people? This could never happen because it directly contravenes the teachings of Islam.”

His Holiness used his address to reassure all those in attendance that Ahmadi Mosques were true Mosques and thus were a place of safety and peace. His Holiness said:

“It is with complete conviction and confidence that I say to all of you that the only message that that you will ever hear from an Ahmadi Mosque is a call urging people towards God Almighty, and a call to fulfil the rights of God’s Creation.”

His Holiness concluded by stating that the name of the Mosque he was inaugurating actually meant a ‘place of peace and security’ and thus it would be a means of protection not just for those who enter it but those who surround it.

“Certainly, the local people of this area will find that all Ahmadis will always remain at the forefront of every effort that is made towards transforming hatred and enmity into love and peace. Thus I hope and very much expect that this mosque will become a symbol of peace and a beacon of light not just in the local area but for the entire city and indeed the wider world.”