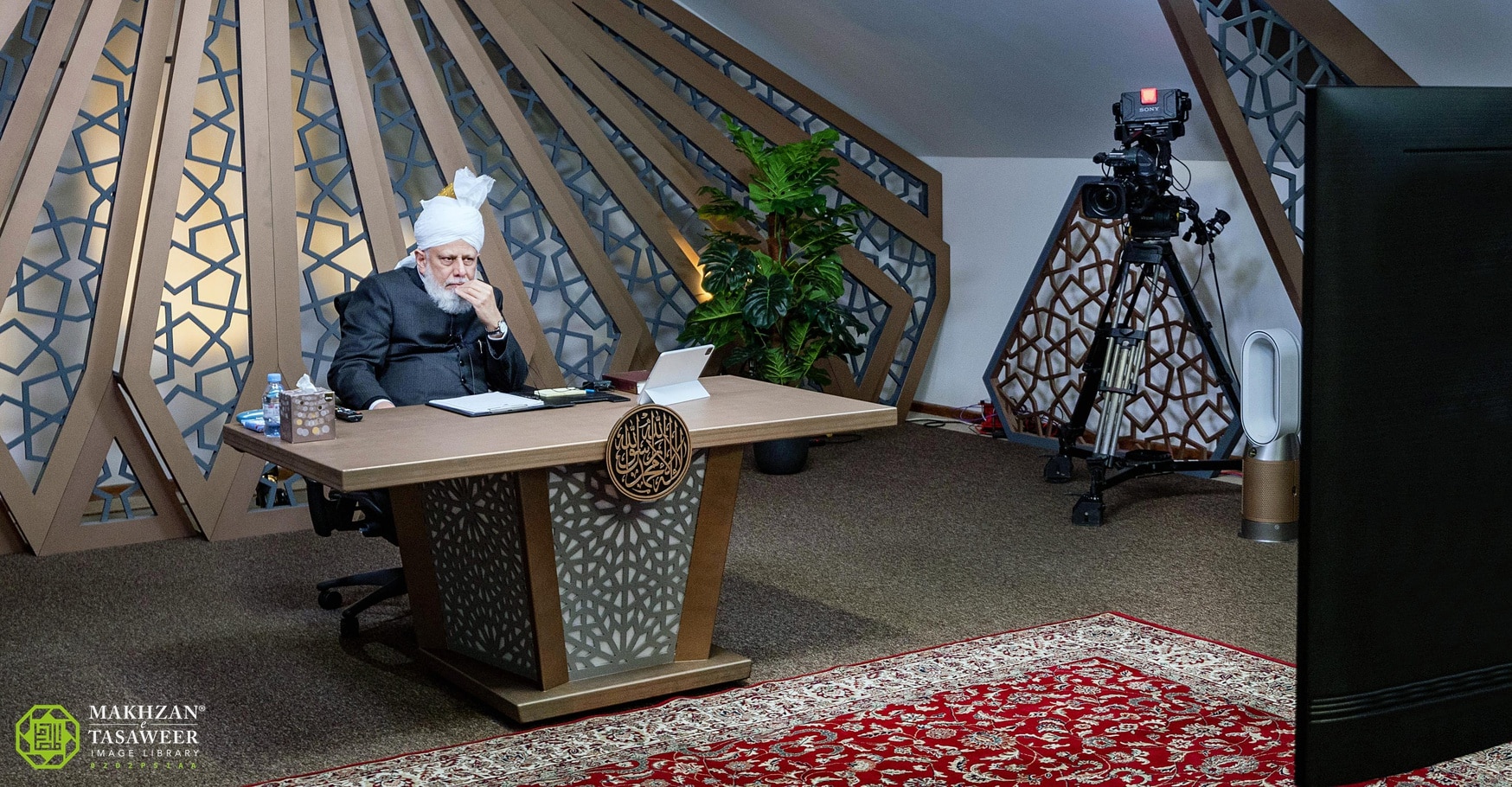 His Holiness presided the meeting from MTA Studios in Islamabad, Tilford, whilst the Lajna members joined the meeting virtually from Qadian.

Following a formal session which began with the recitation of the Holy Quran, members of Lajna Imaillah had the opportunity to ask His Holiness a range of questions regarding their faith and contemporary issues.

One of the girls in attendance asked His Holiness what they should do if any Indian state laws or institutions seek to ban them from observing the Islamic Hijab during their studies.

His Holiness said that they should not be prevented from observing Hijab but if they were, Ahmadi Muslim women and girls should take legal action to uphold their rights to freedom of religion and education. 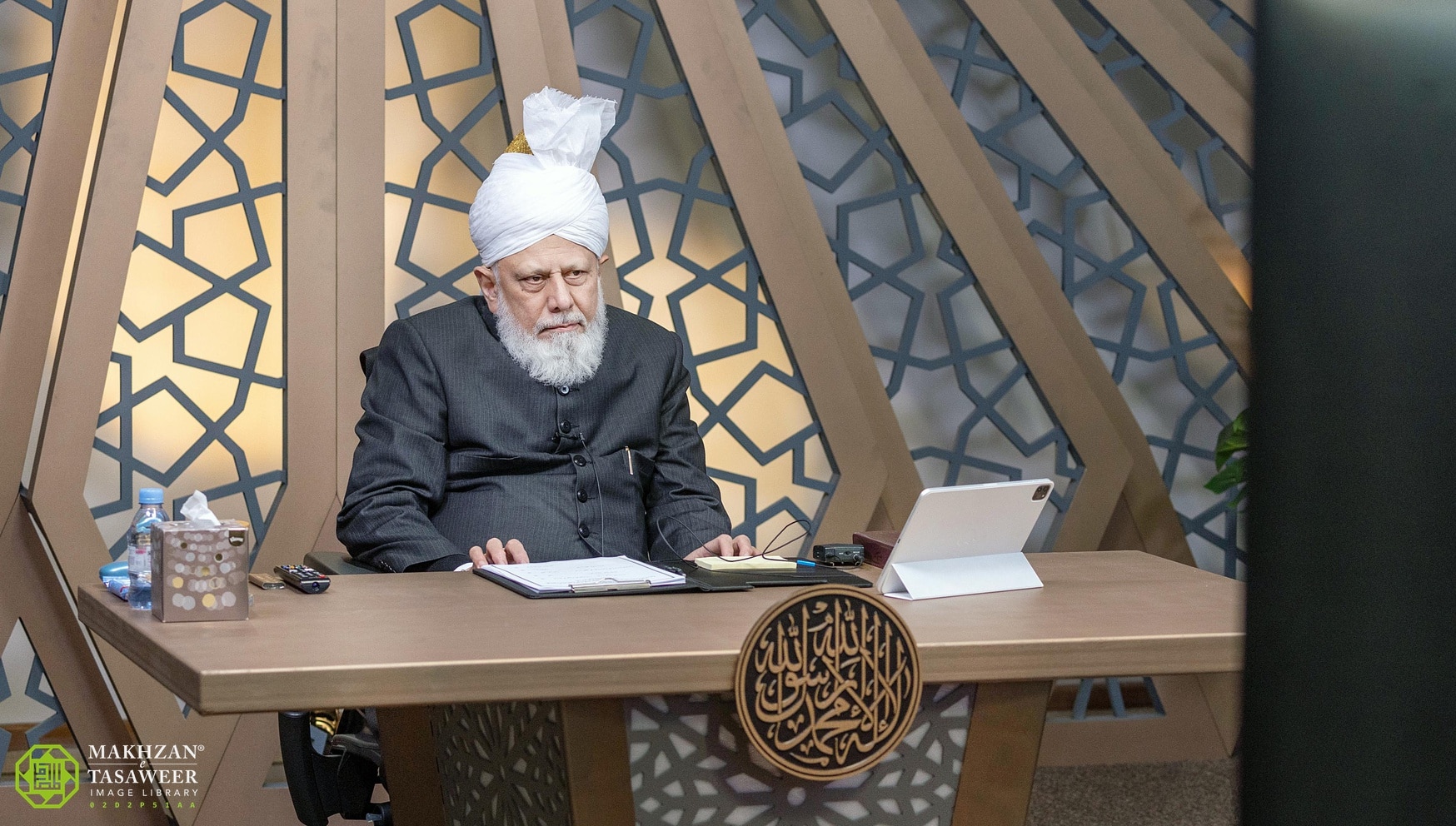 “You should fight a legal case for your case to observe the Hijab. You should raise the point that they are discriminating against you and seeking to take away your religious rights. If you do not respond then they will stop other people of other faith as well, including Sikhs from wearing their turban. You should raise your voice against this injustice. The Ahmadiyya Muslim Students Association should write articles in the newspapers and if there are individual cases of injustice the individuals should launch a legal fight against it. In terms of Hijab, you must decide whether you wish to prioritise your faith over the world. You must decide whether you prefer to expose yourselves to the world or follow the injunction of the Holy Prophet Muhammad (peace and blessings be upon him) in which he has said that ‘modesty is part of the faith.’ This is a decision you must make for yourself… At a minimum you should wear a scarf and if they do not permit you to do so when taking your exams, then set your exams aside and launch a legal fight for your rights.”

Another attendee asked His Holiness why there is so much suffering in the world and why God does not stop suffering.

“The law of nature created by Allah the Almighty is in effect in this world. Allah the Almighty has not said anywhere that when one acts against the laws of nature there will not be any negative reaction. When wars take place and bombs explode, innocent children also die as a result… It is the actions of human beings that cause the war and the death of innocent people.”

His Holiness said that even in wars fought against the Muslims and the Holy Prophet Muhammad (peace and blessings be upon him), innocent Muslims suffered despite the fact that they were promised victory.

Speaking about why children are born with diseases and disabilities, His Holiness said that at times it is the result of certain actions of the parents which results in the children being born with an illness, so even that is a result of the law of nature which is governing the world.

However, His Holiness said that as Muslims, our belief is not restricted to the events in this life, rather those who suffer in this world will be recompensed in the Hereafter.

His Holiness advised her to read both books of the Second Caliph of the Ahmadiyya Muslim Community in relation to this subject which makes the matter clearer: Ten Proofs of the Existence of God and the Urdu book, Hasti Bari Ta’ala.

A Lajna member asked His Holiness what an Ahmadi Muslim should do when forced to choose between her faith and the laws of the country.

“The laws of a country that do not clash with the clear injunctions of the Shariah, we must follow them. However, if the laws of a country prevent us from following the commandments of the Shariah, like it is the case in Pakistan, where Ahmadi Muslims are stopped from believing in the Muslim declaration of faith [Shahada], in those circumstances we say that we will abide by every law of the country except those that directly stop us from acting upon our faith. So, whatever the law says we can never disassociate ourselves from the Shahada. Similarly, in Pakistan, the law bars us from praying five times a day and offering the Islamic greeting of ‘peace’ or using any Islamic terminology. However, in this situation, we consider it our religious right and so we act upon our faith. Otherwise, we follow all other laws of the land and are loyal to the country. We even sacrifice our lives for the security and peace of the country and as Ahmadi Muslims we do this in every country where we live whereby we are law-abiding peaceful citizens.”