Head of Ahmadiyya Muslim Jamaat says that anger of Muslims is fully justified, but violent reaction must be condemned 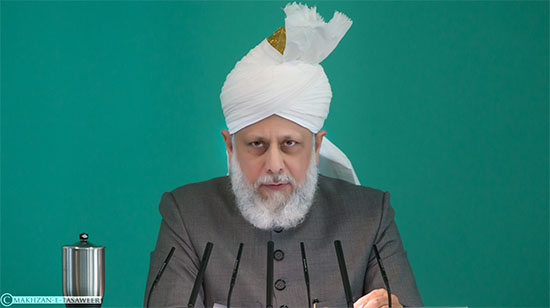 The World Head of the Ahmadiyya Muslim Jamaat, Hazrat Mirza Masroor Ahmad, the Fifth Khalifa, has called on Muslims across the world to peacefully unite in their opposition to the film ‘The Innocence of Muslims’ which has stirred up great resentment and anger amongst Muslims worldwide. He has also called for limits to free speech so that the religious sentiments of all people are protected.

During his weekly Friday Sermon, delivered from the Baitul Futuh Mosque in South-West London on 21 September 2012, Hazrat Mirza Masroor Ahmad said that Muslims across the world had been aggrieved and hurt by the film and also by the decision of a well-known French magazine to once again print vile caricatures depicting the Holy Prophet Muhammad (peace be upon him).

During his sermon, Hazrat Mirza Masroor Ahmad said it was an inherent fear of Islam that was the main motivation behind the anti-Islam video and other similar attacks on the religion. He said:

“It is their inability to defeat Islam that is causing its opponents to resort to such vile acts which they try to justify on the basis of freedom of speech or expression.”

Hazrat Mirza Masroor Ahmad was clear in his condemnation of the violent response witnessed in a number of countries by extremist Muslims. He said that the killings of innocent people including ambassadors and diplomats was completely contrary to the teachings of Islam; he said that damaging property or burning buildings was completely wrong and benefited no party, except those who wished to defame Islam.

Addressing the issue of freedom of speech, Hazrat Mirza Masroor Ahmad said that people should never be too proud to admit that there may be flaws in certain man-made laws or regulations. To treat freedom of speech as paramount at the expense of world peace and harmony was a flawed concept.

Speaking about the need to prioritise certain rights over others, Hazrat Mirza Masroor Ahmad said:

“Let it not be that in the name of freedom of speech the peace of the entire world be destroyed.”

Hazrat Mirza Masroor Ahmad also called on the leaders of the world and members of the public to reflect whether they were playing a role in causing hostilities to rise in the world by supporting, at all costs, the right of people to make films or caricatures that offend religious sentiments and hurt innocent people.

In reaction to such provocations, Hazrat Mirza Masroor Ahmad called on Muslims worldwide to display a collective and mature response. He said Muslim Governments and Muslims who live in Western countries should join together to promote the real and peaceful teachings of Islam and of the Holy Qur’an to the world. He said they should take a peaceful and united stand to defend Islam and the noble character of the Holy Prophet Muhammad (peace be upon him) at every opportunity and at every level.

“Muslims need to remember that extremism is not the answer to such provocation. Instead the answer is to reform oneself and to respond to the curses of the opponents by sending salutations on the Holy Prophet (peace be upon him). And in worldly terms the Muslim world needs to unite and Muslims who live in western countries should fully utilise the power of their right to vote.”

His Holiness noted that in recent years such attacks on Islam were increasing and whilst the inappropriate reactions of certain Muslims had to be condemned, he said it should not be forgotten that it was often others were taking the first step in causing such disorder.

Addressing the efforts of the Ahmadiyya Muslim Jamaat to portray the true teachings of Islam to the world, Hazrat Mirza Masroor Ahmad said:

“We Ahmadi Muslims leave no stone unturned when it comes to serving humanity. For example last year, in response to a pressing need, we raised around 12,000 bottles of blood for the people of America and we are doing a similar blood drive once again currently. Thus we are giving blood in an effort to save lives, but by supporting the acts of vile and hateful people, others are making our hearts bleed with grief.”

The Khalifa concluded by speaking about how all attempts to undermine or mock the Holy Prophet Muhammad (peace be upon him) were destined to fail. He said:

“It should be remembered that the Founder of the Ahmadiyya Muslim Jamaat, the Promised Messiah, said that every victory comes from the heavens and that the heavens have decreed that the Prophet who the world is trying to insult will ultimately be granted a great victory in this world. And this victory will be achieved by winning the hearts of people.”

In response to a question about the violent protests following the release of the film, Hazrat Mirza Masroor Ahmad said that such protests were wrong and that the killing of any innocent people, including ambassadors and diplomats was completely contrary to the teachings of Islam. He said that all protests must be conducted within the scope of the law and remain peaceful.

“It is through the Promised Messiah (peace be upon him) that the world is destined to unite under the banner of the Holy Prophet Muhammad (peace and blessings be upon him).” – Hazrat Mirza Masroor Ahmad more