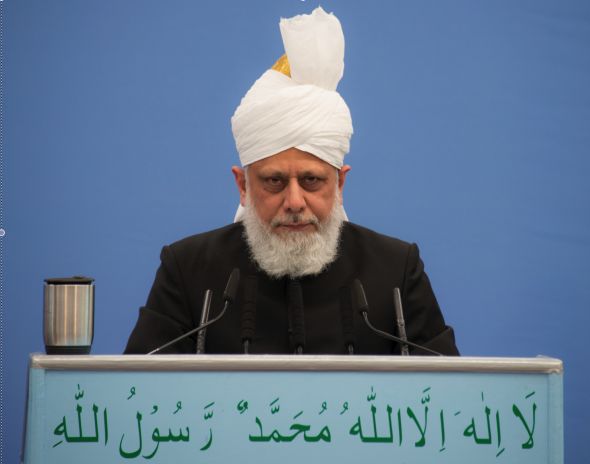 Hazrat Mirza Masroor Ahmad (may Allah be his Helper) delivering the Friday Sermon from Frankfurt, Germany

On 6 June 2014, the World Head of the Ahmadiyya Muslim Community, the Fifth Khalifa, His Holiness, Hazrat Mirza Masroor Ahmad delivered his weekly Friday Sermon from the Kalbach Sports and Recreation Centre in Frankfurt. Almost 5,000 Ahmadi Muslims attended the sermon, which was televised live across the world on MTA International.

During his hour-long address, His Holiness addressed the differences between the Institution of Khilafat (Caliphate) and secular or other forms of leadership.

His Holiness categorically rejected the accusation that Khilafat could be considered similar to a dictatorship. He said that whilst worldly interests and a desire for power consumed dictators, the Khalifa of the Time had entirely spiritual objectives.

“Whilst worldly leaders have secular goals, the purpose of Khilafat is to draw the attention of all people towards fulfilling each others rights. It is to instil a spirit amongst Ahmadi Muslims of giving precedence to their faith over all worldly matters and Khilafat makes every effort to peacefully establish the Unity of God in the world.”

“Let me make it clear to every Ahmadi Muslim, every youth and every person that Khilafat and dictatorship have no link whatsoever… There is no compulsion in religion and so when a person willingly and entirely of his own volition accepts Ahmadiyyat then for the sake of the religion it is necessary to fulfil that pledge.”

Speaking of the unique relationship between the Khalifa and Ahmadi Muslims, Hazrat Mirza Masroor Ahmad said:

Speaking of his own love and connection with the members of the Ahmadiyya Muslim Community across the world, Hazrat Mirza Masroor Ahmad said:

“Before sleeping at night there is no country of the world that I do not visit in my imagination and no Ahmadi for whom I do not pray whilst sleeping and whilst awake. I am not doing any favour because this is my duty and may Allah enable me to ever increase in assuming my responsibilities. The only reason I have said this is to make it clear that there can be no comparison between Khilafat and other worldly or secular leaders.”

His Holiness said the Quran emphatically enshrined principles of religious freedom stating “There should be no compulsion in religion” and so every person had a fundamental right to choose their faith or belief.

During his sermon, His Holiness also responded to a question of a non-Ahmadi German who had seen a quote given by the Second Khalifa suggesting that ‘victory’ in Germany would lead to a victory in Europe.

“Generally speaking the German people are intelligent and wise and so they understand that the missionary and humanitarian works of the Ahmadiyya Muslim Community are all conducted so that people become aware of the true and entirely peaceful teachings of Islam.

Let it be clear that the word ‘victory’ does not in any shape or form mean that we, God forbid, intend to use force or to take over any government. First and foremost we declare that there is no compulsion in matters of faith and that religion or belief is a matter of a person’s heart. Our success will never be based on force but instead will be achieved by winning people’s hearts and minds by highlighting Islam’s true teachings.”