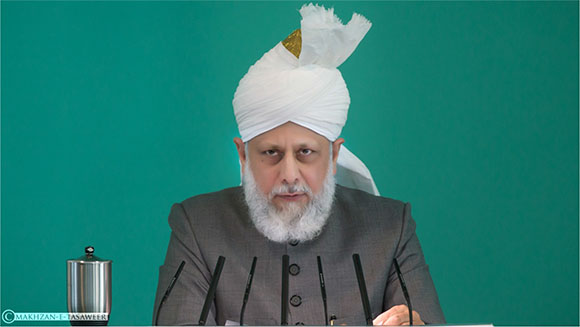 The World Head and Fifth Khalifa of the Ahmadiyya Muslim Jamaat, Hazrat Mirza Masroor Ahmad, has called on all Ahmadi Muslims to pray for the plight of the Muslim world. His Holiness said the majority of the Muslim world was riven with conflict and stood on the brink of disaster.

Hazrat Mirza Masroor Ahmad made the comments whilst delivering his weekly Friday Sermon at the Baitul Futuh Mosque in South West London on 1 February 2013.

Hazrat Khalifa-tul Masih Vatba used his address to highlight the precarious and desperate situation of the Muslim world. He said that even though Ahmadi Muslims were persecuted by Muslim extremists, it remained the duty of Ahmadi Muslims to pray for the entire Muslim Ummah that they are rightly guided towards the true and peaceful teachings of Islam.

“The majority of our opponents only oppose us due to a lack of knowledge and their fear of the extremist clerics. Nevertheless, because they associate themselves to our master the Holy Prophet Muhammadsaw we must pray for them.”

“The majority of Muslim countries are facing grave difficulties due to increasing conflict and division; in fact they are stood on the brink of complete destruction. Their leaders and politicians neither act with justice, nor with the fear of God in their hearts, whilst some members of the public are expressing love for their nations in a harmful way. May Allah grant both the Muslim leaders and the people of those nations the ability to act with justice. If they fail to do so then whatever little freedoms the Muslim countries currently enjoy will come to an end and they might be completely suppressed.”

Speaking about his previous Friday Sermon, Hazrat Mirza Masroor Ahmad said he had predicted that extremist clerics in Pakistan would hold rallies on the pretext of commemorating the date of birth of the Holy Prophet Muhammadsaw and would use the occasions as an excuse to abuse and vilify the Founder of the Ahmadiyya Muslim Jamaat. The Khalifa said it later emerged that events had transpired just as he had predicted.

“Rallies and gatherings were held in the streets of Rabwah by extremist clerics in which they hurled insults and profanities towards the Ahmadiyya Muslim Jamaat. The extremist opponents of our Jamaat have absolute freedom to say whatever they like, whilst we Ahmadi Muslims do not even have the right to use the name of Allah and His Messengersaw. May Allah have mercy on the Pakistani nation so that it can be freed from the influence of these so called clerics.”

Hazrat Mirza Masroor Ahmad said that all efforts to destroy the Ahmadiyya Muslim Jamaat were destined to fail:

“The extremist clerics will continue to insult us and place obstacles in our path in an effort to derail us. Let it be clear that all such efforts will always be frustrated, in fact all of the opposition we face will be a means of progress for our Community.”

For much of his address, Hazrat Mirza Masroor Ahmad talked about the grand status of the Holy Prophet Muhammadsaw as explained in the writings of the Founder of the Ahmadiyya Jamaat, Hazrat Mirza Ghulam Ahmadas of Qadian.

Hazrat Mirza Masroor Ahmad presented a passage from the book Braheen Ahmadiyya, in which the Promised Messiah called the Holy Prophetsaw the greatest ever teacher (Murrabi Azim) who was sent for the reformation of the world.

Hazrat Mirza Masroor Ahmad concluded his address by condemning all groups and organisations that were defaming Islam.

“There are many organisations whose wrong acts defame Allah, His Prophet and the religion of Islam. We, the Ahmadiyya Muslim Jamaat, continuously work towards portraying the real and pure teachings of Islam but in direct opposition to us  are such groups who are intent on staining Islam’s pure name. Their acts are being exploited by the opponents of Islam. May Allah grant the Muslim world and indeed the wider world freedom from such extremist elements.”