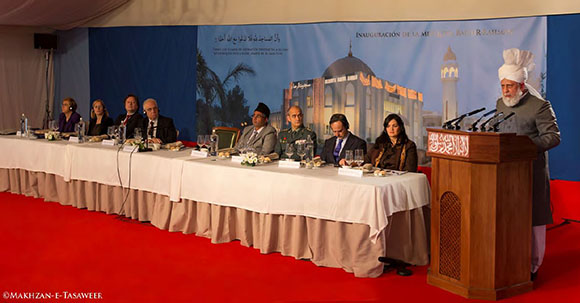 On 3 April 2013, the Worldwide Head of the Ahmadiyya Muslim Jamaat and Fifth Khalifa, Hazrat Mirza Masroor Ahmad, addressed a Special Reception held to celebrate the recent opening of the Baitur Rahman Mosque in Valencia. 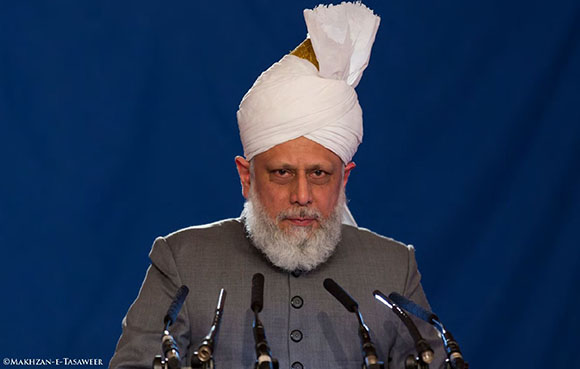 The Khalifa of the Promised Messiah said that he wished to reassure the Spanish people that the new Mosque would be a source of peace and compassion. He said the Mosque would foster a spirit of togetherness and unity within the society.

“We, Ahmadi Muslims, are not here to cause you any disturbance but rather we are here to serve, we are here to share with you the community, to join you in your activities, and live peacefully and happily with you.”

During his address, Hazrat Mirza Masroor Ahmad, repeated the motto of the Ahmadiyya Muslim Jamaat of ‘Love for All, Hatred for None’ which was first coined by the Third Khalifa of the Promised Messiah, Hazrat Mirza Nasir Ahmad during a visit to Spain in 1980. 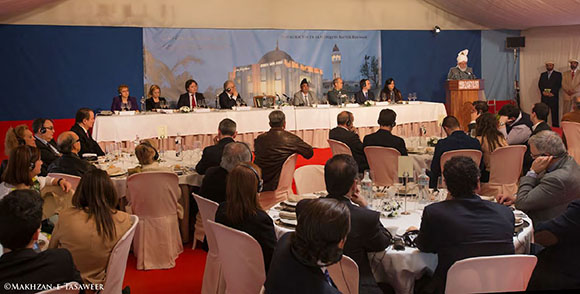 “Today the Ahmadiyya Muslim Community is established in more than 200 countries and everywhere we go we spread the message of ‘Love for All, Hatred for None’.”

The Khalifa of the Promised Messiah said that due to the extremist acts of a tiny minority of ‘so-called Muslims’ the image of Islam had been unfairly tarnished in the West. He said extremism and terrorism had nothing to do with Islam. The truth was that never once did the Holy Prophet Muhammadsaw or his Rightly Guided Successors ever initiate any wars or acts of aggression. When permission was granted by Allah to fight it was given as a means to protect all people and all religions.

“The Holy Qur’an states that permission to fight back was given because otherwise no place of worship, be it a Church, a Synagogue, a Mosque or Temple would remain safe from the aggressors.”

“This Mosque has been built to serve as a place of brotherliness and unity. Whoever comes here with pious intentions, be it a Muslim or a non-Muslim, will have the doors of the Mosque always open for him or her. This Mosque has been named Masjid Baitur Rahman – that is a House of God, who is Ever Gracious and who shows kindness to His Creation without any conditions. We, who have built this Mosque, will ensure that we continue to serve and help the communities we live in and to serve God’s Creation.”

Dozens of guests attended the reception, including a range of politicians and dignitaries, some of whom also addressed the audience.

The Lady Mayor of Pobla de Vallbona, the town where the new Mosque is located, said she was delighted to welcome so many guests to her town. She praised the Ahmadiyya Muslim Community for “always promoting peace and tolerance in the world”.

Jose Maria Alonso MP, said he had been greatly impressed when meeting Hazrat Mirza Masroor Ahmad a few months earlier at the European Parliament and when listening to his address in Brussels. The MP said it was imperative that inter-faith relations between Muslims and Christians continued to develop.

Luis Santamaria, Head Representative of Spanish Government in Valencia, also spoke of the need for inter-faith dialogue. He said that Hazrat Mirza Masroor Ahmad had always promoted Islam’s message of peace. He added that “all people of goodwill were welcome in Spain”.

Juan Cotino, President of Valencia’s Regional Parliament, called the new Mosque a “truly beautiful building” and said the event itself was a “symbol of goodness” as people of different faiths and beliefs were joined together.

Prior to the event, Hazrat Mirza Masroor Ahmad met with various dignitaries, whilst immediately after the reception, he met personally with all of the guests. 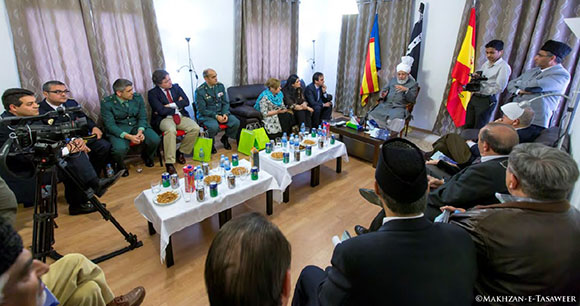