Q1 4:58 When did Hazrat Masih Maud(as) got the first revelation from Allah that he is the Promised Messiah?

Q2 9:57 What exactly did Hazrat Mirza Ghulam Ahmad Qadiani(as) claim to be?

Q3 20:52 Ahmadiyya Jamaat believes that God can send prophets after Hazrat Muhammad(sa) but the religion will still be the same. Were there any prophets before Hazrat Masih Maud(as) and will there be any more prophets later?

Q4 26:16 Even if Hazrat Masih Maud(as) is the Mujaddid for 14th century, how does it prove that he is a prophet of God?

Q5 30:07 Why did not Hazrat Masih Maud(as) announce all his claims (to be Masih, Mahdi, Mujaddid and Prophet) at the same time?

Q6 34:10 Did any other prophet also claim multiple positions one after the other?

Q7 37:30 Hazrat Masih Maud(as) said that prophets die natural death but Hazrat Khalifatul Masih IV(rh) said Hazrat Yahya (as) was martyred. Why is there this discrepancy between the two?

Q10 55:09 How was Brahin e Ahmadiyya a revolutionary book?

Q11 1:02:40 Were Krishna and Buddha prophets of God? Did God send prophets to regions other than the Arab world?

Q12 1:05:30 Hazrat Masih Maud(as) said in Brahin e Ahmadiyya that he is Zulqarnain. What does that mean?

Q13 1:08:30 What steps is Jamaat Ahmadiyya Germany taking to spread the word of Islam?

Q15 1:22:08 If Mirza Ghulam Ahmad Qadiani(as) is the Promised Messiah, then why don’t other Muslims scholars believe in him? 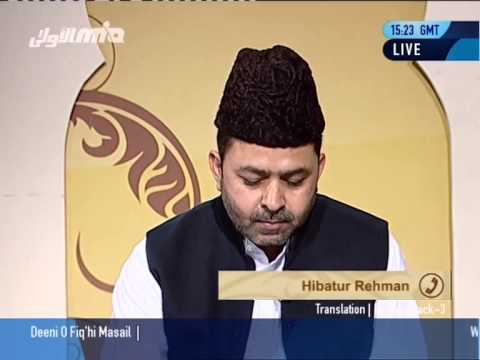