A Symbol of Peace and Tolerance

On 15th October 2011, Hazrat Mirza Masroor Ahmad(aba) laid the foundation stone of the Baitul Mujeeb Mosque in Brussels. Once constructed, this will be the first mosque of the Ahmadiyya Muslim Community in Belgium. A reception was arranged in which dignitaries, professionals and local residents were invited. Some of the notable guests who attended the function and who also delivered brief remarks, included:

The transcript of the keynote address of the evening delivered by Hazrat Mirza Masroor Ahmad, Khalifatul Masih V(aba), Head of the worldwide Ahmadiyya Muslim Community is presented below.

“All distinguished guests:  Assalamo ‘Alaikum Wa Rahmatullah – peace and blessings of Allah be upon you all.

We are gathered here today to lay the foundation stone of the first mosque of the Ahmadiyya Community in Belgium. This mosque is being built so that we can have a place to worship the One God, where we can worship together as one people, and bow before Him and seek His blessings. To begin with I would like to thank the guests here today, who even though are not Ahmadis or Muslims, have come as a result of their connection with certain Ahmadis; or perhaps due to their good impression of our Community (as has been described by the Priest of this area) or they have come having been invited for the first time. In any case, your presence shows that irrespective of differences of religion, you have come here to maintain good relations and share human values. Not only am I thankful for your coming here, but from the depths of my heart, I respect and appreciate this gesture of goodwill. May God Almighty reward you for this.

As you all are well-aware, in this age of fast communication, the electronic media has exposed the cultures, traditions and religions of people of different countries of the world. There is no incident that takes place that does not reach the corners of the world within just a few minutes. Also, due to the ease of travel, nations are coming close together. Or, in other words, the world has become a global village. I will regretfully say that where there are some benefits of a global village, there are some drawbacks as well. There is no doubt in the plain truth that there is good and bad in every person, in every society and in the people of different nations. But all the same, no religion instils bad or evil in the mind of anyone. Rather, religion, which is brought by the prophets, teaches us to dispel evil and adopt and follow good deeds. Similarly, the Holy Prophet(saw) of Islam taught us that we must discharge the duties we owe to our Creator, and fulfil the rights we owe to our fellow beings. 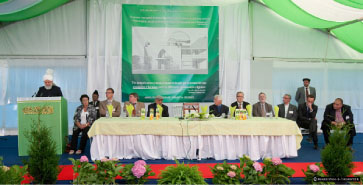 Unfortunately, today, certain deeds of some Muslim groups which are contrary to the teachings of Islam, and are committed in its name, portray Islam in a bad light. The opponents of Islam then try to find faults and means to defame it. The Muslims who carry out such misdeeds have given so much ammunition to the anti-Islamic groups, that they are taking advantage of this and are using the media to project Islam in the wrong light. The everyday man on the street does not question or query what he is told, and so he thinks that the propaganda against Islam must be true. The more educated or the researcher, however, tries to investigate the matter to a deeper level. I am happy to say that you, who have come here, are among those who are not merely influenced by hearsay, but are trying to get to know us (as the Priest mentioned, he was trying to search on the Internet about the Ahmadiyya Community.) It makes me happier to know that when some people raise slogans against the construction of this mosque, our neighbours and the people of the area pay no heed to their protests. Rather, they condemn them. I pray that this attitude and gesture should remain forever, so that the peace of this area is everlasting.

As far as we Ahmadis are concerned, we are law-abiding people. We are those who show or try to show high morals. We are the people who always show patience. These are not only the words of mouth, but in reality, despite being treated brutally and cruelly in some countries, we never ever retaliate. You will find this behaviour of Ahmadi Muslims everywhere in the world. This is because we are the followers of that Reformer of the Age who was the true follower of the Holy Prophet(saw) of Islam, who came to bring man closer to his Creator and to make man realise his duty towards his fellow beings. With this agenda, with which the Founder of the Ahmadiyya Community appeared, whom we consider to be the Promised Messiah(as) and Reformer of the Age, how can it be possible that the mosque of the Ahmadiyya Community could cause disturbance in the area or anywhere in the world? We are only here to bow before our Creator. We are here only to practise and spread love, affection and brotherhood. We are here only to create peace and harmony in society.

When this mosque is constructed, you will see that what I am saying is true. This mosque will manifest the teachings of love and patience and peace, which are true and real teachings of Islam. All the religions of the world are in need of religious harmony, and all the people of the world need a spirit of love, affection and brotherhood to be created. Furthermore, there is an urgent need for mankind to recognise its Creator, as this is the only guarantor for the survival of humanity. Otherwise, the world is rapidly moving towards self-destruction. It is my prayer that we all understand our responsibilities and play our role in establishing peace and love, and in establishing the recognition of our Creator in the world. I pray that we are saved from the destruction that awaits us.

Finally, I would like to once again thank the honourable guests, who have spared their time, and whose presence has made this such an enjoyable evening. Thank you very much.” 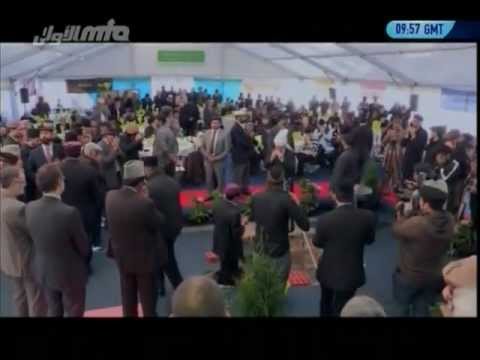