Azan – The Call to Prayers

by Ataul Mujeeb Rashed, Imam of the London Mosque

“O ye people, hurry up to join the congregational prayer. Hurry up because this is the real and complete success.”

This is the theme of the message contained in the Azan, the formal call to congregational prayers in Islam. No other announcement or pronouncement is called that often in the world. This Divine invitation is extended to the people of the world billions of times every day at various times. It is a practice that is going to continue to the end of days.

In Islam, there are five obligatory prayers to be offered each day by all Muslims, men and women. The congregational prayer is held in a Mosque, and, according to the teachings of Islam, Azan should be called before each prayer. The purpose of the Azan, literally meaning pronouncement and declaration, is quite obvious from its meaning. It is made to let the Muslims living in that vicinity know that the time for prayer has approached and that they should get ready for it.

The Azan is to be called in a loud voice, sometimes through the public-address system, so that it is audible to all the people living far and near the neighbourhood. The Holy Prophet of Islam (May peace and blessings of Allah be upon him) is reported to have said that even a solitary person in the dessert is to make the call for prayer in the formal way. Who knows, somebody, upon hearing the Azan, may join this person in prayer. Even if no one turns up, he would be benefitted on the day of Judgement when the stones, bushes and other things would bear witness in the presence of Allah that he did pronounce the oneness and the greatness of Almighty Allah at that time.

Different methods are adopted by other religions to invite the followers to their place of worship. Some beat drums, others blow trumpets and some toll bells. Unless someone understands the meaning of this clamour, it is impossible to understand its significance. How is the knell or toll of bells different from the ringing for mass? It is impossible to know the full message of the invitation as such sounds are not self-explanatory. Without knowing the source of this invitation or the purpose for which one is being asked to attend, no one could be supposed to make the necessary preparations to rise up to the occasion. If such a person, who is not aware of the significance of the invitation, does step in to the place of worship, there can hardly be any real hope to presume that he would be able to offer the prayer with full concentration and solemnity that prayers deserve.

Islam does claim to be the most perfect religion for mankind. The institution of Azan can be cited as another clear example to uphold this claim. The Azan is a way to invite Muslims to their congregational prayers. The different phrases of the Azan are not only meaningful, but add to the purposefulness of the whole practice. Any person, who hears a Muslim calling to prayers can easily understand the meaning of the words, provided he understands Arabic and no matter what religion he belongs to. The explicit meanings blend very well with the sweet call to prayers.

The very first words the  مؤذن moazzin (one who makes the call to prayers) utters are:

اللہ اکبر (Allaho Akbar) Allah is the greatest. The opening word is اللہ (God). It attracts the attention of the listeners. Allah is the creator, the maker and the giver of all that man can think of, nay, even much more than his imagination. The mention of the attribute of Greatness draws further attention and attaches greater importance to it. This phrase is repeated four times thereby asserting the opening pronouncement.

The Muazzin then proceeds to say:

I bear witness that there is none worthy of worship save Allah;

I bear witness that Muhammad is the messenger of Allah. 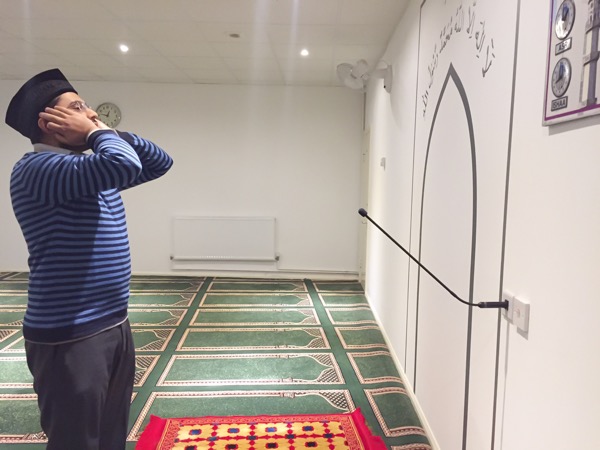 The Moazzin calls the Azan.

This part of the Azan deals with the cardinal principle and belief in Islam. Islam is a beautiful combination of belief and practice which leads a man to complete salvation through firm belief in realities followed by righteous deeds. As the biggest reality in the world is the existence of God, belief in one God with all His immense and charming qualities is the pivotal belief in Islam. The proper understanding of Allah can be made by having full perception of various attributes of Allah.

According to Islamic belief, the Holy Prophet of Islam, peace and blessings of Allah be upon him, is the greatest manifestation of the attributes of Allah in this universe. Unlike the other prophets of Allah, who are His divine representatives, he has been given the unique status of being خاتم النبیین Khatamun Nabiyyeen (the best of all Prophets). In this sublime position as the chief and master of the prophets, he enjoys the privilege of having the lion’s share of divine blessings. His example is the best one, for seekers after the nearness to God; he is the spiritual guide like the well-known constellations are to navigators. The Holy Prophet (pbuh) received the final and complete revelation from Allah in the form of the Holy Qur’an. Through his divinely inspired wisdom and knowledge, he expounded the teachings of the Holy Qur’an and put it into practice during his sacred life. To know him is to know God and to follow in his footsteps is essential for progress in spiritual fields. The belief in the prophet hood of Muhammad, peace and blessings of Allah be upon him, the holy founder of Islam, is therefore the second most important thing to believe. In a way, both the beliefs in Allah and the prophet hood of the Holy Prophet cover the rest of the beliefs. This is why they have been incorporated in Azan, giving in a nutshell, the primary introduction of Islam to non-Muslims.

Then comes the central theme of Azan. The Muazzin says:

‘‘O ye people, hurry up to join the prayers, hurry up because this is the complete prosperity.”

It is required of the people that as soon as they hear this call, they should  start getting ready leaving all the worldly businesses aside, no matter how important these may be. The separation from one’s job sometimes involves a great sacrifice of time and money. While making this sacrifice, if one is mentally contented and satisfied, his devotion and steadfastness would greatly increase. This is why the call to prayer is immediately followed by a mighty assurance of prosperity to strengthen the hearts of the believers and to grant them the surety regarding the efficacy of prayers.

Prayer is the real soul if life. Through prayers, one establishes and develops communion with Allah which causes His blessings to descend and illumine his darkness and failures. Prayer is the key to abundance and once in possession of this key, the doors of success in all fields are open to you. This last part of the call for prayer offers a possible answer to the question often asked as to why a Muslim should prefer to go to offer his prayers. The answer which comes in the form of an eternal truth leaves no shadow of doubt in the mind of a true believer and he decides to go ahead with his little sacrifice happily and without the slightest hesitation. Such is the logical way of invitation adopted in Islam. It is said that in Saudi Arabia, when Azan is said, the shop-keepers immediately stop their bargaining’s and hasten forth to the mosque leaving their shops completely unattended.

After the actual message has been given and its benefits explained, the greatness and oneness of Allah is repeated.  Towards the end of the Azan, the Muazzin says:

“Allah is the greatest and I bear witness that there is none worthy of worship save Allah.”

This phrase which marks the end of the Azan reminds both the moazzin and the listeners that the most glorious reality on the surface of the earth is the existence of Allah. He is the Supreme One, Lord of the universe. He is the only one to be worshipped and blessed is he who knows this truth and spends his life in complete submission to His commandments.

Taste of Worship and Etiquette of Prayers
Salat Guide
Our Identity - the essence of who we are
The Observance of Prayer
Remembrance of Allah lying on your sides
Go to Top
Start Here
Research
Contact Us
Follow Us
Copyright © 2022 Ahmadiyya Muslim Community. All rights reserved.
Privacy Policy | Use of Cookies | Terms of Service | Sitemap
Start Here