The binding of hearts – Love between Ahmadis and the Khalifa 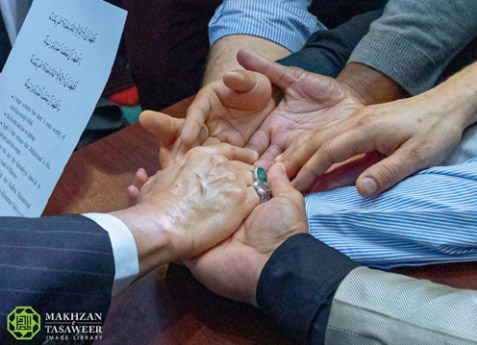 “And He bound the believers’ hearts to one another in affection [to the point that they were prepared to sacrifice their blood in place of your sweat, O Prophet]. If you had spent all that which is in the earth, even then you would not be able to bind their hearts in such a manner. But Allah has placed mutual affection between them [and deep love for you]. Verily, He is the Mighty, the Wise.” (Ch.8: V.64, Tafsir-e-Saghir Translation)

“The binding of hearts” (ta‘lif-ul-quloob) is an extraordinary and powerful expression of love depicted in the Holy Quran. Like the compilation of individual pages into one book, the word ta‘lif means collecting many things into such a state that one name becomes applicable to them all, whether the individual components bear relation to each other or not. (Dictionary of the Holy Quran, p. 27; Lane’s Lexicon, Book 1, p. 80)

Such is the condition of the hearts of Ahmadis and our beloved Khulafa.

Hazrat Khalifatul Masih III(rh) once explained how the binding of hearts was a reality manifested in the shape of Ahmadiyyat.

In 1967, while in Denmark, a Christian priest asked Huzoor(rh) what his status was in Jamaat-e-Ahmadiyya. Huzoor(rh) replied by saying that his question was incorrect.

Indeed, there is absolutely nothing as pure and sincere as the love that exists between Ahmadis and the Khalifa. It is a type of love that transcends tribal, ethnic, national, and political boundaries. It is a love that is, in many respects, no less than a miracle of God.

Flipping through the pages of our book of love, we find innumerable instances that manifest the reciprocal affection shown by Ahmadis for their beloved Khulafa and – even more inspiring – the love shown to us by them.

Once, when Hazrat Khalifatul Masih I(ra) was unwell, members of the Jamaat prayed fervent prayers for Huzoor(ra) that truly reflected the pain and anguish that a child feels for his ailing mother. As companions of the Holy Prophet(sa) were prepared to shed their own blood before a drop of sweat appeared on the blessed face of their Beloved Master(sa), so too were Ahmadis ready to lay down their own lives for their Khalifa(ra).

Sheikh Muhammad Hussain Sahib prayed, “O Allah! I pray that all of Huzoor’s suffering be transferred to me instead and he be relieved of it all.”

Syed Iradat Hussain Sahib prayed, “O Allah, I beg you, take two years away from my own life and grant them to Huzoor instead.” (Tarikh-e-Ahmadiyyat, Vol. 3, pp. 329-331)

As a child cannot bear to be distanced from his mother, Ahmadis also feel the pain of being away from their beloved. When Hazrat Musleh-e-Maud(ra) embarked upon his tour of Europe in 1924, Babu Siraj-ud-Din Sahib Station Master expressed feelings that Ahmadis across the globe still resonate with even today: 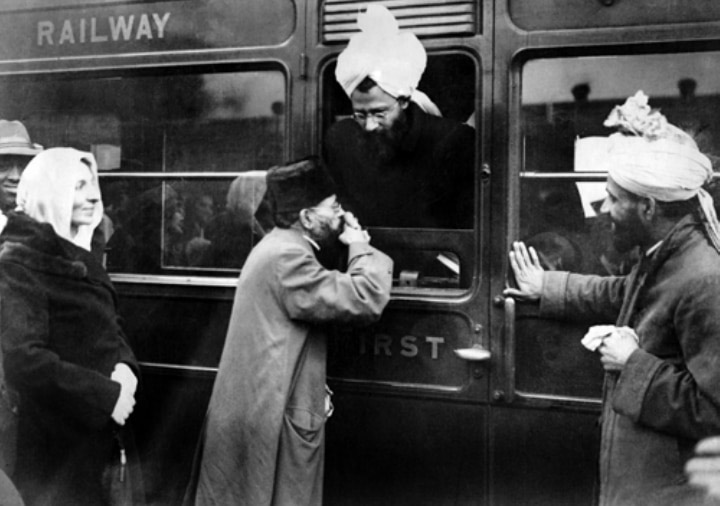 “My Beloved Master, we are far from you and are helpless. If it was possible, we would become the dust upon Huzoor’s shoes so we would not have to endure the agony of separation.” (Swaneh Fazle Umar, Vol. 5, p. 475)

This was merely a reflection of Hazrat Musleh-e-Maud’s(ra) love for members of the Jamaat. Huzoor(ra) once said:

“You have someone who has true sympathy for you; who truly loves you; who considers your pain and sufferings to be his own; and who is always praying to Allah for you.” (Blessings of Khilafat, p. 6)

The scope of a khalifa’s prayers encompasses all Ahmadis. Hazrat Hafiz Mirza Nasir Ahmad(rh) once said:

“I often pray during the sajda [prostration], ‘O God, in respect of those who have written to me, please relieve them of their anxiety, sickness or worries about their examinations. In respect of those who wanted to write to me but could not, please shower Thy Mercy on them as well. And please show Mercy on those who become averse or lazy.’ I say this prayer because I have a relationship with everyone and deep in my heart lies love and affection for all.” (A Glimpse into the Life of Hazrat Khalifatul Masih III(rh), by BA Rafiq, p. 10) 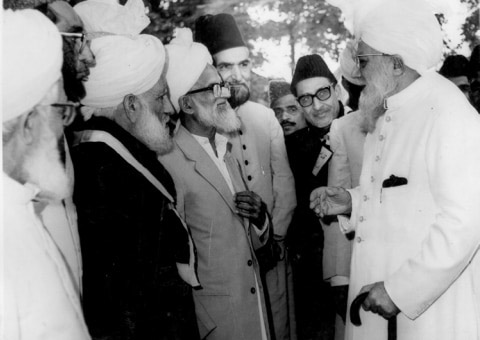 A day before migrating to London in 1984, Hazrat Mirza Tahir Ahmad(rh) told members of the Jamaat in Masjid Mubarak, Rabwah:

“I have not gathered you to address you with a formal speech. I simply wished to see you, for my eyes are cooled and my heart is comforted by seeing you. By Allah, I love you more than a mother could love her own child.” (Monthly Khalid, Syedna Tahir Number 2004, p. 36) 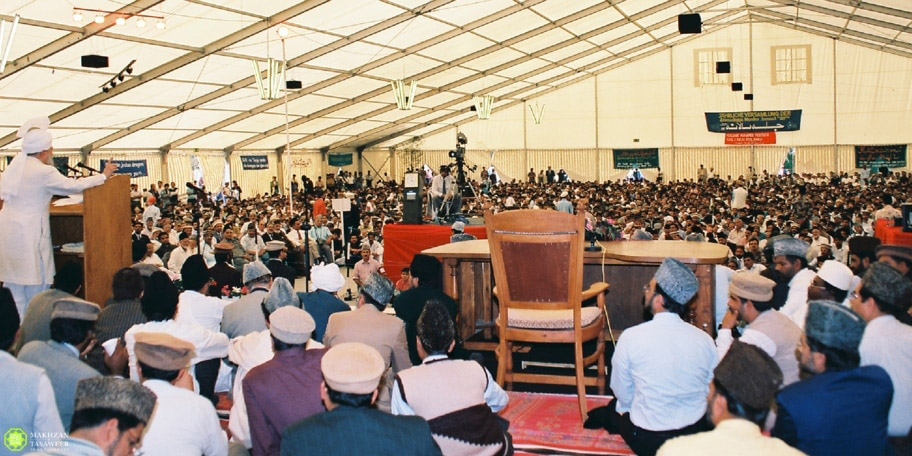 Imam Ataul Mujeeb Rashed Sahib writes that an Ahmadi from Canada brought a non-Muslim, Professor Dr Gualter, to meet Hazrat Khalifatul Masih IV(rh) in London. Ataul Mujeeb Sahib realised that it was his first time meeting Huzoor(rh) so he thought it appropriate to tell him a little about who he was about to have an audience with. Ataul Mujeeb Sahib writes that when an Ahmadi speaks about the Khalifa of the time, the love he has for Khilafat in his heart naturally manifests itself – as it did when he began to speak about Khilafat.

Dr Gualter then went and had the honour of an audience with Huzoor(rh). When he came out of Huzoor’s(rh) office, he shared his observation with his Ahmadi host, saying, “When I met with Imam Rashed Sahib, I perceived that Ahmadis have great love in their hearts for their spiritual leader. But after meeting with their spiritual leader, the Khalifa, I have come to the conclusion that the Khalifa loves Ahmadis much more than they love him!” (Monthly Khalid, Syedna Tahir Number 2004, p. 299)

Our beloved Imam, Hazrat Khalifatul Masih V(aa) has immense love for each and every one of us. In the Friday Sermon of 6 June 2014, Huzoor(aa) stated:

“Before sleeping at night, there is no country of the world that I do not visit in my imagination and no Ahmadi for whom I do not pray whilst sleeping and whilst awake.”

One need only glance at the diaries of Abid Khan Sahib to get a glimpse of the mutual love and affection shared between Ahmadis and Huzoor(aa). The importance of reading these diaries is apparent from the fact that during Huzoor’s(aa) visit to Germany in 2015, a 16 year-old-boy approached Abid Sahib and said that until he had learned about Huzoor(aa) from the diaries, he did not love Khilafat in the way that an Ahmadi should; but having read them he had seen just how much Huzoor(aa) loved the Jamaat and why we needed Khilafat. (Diary of Germany Jalsa 2015, Part 1) 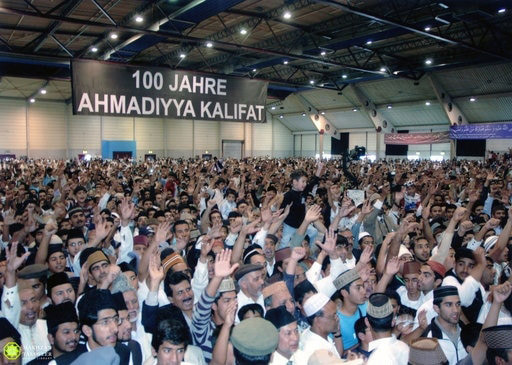 There are countless examples of mutual love to be discovered in these diaries that refreshes and revitalizes one’s love for Khilafat. The families of Shuhada (martyrs) who received personal phone calls from Huzoor(aa) giving them comfort in a way only a Khalifa could; children of martyrs telling how they receive Eidi personally from Huzoor(aa) every year; when Huzoor(aa) told Amir Sahib France that the Ahmadis who were eating lunch after Friday prayers should be well fed and Huzoor(aa) would personally cover the costs if he could not; Huzoor(aa) embracing and consoling the family of a Lajna member of Ireland Jamaat who passed away from cancer; the elderly man from Ohia, USA who said that the rest of the world was struggling and facing increasing difficulties but Ahmadis constantly feel at ease due to the blessings of Khilafat; how carefully and lovingly Huzoor(aa) takes care of each member of his entourage while on tour; Huzoor(aa) visiting the homes of Jamia Germany professors and commenting that when he was unable to visit them during his previous tour he felt a burden in his heart for 18 months; Huzoor’s(aa) many expressions of humility that bring tears to the eyes; journalists who were amazed and touched by the devotion of Ahmadis to Khilafat; Huzoor(aa) continuing to carry out his duties despite being in pain and discomfort, opting to rest in the car during a journey; and the list goes on and on and on.

This love that both the Ahmadis and beloved Huzoor(aa) express for each other are visible to everyone.

A French-speaking journalist from Benin once said to Huzoor(aa), “Whilst I have been here [at Jalsa UK] I have seen that your people love you very much. They do not worship you, but their hearts are overflowing with love for the Khalifa and in the same way it seems that you sincerely love each and every Ahmadi and you have a personal relationship with them.”

“This is a sign of the truth of Ahmadiyyat, whereby there is an everlasting spiritual bond of love between the Khalifa and the Ahmadis … this connection and attachment is natural and has been implanted in the hearts of Ahmadi Muslims by Allah the Almighty. It is a continuation of the two-way love that existed between the Holy Prophet(sa) of Islam and his Companions.” (Diary Jalsa UK 2016, Part 4)

Without a doubt, it is the love for Khilafat that unites Ahmadis across the world. Commenting on this very point, Huzoor(aa) once said to Abid Sahib:

“You were with me on my tour of Africa in 2008 and so you have seen the African Ahmadis and now you have seen the Far Eastern Ahmadis. You will have realised that the love for Khilafat is universal and not exclusive to Pakistani Ahmadis.” (Diary Singapore 2013)

During the tour of USA and Guatemala, Huzoor(aa) commented on the Ahmadis in USA, saying:

“The way they meet and talk is different to the Ahmadis from the UK and Europe but, in almost every mulaqat, after a minute or two their sincerity and their love and loyalty for Khilafat becomes apparent. So, the style amongst Ahmadis in different countries can be different but the love for Khilafat is the same across the world.” (Diary USA and Guatemala 2018, Part 4)

Indeed, the love expressed by Ahmadis for Khulafa is but an evaporating drop from the ocean of love given to us by them. Through His grace and mercy, Allah has bound our hearts and united us in love as a favor from Himself.

It is our responsibility as Ahmadi Muslims to recognise this blessing and Mercy of Allah, be grateful for it, pray fervently for our Beloved Imam(aa) and strive to build a strong relationship with him through all means available to us.

May Allah continue to shower the Jamaat with the blessings of Khilafat and may He pour down the showers of His grace and mercy on the Khilafat of our Beloved Imam(aa), amin thumma amin.

Expansion of the Muslim dominion during Khilafat-e-Rashida
The Divine guidance about leadership in the latter days
Philosophy of the System of Khilafat
Temporal and Spiritual Authority of the Institution of Khilafat
Khilafat: Unity of Man and Peace
Go to Top
Start Here
Research
Contact Us
Follow Us
Copyright © 2021 Ahmadiyya Muslim Community. All rights reserved.
Privacy Policy | Use of Cookies | Terms of Service | Sitemap
Start Here