Establishing Peace, Love and Harmony in the Society

Address at a reception in Ernakulam, Kerala, India

The following is an address given at the Taj Residency Hotel, Ernakulam, Kerala on 30 November 2008. 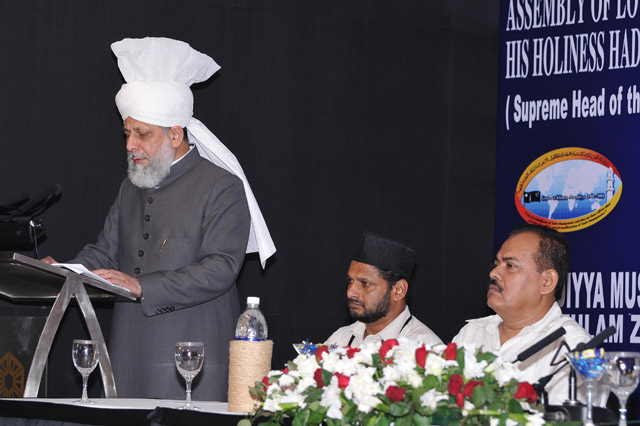 Assalamu ‘Alaikum Warahmatullah to all the respected and honourable guests.

First of all I would like to thank all the distinguished guests, who with an open heart and kindness have joined us here today. By doing so you have fulfilled the humanly bond of friendship and have shown that you hold in high regard the sentiments of others. India is a vast country where people belonging to different casts and religions abide, and for the survival of the nation it is important to respect the feelings and sentiments of each other.

Today the world consists of people belonging to different religions and the founders of those religions have all taught their followers to worship the one God and discharge the rights owed to Him and His creation. About 1400 years ago, God Almighty sent the Holy Prophet(saw) and the law revealed to him in the form of the Holy Qur’an. About this law-bearing book, God Almighty has said in the Holy Qur’an:

Verily We ourselves have sent down this exhortation and most surely We will be its Guardian. (Ch.15:V10)

Hence, to this day the Holy Qur’an is still in its purest form with no alteration to it. Several Orientalists have also attested to this fact. This book was revealed to the Holy Prophet(saw) 1400 years ago, as I have said, and upon reflection over it we come to know that it comprehends a wide range of subjects. Where it confirms the coming of the prophets in various nations, it also verifies their true teachings. It teaches man how to discharge the rights owed to one another, on what conditions war is permitted, and to what extent war should be fought. It also informs us about the inventions that are to be expected in the future ­– that is, today’s inventions – how trade should be done, and so on just to name a few.

If one observes the Holy Qur’an critically, its teachings can be summarised into two main areas. One, recognition of our Creator, and secondly, discharging the rights owed to His creation. Even though some critics do not understand some teachings of the Holy Qur’an, or do not believe in them, they do, however, admit to its originality. To understand the Holy Qur’an properly one needs determination and purity of heart. Since the advent of Islam, the Holy Qur’an has been explained to people by the Holy Prophet(saw) himself, who taught it to his companions; then after him, other pious people also studied, understood and explained it to others for decades. 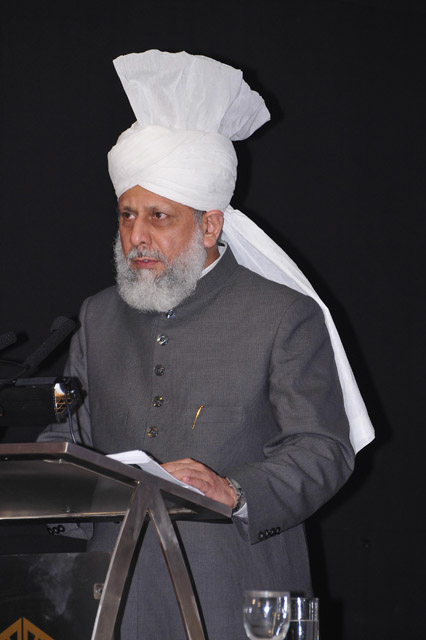 We also believe that in every century, God Almighty has sent reformers amongst Muslims, and these were responsible for spreading the true teachings and message of Islam to all, be it Muslim or Non-Muslim. Some of such reformers came to the Indian sub-continent. Then in 1889, the founder of the Ahmadiyya Muslim Community, from Qadian in Indian, claimed to be the reformer and the Messiah and Mahdi who was to appear in the fourteenth century, as was prophesied by the Holy Prophet(saw).

We Ahmadis, believing in his claim, belong to his community and accept him to be the Messiah and Mahdi who was to unite all people, both Muslims and Non-Muslims, under the One God, so that religious differences would be removed from the world, and so that people would start to realise the purpose of their creation as taught by all prophets, and that is discharging the rights owed to their Creator, and discharging the rights owed to one another.

The Founder of the Ahmadiyya Muslim Community, Hazrat Mirza Ghulam Ahmad Qadiani, the Masih-e-Mau’ood(as), also announced that the purpose of his advent was to strengthen the bond between man and his Creator and secondly to draw man’s attention towards discharging the rights owed to God’s creation. He taught that man should come closer to his Creator by worshipping Him and must discharge the rights owed to one another in order to remove all grievances and religious disputes that arise amongst people. He also mentioned that these were in accordance with the Qur’anic teachings. Here one should note that God sometimes speaks metaphorically, which becomes difficult for people to comprehend. Therefore God sends messengers into the world to explain and convey God’s message to them which had been revealed to the Prophets in the past. According to our belief, Hazrat Masih-e-Mau’ood(as) is that special reformer whom God Almighty sent in this age to convey God’s message to us.

I will now briefly elaborate on what the Holy Qur’an teaches us regarding the establishment of peace in the society and the discharging of each other’s rights. We Ahmadis try to ensure that we always abide by these teachings and share it with others so that the world becomes a haven of peace, love and harmony. Muslims have been commanded to abstain from evil and adopt virtue and righteousness. To this effect it is stated in the Holy Qur’an:

You are the best people raised for the good of mankind. You enjoin good and forbid evil and believe in Allah. (Ch.3:V.111)

Hence, people who believe in the Holy Qur’an have been advised to show integrity in all their endeavours and work to promote goodness and righteousness within their societies. But before one can counsel others towards such ways, one must practice what one preaches. You cannot counsel others if you do not follow the path of righteousness yourself. If all people who claim to be righteous abided by this principal then their counsel would be effective; they would be considered valued members of the society. Others would respect them, give importance to what they say, and obey them since they understand that this person is adopting such an approach not for his own good but with the welfare of others at heart. He exercises extreme justice in his dealings and when enjoining others to abstain from evil and adopt virtue, he also expects this from his dear ones.

How (are we) to establish justice and promote peace, love and brotherhood in society? The Holy Qur’an says:

And when you speak observe justice, even if the person concerned be a relative, and fulfil the covenant of Allah. (Ch.6:V.153)

Justice requires that even if you have to give evidence against your dear ones then do so. Today, when we take a closer look around us, we observe that most of the disputes and causes of dissention amongst people are due to not observing proper justice. We only think of our vested interests, or that of our dear ones, without considering the fact that the others might be hurt by our actions; and once grievances develop it becomes difficult to eliminate them.

In terms of international relations, the level of justice we are expected to show is commanded by the following words in the Holy Qur’an:

O ye who believe! Be steadfast in the cause of Allah, bearing witness in equity. And let not a people’s enmity incite you to act otherwise than with justice. Be always just, that is nearer to righteousness. And fear Allah; surely Allah is aware of what you do. (Ch.5:V.9)

This is the high standard of justice to be established in society. To remove all enmities and dissention from the world we have to show justice to such an extent that a people’s enmity should not cause us to act otherwise than with justice.

When God Almighty has said that He is All-Knowing and All-Hearing, then for the person with the fear of God in his heart, this is a grave matter, because one can pull the wool over someone’s eyes but cannot deceive God. You can go against your agreements with people and deceive them, but God knows what is apparent and what is hidden in our hearts. So we cannot act cleverly before Him. God Almighty has commanded us to always behave justly, keeping the fear of Allah in mind, and to discharge the rights owed to one another with the fear of God in one’s heart. When you make agreements with your enemies, do so with purity of heart, and with the intention of establishing justice in the world. And one who believes in God should remember that God is watchful over all that one does. This beautiful teaching helps us in removing all enmities from the society. 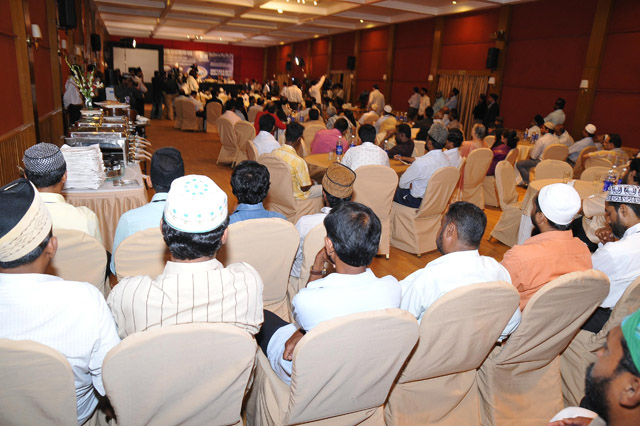 This Qur’anic teaching, and the Holy Prophet’s(saw) action has shown Muslims the right path to follow. Today, opponents of Islam criticise it for using force and say it is extremist in nature; however, this allegation is totally unfounded. Islam is a religion of peace, love and harmony. In its history, if ever wars were fought, then they were because they were initiated by the enemy. Even in such wars, the Holy Prophet(saw)always expected justice to be carried out. He always ordered his companions that no child, no woman, and no old or weak one were to be harmed. No religious leader belonging to any religion, living peacefully in his house of worship was to be hurt. Even trees were not to be felled in enmity.

Wars were only between one army and the other. What more beautiful and virtuous action shown like this by the Holy Prophet(saw) can you expect from someone? In comparison, when you see wars fought today, it is the innocent civilians and inhabitants of cities and towns who are affected. It is the innocent and weak members of society who come under the fire of this cruel bombardment. Islam never teaches such cruelty. Alas! Today this beautiful teaching is being ignored and misconstrued by some Muslim groups, consequently defaming the name of Islam.

In this day and age we believe in the Imam of this Age, the Messiah and Mahdi, who taught us that under the prevailing circumstances Jihad must be with the pen, by reforming yourself and spreading the message of peace, not the sword. The Jihad of the sword is now not permitted. We must only concentrate on drawing people towards Islam’s beautiful teachings.

The Founder of the community was then succeeded by the institution of Khilafat, which has been established to continue the work of representing Islam’s true teachings and ensuring that people are guided towards the right path through reformation and moral training. According to our belief, based on Qur’anic teachings, there is no compulsion in religion. Everyone is free to profess the religion of his choice, but one does not have the right to degrade other religions or their founders. This is against the teachings of the Holy Qur’an. We have been commanded to respect the feelings of others and draw man towards the worship of his Creator so as to spread peace, love, and harmony in society.

Today, quite a number of people are in the selfish pursuit of seeking the fulfilment of their vested interests, without giving a thought towards discharging the rights due to others. If we do not recognise our Creator and discharge the due rights to one another, the world will be lead to a terrible disaster the effects of which will be seen for years to come and the future generations will blame us for this. It is my fervent prayer that we safeguard ourselves and our generation from such destruction. Once again, I thank you all for having listened to me patiently, may Allah bless you all. Thank you.

Humanity First – Wiping Away the Tears of the Distressed
Safeguarding Yourself From the Toxic Glamour of the World
The Immense Responsibilities of Members of Khuddamul Ahmadiyya
Fulfilling the Rights of Others
Extraordinary Progress of the Ahmadiyya Muslim Community Throughout the Year
Go to Top
Start Here
Research
Contact Us
Follow Us
Copyright © 2021 Ahmadiyya Muslim Community. All rights reserved.
Privacy Policy | Use of Cookies | Terms of Service | Sitemap
Start Here