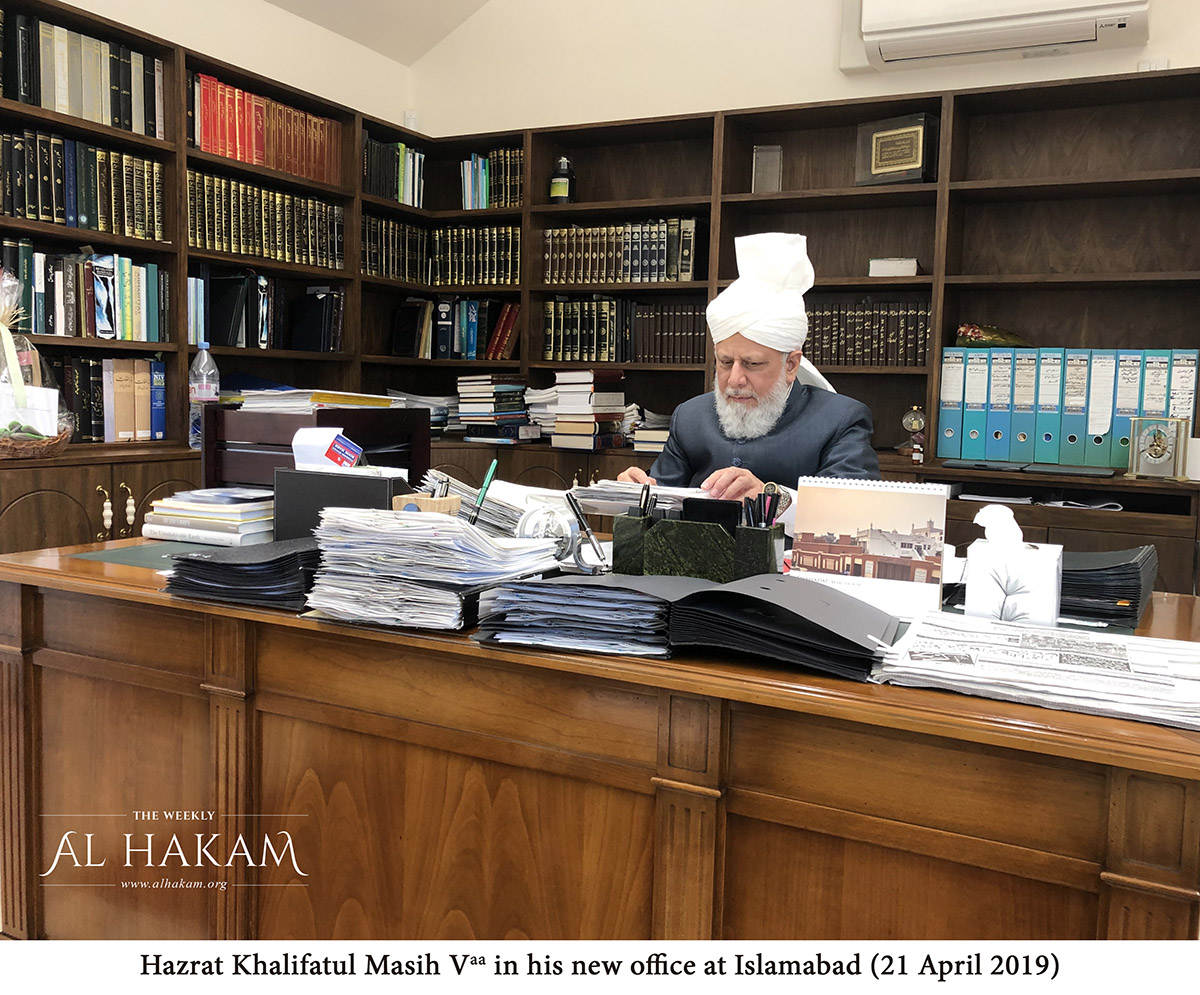 On 20 March 2020, towards the end of his Friday Sermon, Hazrat Khalifatul Masih V, may Allah be his helper, issued instructions pertaining to the recent outbreak of coronavirus.

This morning [21 March 2020], in my mulaqat [meeting], Huzoor(aa) gave insightful remarks regarding the current state of the world, the views of experts and the reaction of the general public.

“Some Ahmadis have referred to this illness as plague. Some say that this is a sign, similar to that of the plague. Prior to the time when the plague broke out, Allah the Almighty informed the Promised Messiah, peace be upon him, regarding it. Thus, the plague served as a sign [from God].

“Then, prior to that very outbreak of plague, Allah the Almighty informed the Promised Messiah(as)that his followers would be protected. Thus, the plague became a sign in this manner also.

“In spite of this, the Promised Messiah(as) continued to pray for the world generally that it be saved from this epidemic and beseeched Allah’s mercy.

“Neither was this coronavirus foretold, nor have I ever expressed that this is a sign that has appeared.”

After saying these words, Huzoor(aa) paused. I was about to say something, when Huzoor(aa) continued:

Thereafter, Huzoor(aa) proceeded towards his bookshelf and picked out the fourth volume of Tarikh-e-Ahmadiyyat. Immediately, Huzoor(aa) found the passage he was searching for. Huzoor(aa) said:

“Hazrat Musleh-e-Maud(ra), in fact, even wrote down his will elaborating what should be done, in case the worst was to happen to him.”

Huzoor(aa) read out the relevant passage that spans over two to three pages. An extract from this passage is being copied below:

After World War I, in 1918, an epidemic of influenza broke out; it was as if this outbreak caused more havoc in the world than the battlefields of the war itself. India was also greatly affected by the influenza eruption and saw deaths at an unprecedented level in a matter of days.

During the outbreak, through the guidance of Hazrat Khalifatul Masih II, may Allah be pleased with him, the Ahmadiyya Muslim Community provided great aid, service and relief for the wider public to encounter the consequences of the epidemic. Regardless of race, religion or creed, the community provided help and relief to people from every background.

Ahmadi Muslim doctors and medics not only voluntarily helped the populace in Qadian, India but from town to town and village to village they ensured medical help reached even the most isolated and deprived. Other members of the Ahmadiyya Community stepped forward and served as nurses etc.

The poor were assisted by the community through financial means and provision of supplies and food were distributed. In the days of the influenza outbreak, Ahmadi Muslim volunteers (which included Hazrat Sahibzada Mirza Bashir Ahmad) painstakingly toiled night and day, despite great difficulties, and served those in need. In some instances, when volunteers were scarce, Ahmadi volunteers who had fell ill themselves, continued to grit through and serve the ill. They would endure the pain themselves and continue treating others until their illness would cause them to drop; they had sacrificed their own rest and treatment for others.

This service was such that both friend and foe commended the sacrifice and efforts of the Ahmadiyya Muslim Community. Through articles and speeches, everyone applauded and recognised the great example the Ahmadiyya Muslim Community set through their constant hard work, sacrifice and efforts in aiding those in need during the influenza outbreak of 1918.”  (Tarikh-e-Ahmadiyyat, Vol. IV, p. 208-209)

“These epidemics will keep happening. It is absolutely wrong to declare every such outbreak to be a divine sign. It is also wrong to say, as some do, that Ahmadis will never contract these illnesses or, for that matter, to say that ‘sincere’ Ahmadis will not catch it.

“These epidemics cannot always be made a yardstick for one’s level of faith. The will that Hazrat Musleh Maud(ra) wrote during the Influenza outbreak started with the words: ‘I, Mirza Bashiruddin Mahmud Ahmad, son of Hazrat Masih-e-Maud…’

“So it is Hazrat Musleh Maud(ra) writing the will and mentioning that he is the son of the Promised Messiah(aa). He contracted the illness and that too very severely. This clearly shows that contracting a certain illness is no criterion for one’s faith.”

After this, Huzoor(aa) paused again. However, I felt as though Huzoor(aa) would continue this subject further, and so, after a second’s pause, Huzoor(aa) said:

“Find this reference and publish it in Al Hakam so that everyone may read it and all misconceptions may be removed. If this [coronavirus] was a sign, then first and foremost, I would have announced it that it is a sign.

“I have said it before and continue to say that people should follow the precautionary measures being prescribed to them by experts through authorities in respective countries.

“I have told Amir Sahib [UK], Sadr Khuddam-ul-Ahmadiyya [UK] and Humanity First that during these days, whatever is possible for the welfare and help of people should be done.

“Once you publish this extract from Tarikh-e-Ahmadiyyat, the other countries around the world will also come to know this and the amirs and sadrs of those areas can plan schemes according to this.”

This discussion came to a close with the following words:

“Instead of trying to prove it a sign at this time, Ahmadis should follow the precautionary measures advised to them for themselves, their families and mosques.

“Observing precautionary measures, they should help whoever they can. To please Allah, it is essential that one takes care of His creation and most importantly, beseech Allah the Almighty’s mercy for their own sake and for the sake of mankind.”

Humanity First – Wiping Away the Tears of the Distressed
Safeguarding Yourself From the Toxic Glamour of the World
The Immense Responsibilities of Members of Khuddamul Ahmadiyya
Go to Top
Start Here
Research
Contact Us
Follow Us
Copyright © 2021 Ahmadiyya Muslim Community. All rights reserved.
Privacy Policy | Use of Cookies | Terms of Service | Sitemap
Start Here