Khalifatul Masih, The Muazzin, an Empty Mosque and a Worldwide Audience

Today is 3rd of April 2020 …. It is Friday. Hazrat Khalifatul Masih(aba) is to deliver the Friday Sermon from Masjid Mubarak, Tilford, UK.

I made it a point today, that even though there were not going to be any people to offer Friday Prayer from Islamabad, I would still get ready as I normally did for other Jumma (Friday Prayer).

It was an incredible day…. The likes of which I had never seen in my life or heard of…

At about 12:15, I went to the Private Secretary’s office to make sure everything was fine, and for the liaison about daily activities and to go over the Jumma planning.

It had been decided that Hazrat Khalifatul Masih(aba) would deliver the sermon from inside the mosque and only the Muazzan – the one who calls the Azan or call to prayer – would be present, and there would  be cameras.

All the preparations had been carried out as normal – the MTA staff had checked the transmission van, laid all the cables, and installed the cameras inside the mosque.

I saw the MTA staff standing outside the mosque, next to the transmission van. All of them were ready to go, but there was something different about them.  The MTA staff are truly dedicated to their task, they work hard, but normally there can be a light heartedness about them. Today, they were all quieter than usual. 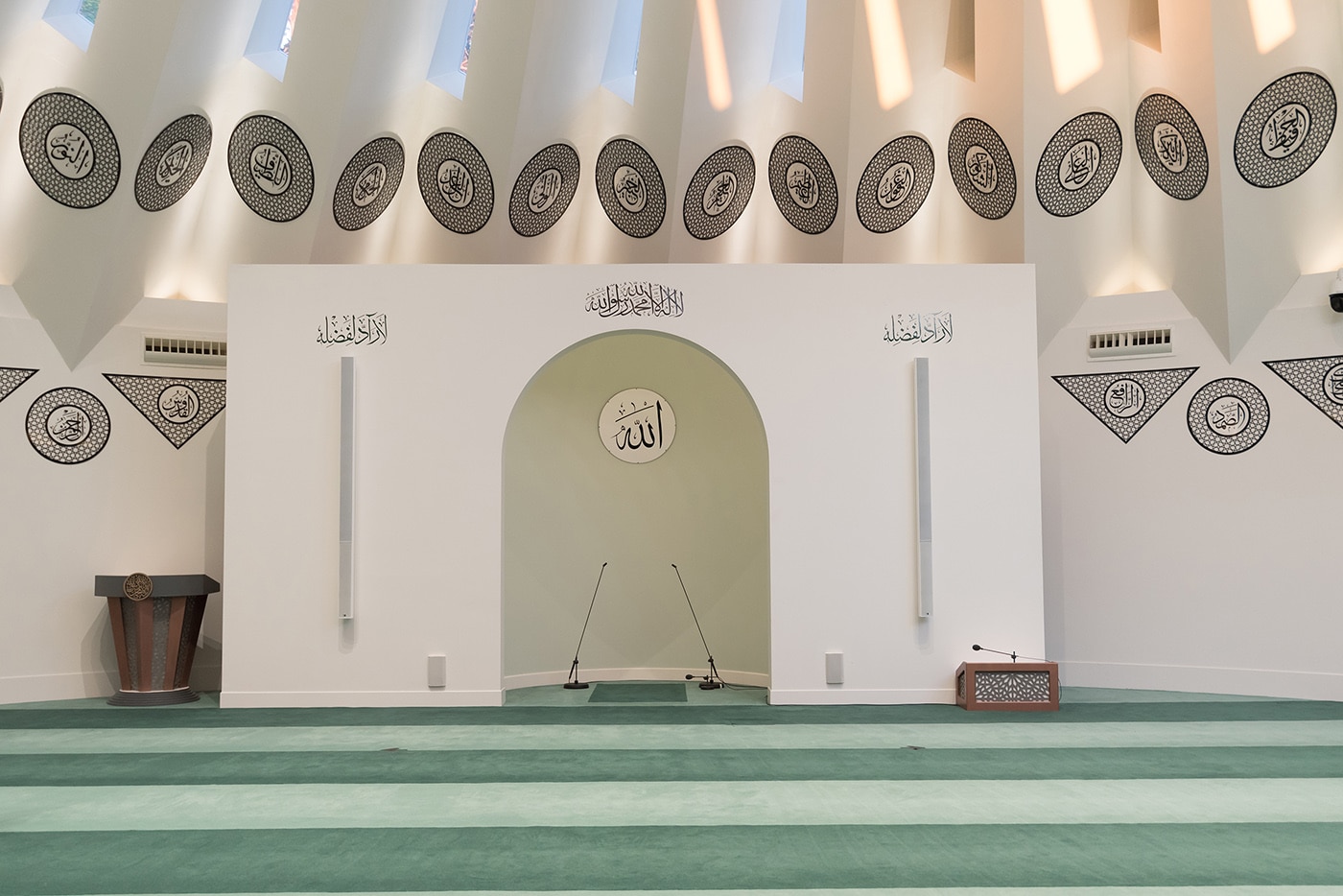 I brought the foam mat out, which we place where Huzoor-e-Anwar [Hazrat Khalifatul Masih V] stands during Khutba (Friday sermon). Then I checked the mosque for security reasons, as I would do, on any other Jumma day.

We checked the sound system, as is the routine.

As the time of the Khutba approached, all the departments which would normally be involved in the Jumma day preparations were active, albeit it on a different and smaller scale.  Security made sure that all the posts were covered. The cleaning crew made sure that Islamabad was ready for jummah. MTA had done all their preparations and the other departments had completed their assigned tasks.

I laid out Huzoor-e-Anwar’s prayer mat, one of the last things we do before Jumma commences.

At about 12:35, a missionary, Safeer Ahmad, who graduated from Jamia Ahmadiyya UK in 2019, came to call the Azan. As he entered the mosque from the men’s entrance, he saw me on the other side of the mosque and raised his two hands putting them in front of his face, as if to ask me for prayers. He was a bit anxious.

As the Azan was being called, it was an extraordinary scene. During normal Jumma days, the mosque would be filled up with people to its capacity. There were none today. The time for Jumma was fast approaching, but inside the mosque there was one lonely soul the Muazzin. It was indeed a sign of these challenging times.

It was partly cloudy outside, with sunlight beaming through some of the long windows.

Though I was moving about inside the mosque, checking everything, I paused. I paused when the missionary called out ‘hayya alas salah’ (come to prayer)……… That was the time, when it hit me as to how people listening to those words ‘come to salah’ (prayer) would hold themselves back and not be able to come to the mosque.

It was a sad moment. But Alhamdolillah, my sadness lasted for a fleeing moment because that sadness was immediately replaced by thoughts that “InshAllah, Huzoor-e-Anwar will come to the mosque and deliver the khutba… it really doesn’t matter if there are people physically sitting in front of him or not… InshaAllah, he will deliver khutba”.

I remembered the story of Hazrat Musleh-e-Maud(ra) when he had proclaimed that “even if the whole world leaves you  (the Promised Messiah(as)), I will continue on.”

At 12:50, I made kawa (a herbal drink) for Huzoor-e-Anwar and placed it on the podium and then went outside the mosque.

Inside the mosque, there was only one person sitting, the Muazzin … what a moment for him!

He walked into the mosque. I followed him, but only to the shoes area. Huzoor walked alone towards the mehrab…. He said ‘salaam’ (peace be upon you) and asked for Azan to be called. He sat down and then started the Khutba….. and the Khutba went live worldwide.

I sat down in the shoe area, the door to the mosque was open… so I could see everything.  Huzoor was delivering khutba. And there was only one person in audience, inside the mosque. And he was sitting to the right of mehrab.

A person could be forgiven for feeling a bit sad, if upon looking at the scene which I saw – Huzoor delivering Khutba with only one person in the audience. That person (the Muazzin) was sitting with his head down, tense, and shaken, that his name will be written in history as probably one of the most blessed of people, due to these challenging events in human history. I don’t think he even moved his body at all. He just remained still.

Somehow I felt that today, more than ever, Ahmadis had tuned in to watch Huzoor’s Khutba.

Maybe these are trying days from our Creator. But I have a firm belief that Insha’Allah one day, that one person who sat in audience will turn into one million… all in front of Huzoor-e-Anwar…. all watching him, all listening to the Khalifa of the Promised Messiah(as), and all being drenched in blessings from the presence of their beloved Imam, InshaAllah.

As Huzoor came out of the mosque, he called over Munir Odeh, Director of Production of MTA. Huzoor asked “sub theek hogiya” (was everything fine?)

Hazoor asked “did you show my face only?”,

I felt that it was significant for Huzoor-e-Anwar to say “sifaat e Bari Talaah” and not just ‘walls’ because in these trying times, Huzoor has again and again alerted the Jamaat to concentrate on prayers and ibadat (worship) and to turn towards the Creator with a new zeal.

Huzoor showed hope… there was peace about him… contentment… and serenity.

Establishing the Truthfulness of the Promised Messiah(as) from the Holy Quran
Islam and bathroom hygiene: The inextricable link between physical and spiritual purity
Expansion of the Muslim dominion during Khilafat-e-Rashida
Go to Top
Start Here
Research
Contact Us
Follow Us
Copyright © 2021 Ahmadiyya Muslim Community. All rights reserved.
Privacy Policy | Use of Cookies | Terms of Service | Sitemap
Start Here