Address to neighbours of The London Mosque

An address by Hazrat Mirza Masroor Ahmad, Head of the worldwide Ahmadiyya Muslim community, delivered on 12th November 2006 to a packed audience of 200 neighbours living within the close vicinity of The London Mosque (also know as the Fazal Mosque). The neighbours had a tour of the Fazal Mosque, saw an exhibition and were later entertained to an evening meal. The Head of the community personally met all the neighbours. 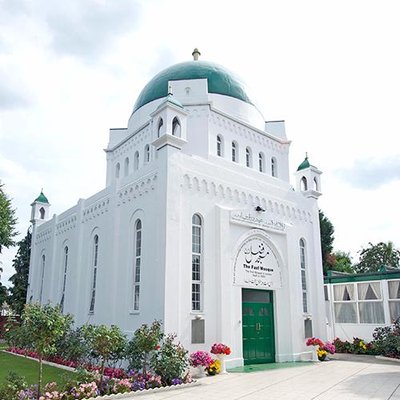 The prayer which I have just recited i.e. Bismillahir Rahmanir Rahim, means as you have already listened to its translation, ‘in the name of Allah, the Gracious, the Merciful.’

This is the first verse of the Holy Qur’an. The Holy Prophet of Islam(sa) is reported to have said, rather he has commanded the Muslims, to recite this prayer before starting any task as otherwise it would be devoid of Allah’s blessings. So with this beautiful teaching, how can a true Muslim be expected to wrong anybody, or do any work with bad intentions, or harm anyone, or create problems of any sort around his surroundings? A person who is starting any work in the name of the Gracious and Merciful God cannot win the blessings and mercy of Allah unless God’s attributes of being Gracious and Merciful are depicted in one’s own gestures towards one’s fellow beings.

In the light of this teaching, I would like to request you to remove any feeling or fear of mischief from Ahmadis residing in your neighbourhood. The Qur’anic teachings for the rights of neighbours are so explicitly laid out that a true Muslim who is always seeking help from the Gracious and Merciful Allah cannot deviate from this, as any slight deviation might cause him to go astray and lose the blessings and love of God.

Allah very beautifully guides us to discharge our duties towards our neighbours and give them their due rights i.e. the rights of all of you sitting in front of me. For this, Allah states in the Holy Qur’an, as you have already listened in the recitation:

See, how beautiful a teaching it is that shows kindness to everyone whether he is kind towards you or not. This is how you can create peace, love and harmony in the society and this also means that all the people residing in your vicinity, town, city or even country are your neighbours. Therefore, give them their due rights. No enmity should crop up in anybody’s mind. This is how you can spread peace, love and harmony in your surroundings.

At the end God reminds us and gives this commandment that if you do not behave in this manner and carry out your responsibility in this regard, you are a proud and boastful person. Remember that Allah does not love arrogant and boastful people. This is the beautiful teaching for creating peace.

Here I would like also to quote a few Traditions or Sayings of the Holy Prophet of Islam(sa) in which we shall see how emphatically he asked his followers to give the rights due to one’s neighbours. One Tradition says:

Muslim’s version is: That one will not enter paradise whose neighbour is not secure against his mischief.

See how clearly he has stated that a person is a non-believer if he causes any mischief to his neighbour. Then another Tradition, it says:

These are the teachings given to us by the Holy Prophet(sa).

To avail this opportunity, I would also like to present my apologies for any inconvenience which might have put you in any trouble or caused you any problem from our side.

Then another Tradition says:

‘Ibn Umar and Ayesha relate that the Holy Prophe(sa) said: Gabriel kept exhorting me about the neighbour till I imagined he would include him in the category of heirs.’ (Bukhari and Muslim)

How can a religion whose teachings are such, be considered as militant? All these militant acts which we are seeing today being committed by some Muslim groups are because of their own vested interests and have nothing to do with the teachings of Islam. As I have made it quite clear by quoting the verse of the Holy Qur’an and the Traditions, I think that if there was any doubt about the attitude of militancy of Muslims in anyone’s mind, it should now be removed.

The Ahmadiyya Muslim community is the true follower of the teachings and is spreading the true message of Islam to the world.

I hope that my words will be enough to remove any doubt as I have already said that you might have had in the past.

Because of the time constraint, I can now smell the appetising smell of the meal. I think I should end here and I hope that having listened to what I have briefly explained about the true teachings of Islam, you would not mind if one day I knock at your front door to enjoy and share my right of neighbourliness. Of course, our doors are always wide open and we very much welcome you at any time with open arms.

Thank you for coming and showing the kind gesture of being a good neighbour. Thank you again.