Sahibzada Mirza Masroor Ahmad Sahib was married on 31 January 1977 to Syeda Amtul Sabooh (Begum Sahiba), the daughter of the Late Begum Sahibzadi Amtul Hakeem and Mr. Syed Daud Muzaffar Shah. He is the father of a daughter, Mrs. Amtul Waris Fateh who is married to Mr. Fateh Ahmad Dahiri of Nawabshah and a son, Mr. Mirza Waqas Ahmad.

At the young age of seventeen, Sahibzada Mirza Masroor Ahmad Sahib became a Moosi (that is to say that he signed up for Wasiyyat, under the plan initiated by the Promised Messiah(as)). In 1977, he devoted his life for Islam, and as directed by Hazrat Mirza Nasir Ahmad, Khalifatul Masih III, Sahibzada Mirza Masroor Ahmad Sahib, proceeded to Ghana under the Nusrat Jehan Scheme. This social, educational and economic development scheme supports a large number of hospitals and schools in West Africa. 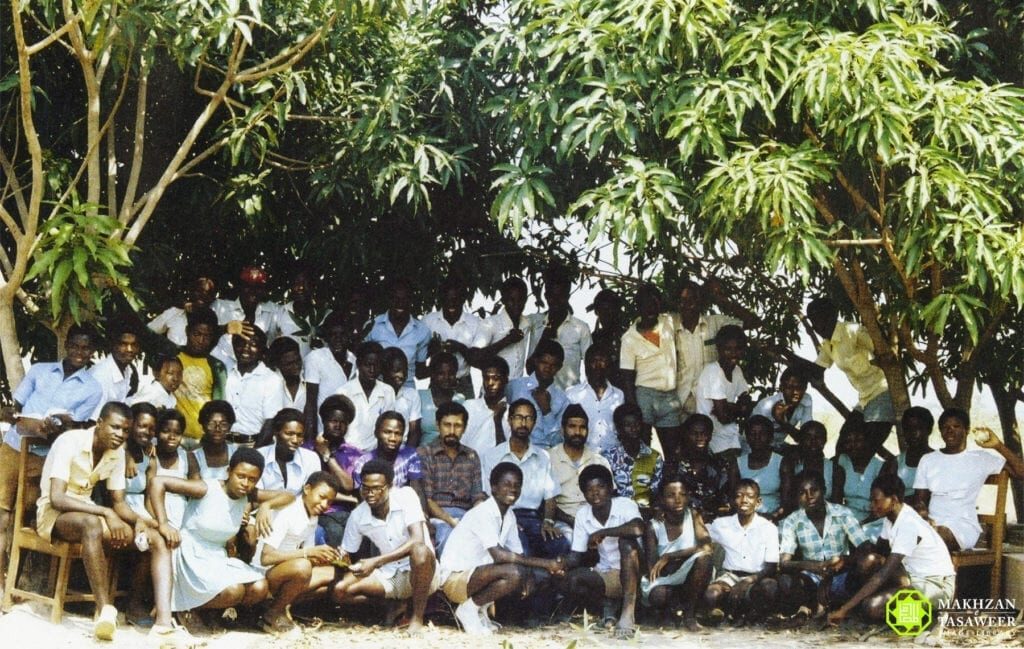 Sahibzada Mirza Masroor Ahmad Sahib was appointed as the Manager of the Ahmadiyya Agricultural Farm in Depali, in the northern region of Ghana. His experiments revealed that wheat could grow in Ghana. Successive Presidents of Ghana have commended the Ahmadiyya Muslim community for the highly successful experiments. 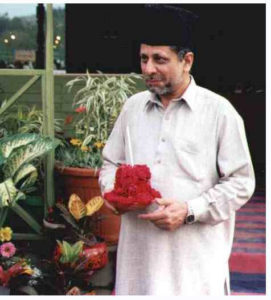 In administrative matters and a disciplined approach to work, he has no parallel. He has the unique quality of getting down to the heart of the matter and dealing with it squarely. But these characteristics were not acquired merely because of the foregoing but a thorough upbringing as set out below. Sahibzada Mirza Masroor Ahmad Sahib served in many other capacities. As Nazir A’ala, he was also serving as Nazir Dhiyafat (Hospitality) and Nazir Zira’at (Agriculture). In August 1988 he had been appointed as Sadr (President) Majlis Karpardaz Masalih Qabristan (the executive committee managing the Bahishti Maqbarah and related matters).

From 1994 to 1997, he was also Chairman Nasir Foundation. At the same time, Sahibzada Mirza Masroor Ahmad Sahib was President of Tazaeen Rabwah Committee (committee for the beautification of Rabwah). He expanded the Gulshan-e-Ahmad Nursery and his personal efforts led to reforming Rabwah to its lush green image. Sahibzada Mirza Masroor Ahmad Sahib also served as a member of Qada (Jurisprudence) Board from 1988 to 1995. 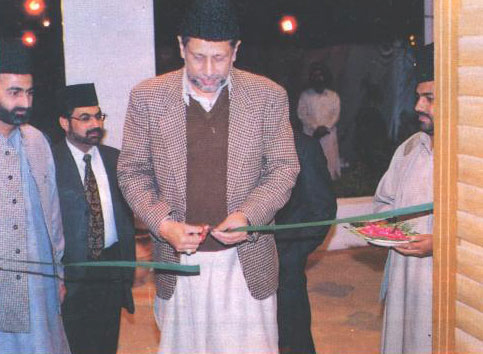 In Majlis Ansarullah Pakistan, an auxiliary organization comprising, men over 40 years of age, Sahibzada Mirza Masroor Ahmad Sahib served as the Qaid Zahant (intellectual) and Sehat-e-Jismani (Physical Health) in 1995, and Qaid Talim-ul-Qur’an (Quranic Education) from 1995 to 1997. In 1999, Sahibzada Mirza Masroor Ahmad Sahib had the additional honor of becoming a prisoner in the name of Allah, in Pakistan, when he, along with Col. Ayaz Mahmood, the General Establishment Officer, were arrested on a charge of blasphemy under the growing wave of persecution of Ahmadi Muslims in Pakistan. The son of Maulvi Manzoor Chinioti, a fanatic religious obscurantist in his own right, complained to the local police that the above two officials were responsible for defacing the verses of the Holy Qur’an. Maulvi M. Ilyas, the son of Maulvi Manzoor Chinioti, threatened the police with the un-Islamic demand that he would start a fast in protest if no action was taken. The police immediately registered cases against the two.

The above named eminent members of the Ahmadiyya Muslim community in Pakistan were arrested along with two others who went to the court to assist them in arranging ‘bail-before-arrest’. Maulvi M. Ilyas the son of Maulvi Manzoor Chinioti MPA hatched this vile and contemptible scheme. Maulvi Manzoor Chinioti MPA, himself, was the instigator and main driving force to change the name of Rabwah town. They are all members of the Majlis Tahafaze Khatme Nabuwwat, an organization that has sworn to destroy Ahmadiyya Muslim community. Mr. Rafiq Tarar, the then President of Pakistan and Raja Zafrul Haq the Minister for Religious Affairs, also belonged to the advisory council of this organization.

When the defendants arrived at the Court of Sessions in Chiniot District to have their bails validated (provisionally approved by the High Court), the Session Judge refused the bails and instead issued arrest warrants. As a result, all four were arrested and sent to jail, before any investigation was conducted as to the truthfulness of the complaints. This fabricated case was registered under PPC- 295B (defacing the verses of the Holy Qur’an), which could lead to life imprisonment. It is ominous that these arrests took place soon after the promulgation of the controversial Anti-Terrorist Act (amendment) Ordinance 1999. Newspapers in Pakistan covered the story widely in their 1st May editions. Nawa-i-Waqt Daily (a prominent Urdu language newspaper of Lahore) wrote:

‘Acting Head of the Ahmadiyya Community in Pakistan has been arrested along with his three colleagues. They are accused of having defaced the name of Chanab Nagar (formerly Rabwah) which also contained Qur’anic verses. The session judge cancelled ‘bail-before-arrest’ and issued warrants to arrest the accused. Maulvi Manzoor Chinioti, in his Friday Sermon, paid tribute to the prosecuting advocate and the Session judge for performing their duties. He promised to send the Advocate on Umra (a religious visit to the sacred places in Saudi Arabia) on his own expenses. (Unconfirmed report suggest that the Government of Saudi Arabia has offered to invite all police and court officials to perform Umra as guests of the Royal House as a reward for their services to the cause of Islam).”

Daily Jurrat (a mass circulation Urdu language newspaper of Lahore) wrote: ‘Highest members of the Ahmadiyya Muslim leadership arrested on the charge of defacing the Qur’anic verses. On the complaint of Maulvi Ilyas Chinioti, four prominent members of the Ahmadiyya Muslim Community, were arrested under PPC 295-B when the Session judge cancelled their ‘bail-before-arrest’. The accused include Mirza Masroor Ahmad, acting head of Ahmadiyya community in Pakistan, Col. (retd) Ayaz Mahmood, General President of Rabwah branch, Mohammad Akbar and a school teacher by the name of Mohammad Hussain. They had already arranged their bail from the High Court, but the Session Judge cancelled that bail and issued arrest warrants instead. This news spread like a wild fire in the city, but the Ahmadiyya leadership refused to comment on this development. Generally, the public thinks that this is a case without any foundation and a conspiracy to spread sectarian hatred.”

Sahibzada Mirza Masroor Ahmad Sahib who had been charged with blasphemy was duly imprisoned on 30th April but was released on 10th May 1999.

‘It is announced for the information of all members of the world-wide Ahmadiyya Muslim community that following the Maghrib (dusk) and Isha (night) prayers, the Majlis Intikhab Khilafat (the Electoral College) established by Hazrat Khalifatul Masih II, Musleh Maud (the Promised Reformer) (Allah be pleased with him) convened at the Fazl Mosque London today, Tuesday 22nd April 2003, under the chairmanship of Respected Chaudhry Hameed Ullah Sahib. Pursuant to the rules and regulations, each member took an oath of allegiance to Khilafat-i-Ahmadiyya. After this, they elected the most respected Sahibzada Mirza Masroor Ahmad, may his Lord keep him in peace and security, as Khalifatul Masih V. The members of the Majlis Intikhab Khilafat immediately had the honor of taking the pledge of initiation at the blessed hand of Hazrat Amirul Momineen Khalifatul Masih V, may Allah assist him with His Mighty help and Allah grant him a long life, and have also had the honour of meeing Hazrat Amirul Momineen. Alhamdollillah (All praise belongs to Allah). May Allah the Exalted in approval make this election most blessed. Amin. O our Merciful and Gracious God! O our Noble and Loving Lord, we are grateful to You that You have bestowed us with Your Grace and the Second Manifestation have once again changed our state of fear to that of peace. O our Possessor of Power and Authority and Self-Subsisting and All-Sustaining God, we bear witness that once again Your Messiah and Mahdi’s prophecy as stated in the journal Al-Wasiyyat has materialized with full glory and magnificence. All Praise belongs to Allah.

Finally, we pray that Allah strengthen his hands and grant him a long, prosperous life leading the Community. And may Allah continue to shower this community with His Blessings and make it grow by leaps and bounds. Ameen.