Address delivered by Hazrat Mirza Masroor Ahmad, Khalifatul Masih V (may Allah be his Helper), Supreme Head of the Worldwide Ahmadiyya Muslim community, delivered at the opening of the Baitul Ahad Mosque, East London on 8 May 2010. 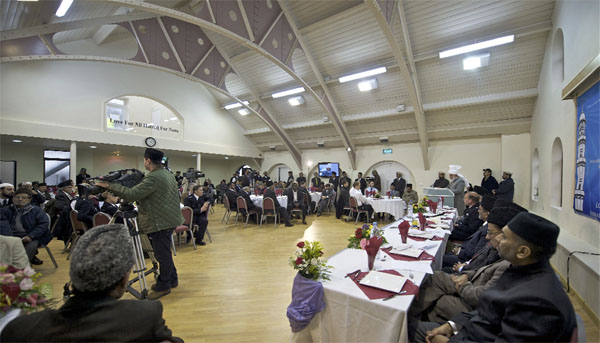 “All the distinguished guests, brothers of our Community and sisters, Assalamu ‘Alaikum Wa Rahmatullahi Wa Barakatahu (Peace and blessings of Allah be upon you)

I am very grateful to all the guests who have accepted our invitation and come here as a gesture of goodwill and thus contributed to social peace and unity. This shows your open-heartedness and inherent goodness, and it also shows the desire within you that irrespective of differences in religion, a high regard is paid to human values. If one begins to recognise human values, then much of the turmoil and disorder of the world can be eliminated.

According to our teachings, which are the teachings of the Qur’an, the sacred Book of Muslims, all the prophets sent by God, from Prophet Adam(as) until today, brought the same teachings. And that teaching is that you should develop a relationship with God and discharge the rights of mankind. Once you begin to look for these higher values, then will you deserved to be called a human being.

The Founder of the Ahmadiyya Muslim community(as), whom we believe to be the Promised Messiah and Mahdi, has also drawn particular attention to this. He said that he had been sent to remove the darkness that had begun to develop in the relationship between God and His Creation, and replace it with love and sincerity, and also to set the basis for reconciliation by manifesting the Truth and thus bring an end to religious wars.

The Ahmadiyya Muslim community is marching forward with this mission so as to cause people to recognise God, their Creator. We can recognise God through our loyalty and sincerity towards Him. It is in this way that the beautiful teaching of Islam – of peace, harmony and reconciliation – can be displayed. And by causing this message to spread, religious hatred is removed.

In order to establish a bond with God Almighty, it is necessary to worship Him. When many people come together for worship it has a great impact. It pleases God Almighty when a group of people collectively display their love for Him and join together as one, bowing down before Him. This is why we see places of worship in all faiths.

A mosque is a place of worship for Muslims and it is built for worshipping God five times daily – and this is, and should be, its true purpose. Apart from this there is no other purpose. A mosque means a place where people prostrate; where they show extreme humility and humbleness in total submission and obedience. By placing your forehead on the ground, it demonstrates total humility. Whenever the real concept of a mosque emerges in the mind of a true Muslim, it will always manifest itself as a place of worship of total obedience.

Who are truly obedient towards Allah? The Holy Qur’an mentions such people in a number of verses. The sum total of their definition is that the obedient are those who discharge the rights of Allah and His Creation.

In compliance with the command of Allah, when a person discharges the rights owed to God and searches for different ways to please Him, it is not possible that such a person will usurp the rights of God’s Creation. The Founder of the Ahmadiyya Muslim community has taught us that if you want the world to become aware of the beautiful teachings of Islam, then you should build mosques. And when the rights of the mosque are discharged, then the people near the mosque will become aware of the beautiful teaching of Islam.

If a mosque is a dangerous place where the lava of hatred is always on the boil, where there is an absence of tolerance and teachings of extremism are prevalent, then, can such a mosque be a symbol of the true and beautiful teaching of Islam? Certainly not! The concept of mosques emerging in the world today is entirely incorrect concept.

In Switzerland, a law has been enacted to ban minarets, but as I have explained at many places, the minarets of mosques are in reality symbols of light and knowledge. Mosques are the centres of discharging the rights of Allah the Almighty and His Creation – and that is the way it ought to be.

If a particular group has committed something wrong in a mosque, this should not be unnecessarily exploited so that Muslims across the board are wrongly labelled, and therefore it would be prudent not to hatch schemes against all mosques.

I asked a few days ago that even if we suppose that conspiracies and plans to destroy the peace of society are drawn up in a particular mosque, then by preventing the building of minarets, what guarantee is there that, as a result, only calls for peace in society will be heard from such mosques?

If, in any place of worship, or any religion, efforts are made to destroy social peace, then it is the task of the government to implement legal measures against this; but to generalise the situation is nowhere near justice. It should always be remembered that peace in society can only be established by fulfilling the requirements of justice. A mosque or any other place of worship is not responsible for destroying the peace of a society; nor for that matter are people belonging to a particular faith. In fact, the factors that destroy peace in society are: the malice within one’s heart, not tolerating or showing respect to the faith of one another, material attractions and not fulfilling the requirements of justice.

In today’s cosmopolitan world, there are people from different faiths and nationalities in every country; and particularly in this area of London, people from different communities and religions are living side by side. We should make every effort to fulfil the standards and requirements of justice; we should respect and hold each other in high regard, so that in this area, in this town, in this country and in this world we can play a positive role in establishing peace.

How does the Holy Qur’an admonish us to fulfil the rights of justice? It states in Chapter 5, Verse 9:

…Let not a people’s enmity incite you to act otherwise than with justice. Be always just, that is nearer to righteousness. And fear Allah. Surely, Allah is aware of what you do.

Once these standards of justice are established it will guarantee peace in society. So, this is our teaching. We, Ahmadi Muslims, do not hold enmity against anyone. If anyone bears animosity towards us then, out of human sympathy and love for humanity, we pray for him that Allah guides him and removes the hatred from his heart.

It is very important to understand the truth of the matter and to fulfil the requirements of justice. Therefore, we must adopt this important and fundamental principle so that we are not hasty in jumping to a conclusion by looking at only one side of the picture. In fact, we should delve deep in search of the truth. If we object to the conduct of a few who go to any one particular mosque then, as I have said, this should not be generalised, but the specific case should be investigated. If we follow this principle then it will prove to be the means for securing the peace of society.

For the benefit of non-Muslims present here today, I should also say that the Holy Qur’an has made mosques the guarantor for the peace and security of all other places of worship.

When we look at Islamic history, we can clearly observe the enmity by the non-believers of Makkah against Islam. The barbaric cruelty meted against the Holy Prophet, peace and blessings of Allah be upon him, and his Companions was so horrific that when ones hears of it, it makes one’s hairs stand on end.

Continuously, for thirteen long years, the Muslims put up with this cruelty, and then according to the command of God, the Holy Prophet(saw) migrated to Madinah. But even there, the non-believers manifested their barbaric cruelty. At that time the Muslims were permitted to fight, but not to defend Islam alone, but in defence of all religions. God Almighty says in the Holy Qur’an, in Chapter 22, verses 40-41:

Permission to fight is given to those against whom war is made, because they have been wronged – and Allah indeed has power to help them. Those who have been driven out from their homes unjustly only because they said, ‘Our Lord is Allah’. And if Allah did not repel some men by means of others, there would surely have been pulled down cloisters and churches and synagogues and mosques, wherein the name of Allah is oft commemorated. And Allah will surely help one who helps Him. Allah is indeed Powerful, Mighty.

Therefore, by defending Islam, Allah the Almighty guaranteed the freedom of all other religions. In other words, we can say that it is the duty of those who protect mosques that they must protect other places of worship also.

Thus, where a true worshipper, who goes to the mosque to worship, fulfils the rights of Allah, he also discharges the rights of God’s Creation without discrimination of faith or nation.

With the establishment of this mosque, we, Ahmadis in this area, pledge that this mosque is being opened for the worship of the One and Omnipotent God and for the followers of all faiths. Every Ahmadi who comes to this mosque will stand for the dignity and respect of the places of worship of all religions. And this mutual respect and dignity is the guarantor for securing the peace of society.

Today, the world is passing through restlessness and unease and this demands that by creating an atmosphere of love and affection, we remove this anxiety and fear; that we convey a message of love and peace to those around; that we learn to live with ever greater harmony and in a way better than before; and that we recognise the values of humanity – this is something that is badly needed in the world today.

It is my prayer that Allah enables us to live in peace and with love and affection in the society. Wherever signs of hatred exist, they should be removed, and the fear of the One God should develop within the heart and that you should become His worshippers. I pray that we do not cause harm in the name of religion or in pursuit of worldly greeds – Amin.

Finally, from the depth of my heart, I would like to thank all the guests who have spared us their valuable time for this function – thank you.”