Opening of the Baitul Futuh Mosque, in Morden, London

The following is an address by Hazrat Mirza Masroor Ahmad, Khalifatul Masih V, delivered on Saturday 11th October 2003 at the reception on the opening of the Baitul Futuh Mosque, in Morden, London, one of Europe’s largest Mosques. 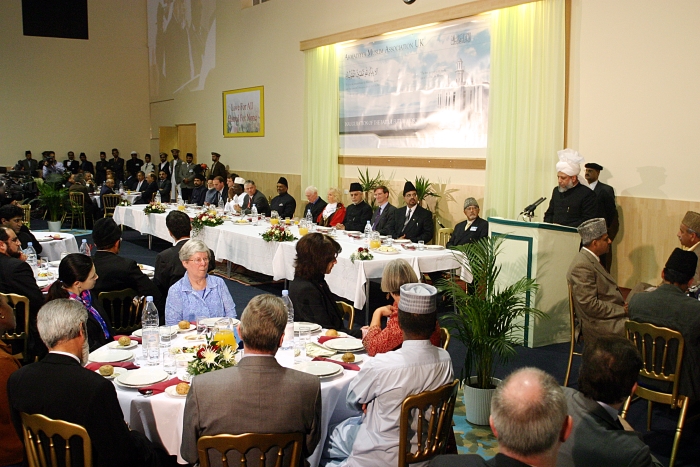 After affirmation of the unity of God and Muhammad(sa) being a messenger from Allah, seeking refuge from Satan and beginning in the name of Allah, Hazrat Mirza Masroor Ahmad said:

I just want to say a few brief words. Firstly, thank you to all our honourable guests who accepted our invitation and came here this evening to attend the opening of the Baitul Futuh Mosque. Thank you also for your kind best wishes.

Islam teaches us to always be mindful towards God Who is our Creator and to always keep His memory fresh in our hearts and to deal with His creation with love, affection, harmony and tolerance.

This is the sum total of the teaching given to us by Muhammad the Holy Prophet of Islam(sa). So, if this is the teaching of this religion, how can slogans of hatred be shouted from the rooftops of its mosques that are supposed to be the places of worship for its followers? A true Muslim can never raise his voice in hatred against his fellow citizens, nor for that matter against the ruling authority or government of the time.

It is the responsibility of a true Muslim that he should remain loyal and fully abide by the laws of the land of which he is a subject.

‘A true Muslim who is aware of the teachings of his faith, will always remain sincere and obedient to the government under whose benign shadow he lives his life in peace. Religious difference does not prevent him from true obedience and compliance.’ (Tohfa Qaisariya p.29)

This is the beautiful teaching of Islam which the Ahmadiyya community practises. Those who have known us or have been in touch with us certainly know that this is true. They can confirm that, as a community, Ahmadi Muslims have always stayed away from all evil acts and crimes or anything in breach of any law or which causes any harm or loss to God’s creation.

The Ahmadiyya Muslim community is always ready to serve humanity. In connection with this objective, we have been serving humanity, irrespective of religious difference, through hospitals and schools in the poor countries of Africa.

The Founder of the Ahmadiyya community had accepted a pledge from those who joined his community that if they believed that God Almighty had sent him so that he should show them again the true image of Islam, and introduce again its beautiful teachings, then they would also have to accept, for the sake of God Almighty, that they would, to the best of their abilities and resources, behave graciously and kindly towards God’s creation. They would have to serve the creation of God. When a person meets another person in this spirit, it results only in love and affection and peace. There is no trace of hatred. 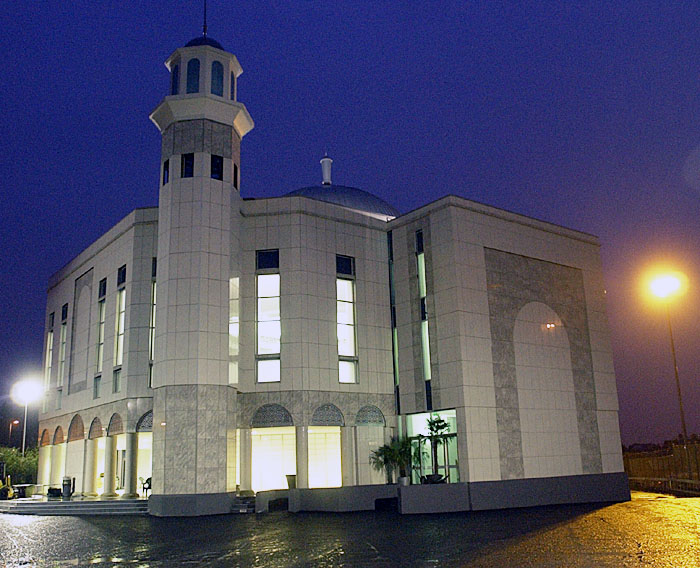 As I said earlier, man has been created for only two purposes and they are that man should worship the One and Only God and to inter-act kindly with God’s creation. To achieve these objectives, mosques are built. In view of this objective, the Ahmadiyya Muslim community is pressed into the erection of mosques in all corners of the world and just as with those mosques, this mosque of the Ahmadiyya community, is a symbol of peace.

I also urge you, that irrespective of your faith, creed, race or nationality, you should create in your own areas, an atmosphere of peace and help the suffering mankind. If we fail to act, there appears to be nothing to arrest the destruction towards which mankind is rapidly heading. This destruction would be far worse than the destruction caused by the Second World War.

Remember, that man cannot know another man till he begins to recognise his God, and, in order to recognise God, you have to pay greater attention to worshipping Him. This seems to be a difficult task in this age, but we will have to turn to Him for our own survival.

I close by quoting you an excerpt from the writings of the Founder of the community. He says:

‘The mission for which I have been appointed is to remove that growing gap in the relationship between God and His creation and replace it once again with the relationship of love and sincerity; and by allowing the truth to manifest itself, cause religious wars and discord to end and thus lay the foundations for peace; and disclose such religious truths as had become hidden from the eyes of the world; and display an example of that spirituality that had become buried under the darkness of the pleasures of the self; and by my condition rather than by word of mouth, I should tell and explain God’s powers that enter man and re-emerge as meditation or prayer’ (Lecture Lahore, p.47)

Allah help us in understanding our responsibilities, Amen. 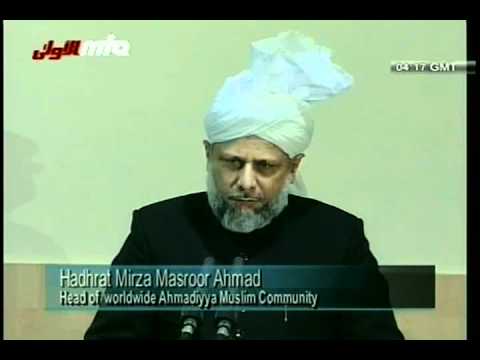 100 Years of the Majlis-e-Shura – Understanding its Real Purpose
Islam’s Principles for Establishing True Peace
Humanity First – Wiping Away the Tears of the Distressed
Safeguarding Yourself From the Toxic Glamour of the World
The Immense Responsibilities of Members of Khuddamul Ahmadiyya
Go to Top
Start Here
Research
Contact Us
Follow Us
Copyright © 2023 Ahmadiyya Muslim Community. All rights reserved.
Privacy Policy | Use of Cookies | Terms of Service | Sitemap
Start Here