Address at Inauguration of Baitun Naseer Mosque in Augsburg, Germany

On 11th April 2017, the Supreme Head of the Ahmadiyya Muslim Community, His Holiness, Hazrat Mirza Masroor Ahmad(aba) inaugurated the Baitun Naseer Mosque in Augsburg, Germany. A special reception was held in which more than 130 dignitaries and guests attended. The highlight of the event was the keynote address delivered by the Head of the Ahmadiyya Community. His Holiness mentioned the purpose of constructing mosques and highlighted the important Islamic teaching of fulfilling the rights of mankind. His Holiness explained with reference to the founder of Islam – the Holy Prophet(sa) – that one of the major responsibilities of a Muslim is to fulfil their dues to God Almighty, but equally important is that one should serve God’s creation and eliminate the difficulties faced by the majority of the people in this world. His Holiness then highlighted the huge humanitarian work carried out by the community in some of the most remote parts of Africa under the charity organisation Humanity First.


This speech has been translated from the Urdu, and The Review of Religions takes responsibility for all errors in translation. 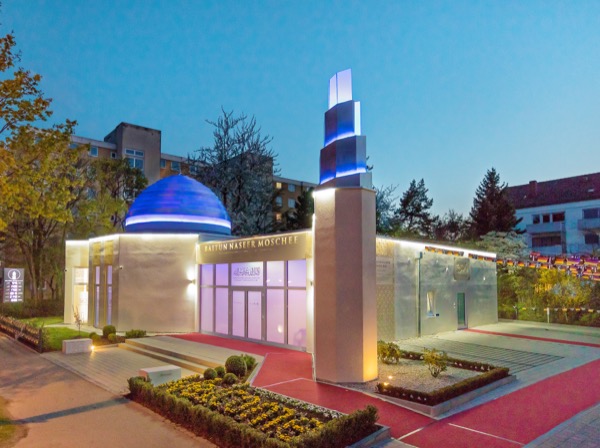 ‘All respected guests – Assalamo Alaikum Wa Rahmatullahe Wa Barkaatohu (may the peace and blessings of Allah be upon you). May Allah the Almighty always bestow you with peace and security. As one of the esteemed guests just said in his remarks, we have been commanded, in the portion of the Holy Qur’an that has just been recited, to perform virtuous deeds in parallel with offering prayers. True piety involves serving humanity, taking care of the impoverished, looking after orphans and doing other similar good deeds. Thus, when we construct a mosque, we do it with the hope and expectation that we will act upon the aforementioned teachings. Where we aim to fill mosques for the purpose of worship, there we also intend to conduct the task of serving humanity.

This is the fundamental teaching that an Ahmadi Muslim always keeps in view. In poor countries of the world we serve humanity on this basis. Whilst we construct mosques on the one hand, we build schools and hospitals on the other. In fact, we have built model villages in remote areas of poor countries, to provide water and electricity where there had been no facilities and where the locals could never previously imagine having access to them. 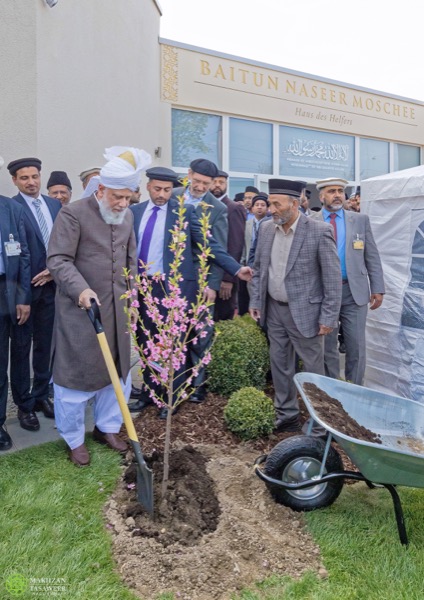 His Holiness, Hazrat Mirza Masroor Ahmad(aba), plants a tree at Baitun Naseer Mosque in Augsburg, Germany. In his keynote address, he stated that in addition to planting trees to beautify the atmosphere, the Ahmadiyya Muslim Community also plants trees of love and affection.

I have always said, by way of example, that here in the developed countries we do not truly value water, in spite of the fact that there are signs in hotels and other places asking people to conserve water and utilise it appropriately. However, we get a real sense of the value of water when we visit the far-off regions of Africa, where village children are unable to go to school, to attain an education, because of poverty. And not only are they deprived of an education, but they also have to walk for miles with buckets on their heads to fetch filthy water from ponds so that at home they can use this water for cooking and drinking. When you then install water pumps or hand pumps in these areas, and provide clean drinking water to people, their excitement is a sight to behold. They are overjoyed and their happiness knows no bounds. Here in the West, in Europe and in Britain as well, people win lotteries and sometimes they win millions of dollars or pounds or Euros, and are ecstatic and jump with joy as a result. However, if you could understand the feelings of destitute children who are able to get clean drinking water at their doorsteps, you would realise that for them, this is equivalent to winning millions of Euros in a lottery. In short these are the feelings in our hearts and this is why, where we invite people towards Allah, there we will also carry out the work of serving all humanity. 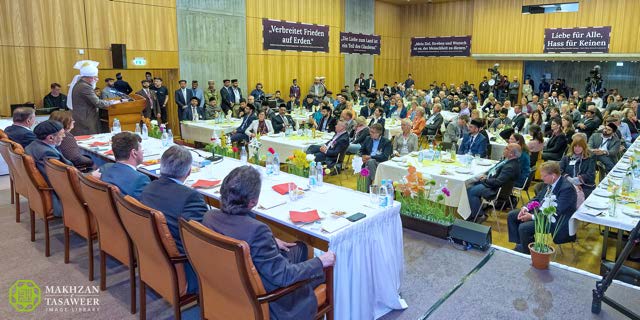 The audience listens as His Holiness delivers his keynote address. Over 130 dignitaries attended the inauguration of the mosque, including the mayor of Augsburg and several Members of Parliament. His Holiness assured the guests that members of the Ahmadiyya Community will strive to fulfil the rights of their neighbours.

There is one caliphate that has become infamous in the world, called Daesh. They have spread disorder and chaos in the world. They commit terrorism not only in the West, but even in their own countries such as in Iraq, Syria and other Muslim nations. Thousands and thousands of people have been massacred for no reason whatsoever. This is not a caliphate, because it does not operate upon the true teachings of Islam. Indeed, it cannot be a caliphate at all, since it was not formed in the manner prophesied by the Founder of Islam(sa). The true caliphate was destined to appear after the advent of the divinely commissioned Promised Messiah(as), and would continue the mission that the Promised Messiah(as) had been sent to the world for by God the Almighty: to connect mankind with God and for mankind to fulfil the rights of one another. And so this is the fundamental difference between the true caliphate and the false caliphate. We should always remember this.  Thus a non-Muslim should have no reason to fear or hold any misgivings about the true teachings of Islam. His Holiness leads the audience in silent prayer at the end of the inaugural event.

The mayor of this area mentioned that they planted a tree here in the mosque. Trees are planted to beautify the surroundings, to grow fruit and also to make the environment greener and more pleasant. These days there is a lot of emphasis on climate change and pollution, therefore a lot of plantation is taking place. However, aside from physical trees, we endeavour to plant trees of love. We wish to plant trees that not only beautify the area, keep the atmosphere clean and bear fruit, but trees that will also bear fruits of love. From us, our neighbours should receive only love and affection and the fulfilment of their rights. Thus, a tree has a physical identity, but this tree also has a spiritual identity for which we keep in mind and which every Ahmadi should keep in mind.

The honourable MP, Mrs Kamm, if I am pronouncing her name correctly, also spoke well on this matter and I thank her for that. She said that ‘people live here with mutual cooperation and understanding. After the construction of this mosque, this atmosphere of compassion and understanding will only increase, God Willing.’

Different religions exist in the world today. In fact, we as Muslims believe that God Almighty sent messengers to every nation, who carried His message to them. And every nation’s messenger came with the message to worship God Almighty and to spread virtuous deeds. And this is the very essence of the teachings of Islam and we believe the Holy Qur’an has expanded on this in great detail. People assume that the Qur’an contains teachings about jihad and terrorism, and this is the reason why Muslims become terrorists. But actually, the teachings of the Qur’an consist mainly of peace, love and harmony. And where there is some discussion of jihad, one should remember that jihad comes with certain conditions. One thing that needs to be understood is that the real meaning of jihad is striving to end evil. This is the true meaning of jihad and this is what the Ahmadiyya Community are doing.

There was a time when the Muslims were persecuted. We believe that the Holy Prophet(sa) never committed any injustices against anyone, but that only when others had committed atrocities and injustices against him, God Almighty commanded the Holy Prophet(sa) to retaliate and he was given permission to reply to their actions.  And even this permission was granted with certain conditions, as it is written in the Qur’an that these cruel people wanted to eradicate not just Islam, but religion altogether. And the Qur’an clearly states, ‘If you do not stop them, then no church will be left, no synagogue will be left, no temple will be left and no mosque will be left, wherein the name of Allah is oft commemorated.’ This has been explained in the Qur’an in detail. Thus, it is not possible that a true Muslim, who attends the mosque, could commit an act against any other religion.

And yes, it is the case that when the Muslims were attacked, they retaliated and consequently wars were fought. This is why, on returning from one of these battles, the Holy Prophet(sa) stated: ‘We are returning from a lesser jihad – which was forced upon us – to a greater jihad, where we will spread the teachings of love and harmony, the teachings of the Qur’an and where we will live with mutual love and respect.’

So these are the teachings of the true Islam which the Ahmadiyya Community practises and it is this Islam that every Muslim needs to accept. Indeed,  the founder of Islam, the Holy Prophet(sa) told the Muslims that in the future, when a man would appear who would explain the true teachings of Islam, they were to accept him. Therefore, the motto of the Ahmadiyya Muslim Community ‘Love for All, Hatred for None’ is not a new teaching; it is in fact part of the fundamental teachings of Islam that are found in the Holy Qur’an. The Muslim clerics distort these teachings and present them in a warped manner to achieve their own vested interests. Muslims do not take the opportunity to find out for themselves what the true teachings of Islam are and understand that it is the corrupt leadership that has led them on to this path. True Islamic leadership is the one that appeared in accordance with the prophecy of the Founder of Islam(sa), and now, through the effort of the Ahmadiyya Community it is advancing further. 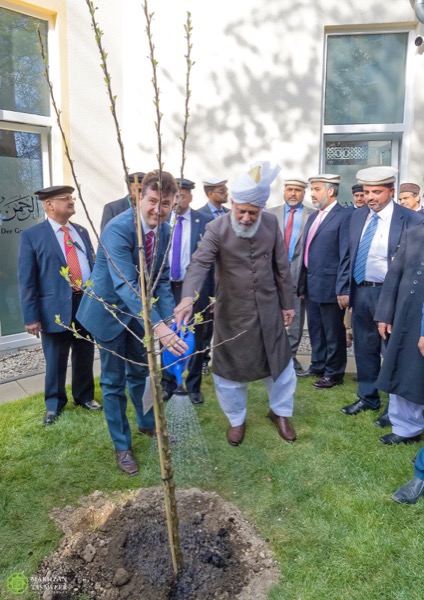 These are the fundamental teachings of Islam and the reason for building the mosque. Therefore, if our neighbours previously had any reservations, they should now have been resolved as the purpose of a mosque, aside from the worship of God Almighty, is to ensure the rights of others are fulfilled and to spread the message of peace and love. The very name of Islam means peace and serenity. We firmly believe – irrespective of the fact that another person belongs to a different faith or no faith at all – that our God is the Lord of All the Worlds, which means he is the Lord of all people. He grants every provision to every person who believes in a faith, whilst at the same time He also grants every provision to those who do not believe in any religion. Since it is our belief that everyone will be held accountable after they pass from this world, therefore we do not have the right to pass any judgement about anyone. It is, however, our duty to spread the true message, to spread a message of love and harmony and to invite people to come towards God Almighty. This is what we are doing and God willing, what we shall continue to do.

I hope that having built this mosque, the Ahmadis residing here will work even harder in this regard, and that whilst attending the mosque and fulfilling their dues of worship, they will also fulfil the rights owed to their neighbours, their friends and associates. I hope they will greet you all with more love and affection than before and I am certain that this will be the case. May Allah enable them to act in this manner.