Pray for Peace and Serenity

On 18th April 2017, the Supreme Head of the Ahmadiyya Muslim Community, His Holiness, Hazrat Mirza Masroor Ahmad(aba) laid the foundation stone for the first Ahmadiyya Muslim Mosque in the German town of Raunheim. In his keynote address, His Holiness spoke about the true objective of mosques and explained how Islam promoted religious freedom and democracy.This speech has been translated from the Urdu, and The Review of Religions takes responsibility for all errors in translation. 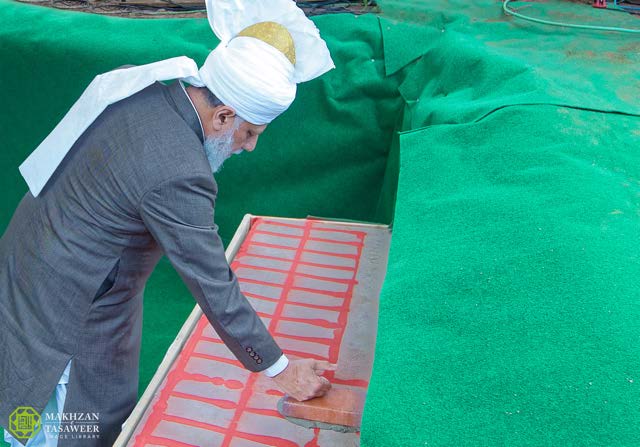 ‘To all our distinguished guests, Assalamo Alaikum Wa Rahmatullahe Wa Barkaatohu (may the peace and blessings of Allah be upon you). May Allah the Almighty always grant you all peace and serenity, especially now, given the current state of world affairs, in which there is danger not only from [extreme] religious organisations – or, as some say, Muslim terrorist organisations – but also from the new development in the world of an increasing enmity between governments and states. Consequently, there are growing fears in Europe, Korea, the Far East and even in the US that war is imminent. Therefore, we all must make an effort to establish peace and also pray for it. This is why, at the very outset, I gave you greetings of peace and harmony, so that every person who loves humanity should understand this and strive to spread the message of peace and tranquillity. Politicians should convince their governments that instead of waging war, they should work to establish peace, and work more towards achieving reconciliation and finding solutions.

The name of Islam stands for peace and the very name itself means peace and tranquillity. Unfortunately, some groups and extremist organisations have tarnished the name of Islam. Because of this, even in Muslim countries, there is bloodshed and conflicts between governments and their citizens, as well as fighting between extremist groups. Similarly, some terrorist groups in the western world have also carried out attacks, including some instances that have occurred in Germany, France and Belgium, which has led to Islam being portrayed in a negative light in the non-Muslim world. Consequently, people are unaware of the true teachings of Islam. Perhaps some of you here may also be among those who believe that Islam is a religion that promotes extremism and violence. As a result of this, some people may have qualms or worries when a mosque is under construction. However, I am pleased that all of the speakers here have mentioned that Ahmadi Muslims not only have a positive impact on the society but also promote love, affection, peace and brotherhood and do their part to integrate within the community.

Guests and dignitaries listen to His Holiness’ keynote address at the foundation stone laying ceremony at Raunheim, Germany. Over 130 dignitaries attended the event, which marked the construction of the first Ahmadiyya Muslim mosque in the city.

Thus, this is the true Islam, and after the construction of this mosque, these good deeds will be expanded and increased in an even better manner. Only then will it be understood that minarets do not resonate with chants of hatred; rather, only love and adoration will come from them, along with chants of devotion and affection.

In the Qur’an, it is mentioned – and Ameer Sahib [National President of the Ahmadiyya Muslim Community in Germany] also mentioned this in his speech – that when the Prophet Abraham(as) was raising the foundations of the Ka’bah alongside Prophet Ismael(as) (and which is the model for our mosques in which we worship one God), even they prayed for the peace and serenity of the area. Therefore, if our mosques are constructed on the model established by Prophet Abraham(as) and Prophet Ismael(as) – and they should be constructed in this manner – then our mosques should also be a source of peace and tranquillity, and this is the purpose of their construction. 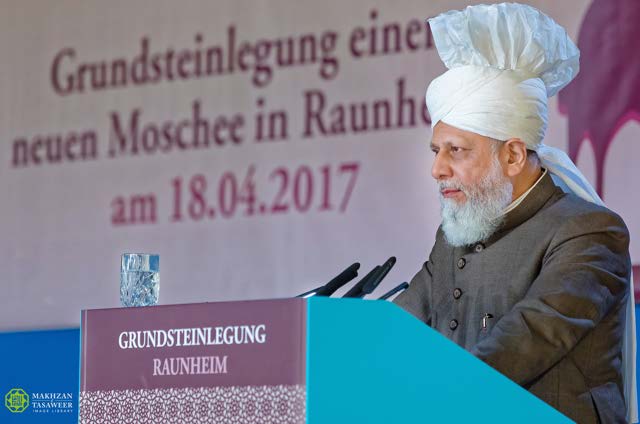 His Holiness delivers the keynote address, in which he praised Germany’s granting of religious freedom to all people, and warned that the world was facing an impending crisis as governments and nations increase in hostility to one another.

I am also grateful for the sentiments of the honourable mayor. He spoke about the rights of neighbours by saying that Ahmadis always fulfil the rights of their neighbours and always facilitate mutual understanding. In the teachings of Islam, the rights due to a neighbour are so extensive and significant, that the founder of Islam, the Holy Prophet(sa) stated: ‘God Almighty emphasised the rights of neighbours to such an extent,’ (and this is also mentioned in detail in the Qur’an) ‘that at one point I thought they would also receive a share in the inheritance.’ This is the significance of the rights owed to neighbours as mentioned by Islam. The circle of neighbours is so vast that it not only extends to those living next to you, but also to all those living in your vicinity, who are also considered to be neighbours; those travelling with you are considered neighbours, your co-workers are considered neighbours, and so the circle expands even further. In fact, it is written that your neighbours range up to forty houses. If one were to consider forty houses in all directions, this would mean that each Ahmadi has 160 neighbours. In other words, if this is placed into context then it means that virtually the entire town becomes the neighbour of an Ahmadi. And the same will be true when our mosque is constructed. When the mosque is complete, it will be the responsibility of those coming to the mosque to fulfil the rights of their neighbours. The mosque should not become a source of annoyance; rather, those living here should be able to say that the reservations they once had about traffic implications or difficulties due to other activities, have proven to be false, and that furthermore, they have benefitted greatly through the construction of this mosque, and that Ahmadis are ensuring the rights of their neighbours more than ever before.

Likewise, obeying the law is an extremely important quality. If any Muslim does not abide by the law of the land, then he has no right to live in that country. In terms of obeying the law of the land and love for one’s country, the founder of Islam, the Holy Prophet(sa) has considered it so important that he has declared it to be part of one’s faith. Laws are established to safeguard citizens, to make life easier for them and to prevent any injustice to them.

Thus, if the teachings of Islam state that one must spread peace and tranquillity as well as end injustice, then it is not possible for an Ahmadi Muslim, or any true Muslim to break the law. Every sincere Muslim will always be a law-abiding citizen, and should always remain so. However, if they are not, then they have no association with the Islamic faith. Therefore, in this regard if anyone has any reservation or harbours any doubts, they should remove these misconceptions. Islamic teaching does not permit for any sort of disturbances or for the law to be broken. If some individuals carry out such acts in the name of Islam, they do so to tarnish Islam’s name, because Islamic teachings completely and totally forbid such acts.

In addition, I would like to thank the honourable MP for her righteous sentiments and also for mentioning freedom of religion. In this country we enjoy freedom of religion and we are extremely grateful to the people and the government for this. It is because of this freedom of religion that, despite the fact that the majority of the local population is non-Muslim, and is Christian or belong to some other faith, they have still allowed Muslims – who are few in number – to construct a mosque here. For this I am grateful to the residents, the neighbours and the local council for allowing us to build a mosque in this area. God Willing, when this mosque is completed it will become evident to everyone that by granting permission to construct a mosque here, they fulfilled the rights of those people who themselves strive to carry out their obligations to their neighbours and fulfil their rights in the best manner.

It is our firm belief that God Almighty sent a prophet to every nation. To every nation, He sent His chosen ones to reform the people, and to teach them their faith as well as manners and mores. 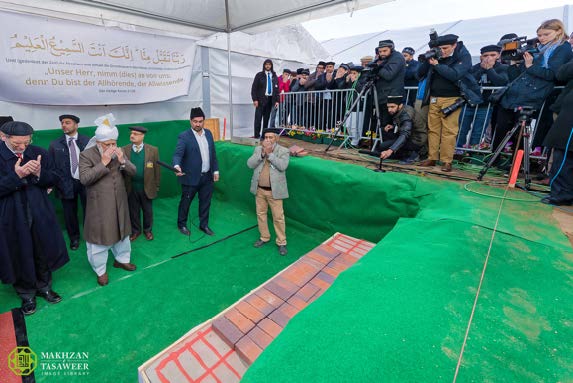 His Holiness leads the silent prayer after the foundation laying ceremony.

Therefore, every religion comes from God Almighty. And we affirm that every prophet sent from God Almighty, from the time of creation through the present, was truthful and was sent by God to spread His message. For this reason, we cannot even imagine usurping the rights of anyone, let alone harming them in any way. In fact, after a lengthy persecution, when the founder of Islam(sa) was granted the permission to wage war, it was granted on the condition – which is mentioned in the Holy Qur’an – that ‘those people who wish to eliminate you are in fact attempting to wipe out religion all together.’ And it is essential that those who want to eradicate religion be stopped, because if they are not stopped through war and through weapons, then no church will be left, no synagogue will be left, no temple and no mosque will be left standing, because these people are opposed to all religion.

Islam and the Holy Qur’an have declared that freedom of religion is a fundamental part of its teachings. I would therefore commend you in this regard, that in these countries you have understood better the importance of allowing freedom of religion than some other Muslim countries. It is because of this that Ahmadis, who are deprived of religious freedom in Pakistan, settled here and now can freely worship and carry on their activities. And is it is this religious freedom that also allows them to build mosques. For this I am very grateful to you all.

The subject of democracy was mentioned earlier, and being a true democratic country led you to understand the importance of permitting freedom of religion. Islam also promotes a free and fair democracy. In fact, the Holy Qur’an states that ‘when choosing your leaders and advisors or when electing government officials, you should choose those individuals who will do justice to the trust bestowed to them.’ Only those politicians should come to power that will do justice to their trust, which is to work for the betterment of the people and the country.

Islam teaches that everyone should exercise their right to vote. Instead of looking at party affiliation, one should always look to elect people who will not only fulfil the rights of the citizens, but will also work towards the progress of the country.

So with this teaching, we spread our message throughout the world, while also striving to act upon it ourselves. It is the responsibility of every Ahmadi that where they are grateful to the people for this religious freedom, they should also obey the law to such an extent that they become a model and example for others. Furthermore, they should elect those leaders who can provide an outstanding service to their country.

I hope that when the construction of this mosque is completed the Ahmadis living here will be able to gather together and carry out their programs with ease. Alongside their worship they will be able to perform other activities, but also, [I hope] they will become pivotal in helping the progress of their nation and country.