The primary objective for everyone should be attaining Taqwa 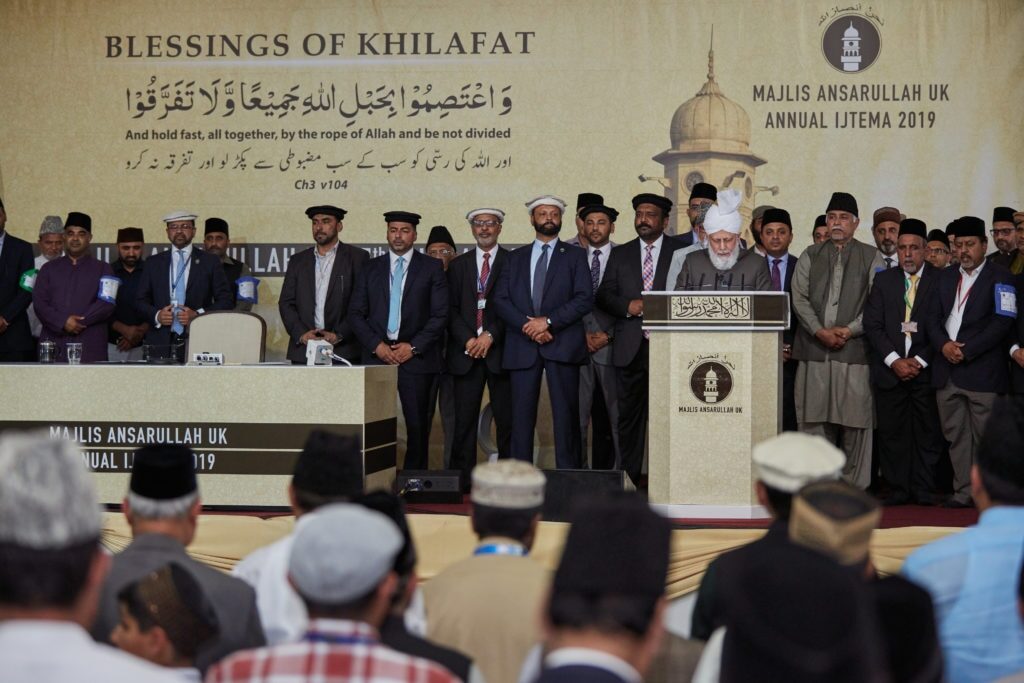 After reciting Tashahud, Ta‘awuz and Surah al-Fatihah, Hazrat Amirul Momineen(aa) said that by the grace of Allah, along with the success of the Jamaat in terms of numbers, Majlis Ansarullah is also expanding. However, despite this success, the real analysis Majlis Ansarullah should do is to ask themselves whether they are following the teachings and desires of the Promised Messiah(as). 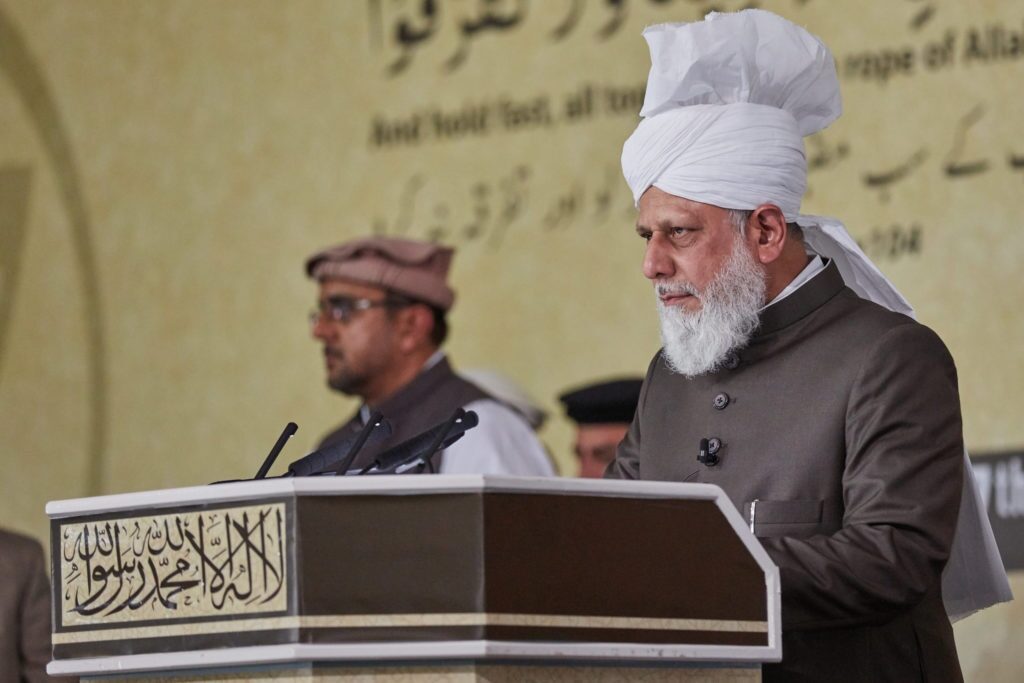 Despite these constant reminders, Huzoor(aa) questioned whether even 40% of people follow the instructions of the Promised Messiah(as) that are constantly quoted. Huzoor(aa) said that even office-bearers are not properly following these instructions, especially the commandment of Salat.

It is our examples that the next generation and the youth will follow, Huzoor(aa) said. Therefore, it is essential that every Nasir and every office-bearer self-reflects and sees where he stands.

The Promised Messiah(as) said that once, a Muslim asked a Jew to accept Islam. The Muslim himself was not following the teachings of Islam and acted immorally. Therefore, the Jew told him to first look at his own state before inviting him to Islam. The Jew told the Muslim that he had a child whose name was Khalid, meaning the one who lives a long time, however the child passed away the very next day after birth. Thus, the Jew said, mere names mean nothing – practical examples are needed.

We claim that we will spread Islam in the world, but what efforts and examples are we showing to prove this?

The Promised Messiah(as) said to first reach righteousness and seek the protection of Allah. He said to develop such faith and purity that one delevops a spiritual awe within themselves. The Promised Messiah(as) also highlighted that those who are Muslim and act immorally defame the name of Islam. They not only cause harm to themselves but also to the name of Islam. It is vital that we do not give others a chance to complain and raise allegations against Islam.

Huzoor(aa) said that the Holy Quran and its commentary are essential for purity and closeness to Allah. The Promised Messiah(as) said that without action, mere words and desires mean nothing. If we desire to spread the name of Islam we all need to make our actions and words the same.

Then, the Promised Mesiah(as) said that he gave these exhortations so that those who have a connection with him may heed and enhance in purity while bringing others towards the light of truth as well.

The Holy Quran testifies that help will be with those who follow Prophet Jesus(as), and this same promise was also given to the Promised Messiah(as). Therefore, can it be that those who want to be recipients of this promise immerse themselves in immoral deeds and not follow the true teachings of Islam? Certainly not. Only those people will be recipients of this promise who gain closeness to Allah and resist all evil.

We must develop a special connection with Allah. It cannot be that we miss our prayers or due to our work, we shun them.

The Promised Messiah(as) said, “The path of Taqwa [righteousness] should be followed; Taqwa can be said to be the summary of Shariah.”

How can man desire to achieve righteousness if he misses his prayers? If he does so, he cannot complain if he does not attain closeness to Allah.

The Holy Quran states that those who achieve righteousness are such that they constantly uphold their prayers and in the end, attain closeness or become close to Allah and reach true success.

The Promised Messiah(as) stated that our Jamaat should be more sorrowful and worrisome over whether they have righteousness or not. This worry should overpower all worldly worries and sorrows.

Huzoor(aa) quoted the Promised Messiah(as) who said that he did not desire for his Jamaat to think of others as lowly or of high rank. Some people show great respect to people with worldly awe, however true greatness is in listening to the poor and weak with humility. According to Allah, the best person is he who is righteous.

True intellect and insight cannot be achieved without the succour of Allah and righteousness. The Promised Messiah(as) greatly stressed to deeply ponder over the Holy Quran, as a result of which, one will conclude that Allah did not create this world for no reason.

The Promised Messiah(as) exhorted his Jamaat to think, use their understanding and ponder over what is needed – it is true Taqwa that is needed. One should become like a fertile land that soaks in water and flourishes. In the same manner, one should soak heavenly light and become pure. Until there is no striving, one cannot gain closeness to Allah.

The Promised Messiah(as) said that 60,000,000 books were published against Islam and the number of Muslims present in India at the time was also 60,000,000. This was the intensity of those attacking Islam. Therefore, a need to transform oneself is essential to battle these constant onslaughts against Islam.

Today, it is not only books that are attacking Islam, rather a plethora of avenues have opened that seek to attack Islam.

The Promised Messiah(as) said that true bravery and strength is the power to reform oneself morally. 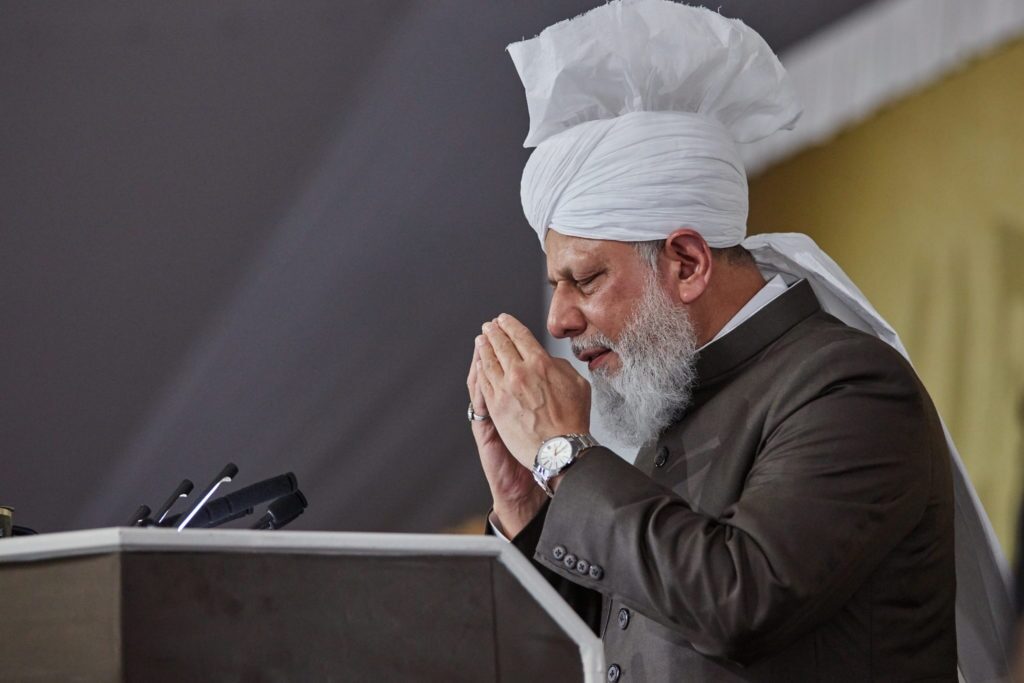 Quoting the Promised Messiah(as), Huzoor(aa) said that one should seek forgiveness before Allah’s punishment is manifested. For this, one should become constant in Tahajud, anger should be shunned and giving to the poor and needy should increase.

The Promised Messiah(as) said to rise at night and pray before Allah to achieve Taqwa; he said to leave sin and weaknesses. If one does so and also prays, then Allah will bless him and he will witness a change within himself.

Then, with great anguish, the Promised Messiah(as) said:

“I say it again and my friends should hearken to my words that they are not taken to be mere tales and fables. I have said all these things with true anguish and pure worry that is naturally in my spirit … Remember and believe that we will one day go to Allah.”

One should remember that the torment of hell will be extremely tough and painful.

Hazrat Amirul Momineen(aa) then prayed for all to follow the teachings of the Promised Messiah(as), fulfil the Bai‘at in its true sense, become true members of Ansarullah, be the ones who leave a good example for our future generations and gain the pleasure of Allah. 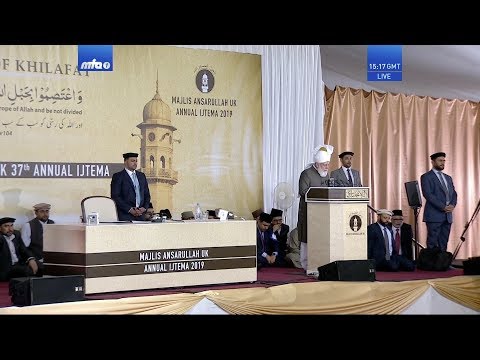