Progress of the Ahmadiyya Muslim Community since 2018 Jalsa Salana 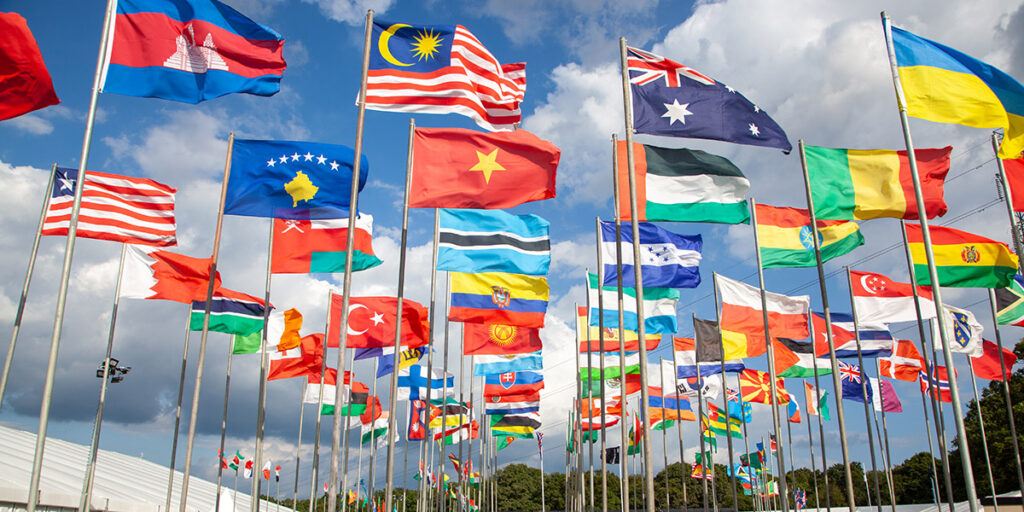 After Tashahud, Ta‘awuz and the recitation of Surah al-Fatihah, Hazrat Khalifatul Masih V(aa) mentioned the blessings of Allah and the success and expansion of the Jama’at around the globe.

To date, by the grace of Allah, Jamaats have been established across the globe in 213 countries of the world. In the last 35 years alone, Allah has blessed the Jamaat with 122 new countries.

A new Jamaat has been established this year in Armenia. Huzoor(aa) then mentioned the geographical location along with demographics of Armenia. He mentioned that Armenia is a very strong Christian country. The populace is proud of the fact that they are the first country to accept Christianity. Other religions cannot be fully established in Armenia, but by the grace of Allah and as a result of the efforts of the missionary and Jamaat of Georgia, a new Ahmadi Jamaat has been established in Armenia.

This year, by the grace of Allah, 849 new Jamaats were established in the world, with the most new Jamaats in Africa. Ghana has 171 new Jamaats, Niger has 102, Ivory Coast has 83, Sierra Leone has 78, to mention a few. The message of Ahmadiyyat reached 1,499 new places.

Concerning mosques, there are various faith-inspiring incidents, Huzoor(aa) said. In Tanzania, a new group of Ahmadi converts built a mosque. They would go through tough physical feats to bring rocks and materials to build the mosque. Men and women played an equal role in building the mosque, with women often cooking all the meals for the workers. The mosque seemed impossible to build as its location was very deep in rural areas. But now, by the grace of Allah, the locals are very happy. The mosque has proved to be a great means of tabligh, with 15 new Bai‘ats achieved during the building of the mosque.

In a region of Mali, this year, a regional mosque was built. The Jamaat had tried to build a mosque there on many occasions but opposition would always hinder them. In fact, the mayor would join in stopping the construction of the mosque. Allah blessed the Jamaat in such a manner that the mayor was changed in this area, and the new mayor donated 5 hectares to the Jamaat for the building of the new mosque. The mayor faced great opposition but did not waver at all in his decisions. Now, by the grace of Allah, a great new mosque has been built.

A total of 349 new mission houses have been built this year.

Huzoor(aa) mentioned that in Africa, the local Ahmadis build their mosques through voluntary waqar-e-amal. Huzoor(aa) said that 91 counties took part in waqar-e-amal and 48,470 sessions were held that saved $5,250,000.

331,810 books were printed by Raqeem Press UK. Huzoor(aa) also mentioned the printing works done by the Ahmadiyya Press across Africa where 9 presses are working. They are provided machinery from the UK Raqeem Press.

Talking of Wakalat-e-Tasnif in the UK, Huzoor(aa) said that this year, the 5-volume commentary had been reprinted with a better typesetting and it was available at the book stall. The 3rd edition of Tadhkirah had been published and the second volume of Malfuzat, had been printed now as well. Huzoor(aa) mentioned an array of other literature, including Huzoor’s lectures that have been either published, are in revision or almost complete. A new copy of the Holy Quran has been reprinted with better quality text and a beautiful cover. The Turkish Desk has also translated literature.

Various books have also been translated into English by the Fazle Umar Foundation, including Truth About Salvation, The Beliefs of the Ahmadiyya Muslim Community, and The Call of Heaven.

Talking of book fairs, Huzoor(aa) mentioned an incident by the missionary within Argentina. He wrote that a man, by the name of Oscar, came to the book fair. When he passed the Jamaat stand, he felt a strong attraction to it. Later, he purchased The Philosophy of the Teachings of Islam from the stand. After a while, he returned and said that the book had changed his life. The answers which he once longed for had been given to him in this book. The man said that he developed a desire to know more about the author, and soon realised he was the Mahdi. This man said he knew that the author of The Philosophy of the Teachings of Islam was upon the truth and he accepted Ahmadiyyat. 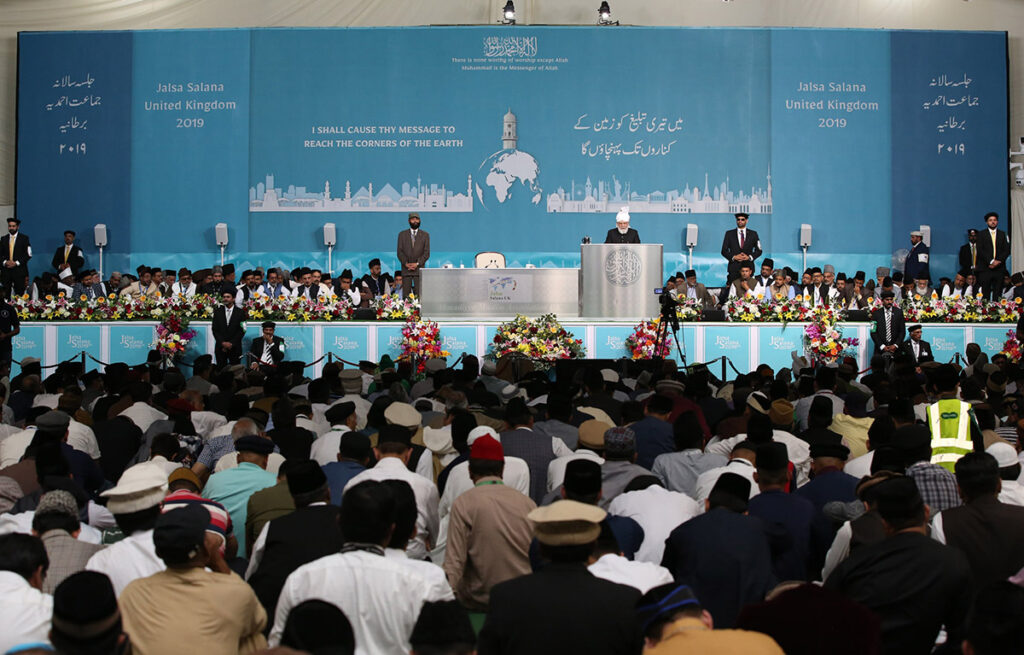 The Jamaat, by the grace of Allah, published 718 various pamphlets, leaflets and literature in 49 different languages

Huzoor(aa) mentioned that Qadian provides a lot of literature to the worldwide Jamaat. The print amounts to more than 62,000.

At present, Jamaat magazines, newspapers and newsletters etc. total 122 and are published in 26 languages.

519 regional and central libraries have been established and they are sent books from London and Qadian. This number is now growing.

Wakalat-e-Tamil-o-Tanfidh is also doing good work across India and Bhutan. There have been renovations across Jamaat properties in India, especially Qadian.

28 books of the Promised Messiah(as) have been translated to Hindi.

Huzoor(aa) mentioned that the Arabic desk had translated and published an array of books this year. Some of these included Seir-e-Ruhani, Malaikatullah, A Man of God, and Fiqhul-Masih. The desk is in its final stages of revising the twentieth volume of Ruhani Khazain.

Talking of the benefits of MTA Al-Arabiyya, Huzoor(aa) related various incidents. One man, for instance, after seeing the Promised Messiah(as) in a dream accepted the Jamaat after his family had accepted earlier.

The Russian Desk has completed translating most of the sermons of Huzoor(aa). At present, the 4th edition of the Holy Quran in Russian is being published.

The French Desk is also working on various projects and have an active website along with platforms on social media. More than 1.3 million people have visited web-pages of their website. Various book of the Promised Messiah(as) and the Khulafa have been translated into French while also being revised.

The Chinese Desk has also been carrying out projects. Huzoor(aa) said that a lot of work took place in the time of Usman Chini Sahib. Huzoor(aa) prayed that may Allah grant us another servant of Islam who is purely of Chinese origin so that he may also translate literature as did the late Usman Chou Sahib.

The Turkish Desk have also translated many books of the Promised Messiah(as) and the Khulafa.

The Swahili Desk has also been working on various translations, especially MTA programmes. Huzoor(aa) mentioned that the Swahili Desk is established in the UK, Rabwah and Tanzania.

In 2018, the Indonesian desk was established and live translations of Huzoor’s sermons are now given as well as translations of various books by the Promised Messiah(as).

The Spanish Desk has also covered various translations of literature and Huzoor(aa) mentioned the Spanish website of the Jamaat as well.

55,545 exhibitions have been held throughout the year.

When a PhD student in Calcutta, who is researching Jesus in India and is also head of an institute, came to know about the research of the Promised Messiah(as), he desired for these teachings to be presented within his institution.

16,257,000 leaflets were given out this year. A very strong leafleting campaign was held throughout Jamaats, some of which include Germany, UK , Australia, Spain, Holland, Canada, Sweden, France, Haiti, Portugal, America. In India, 572,000 leaflets were distributed.

Huzoor(aa) then presented the various achievements by the Press and Media Office in London.

While discussing the Waqf-e-Nau department, Huzoor(aa) said that a total of 1,345 joined this noble scheme in the past year.

Talking of departments of the Jamaat, Huzoor(aa) said that Makhzan-e-Tasaweer had covered various events throughout the year.

Hazrat Amirul Momineen(aa) mentioned that the weekly Al Hakam is available on website and on app. Huzoor(aa) said that this newspaper has proven to be beneficial for English readers and has material on the latest news, research and history.

Al Fazl International is now available in colour print and since 14 June has been available on website and applications.

Ahmadiyya Archive and Research Centre was also mentioned and Huzoor(aa) said that it is doing good work in archiving artefacts.

Alislam.org has uploaded hundreds of book in Urdu and English on their website. The Quran application has been improved on iPhone, while other improvements have been made across the site and its applications.

MTA International is currently working within 16 departments with more than 400 volunteers. Currently there are 5 channels of MTA that are broadcasting 24 hours a day. At present, there is MTA 1 , MTA Africa, MTA 2, MTA Africa 2, MTA 3 Al Arabiyya. Huzoor(aa) mentioned that at present, MTA is covering 17 languages. Huzoor(aa) explained that MTA is serving as a great means of tabligh and we are witnessing a lot of converts.

Huzoor(aa) mentioned the works of the Nusrat Jehan scheme and the great number of hospitals and schools developed by them. We now have 685 schools in 12 countries.

Many people have accepted the Jamaat as a result of true dreams. Opposition has resulted in many Bai‘ats and we are witnessing a great positive transformation within new converts in terms of their high morals. Huzoor(aa) mentioned that very strong Jamaats are being established.

Huzoor(aa) said that the efforts of those who oppose the Jamaat are resulting in naught and the Jamaat is moving from strength to strength. 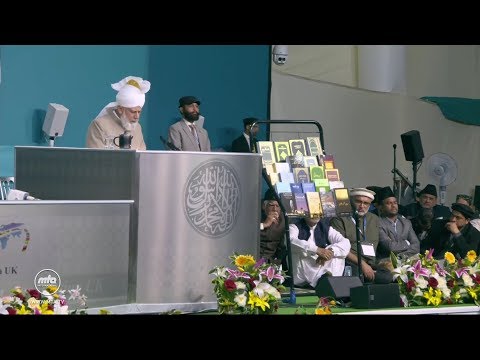