An address by Hazrat Mirza Masroor Ahmad, Khalifatul Masih V delivered on 19 January 2005 at a Peace Dinner in Baitul Futuh, Morden, South London, to an audience of civil dignitaries, politicians, leaders of many faiths, businessmen and others. 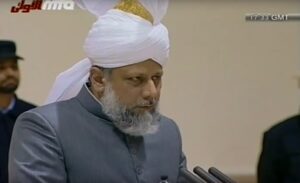 After Tashahhud (bearing witness that there is no God but Allah and bearing witness that Muhammad is the Messenger of Allah) and Ta’awwudh (seeking refuge in Allah from the accursed Satan) and beginning in the name of Allah, the Most Gracious and Ever Merciful, Huzur said:

All honourable guests, Assalamu alaikum (peace be upon you all).

Today, everyone is very much concerned for the present situation of peace in the world, but despite this concern, the situation is getting worse day by day. Efforts of the so-called world peace champions are of no avail. Then, how can peace be established in the world?

Firstly, we have to find out the reasons. In my opinion, one of the most important reasons for unrest in the world is that man has stopped following the commandments or guidance of God or has begun to interpret these teachings in his own self-made meanings. All the prophets and messengers of God, who came into this world, taught the people who believed in them to follow the commands of God. The final piece of this jigsaw was put in place through the Holy Prophet Muhammad(sa) by God Almighty. In the Holy Qur’an there are quite a number of verses which command us to fulfil the requirements of justice and maintain peace in the society. I quote one of these verses that says:

O ye who believe! be steadfast in the cause of Allah, bearing witness in equity; and let not a people’s enmity incite you to act otherwise than with justice. Be always just, that is nearer to righteousness. And fear Allah. Surely Allah is aware of what you do. (Ch.5:V .9)

So, see how clearly it is stated that one should fulfil the requirements of justice in compliance with the commands of God Almighty.

The commands of God are to worship God and to take care of His creation. Look after mankind in such a way that even if there is enmity between you and another people, even if they have been cruel towards you and they do not even give you the right to live, even then, should you get a chance to take your revenge, it should not incite you to match their cruelty. If the fighting is against its army or against some leaders, do not extract your vengeance against ordinary persons living in its towns and cities nor kill its innocent women and children. If you do this, you will not be believers of God.

Remember also not to be cruel to a nation merely because an ally or a friendly government of yours is against the people who neither caused you any harm nor caused any harm to any ally of yours. Or if it caused you some harm, it does not mean that instead of fighting with its government, regime or its force, you begin to show your enmity even against its citizens, children and its women. God teaches us never to be so unfair because this action removes you away from justice.

Righteousness means that if you have the fear of God in your heart, then you should act strictly in accordance with justice because God Almighty can see everything and is fully aware of what you do. You can fool the world by trying to justify your action that ‘we wiped out such and such a place because all its people were cruel’ and ‘we had to rain down bombs indiscriminately in such and such a place because terrorists were hiding there’. If you do this, remember that God is seeing everything and even if you can fool a few, God cannot be deceived. So be fearful of God and fulfil the requirements of absolute justice and generate kindness for mankind and the creation of God.

The Holy Qur’an is filled with many such teachings. So whoever cannot fulfil these requirements of absolute justice, is not acting in accordance with the commands of God Almighty. So everyone who calls himself a Muslim must keep this teaching in mind. Likewise, if the Christians and believers of other faiths act in accordance with the true teachings of their respective faiths, peace can prevail in this world.

The purpose of the advent of the Founder of the Ahmadiyya Muslim community, Hazrat Mirza Ghulam Ahmad(as) of Qadian, was to bring mankind closer to the recognition of its One Creator and to draw the attention of man to honour the rights of men. He says:

‘The task for which I have been commissioned is that the chasm that has arisen between God and the relationship with His creation should be removed and to re- establish love and sincerity and by showing the truth, to end religious conflict and lay the foundations of peace.’

Thus, if the world begins to recognise its Creator, envy and hatred will end in the world. When we have Divine recognition, then we will develop the ability to both speak and listen. In any case, Jama’at Ahmadiyya (Ahmadiyya Muslim community) believes in this teaching. The Founder of the Ahmadiyya community further advises us:

‘Abandon miserliness, hatred, envy, narrow-mindedness and impatience and become as one. There are only two big orders of the Holy Qur’an: one is unity and love and obedience to the Almighty God and the second is kindness towards one’s brothers and fellow human beings.’

‘Use all your energies in spreading the Unity of God in the world; be kind to its people; do not cause any cruelty to anyone by word, deed or thought; work for the well-being of mankind; do not be arrogant to anyone even if he be your sub-ordinate; do not abuse anyone even if he abuses you; be meek and humble and good intentioned and kind to the creation so that you may be accepted. There are many who show humility but are wolves within. Many are outwardly very pure but are a snake within … while you are big, be kind to the small and do not ridicule. As a scholar, advise the foolish, demean them not by your conceit. While being a rich person, you should help the poor but not by your self- interest, or pride.’

So see, this is the teaching that the members of Jama’at Ahmadiyya impose upon them- selves and also spread amongst others. There is the teaching to work for the well–being of mankind and to be kind to man. Taking this teaching, the Ahmadiyya community is working in Africa and other countries in the fields of education and health and is engaged in other humanitarian work.

Now take for instance, as has been stated by the Amir Jama’at UK, the great destruction caused by the Tsunami in some countries; the community is serving in those countries night and day. It is not because a handful have got together whose hearts were inclined towards helping but because this is a teaching of Faith and a means of earning the pleasure of God.

Therefore, in order to establish peace in the world and for the sake of compassion to mankind, it is essential that the world should recognise its Creator.

God enable you all to think about these matters because worldly efforts cannot provide permanent peace that endures forever.

You have seen the lot of the League of Nations and you can see the condition of the UNO. We also have the claims of the superpowers before us. Everybody can imagine what they are doing! So all of you who possess very fertile minds, should put your heads together. Allah enable you to do that.

Thank you very much. 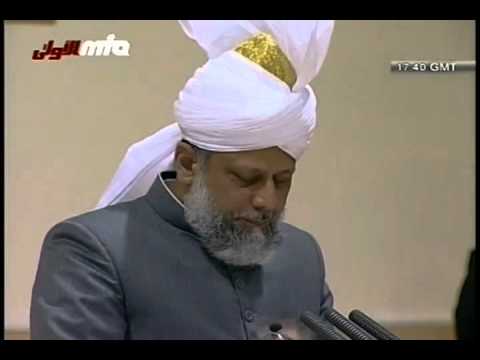