The real gathering of humanity

After his arrival at Baitul Futuh Mosque, Morden a little after 10:00 GMT on Wednesday, 5 June, Hazrat Amirul Momineen, Khalifatul Masih V(aa) led the Eid-ul-Fitr prayer after which Huzoor(aa) delivered the Eid Sermon. 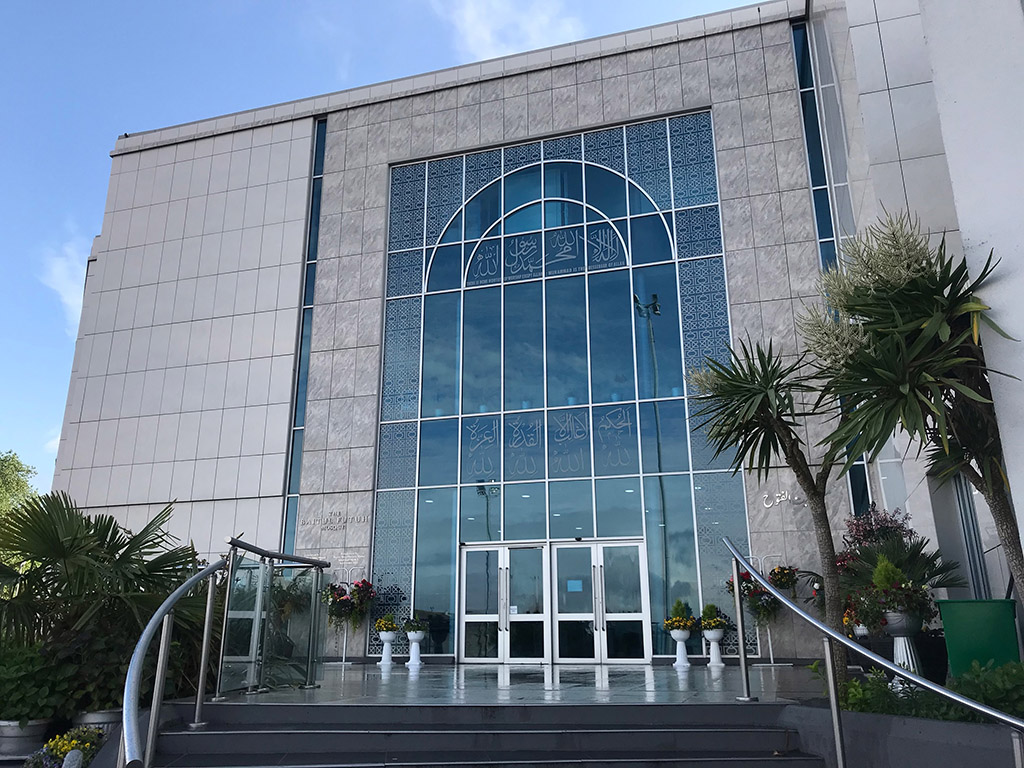 Talking about Eid and true happiness, Hazrat Musleh-e-Maud(ra) said that true happiness connotes the gathering together of people, for instance in the form of marriage, birth of a new born child or other such get-togethers. Festivals are also joyous occasions as people gather together. Thus, Huzoor(aa) explained, man is a social being who lives with other people and does not cast himself away from society.

However, there are those who suffer from depression or who prefer to cut off from society. Even to such people, doctors advise that they should socialise and surround themselves with people as much as possible.

As Islam is the natural religion, it desires for us to gather together on Eid and partake of the joys and happinesses at this occasion. The foundations of this gathering were laid when a dear servant of Allah proclaimed:

“O man, surely I am a messenger of Allah for you all.”

There were eids during the time of various prophets such as Moses(as), David(as), Jesus(as) and others. Those eids were limited to their specific locations. However, the larger Eid was when Allah commissioned His dear Prophet(sa) to gather mankind at one hand.

All prophets were sent for their specific locations at their specific times; Jesus(as) at one stage said that he would not cast bread to dogs that came from outside.

The Holy Prophet Muhammad(sa) was told:

“As for the favour of your Lord, remember it often.” The unique aspect of the Holy Prophet’s(sa) prophethood is that not only did he not refuse giving to others, rather his custom was to spread blessings in each household. His appearance in this world was the greatest eid. Through the Prophet(sa), religion was completed and divine teaching was perfected. 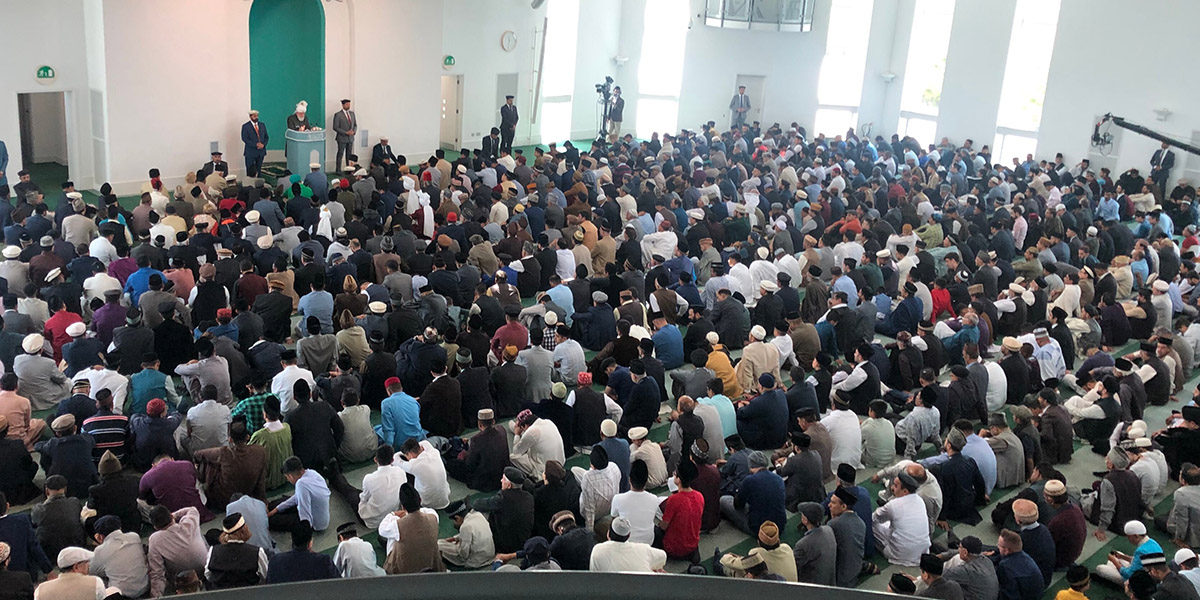 In one place, explaining this, the Promised Messiah(as) explained that the Prophet(sa) was sent to this world to create one community of the many communities that dwell on this earth, thus reflecting the unity of God and the uniqueness of the prophethood of the Holy Prophet Muhammad(sa) in that he was the sole prophet sent for the whole world.

It is to this aspect that the following verse of the Holy Quran points out:

“He it is Who has sent His prophet with guidance and the religion of truth so that He may make it prevail over all others.”

In keeping with this theme, we will truly witness Eid when the entire world gathers at one hand through the Holy Prophet Muhammad(sa). Thus, where the responsibility of experiencing the true eid in this day and age has been assigned to us, we should assess ourselves and realise our duties.

The Promised Messiah(as), at one place, explained that we should, in all circumstances, remain loyal to Allah and remain occupied in serving His religion. His Jamaat should be watchful over taking care of the rights of their fellow beings and through our loyalty, we should attempt to please Allah, by means of obligatory and voluntary prayers and deeds.

There is a dire need for us to pay attention to our responsibilities as servants of the Holy Prophet(sa) and his servant, Promised Messiah(as).

Jesus(as) at one place prayed for a prophet who would gather the whole of mankind at one place and thus bring unity in humanity.

Huzoor(aa) said that a lot of focus is spent on new clothes and celebrations on this joyous occasion. The delight behind this is because Allah has instructed us to do so. However, when we look at this celebration, we are not gaining any material benefit, although we may be obtaining spiritual benefit, provided we celebrate Eid in the true manner. Thus, at this occasion, we should bear in mind that we are celebrating a far more exalted cause; we are celebrating the purpose of the advent of Prophet Muhammad(sa) and his servant, Hazrat Mirza Ghulam Ahmad(as).

Today, the world is petrified of the slogan Allahu Akbar due to extremists and radicals. However, we should disclose the reality of such words so that the entire world feels delight in repeating and uttering the words: 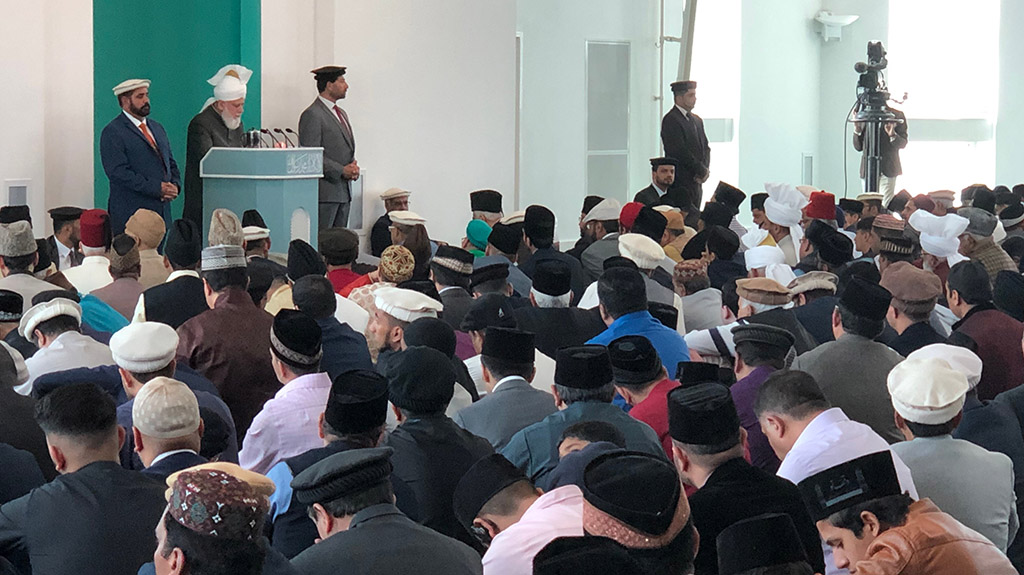 Huzoor(aa) prayed that may Allah bring that day closer when the world invokes blessings on the Holy Prophet(sa).

There is a drastic change in the world’s attitude towards Islam and religion. Huzoor(aa)said that he receives many letters from Africa saying that such and such person was a polytheist, but they eventually accepted Ahmadiyyat in Islam.

Huzoor(aa) prayed that may Allah enable us all to follow the guidance given by the Promised Messiah(as) in The Will (Al Wasiyyat) in which he said that we should, to the best of our abilities, represent him and his Jamaat before the world in order to draw them closer to the truth.

Towards the end of the prayer, Huzoor(aa) congratulated the entire Jamaat present and watching on MTA all around the world.

Huzoor(aa) then asked the Jamaat to pray for asiran-e-rah-e-Maula (prisoners in the way of Allah who are going through difficult circumstances), Shuhada (martyrs) and their families and children, missionaries (that they may be able to serve the cause of Islam Ahmadiyyat with great passion and dedication), all Ahmadis in general (that Allah may keep everyone in His protection from all evils) and Muslims in general (that Allah may enable them to hearken to the Messiah of the age). 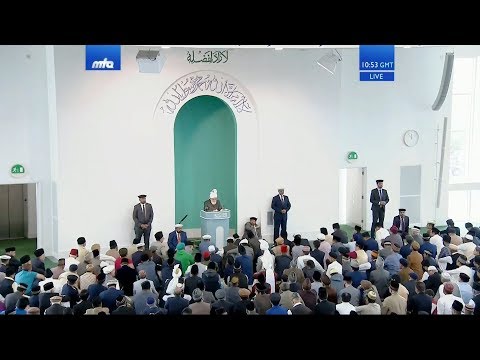 Love for Allah and Humankind - the True and Everlasting Eid & Special Prayers for Palestine and the World
Sighting of the Moon/Crescent
100 Years of the Majlis-e-Shura – Understanding its Real Purpose
Islam’s Principles for Establishing True Peace
Humanity First – Wiping Away the Tears of the Distressed
Go to Top
Start Here
Research
Contact Us
Follow Us
Copyright © 2023 Ahmadiyya Muslim Community. All rights reserved.
Privacy Policy | Use of Cookies | Terms of Service | Sitemap
Start Here