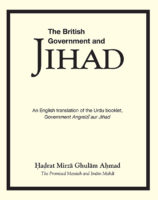 by Hazrat Mirza Ghulam Ahmad, The Promised Messiah and Mahdi(as)

These questions, which have become the focus of worldwide attention today, were answered over one hundred years ago with God-given guidance and understanding by the man who claimed to be the Promised Messiah.

Read the book in these formats or listen to the audio

Murder in the Name of Allah