First Martyr of the Second Century of the Ahmadiyya Khilafat 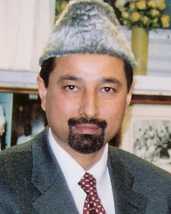 Dr Abdul Mannan Siddiqui Shaheed (46), who was District President of the Ahmadiyya Muslim Community Mirpur Khas, was murdered at about 14:30 on September 8, 2008 in Mirpur Khas, Pakistan. He was a highly qualified physician. He was known for his competence and charity. He would routinely visit remote rural areas of Sindh every month to provide free medical care to the poor. He was popular among other sections of society as well.

Dr Siddiqui is survived by his widow, a daughter and a son in their teens and his aged mother.

Dr Siddiqui is the 15th Ahmadi doctor killed in Pakistan for his faith. Since the promulgation of the notorious Ahmadi-specific Ordinance XX in 1984, he is the 94th Ahmadi killed for his faith.

“And whoso slays a believer intentionally, his reward shall be Hell wherein he shall abide. And Allah shall be wroth with him and shall curse him and shall prepare for him a great punishment.” Surah Al-Nisa’ (4:94)