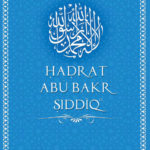 The first problem was that some of the tribes renounced Islam, simply because their tribal chiefs did not feel necessary to remain loyal to the successors for the Holy Prophet. Not only that but they started preparing to attack Medina to end the newly established institution of Khilafat. Hazrat Abu Bakr(ra). After knowing their intentions, sent troops and succeeded in suppressing their rebellion.

The second major problem faced by Hazrat Abu Bakr Siddiq(ra) was that many people refused to pay the Zakat, which was essential for fulfilling the needs of the Islamic state and caring of the poor. Hazrat Abu Bakr(ra) vowed to collect Zakat from every one and took all the necessary measures to achieve this goal.

The most dangerous of all the problems was that a number of ambitious persons pretending to be prophets, started rebellion against the Islamic state. Musalima Kadhdhab and Aswad Ansi, raised large armies and captured some of the Muslim territories. Hazrat Abu Bakr(ra) was prompt to fight back these rebellious false prophets. Despite meager resources, Allah granted him victory against the mischief mongers.

One of the many great achievements of his Khilafat was the collection of the Holy Qur’an at one place. Although the writing and arrangement of the Holy Qur’an was done under the supervision of the Holy Prophet(saw) himself, yet it was written on various pieces of skin, leaves and slates. Hazrat Abu Bakr(ra) collected all these pieces of writings in one place, and re-organized the system of Huffaz, or those who committed it to memory, in a systematic way, for the preservation of the Qur’an.

During the last days of his life, the Holy Prophet(saw) had raised an army to be sent against the Romans who had made some incursions into the Northern borders. This army was still in Medina when the Holy Prophet(saw) passed away. As Hazrat Abu Bakr(ra) became Khalifah, the law and order situation within and outside the Medina became very delicate. In view of this grace danger, many Companions of Holy Prophet(saw) advised him not to send the army against Romans. But Hazrat Abu Bakr(ra) replied forcefully, “What authority has the Son of Abu Qahafah, to stop that which was started by the Holy Prophet(saw). The Muslim army, under the command of Hazrat Khalid bin Walid(ra), crushed a rebellion in Bahrain. Then the Persians were defeated, who had supported the rebels of Bahrain. The Muslim Army also defeated the Roman forces in the battles of Ajnadan and Yarmuk, and thus the whole of Syria came under the control of the Islamic state.

Hazrat Abu Bakr(ra) passed away on August 23, 634 AD, after remaining ill for fifteen days. He was one of the ten blessed ones to whom the Holy Prophet(saw) had given the glad tidings that they had been rewarded the Paradise. He remained Khalifah for a little over two years.