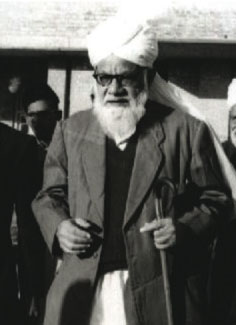 Hazrat Mirza Bashir Ahmad(ra) was born to the Promised Messiah(as) on 20 April 1893, according to the Divine prophecy: Qamarul Anbiya’ [The Moon of the Prophets] will arrive and your affair will become manifest. Soon a son will be born to you and grace will come close to you.

He passed his matriculation with distinction in 1910 and received an M.A. in Arabic in 1916, in compliance with the wish of the Promised Messiah(as).

With the blessings of Allah, the prayers of the Promised Messiah(as), the guidance given to him by his elder brother, Hazrat Khalifatul-Masih II(ra), and his God-given abilities, he was able to serve the Ahmadiyya Muslim Jama’at throughout his life in various capacities.

He was a great religious scholar, a prolific writer, and his books, articles, and speeches are easily comprehensible to an average reader. He wrote on numerous topics his magnum opus is Sirat Khatamun-Nabiyyin [The Life and Character of the Seal of the Prophets], Siratul-Mahdi, Silsila-e-Ahmadiyya, Tabligh-e-Hidayat, Kalimatul-Fasl, and Hamara Khuda [Our God], are some of his important works.

Apart from his books, he contributed many articles, the number of which runs into hundreds, to the Jama’at dailies and periodicals, especially Al-Fazl.

He was a man of God, the recipient of Divine revelations and visions and would not disclose them except rarely. One of his revelations was ‘Assalamu alaikum‘ [Peace be upon you] and another was [translation: ‘Rise Muhammadi the time of your eminence has drawn close.’].

The Life & Character of the Seal of Prophets(sa) - Volume I

The Life & Character of the Seal of Prophets(sa) - Volume II

The Life & Character of the Seal of Prophets(sa) – Volume III

Mirror of Charm and Beauty