25 interesting facts you should know about Islam

Islam is a religion founded over 1400 years ago by the Prophet Muhammad(sa). In the last few decades, it has become the object of extreme suspicion and distrust that should provoke further investigation and discussion. The followers of this religion are to be found in every corner of the globe. With over 1.7 billion adherents, Islam is the fastest growing religion on the planet. Yet, many questions are raised by people about this faith: while it claims to be a peaceful religion, why does it seem as if extremism and anarchy are its primary objectives? Can Muslims be really trusted? What is this religion about? How does it relate to other religions of the world? How can the world progress with Islam becoming more influential? There must be something more to Islam than the superficial perception held by the public. So let us get to some interesting and enlightening facts about this religion – facts you ought to know before you pass any judgement. The light of truth always penetrates hearts much deeper than any swords can! 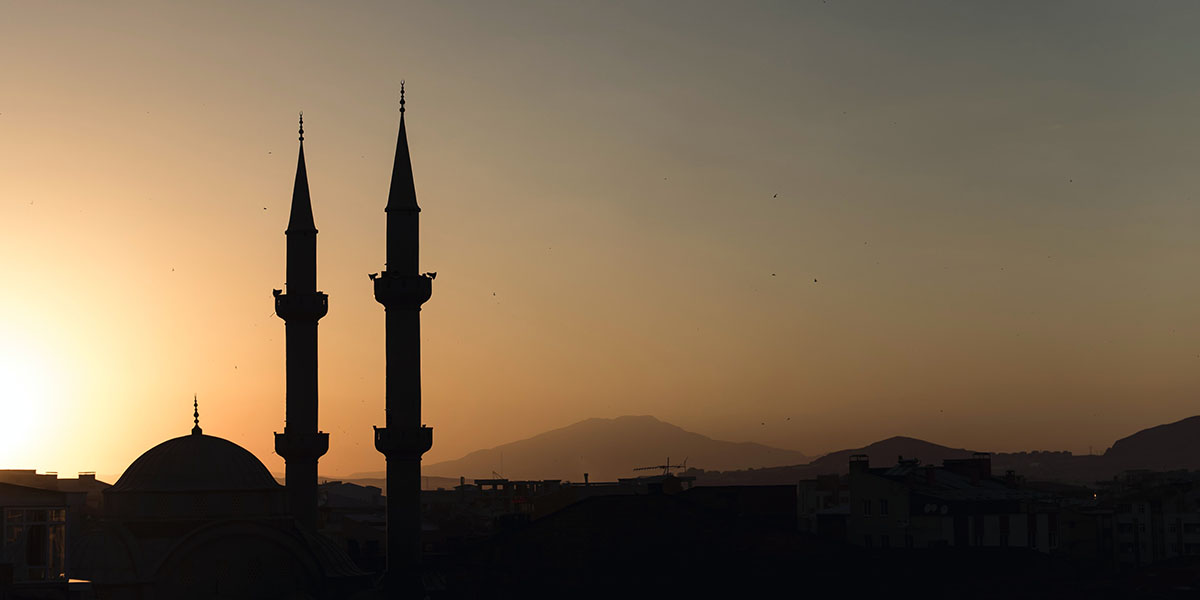 Fact #1: The word “Islam” literally means ”peace” and “submission” – meaning, peace with humanity and submission to the edicts of God. There are two concepts here: duty owed to God and rights owed to fellow human beings – regardless of race, religion, or colour. Muslims are duty bound to do good to others and sacrifice their own interests for the welfare of other people.

Fact #2: The word “Allah” is the Arabic word for God, just as Deus, Theos and Dieu are in Latin, Greek, and French. In Islam, God is One and Unique without any partners, family or companions. Islam is resolutely monotheistic. Muslims believe this is the same God Who revealed Himself through earlier prophets and other religions. The Arabic version of the Bible read by the Arab Christians also uses the word Allah for God.

Fact #3: There are many attributes of God mentioned in Islam. The two most common attributes used in the Holy Qur’an are “the Gracious and the Merciful”. According to Islam God is ready to forgive and pardon people rather than being vengeful and quick to punish.

Fact #4: The Islamic declaration of faith is simple and states: “There is none worthy of worship except Allah; Muhammad is the messenger of Allah”. In fact, when someone becomes a Muslim, there is no elaborate ritual other than the acceptance of this belief and the recitation of this declaration of faith. It is the core in belief of all Muslims and is often written inside mosques as well as displayed as fine calligraphic art in the homes of Muslims.

Fact #5: The real purpose of life for a Muslim, is to find God. This is the real reward that Islam promises a believer. Hence, all our acts of worship are a means to an end and not the end in themselves. Those that strive on this path may see their reward in this very life, not just in the thereafter. In other words, Islam shows us a personal God – a God who loves His creation – and with Whom one can have a very personal relationship.

Fact #6: While Islam does encourage simple living and shunning of extravagance, there are no monks, nuns, or lifelong prescriptions of celibacy. There is no requirement for a pious man or woman to remain unmarried their entire life. All Muslims are encouraged to marry and be part of society.

Fact #8: The Prophet Muhammad(sa) is considered only a message-bearer and not God himself. Despite the great reverence accorded to the prophet by the Muslims, he is neither worshipped nor does any Muslim pray to him. No physical likeness such as paintings or statues of the Prophet Muhammad(sa) are permitted to be made.

Fact #9: The Prophet Muhammad(sa) is the only religious leader whose life is known in great detail. He was born an orphan and could not read or write. In his private life he was a husband, father, neighbour, friend, and businessman. As a public figure was a prophet, leader, legislator, judge, statesman, and general. As the Messenger of God, he is a law-giver and reformer. He passed through every imaginable stage of human experience and left behind an example of perfect conduct to be emulated. Such a combination is not found in history.

Fact #10: Muslims are required to honour and respect the commandments in the previously revealed holy books such as the Scriptures of Abraham, the Torah of Moses, the Psalms of David and the Gospel of Jesus Christ. Muslims are also required to honour, respect and believe in all earlier prophets such as Noah, Abraham, Moses, Aaron, Solomon, David and Jesus of the Judeo-Christian faiths, as well as the prophets of other religions such as those of Hinduism, Buddhism, and Zoroastrianism. According to Islam over 124,000 prophets have appeared in history to guide mankind.

Fact #11: All religions rely on using personal faith to achieve certainty of belief. Islam goes beyond this approach and invites the believer to use reason and experience as well and not rely on mystery, myths and fables. It is a comprehensive religion that satisfies your intellect and the depths of your soul.

Fact #12: Jesus, (peace be on him), is regarded as a blessed Prophet and a Messiah for the Jews but not a literal son of God. His mission was to fulfill the law of Moses by guiding them to the correct understanding and practice of the commandments and edicts. In fact, there is a chapter in the Holy Qur’an named after Mary, the mother of Jesus. Mary is regarded with very high praise and given a very high station among all the women in history.

Fact #13: Islam teaches that there is no inherited sin. All children come into the world pure and innocent. It is our own actions and choices in life that can be sinful or virtuous. Salvation in Islam is achieved by following God’s Commandments. However the assignment of Heaven and Hell is up to God alone and decided after the death of a person. The Holy Qur’an places great importance on personal responsibility and continual self-improvement.

Fact #14: Islam explicitly teaches that “there is no compulsion in religion”. One is free to practice or reject any religion. Forcing someone to convert to Islam or killing a person who changed his faith from Islam to something else, is contrary to Islamic teachings. Also apostasy or leaving Islam is NOT punishable. Islam promotes total religious freedom for all peoples and total accountability for one’s actions.

Fact #15: There is no middle man or intermediary between human beings and God. Islam states that we all have a personal connection with God and he is the only one who can absolve us from our sins. We do not need to make a confession to another human being. You need only to talk directly to God and that is what daily Prayers promote.

Fact #16: Islam upholds loyalty to one’s country or nation as part of one’s faith whether the country is Muslim or non-Muslim. This is demonstrated around the world as we have legions of proud and loyal American Muslims, Canadian Muslims, British Muslims, Ghanaian Muslims, French Muslims, Pakistani Muslims, Indian Muslims, Chinese Muslims, Iranian Muslims and from various other nations too.

Fact #17: Islam does not specify a particular form of government. Rather, it imposes the condition that, no matter what the form, the responsibilities of a government should always be discharged with equity, justice, and compassion – always fulfilling and upholding basic human rights. Islam does not allow any discrimination on the basis of colour, creed, wealth or social status.

Fact #18: Islam teaches and upholds the equality of all people, regardless of race or social status abolishing all systems that are against it including the caste system. Total brotherhood of mankind is symbolically demonstrated during daily Prayer at the mosque. Those who arrive first fill up the first rows and stand shoulder to shoulder in their supplications.

Fact #19: Muslim women are not prohibited from getting education, holding a job or participating in society in general. Islam prescribes different roles to both men and women. Furthermore, mothers are to be respected and daughters are to be cherished. Women are regarded with great respect in Islam. In its admonitions, the Holy Qur’an addresses both men and women equal, to do good and shun evil.

Fact #20: The word “Jihad” in Arabic literally means “to strive” and does not hold within it the connotation of “Holy War”. This striving can be carried out both for the improvement of one’s own self as well as for defensive purposes, when the Muslims are prevented from practising their religion. However, when carried out in the form of armed defense, it must abide by very strict rules governing such activity with quick return to peace being among them. Islam explicitly forbids the spreading of faith through coercion or compulsion. The Prophet Muhammad(sa) never used the sword to spread Islam. None of the so called Jihad of present day falls under this strict definition, Therefore, killing innocent people as part of some kind of battle or suicide battle is a foreign concept in Islam and is wholly forbidden.

Fact #21: The classic rivalry between Science and Religion is not an issue with Islam. Scientific inquiry is promoted by the Holy Qur’an which encourages reflection and thinking. The Holy Qur’an incorporates religious truths, history, commandments, and the description of natural phenomena, such as the big bang theory, the development of the human embryo, and the creation of all life forms from water, just to name a few. There is no contradiction of any current scientific truth with any statement of the Holy Qur’an.

Fact #22: Islam talks about the creation of men and the universe in multiple stages over a period of time. In complete opposition to the popular notion, Adam was not the first man but the first prophet of God and Eve was his wife. Being the first prophet, he taught his people to worship one God and laid the foundation of DOs and DON’Ts on which the religious commandments of subsequent prophets were built.

Fact #23: There are no eternally chosen races, ethnic groups or favoured nation of God according to Islam. Each person and entire groups or nations have an opportunity to become the beloved of God by practising the best conduct and sincere faith. The best people in the world are those who are the most righteous regardless of any other traits. Hence, entire nations are not accursed. The opportunity to be the best is open to all of us if we work towards it with true sincerity.

Fact #24: Islam teaches belief in angels, who are obedient servants of God. It was the Angel Gabriel, the angel of revelation that revealed Allah’s direct words, the Holy Qur’an, to the Prophet Muhammad(sa) over a period of many years. Muslims believe in many other angels such as the Archangels Michael, Raphael, and Izrā’il.

Fact #25: Islam is a religion that is compatible with modern times. A Muslim is someone who is concerned about good morals and behaviour. There is nothing that stops a Muslim from being part of a contemporary society according to the Holy Qur’an. Muslims drive cars, use smartphones and the Internet, vote in elections, have jobs and careers, invest in business, teach, travel the world, raise families, play golf, go sailing, pursue higher levels of education and are wonderful neighbours wherever they are found.

Islam is a Unifying Force in the world. It was designed to create harmony among all nations and peoples. Islam also advocates international peace and the end of religious wars.

Religious Tolerance and Freedom in Islam
The Hunt to Capture the Real Islam
Islam – Beyond Culture and Ethnicity
Should Islam Really Be Feared…?
The Islamic Dilemma: Should We Fear the Religion of Peace?
Go to Top
Start Here
Research
Contact Us
Follow Us
Copyright © 2021 Ahmadiyya Muslim Community. All rights reserved.
Privacy Policy | Use of Cookies | Terms of Service | Sitemap
Start Here