Islam – Beyond Culture and Ethnicity

Allah the Almighty says in the Holy Qur’an,

“Surely all believers are brothers. So make peace between brothers, and fear Allah that mercy may be shown to you.” (Al Quran 49:11)

The Holy Qur’an has laid a beautiful doctrine of equality for its followers, effectively shunning any form of prejudice against, ethnicity, culture, color, status, or race. And it is this synthesis of universal brotherhood and equality provided by Islam that I’d like to discuss with you all today.

I grew up in Chicago and I’ve been witness to the segregation and violence that are byproducts of racial inequality in my city. We have to ask ourselves, why do people feel the need to fill this vacuum in their lives with crime? Why is not only Chicago, but the world in such distress? Beyond the borders of Chicago a quarter of the world’s slaves are children. There is forced female mutilation in Africa. There are 4.5 million victims of sex trafficking. There is legal torture and abuse without justification in Chile.[1]

These travesties, these crimes, would not be occurring if true equality existed.

For any nation to have true equality, a strong foundation is required. The preamble for the United States Declaration of Independence states, “We hold these truths to be self-evident, that all men are created equal, that they are endowed by their Creator, with certain unalienable Rights, that among these are Life, Liberty, and the pursuit of happiness.”[2]

So when the Declaration of Independence states that it is, “self-evident, all men are created equal,” it apparently wasn’t evident enough that African Americans and Native Americans are human and are deserving of the promising words of equality written in the preamble. I ask you, how can our country have a solid foundation for equality when the doctrine we refer to, to understand our rights and our American identity is denying people of color of their status as human beings?

In one of his last addresses to the Muslim community, the Holy Prophet (may the peace and blessings of Allah be upon him) left with these parting words showing how strongly he felt on the issue of equality. He said, “All Muslims are as brethren to one another. All of you are equal. All men, whatever nation or tribe they may belong to, and whatever station in life they may hold are equal. Even as the fingers of the two hands are equal, so are human beings equal to one another. No one has any right, any superiority to claim over another. You are as brothers. O men, your God is One and your ancestor is one. An Arab possesses no superiority over a non-Arab, nor does a non-Arab over an Arab. A white man is in no way superior to a black nor for that matter, is a black man better than a white.”[4] 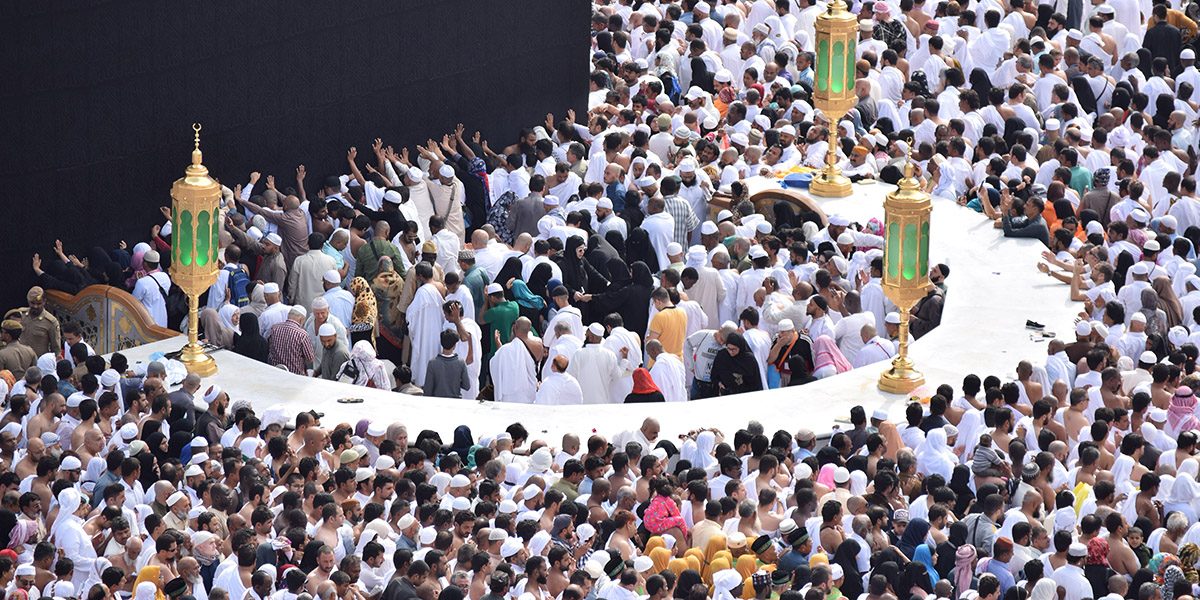 The Holy Prophet (may the peace and blessings of Allah be upon him) spoke of his vision for equality, taking the regional and cultural aspects out of Islam. He knew the influences of the negative effects of culture would hinder the progress of Islam, yet he did not discourage people having different cultures but rather discouraged superimposing negative cultural practices and passing them off as Islamic teachings. The reasoning behind this, eloquently put by President Jimmy Carter is, that when people become too immersed in their culture and ethnicity they begin to think, “…I am superior and my beliefs should prevail, and anyone who disagrees with me is inherently wrong,’ and the next step is ‘inherently inferior.’ The ultimate step is ‘subhuman,’ and then their lives are not significant.”[6] Islam, rather, looks to love and to cherish every human being no matter their cultural or ethnic associations.

Spreading salaam. That is such a simple action we can all engage in to promote and achieve equality. So much so after the life of the Holy Prophet (may the peace and blessings of Allah be upon him) it is narrated that there were two companions who called upon each other. One called upon the other and asks his friend to go to the market with him. The other friend is quieter and more reclusive and it takes much cajoling to convince him to go to the market. Once at the market the reclusive friend notices his companion is not buying anything but is rather putting all his attention towards saying salaam and greeting people and he was saying salaam to literally anyone and everyone. The more reclusive friend finds himself with the opportunity then to do the same. After they both go home a couple days go by and the reclusive of the two companions calls his friend and he asks, “when can we go to the market next?” His friend is absolutely perplexed. He says, “when I first called you a couple days ago it took much persuasion and you did not want to go to the market. Suddenly today you are calling me!” He’s taken aback by his friend’s change of heart. His friend responds saying that he was amazed at how much peace he could give and receive just by saying salaam. He was looking forward to feeling that peace again and incurring the blessings of Allah.[8]

Allah the Almighty says in the Holy Qur’an,

In this verse we see that Allah has ordained for every human being no matter their social status, wealth, descent, affiliations, color, or background to be treated with kindness and only be judged by their morality and service to God and humanity. The Promised Messiah (on whom be peace) said: ‘I do not like the words of those who limit their compassion to their own ethnicity. I advise you again and again to never ever restrict your sphere of compassion.’ He also said: ‘You should extend compassion to all of God’s creations as if you are their blood relative, just like mothers are with their children. One who does good with natural passion like that of a mother can never be ostentatious.’[9]

The Qur’an further delivers the five pillars of Islam, which provides a very simple path for the transcendence of culture and ethnicity. First, we say the Shahadah and promise dedication to Allah and the Holy Prophet (may the peace and blessings of Allah be upon him). Secondly, during prayers we see the practical application of our worship in that kings and servants pray in the same row. Whites stand shoulder to shoulder with blacks just as the rich stand shoulder to shoulder with the poor. Thirdly, during Ramadan we strip down to bare emotions and seek to find empathy for all those less fortunate and pray for their well-being. Fourth, we offer Zakat, the charity towards man, as a form of purification for ourselves and to relieve the needs of our brothers and sisters in society. We sacrifice a portion of our income to relieve poverty, distress, debt, and to propagate Islam. And lastly, Hajj; the most beautiful event the world enjoys annually. It is the one and only global event, which breaks down cultural barriers and strips millions of people to bare essentials. From the aerial view of Hajj one would observe only a sea of white clothing worn by each participant. Everyone would be indistinguishable. Through this event, Islam reminds us that there is only one race, the human race. I want to emphasize again, that I am not romanticizing Islam. However, here in America today, if we understand the true value of Islam and recognize it’s true teachings and act upon those true teachings, we could create a place transcendent of culture, transcendent of inequality, transcendent of bigotry, transcendent of hate, transcendent of violence, transcendent of discrimination.

Allah, the all knowing, has created humanity in a very special way, which even baffles science at times. Scientist, Dr. Spencer Wells, dedicated much of his life to finding the first origin of man on earth. His findings have jolted the world. He successfully proved that the first markings of humanity began with the “Saan” a tribe in Africa and from them sub-tribes came and the world was populated. Though science has only just proven this, Allah told us centuries before in the Holy Qur’an that man would come from a tribe from which sub-tribes would come. Allah says in the Holy Qur’an:

O mankind, We have created you from a male and a female; and We have made you into tribes and sub-tribes that you may recognize one another. Verily, the most honourable among you, in the sight of Allah, is he who is the most righteous among you. Surely, Allah is All-knowing, All-Aware. (Al Quran 49:14)

This verse from the Qur’an teaches us that Allah has made us all equal in His eyes but provided us with varying nations and races to allow us to know each other, to allow us to benefit from our differing characteristics, and thus through recognition of one another, progress as a human race.

Further, Dr. Wells also spoke of human genetics. Scientifically speaking, most species are created with high genetic diversity. Humans, however, have DNA that is more than 99.9% similar between all individuals. Take a moment; look at the person to your left and to your right and then at all the occupants in this hall. You are almost identical to all these people by this 99.9%. Other species have a genetic diversity at least 50 times greater than our own. It is astonishing just how alike Allah has made all of us. The strife the world is undergoing is largely over this tiny 0.01%. That’s it 0.01%. This difference is so infinitesimal, we could round off and one could say Allah has made us as ONE. And He has made us as one. The Promised Messiah (on whom be peace) said, “Allah desires to make all of mankind as if they were one person. This could also be called a democratic singularity. Under this concept the diversity of mankind could be considered as one individual. The purpose of religion is also that the human race be united in the form the beads of a Tasbeeh (rosary) through one thread.”[10]

The Holy Prophet Muhammed (may the peace and blessings of Allah be upon him) informs us that the simile of a single body conveys the closeness of the Muslim community. If a group of Muslims is taunted or suppressed, then consider those actions and feelings flowing through you, and if you cannot feel the pain, then you can be considered to be an incomplete Muslim.

Please join me, as I pray that Allah grant us each the ability to be tolerant to our dear brothers and sisters, that we feel one another’s pain, that we feel motivated to alleviate that suffering, that we promote the health and happiness for all of humankind, and that we carry out the vision of equality that the Holy Prophet (may the peace and blessings of Allah be upon him) had for us. Ameen.

25 interesting facts you should know about Islam
Religious Tolerance and Freedom in Islam
The Hunt to Capture the Real Islam
Should Islam Really Be Feared…?
The Islamic Dilemma: Should We Fear the Religion of Peace?
Go to Top
Start Here
Research
Contact Us
Follow Us
Copyright © 2023 Ahmadiyya Muslim Community. All rights reserved.
Privacy Policy | Use of Cookies | Terms of Service | Sitemap
Start Here