Are non-Ahmadis Muslim or non-Muslim? The Ahmadiyya Muslim Perspective

In this day and age, it has become quite common for certain Muslims to declare others Kafir (disbeliever) or non-Muslim or outside the pale of Islam or munafiq (hypocrites). Many a times the person declaring a Muslim a Kafir does not know much about religion himself but follows the practice of other Muslims and declares certain sects Kafir or non-Muslim. For some Muslims, it is even the norm to declare Kafir anyone who dares disagree with them.

When Ahmadi Muslims point out the dangers of such takfeerism and how it disunites the Muslim Ummah, non-Ahmadi Muslims start pointing to certain lines, phrases or paragraphs in the Ahmadiyya Muslim literature where non-Ahmadis are called Kafir or non-Muslim. In this article, I will unpack the issue of Kufr and Islam and what it means to be a Muslim in the truest sense, and how that is different from being a member of the Muslim Ummah.[i]

One who recites the Kalima is a Muslim

In this regard, the Promised Messiah(as) writes:

“Since the beginning, it has been my belief that rejecting my claims does not make a person Kafir or Dajjal. However, he is misguided and has deviated from the right path”. [Taryaqul Quloob, Ruhani Khaza’in, volume 15, page 432]

Near the end of his life, Sir Fazal Hussain, a political leader, came to meet him and asked him a few questions. At one point, he said, “If all non-Ahmadis are called Kafir, nothing will remain of Islam”. In response to this, the Promised Messiah(as) said:

“We do not consider a Kalima-reciting person outside the pale of Islam, unless he calls us Kafir which would make him a Kafir” [Malfuzat (1988 edition), volume 5, page 635].

In light of these statements, it is abundantly clear that those who recite the Kalima are Muslims and no-one has the right to call them Kafir. This is a fundamental principle in Islam and the Ahmadiyya Muslim Community is firm in this principle.

The question which is to be asked is in relation to those quotations where non-Ahmadi Muslims have been called Kafir. They are not contradictory to the above mentioned principle. This is because when non-Ahmadi Muslims are called Kafir, it does not mean that they have gone outside the pale of Islam in an absolute sense. They remain within the Muslim Ummah and they are part of the Millat-e-Islam (Community of Muslims).

This is similar to the way the Holy Prophet(sa) equated certain actions to Kufr, yet not calling those who committed those sins as Kafir or outside the pale of Islam. For instance, he is reported to have said, “There is no person who knowingly claimed someone else as his father (besides his own) but has committed Kufr (become a disbeliever)” [Sahih Muslim, Book 1, Hadith 123]. Similarly, he has said:

“Verily, between man and idolatry and Kufr is the negligence of prayer” [Sahih Muslim, Book 1, Hadith 153]. In other words, skipping a prayer means that a person has committed Kufr. That obviously does not mean that whenever a Muslim commits the sin of neglecting his prayer, he should be declared Kafir and outside the pale of Islam.

Instead, what it means is that these are acts of sin and while a person is committing such sinful acts, he or she has committed Kufr in one way. They have not left Islam as they continue to profess Islam as their religion and continue to adhere to their belief in the Kalima. There may be individuals who commit heinous crimes that are directly contradictory to the teachings of Islam and yet call themselves Muslim and claim to believe in the Kalima. We do not judge them. It is up to Allah to determine the level of their belief and faith. We do not claim to know what is in their hearts in terms of their faith. If they break the law, they are to be punished under the law as Muslims. It would not be presumed that they have become non-Muslim due to their crimes.

In the Ahmadiyya Muslim literature, wherever non-Ahmadi Muslims are called “Kafir” or “outside the pale of Islam”, it is only in reference to their rejection of the Promised Messiah(as). It does not mean that they have left the Millat or Community of Muslims. They continue to be part of the broader Muslim community. From our perspective, they have left the pale of true Islam but they continue to be part of the Ummah.

What is true Islam? Different Muslim sects define it in different ways. From the Ahmadiyya Muslim perspective, true Islam includes belief in the Promised Messiah(as) and obedience to his Khulafa. Similarly, each other Muslim sect would consider their sect-specific beliefs as part of true Islam. This is a matter of their interpretation. As far as the Ahmadiyya Muslim Community is concerned, all such sects fall within the banner of Islam, though they have committed the mistake of not following the Imam of this age, Hazrat Mirza Ghulam Ahmad(as), the Promised Messiah.

Levels of Faith and Kufr

This discussion of different forms of Kufr is not unique to the Ahmadiyya Muslim Community. Imam Ibn Taymiyyah has discussed it in his book, Kitabul Imaan. For instance, he writes: 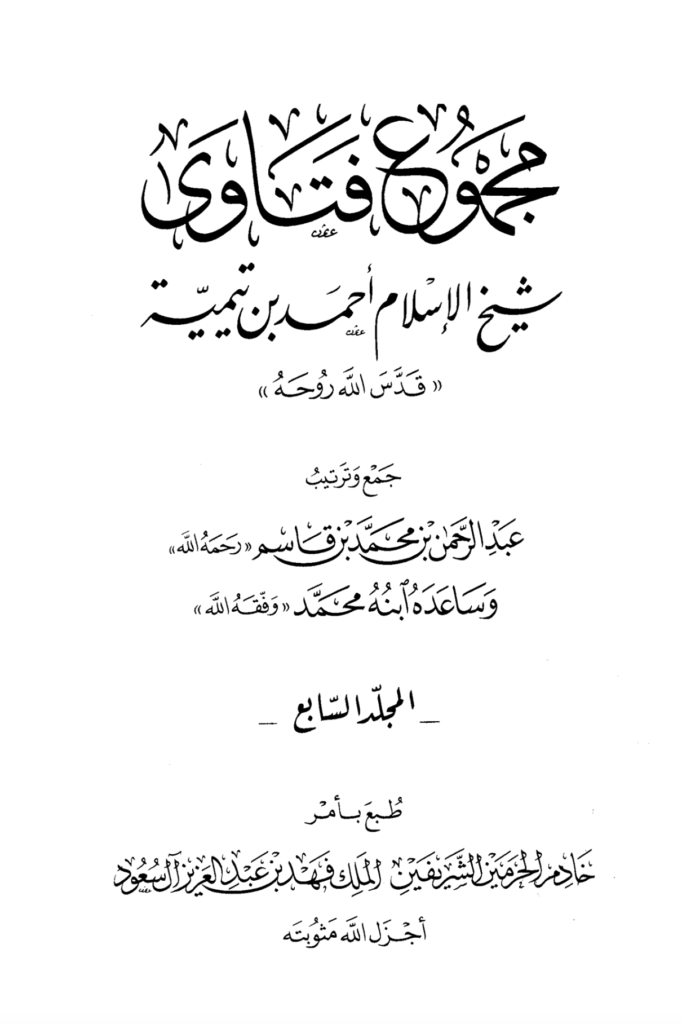 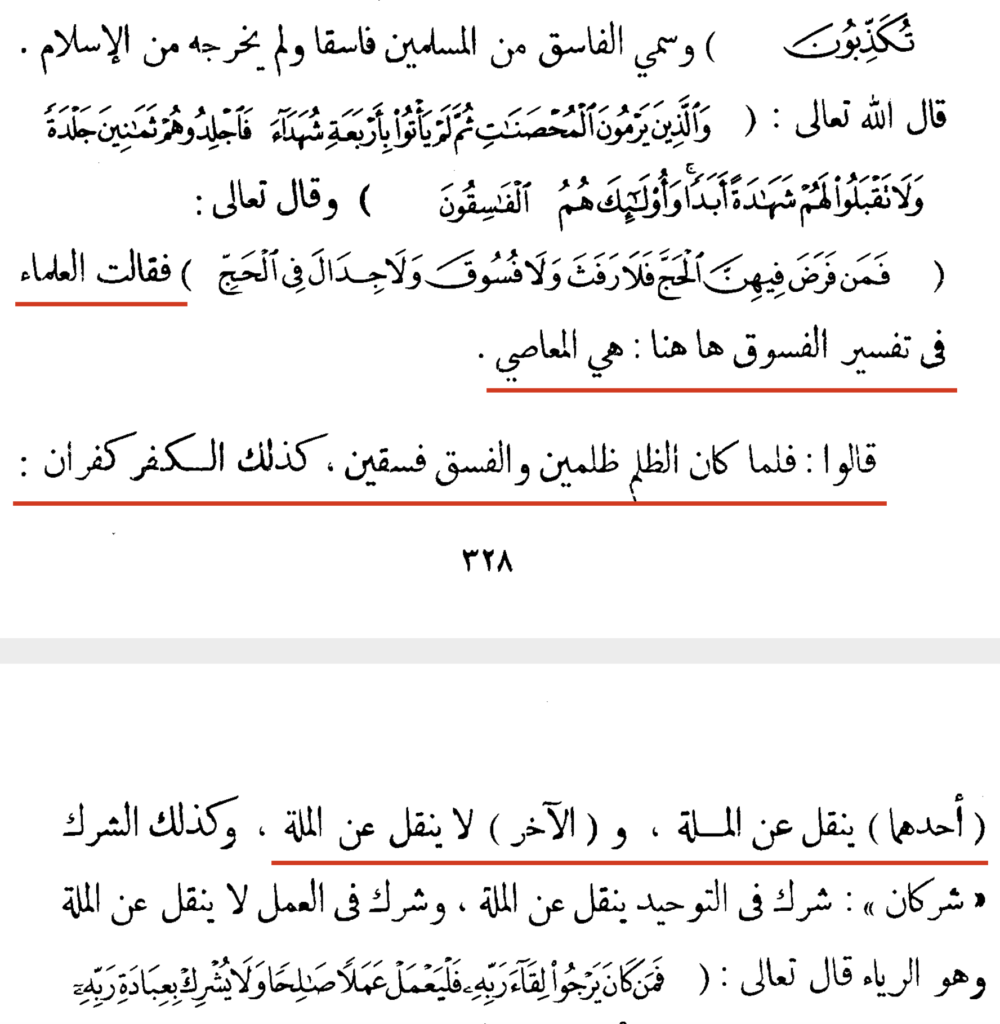 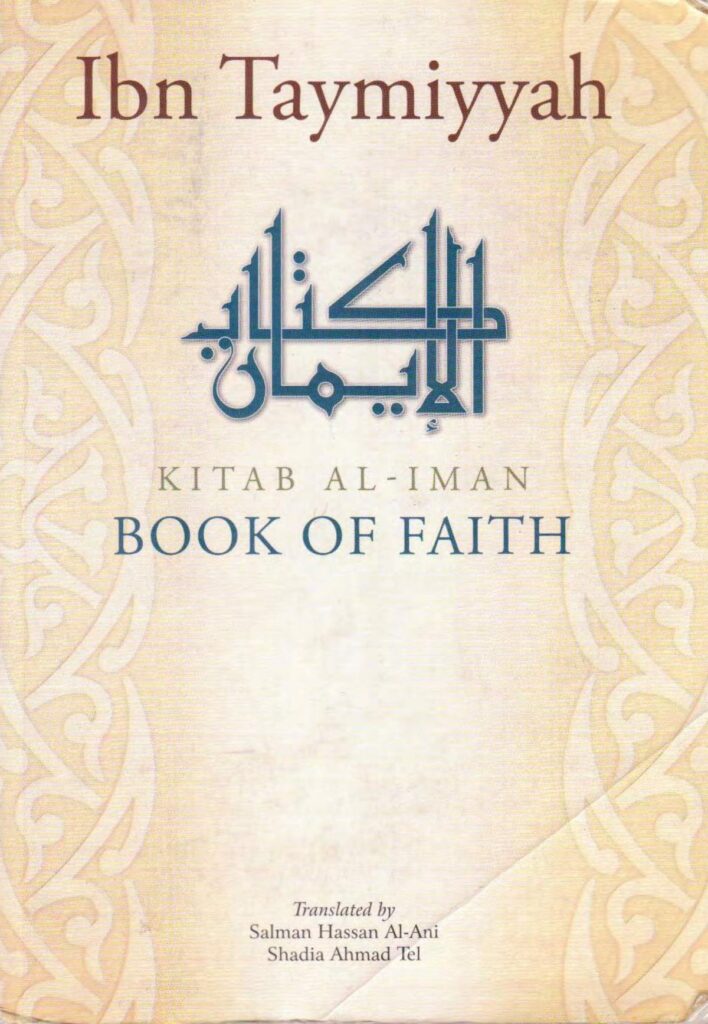 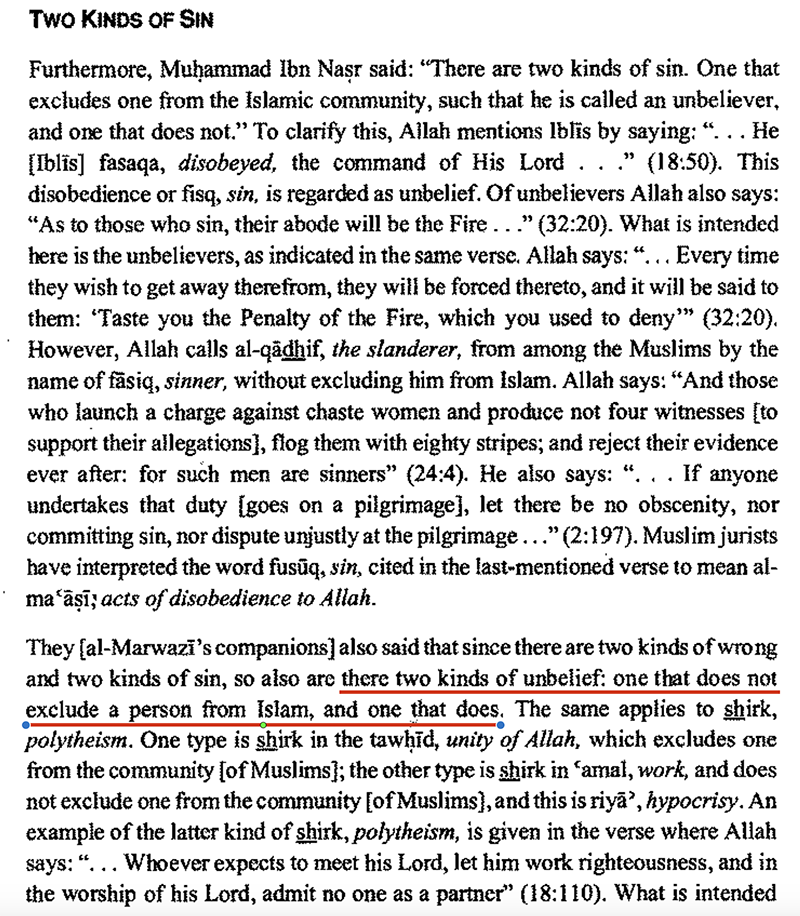 In other words, the word Kufr applied to someone does not automatically mean that that person has left Islam. He may have sinned in a grave way but he has not left Islam. He remains part of the broader community of Muslims and cannot be called a “non-Muslim”. Yet, he may be called a Kafir or one who has denied one of the tenets of Islam, such as belief in the Promised Messiah(as).

The same explanation was given by Hazrat Musleh Mau’ud(ra) when he was directly asked this question by a commission in 1953. He was asked:

“Do you still hold the belief that… all those Muslims who have not pledged allegiance to Mirza Ghulam Ahmad sahib—even if they have not heard the name of Mirza sahib—that they are Kafir and outside the pale of Islam?”

In response to this important question, Hazrat Musleh Mau’ud(ra) said:

“The quotation itself is proof that I call those who I am considering Muslims. Hence, when I use the term ‘Kafir’, I am considering them as the second type of ‘Kafir’ regarding which I have already elaborated, that is, those who are not outside the Millat. When I say that they are ‘outside the pale of Islam’, I am thinking from the perspective that has also been taken in the book Mufridaat-e-Raghib, page 240, where two kinds of Islam are mentioned. One is Doonal Iman (without true faith) and the other is Fauqal Iman (with true faith). Doonal Iman includes those Muslims whose level of Islam is less than (true) faith. Fauqal Iman refers to those Muslims who are at a distinguished level of faith such that they are higher than the ordinary level of faith. That is why when I said that some people are outside the pale of Islam, I was thinking of them as compared to those Muslims who are under the definition of Fauqal Iman. Mishkat also has a narration that the Holy Prophet(sa) said that the person who assists an unjust person and favors him leaves Islam”. [Tehqiqati Adalat mein Jama’at Ahmadiyya ka bayan]

The reference to Imam Ragheb that Hazrat Musleh Mau’ud(ra) has given here is as follows:

“In Shariah, there are two forms of Islam. One of them is Doonal Iman (being without true faith) and it refers to confession of the tongue—regardless if (his) actions follow (his) beliefs or do not follow—and with this the blood of the individual is protected. And this is similar to the statement of Allah (in the Quran): The Arabs of the desert say, ‘We believe.’ Say, “You have not believed yet, but rather say, ‘We have submitted’” [49:15]. The second is Fauqal Iman (being with true faith), and it refers to having belief that is sincerely held in the heart, having loyalty demonstrated through actions, and complete submission to Allah in all that He has decreed, as it is mentioned regarding Hazrat Ibrahim(as) in the statement of Allah (in the Quran): When his Lord said to him, ‘Submit’, he said, ‘I have submitted to the Lord of the worlds’ [2:132]” 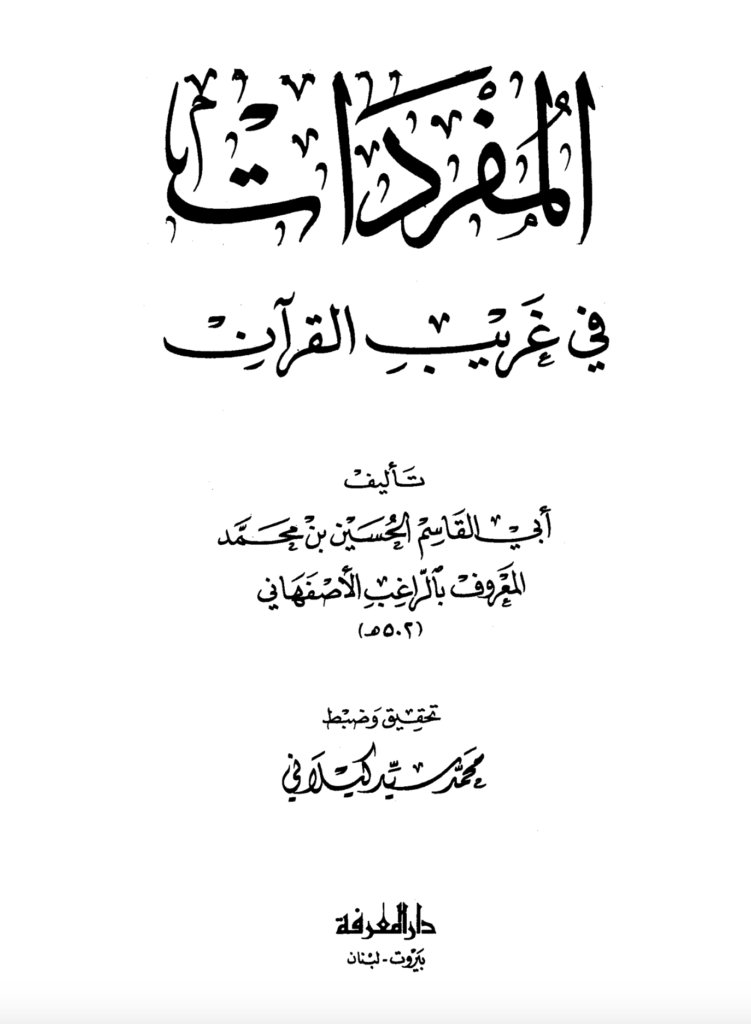 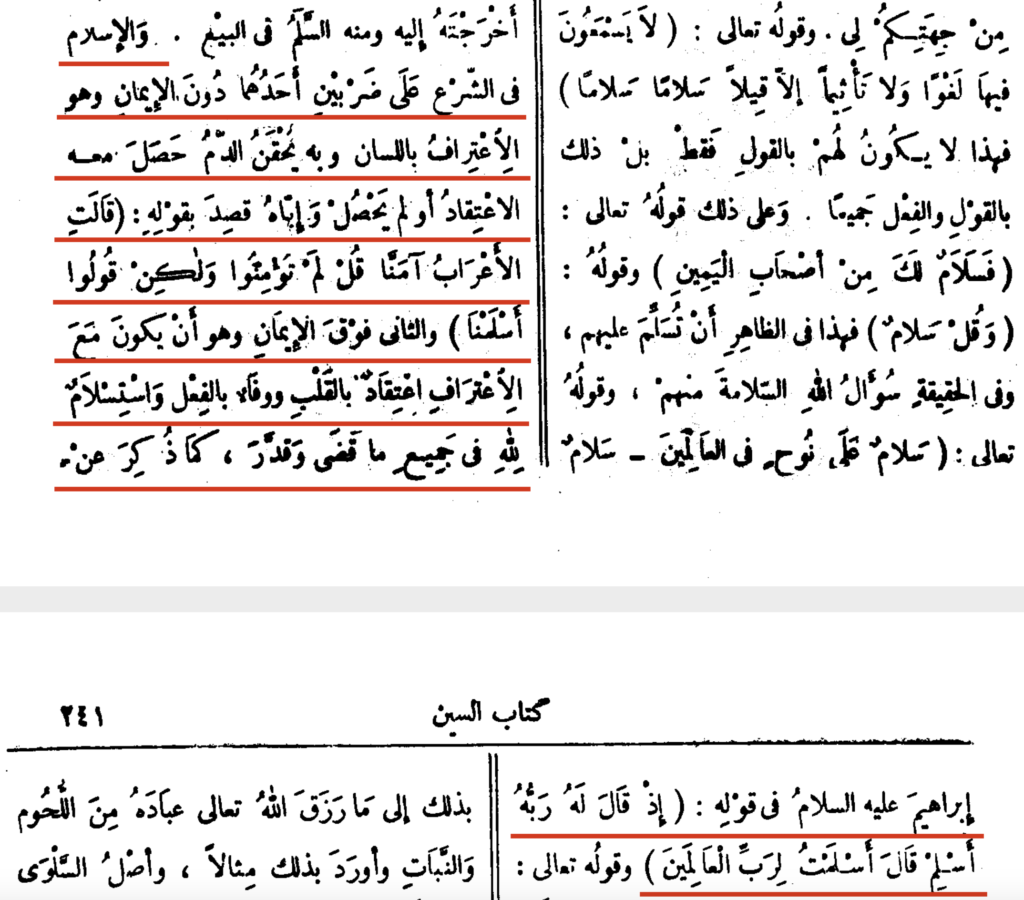 The Arabs of the desert say, ‘We believe.’ Say, “You have not believed yet, but rather say, ‘We have submitted’, for true belief has not yet entered into your hearts.” But if you obey Allah and His Messenger, He will not detract anything from your deeds. Surely, Allah is Most Forgiving, Merciful. [49:15]

In summary, here are the points to remember:

Did Hazrat Mirza Ghulam Ahmad die an objectionable death?
Are Ahmadis Muslim or Non-Muslim? Who decides?
Response to "Flaws in the Ahmadiyya Eclipse Theory"
The Truth About Eclipses
Crucifixion in the Jewish Literature
Go to Top
Start Here
Research
Contact Us
Follow Us
Copyright © 2022 Ahmadiyya Muslim Community. All rights reserved.
Privacy Policy | Use of Cookies | Terms of Service | Sitemap
Start Here