Islam is a religion which requires belief in not only the Prophethood of Muhammad(saw) but all the prophets of God, including Jesus (Qur’an 2:137).

The Holy book of Islam, the Quran, relates in detail the story of Jesus, including his birth, mission as a Prophet to the Israelites, and his crucifixion. Muslims believe that this story is in harmony with the Bible too. Indeed, a whole chapter in the Qur’an is named after the mother of Jesus (Chapter 19 – Maryam).

In Islam, Mary is described as a pious and righteous woman who symbolizes righteous believers blessed with Divine inspiration. Islam then affirms the fatherless birth of Jesus and rejects outright the opposing claim that his birth was illegitimate.

Whereas, Islam recognizes the virgin birth of Jesus as a miraculous event, it does not consider it unnatural; the laws of nature are never broken. It just reflects the inability of man to fully understand the science behind various phenomena observed in nature. Numerous scientists have explained the virgin births.

In Islam, the immaculate conception of Jesus is not interpreted to mean that he was in some way a Divine Being. He was still a human being (Qur’an 19:31).

Islam presents Jesus as a human who believed in the absolute Unity and Indivisibility of God (Qur’an 3:52).

Muslims consider the doctrine of Divinity of Jesus and Trinity as later changes to the teachings of Jesus. The New Testament itself furnishes abundant evidence to show that Jesus was only a human being whom God chose for the reformation of His people, and repeatedly contradicts the Divinity of Jesus. Jesus always referred to himself as having been sent by God (John 17:3) and his followers, too, considered him a man approved by God (Qur’an 19:37; Acts 2:22, John 3:2).

He was undoubtedly called the son of God, but this title has only been employed metaphorically and in fact is used for all the chosen ones of God (Matt 5:9, Exodus 4:22). The literal connotation of ‘son of God‘ as a Divine Being and hence the subsequent development of Trinity Dogma was the result of Hellenistic influences on Christianity as it spread in the Gentile world. The Semitic usage of ‘son of God‘ was misunderstood and forgotten and disputes about the exact status of Jesus erupted, as recorded in the early Church history.

Jesus prayed to God like all other God-fearing individuals (Luke 5:16), and engaged in spiritual exercises such as fasting (Matt 4:2). Furthermore, Jesus lacked knowledge of the future (Mark 13:32), as only the Divine Being possesses perfect and complete knowledge.

The mission of Jesus was confined to the Children of Israel (Qur’an 3:50, Matt. 10:5-6; 15:24). He was commissioned by God to revive the true spirit of the Torah in the hearts of the Israelites and clear any misunderstandings about the Law. He purified and revitalized Judaism. As Jesus was a follower of Moses, he did not change or reject the Mosaic Law. He had come to fulfill the Law (Matt 5:17).

The Holy Qur’an mentions several miracles of Jesus, including his ability to create birds, his ability to cure the leprous and the blind, and raising the dead to life. The ability to create birds is a metaphor meaning ordinary people who accepted the teachings of Jesus were spiritually transformed into birds soaring high into the lofty regions of the spiritual firmament above all worldly concerns. The healing powers can also be understood in the spiritual sense. He restored sight to those people who were spiritually blind, and gave life to those spiritually dead. Jesus specifically referred to the Pharisees of his day as being blind because, among other maladies, they were hypocritical in nature.

Indeed, all reformers from God are spiritual physicians since the disbelievers are deaf, dumb and blind according to Islam (Qur’an 2:19).

The disbelievers of Jesus wished to bring about his death upon the cross for the purpose of calling him accursed in accordance with the pronouncement in Deut 21:23 which declares, “he that is hanged is accursed of God.” His death on the cross would thus confirm him as a false Messiah. Islam contradicts the assertion that Jesus died an accursed death on the cross.

Thus, Ahmadi Muslims believe that God frustrated the plan of the disbelievers of Jesus. Although Jesus was nailed to the cross, he did not perish on it. He was removed from the cross in a state of unconsciousness (Qur’an 4:158). The Gospels, too, provide extensive evidence of his escape from the accursed death on the cross.

According to Islam, Jesus did not preach salvation through atonement of sins by his death on the cross. This philosophy of someone atoning for the sins of another is emphatically rejected in the Old Testament as well (Deut. 24:16, Ezekiel 18:2 and 20).

Ahmadi Muslims believe that Jesus came under the care of his devoted followers after he was removed from the cross. He was placed in the tomb where he recovered from his ordeal. The Gospels too describe that Jesus was still in his earthly body of flesh and bones after emerging from the tomb (Luke 24:39). An analysis of the post-crucifixion period described in the Gospels reveals that Jesus led a low-profile existence. He hurriedly traveled away from the locality of the crucifixion (Qur’an 23:51; Matt 28:10, Mark 16:7).

Migration to the East 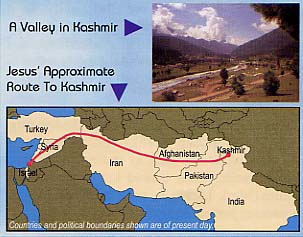 Ahmadi Muslims believe that the physical ascension of Jesus to Heaven is a later interpolation. The term “heaven” is used for spiritual bliss which the righteous enjoy after a mortal life.

Jesus was sent to the lost sheep of the house of Israel (Matt. 15:24). Out of twelve tribes of Israel, only two were in the region where Jesus preached. The other ten tribes, as a result of exile, were domiciled in the eastern countries, especially in Afghanistan and Kashmir. It was imperative for Jesus to migrate eastwards to complete his mission.

There is overwhelming evidence that the people of Afghanistan, Kashmir and neighbouring regions are of Israelite ancestry. Their physical features, languages, folklore, customs, and festivals attest to their Israelite heritage. Evidence also comes from the names they give to their villages, their monuments, and ancient historical works and inscriptions.

The presence of Jesus in India is recorded in the ancient Indian literature, and records of Kashmir. Jesus came to Kashmir from the Holy Land during the reign of Raja Gopadatta (49-109 AD) to proclaim his prophethood to the Israelites. He was known as Yusu (Jesus) of the children of Israel. It is recorded that great number of people recognized his holiness and piety and became his disciples. 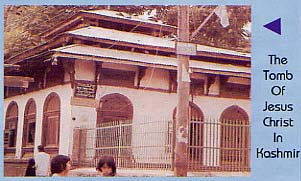 According to Ahmadi Muslims, Jesus’ mission was completed. He died a natural death at the approximate age of 120 in Kashmir, India. (Hadith: Kanzul Imal) The tomb of Jesus, known as the tomb of Prophet Yus Asaf, still exists in the Khanyar quarter of the city of Srinagar, Kashmir. It has been venerated for centuries. The local inhabitants refer to the tomb as Rauzabal, meaning “The Honoured Tomb”.

30 Verses of the Holy Quran which prove the Natural Death of Jesus Christ(as)
Jesus - A Prophet of God
Use of Maut and Wafaat in The Holy Quran
Jesus Christ died a natural death
The Lost Tribes of Israel
Go to Top
Start Here
Research
Contact Us
Follow Us
Copyright © 2021 Ahmadiyya Muslim Community. All rights reserved.
Privacy Policy | Use of Cookies | Terms of Service | Sitemap
Start Here